Flower thrips and whiteflies are major economic pests of tomato and pose considerable threats as vectors of viruses that can result in major crop losses. Growers are faced with increasing challenges as these pests have developed resistance to nearly all classes of insecticides due to overuse. In an effort to develop a sustainable integrated pest management program, studies have focused on conservation biological control for generalist predators of these pests, specifically the minute pirate bug, Orius insidiosus Say.

The addition of non-crop habitat to large, monoculture crops has been shown to aid in the attraction of natural enemies by providing key resources including refuge and alternative food sources such as nectar and pollen. More recently, the biological control concept of "attract and reward" by combining floral resources with herbivore-induced plant volatiles to potentially increase immigration of natural enemies into crops has gained interest. The effects of HIPVs in combination with habitat manipulation on flower thrips and O. insidiosus, however, have not yet been studied in Florida fruiting vegetables.

This study will highlight the potential for implementing "attract and reward" as part of an integrated pest management program for fruiting vegetables and can provide understanding of the complex relationships among flowering plants, insect pests, and their natural enemies. By improving these systems and emphasizing the use of conservation biological control, insecticides and their associated negative impacts on environmental and human health can be reduced while increasing benefits for growers.

Results from the study show that companion plant such as Spanish needles and coreopsis decreased significantly the number of thrips, including western flower thrips. In the absence of sex pheromone, the diminution of thrips is mostly located to the row nearby the companion plant. With the sex pheromone, the decrease of thrips was also observed at the 3rd and 6th row. We also tested Methyl salicylate as a potential attractant for natural enemy, but it did not translate to a reduction in thrips density.

Objective 2: Determine if "attract and reward" can reduce populations of flower thrips in the field.

Objective 3: Determine effects of "attract and reward" on pepper yield and quality in the field.

Peppers used for experiments were acquired from the University of Florida North Florida Research and Education Center’s horticulture department. Wildflower species used in the hedgerows were purchased as seed. All plants were planted in the greenhouse prior to the planting season for peppers in North Florida. Orius insidiosus adults used in the experiments were captured in local areas of low disturbance, and colonies were established with wild-caught flower thrips species as the primary food source, red clover (Trifolium pretense) as a pollen source, and green beans for oviposition.

Field experiments took place in Spring 2019 and Spring 2020 at the North Florida Research and Education Center. Peppers were planted on nine raised beds with plastic mulch in approximately 400-ft rows with 12” spacing. Plots were 20ft long with 10ft spacing between each plot. There were four replicate blocks with 20ft between each block. Treatments included the following: 1) the addition of flowering plants in the field edge and synthetic HIPV lures within the crop, 2) flowering plants only, and 3) untreated control with no flowering plants or HIPV lures. Hedgerows of Bidens alba and Coreopsis leavenworthii were planted in a separate bed on the field edge. In 2019, semiochemical lures were a 1:1 ratio of methyl salicylate (MeSA) in mineral oil. In 2020, semiochemical lures were a 1:1.5 ratio of O. insidiosus sex pheromone blend of 2,7-octadienol and 2-octenal in mineral oil. Lures were 1.5mL microcentrifuge tubes with 3 holes punched through the top to allow volatiles to disperse. In plots with lures, 3 lures were placed in rows 1, 3, 6, and 9 of peppers.

The 2-octenal was purchased by TCI America (Portland, OR). The 2,7-octadienol was synthesized in the laboratory via a protocol developed by Aldrich et al (2007) and revised by the graduate student and Dr. James Hanna at Winthrop University in Rock Hill, SC.

To quantify Orius dispersal and thrips predation, 10 pepper flowers from each treatment plot were collected in rows 1, 3, 6, and 9 of the peppers weekly (2019) or twice weekly (2020) once flowers were present. Flower samples were stored in 70% ethanol and taken back to the laboratory where O. insidiosus adults and nymphs were counted. Flower thrips adults were counted and identified to species, and flower thrips larvae were counted.

Peppers were harvested from each treatment plot to determine any differences in yield and quality between plots with and without attractants. Peppers were graded according to standard USDA grading procedures, and culled fruits were categorized according to the type of injury.

In 2019, methyl salicylate was used as the semiochemical lure. There were no overall effects of adding flowering plants and/or MeSA lures on Orius (F=0.52; d.f.=2; p=0.5962) (Figure 1) or thrips (F=2.48; d.f.=2; p=0.0878) (Figure 2) populations compared to control plots with no flowering plants or lures. There was, however, a significant interaction of row x treatment where higher thrips numbers were found in rows further from the companion plants (F=6.93; d.f.=3; p=<0.0001). Results indicated that the addition of MeSA, which is a general plant defensive semiochemical produced in response to herbivory, did not increase attraction of O. insidiosus in the field, nor did it influence thrips populations.

After analyzing the findings in 2019, the composition of the lures was changed for 2020. The new lures were O. insidiosus sex pheromone comprised of a combination of 2-octenal and 2,7-octadienol, which was found to be attractive to O. insidiosus males in sweet corn in studies done by Aldrich et al (2007). Surprisingly, there were no significant differences among treatments for O. insidiosus (F=1.72; d.f.=2; p=0.1827) (Figure 3). There was, however, significantly higher number of O. insidiosus in row 1, closest to the companion plants compared to row 9, furthest away from the companion plants (F=4.59; d.f.=3; p=0.0041). Interestingly, there was a significant reduction in the number of thrips with the addition of companion plants and the lures compared to the control in Row 1 and row 6 (F=4.43; p=0.0134) (Figure 4). Thrips populations increased in all treatments at row 9 (F=32.58, d.f.=3; p=<0.0001). 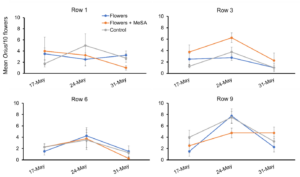 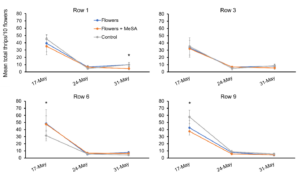 Figure 2. Mean number of Frankliniella thrips adults and larvae (±SEM) per 10 pepper flowers in the a) first, b) third, c) sixth, and d) ninth row of peppers in 2019. 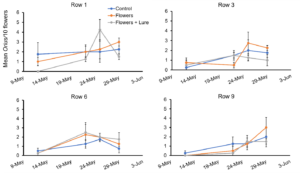 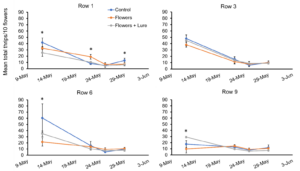 Figure 4. Mean number of Frankliniella thrips adults and larvae (±SEM) per 10 pepper flowers in the a) first, b) third, c) sixth, and d) ninth row of peppers in 2020. 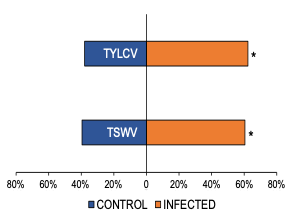 Although O. insidiosus populations in the field were not increased with the addition of the MeSA or sex pheromone lures, thrips populations were significantly lower in the plots with companion plants and predator sex pheromone lures, possibly indicating that thrips could be repelled by the pheromone due to the supposed presence of predators. It is also possible that the sex pheromone, while attractive to O. insidiosus, does not result in arrestment and stimulation to search the area for prey, and therefore, retention remains unchanged. The lack of response by O. insidiosus to the species-specific sex pheromone may also suggest that concentrations were not high enough, or there could be additional semiochemicals that may need to be present.

It could also be suggested that future studies investigate different semiochemicals as potential lures for O. insidiosus such as prey alarm pheromones or pathogen-induced plant volatiles. In addition to the field study, olfactometer assays were conducted to investigate the responses of O. insidiosus females to virus-infected tomato plants. Females were given a choice between a TSWV- or TYLCV-infected plant and a healthy, control tomato plant. A significant difference was observed between the proportion of O. insidiosus that chose the infected plants over the uninfected control plants (Figure 5). Once the volatile compounds are identified using GC-MS, it is possible they could be tested as potential attractive lures.

We are currently working in publishing the results from this study in the peer review journal Biological Control. The student Iris Strzyzeswki will present her research at the Annual meeting of the Entomological Society of America.

Additionally, a sustainable vegetable production workshop will be held on October 21, 2021, to present and educate the community about research findings from this project amongst others. The workshop has been organized by the graduate student and will include lectures, hands-on activities and demonstration plots. Approximately 100 attendees have registered and include growers, private industry personnel, extension agents, and other researchers.

Results from this study provided new knowledge regarding the implementation of carefully selected flowering plants in combination with HIPVs that can be used to attract and conserve natural enemies of major insect pests of organic fruiting vegetables for North Florida and near regions. this new knowledge will help to reduce the costs of pest management and improve profitability for organic growers. Identification of two companion flowers that significantly reduced thrips population was a major finding. Also, the fact that adding attractive pheromone to the plot increased thrips population at higher distance from the companion plants was an important finding. Identification of better attractants for thrips natural enemies will be the focus of our future research.

We believe that growers could benefit from our research by adopting the addition of flower strips along vegetable crops in order to maintain thrips population at a low level. If thrips population are controlled, needs of insecticide spray is reduced, which can translate in a significant reduction in operating costs. In addition, these companion plants provide additional resource for pollinators that may contribute to a yield increase at the field scale.

This project makes me realize that sustainable agriculture requires al lots of research. It may seem simple at first sight to add flowers on the border of a field to increase density of pollinators and natural enemies, but a lot of parameters need to be considered. For instance, the planting time is important as we want to have the companion flowers to bloom at the same time than the crop. Also, it is important to consider that the flowers are not alternative host for our pest and provide also nutritional benefit to our natural enemies. Similarly, we found that using semiochemical is quite challenging. Attraction observed in the lab may not be seen in the field due to the interactions with other abiotic factors.

However, it was very encouraging to observe thrips decrease during the 2nd year of our experiment, without the use of conventional insecticide. Also, I was happily surprised to realize that not only organic, but also conventional growers are interested in these methods.

Methyl salicylate that is commonly use in some predator attractants did not prove to be efficient in recruiting predators against western flower thrips.