With the recognition that agro-ecosystems are highly interconnected and multifaceted, a major challenge facing agriculture is preserving and improving honey bee health.  Stress associated with transportation, nutritional consequences, various diseases and pests have all been recognized as potential factors in honey bee decline.  However, intracolony genetic diversity has been shown to result in increased colony survival and productivity through various mechanisms.  At the population level, genetic diversity serves as the raw material for selective breeding in agriculturally important plants and animals, including the honey bee.

Honey bees are native to the Old World and only a small fraction of this original population was ever introduced into the U.S.  The importation and founder events associated with the establishment of honey bees in North America represent a series of genetic bottlenecks that have limited the diversity of introduced honey bee populations.  These bottlenecks include: the limited size of founding populations, parasitic mite reduction of U.S. honey bee populations (managed and feral), and ongoing production of queens from a small number of queen mothers.

The goal of this project was two-fold: perform a comprehensive analysis of genetic diversity of Old and New World honey bee populations, and secondly, educate beekeepers (from backyard beekeepers to large-scale commercial operations, and major queen producers), through a variety of outreach tools, regarding the benefits of genetic diversity in honey bee populations.  Our results indicate that although U.S. honey bee populations are less genetically diverse than their Old World progenitors, losses in alleles through time were mitigated by the incorporation of Old World germplasm, thereby increasing overall allelic richness of U.S. queen producer populations.

Taken together, these results indicate the Old World could not only serve as a genetic reservoir to access additional genetic diversity, but could allow for the long-term adaptability of honey bees by providing a broader genetic basis from which to select and breed for more locally adapted bees with improved apicultural traits.

Honey bees are at the center of modern agricultural production, contributing 14.6 billion dollars annually in pollination services alone (Morse and Calderone, 2000).  As a single crop, almonds represent $2 billion annual industry in California and production relies almost exclusively on honey bee pollination.  As such, nearly half of all managed colonies must be seasonally transported across the country to meet the demands required for successful pollination.  Under natural conditions, honey bees are highly polylectic and visit a variety of floral types.  Shifts in agricultural practice toward ever larger monocultures, sequential placement on crops, and reduced alternative foraging opportunities, however, has led to major seasonal dietary limitations for the honey bee.

Although honey bees are now distributed worldwide, the species (comprised of 28 recognized subspecies) is endemic to the Old World (Meixner et al., 2011; Sheppard and Meixner, 2003; Sheppard et al., 1997). A small number of these subspecies were imported to North America, primarily between 1622 and 1922, and formed the genetic underpinning for current U.S. honey bee populations (Sheppard, 1989a).

Genetic diversity of the honey bee at the colony level has been shown to play a key role in colony fitness and overall health.  Increased colony diversity is associated with lower disease intensity, increased disease resistance, greater workforce productivity, and thermoregulation stability (Mattila and Seeley 2010; Hughes et al., 2008; Seeley and Tarpy, 2007; Jones et al., 2004; Tarpy 2003).  Unfortunately, the importation and founder events associated with the establishment of honey bees in the U.S., coupled with the current queen production methods, represent a series of genetic bottlenecks that have reduced honey bee genetic diversity at the population level.  These bottlenecks include: the limited size of founding populations introduced into North America; mite-mediated reduction of North American honey bee populations and elimination of feral sources of genetic variation; and annual commercial production of queens from a small number of queen mothers (Schiff and Sheppard, 1995; Delaney et al., 2009; Seeley, 2007).  The U.S. Honey Bee Act (1922) established restrictions on the importation of honey bees into the United States, resulting in over 90 years of domestic bee breeding without the incorporation of significant new genetic material.  Only with the exception by the United States Department of Agriculture (USDA) can honey bees be imported for experimental or scientific purposes (Public Law 94-319).

Recent improvements in the long-term storage and cryopreservation of honey bee semen has led to the successful instrumental insemination of honey bee queens.  As permitted by APHIS and USDA, the Sheppard Lab has been involved in the collection of Old World germplasm since 2008, and its experimental use in breeding has been underway over the last few years.  The suplementation of Old World cryopreserved germplasm in a select few U.S. queen producers is currently underway as a means to increase genitive diversity of their populations.

To perform a comprehensive analysis of the genetic diversity of Old and New World honey bee populations and develop an outreach plan to communicate these findings, three main objectives were addressed over the course of this project.

Objective 1.  Assess the genetic diversity of honey bee populations from a representative sampling of Old World honey bee subspecies sampled from their native range and compare this to “strains” currently available in the United States:

The genetic diversity of three Old World subspecies (A. m. ligustica, A. m. carnica, and A. m. caucasica) originating from Italy, Slovenia, Georgia, and Turkey were assessed using microsatellite analysis.  These subspecies are a realistic representation of what was originally brought to and established here in the U.S.  To analyze U.S. populations, honey bee samples from major commercial queen production operations in California and Hawaii were assessed in addition to several feral populations.

Honey bee samples from several major commercial queen production operations in California and Hawaii were sampled in 2015.  Previous estimates of genetic diversity in commercial stock by Delaney et al. (2009) used samples collected from 1993-1994 and 2004-2005.  Specifically, queen producer populations sampled in 2015 (QP 2015) will be compared to those used by Delaney et al. (2009) in 2004 (QP 2004) and 1994 (QP 1994) to determine if there has been a change in allele frequency over time.  Additionally, as permitted by APHIS, several California commercial queen producers have incorporated Old World germplasm into their breeding programs in recent years.  Therefore, samples from 2015 include both queen producers who have incorporated Old World germplasm into their breeding programs compared to those that have not.  These two populations will also be compared as a means to evaluate the impact of germplasm releases on genetic diversity and sustainable bee breeding.

Objective 3.  Bring awareness to the genetic diversity of honey bees and its importance in sustainable agriculture and beekeeping practices:

We will distribute our findings through our extension program, local and national meetings, WSU workshops and beekeeping short courses, and publication via peer-reviewed journals and interviews and fact sheets.

The evaluation of differences in genetic diversity among the source and introduced populations was to be used to make recommendations to beekeepers and queen producers to maximize genetic variation in the stocks from which they make their selections.  Further, due to the negative consequences of inbreeding, our results will also provide a means for the queen producers to assess the genetic underpinnings of their particular stocks.

Worker samples.  All Old World samples were obtained from prior collecting trips and stored in the Sheppard lab.  Samples from each queen mother colony from California and Hawaii commercial queen breeders represent those that are currently sold to beekeepers across the United States.  All California and Hawaii samples were stored in 95% ethyl alcohol and Old World samples were stored at -80°C.  After communicating this proposed research to various beekeeping groups, several citizen scientists sent me a number of feral samples of honey bees with collection date and locality information representing sample sites from Georgia, Utah, Nevada, Arizona, and California.

Statistical analysis.  Allele frequencies for each population were summarized in GENETIX version 4.05 (Belkhir et al., 2004)..  Observed allelic richness (ag) and unique alleles in a given population were simply tallied using HP-RARE v. June-6-2006 (Kalinowski, 2005).  Mean number of alleles per locus and range of alleles was summarized using GENEPOP web version 4.2 (Raymond and Rousset, 1995).  Paired t-tests for the number of alleles at each locus for each population were used to determine significant losses or gains in allelic diversity between any two populations compared.

Maintaining genetic diversity is critical towards the development of stronger, healthier, disease and mite resistant honey bees.  Current methods of in-hive treatments and pesticide applications are costly and futile given the adaptive nature of biological systems.  This research is the first of its kind to assess genetic diversity of honey bee populations on such a large scale.  Additionally, to date no research has been conducted on the assessment of U.S. honey bee populations since wide spread reports of CCD and could therefore become an increasingly valuable resource for future research.

Objective 1.  Assess the genetic diversity of honey bee populations from a representative sampling of Old World honey bee subspecies sampled from their native range and compare this to “strains” currently available in the United States:

Objective 3.  Bring awareness to the genetic diversity of honey bees and its importance in sustainable agriculture and beekeeping practices:

Results for Objective 3 are discussed at length in the Publication and Outreach section below.

We will distribute our findings through our extension program, local and national meetings, WSU workshops and beekeeping short courses, and publication via peer-reviewed journals and interviews and fact sheets.

Figure 1.  Pictures of two feral honey bee colonies on a single cliff in Wenatchee, WA (2016) that according to the photographer, have been in existence prior to 2001 (Photos courtesy: Chris Church, 2016). 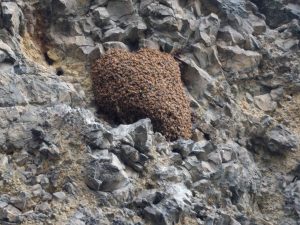 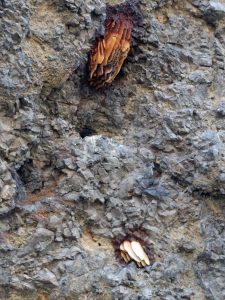 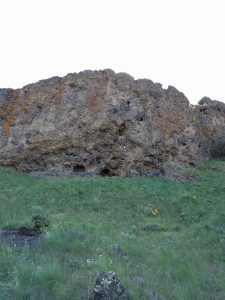 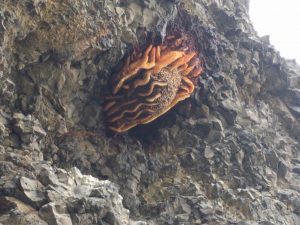 Our lab recently gave tours of our current research facilities to a several stakeholder and private donors.  During these meetings/guided tours, not only was the significance of this research discussed at length highlighting the pivotal role genetic diversity plays in the health of honey bees, but this time was also used to increase the awareness of bee research in general.  Even our university’s provost wore a “bee beard” to support our lab’s research and raise awareness of the importance of bee research in general. 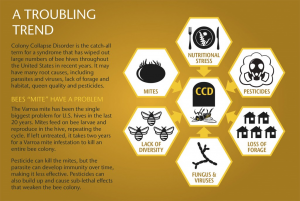