Leaffooted bugs are significant pests of tree nut crops in California. In almond and pistachio, feeding damage can lead to epicarp lesions, kernel necrosis and stigmatomycosis. Given the pest’s rapid and unpredictable colonization into orchards, and lack of effective monitoring tools to detect such migrations, growers rely extensively on pesticides to control these insects, commonly at first perceived risk of pest activity. This management approach is both economically costly and environmentally unsustainable. In 2018-19, our group initiated a collaborative project with a large nut producer to explore the use of summer cover crops as an integrated pest management (IPM) strategy for large hemipteran pests. Here, we assessed the influence novel, irrigated strips of ground cover in both reducing pest damage and increasing biological control of leaffooted bug. Building from preliminary findings, ground covers will be selected that are attractive to leaffooted bugs, but also provide nectar resources for its primary parasitoid, Gryon pennsylvanicum. In this way, covers may provide multiple services, including (1) act as a trap crop to hold leaffooted bug away from the crop canopy, and (2) provide flowering resources for key natural enemies of these pests. Partnering with UC Cooperative Extension and collaborating producers, our finding will be disseminated to relevant stakeholders, producers, and the academic community to address a growing need in California tree nut IPM. Improved methods in leaffooted bug management will reduce pesticide application costs, as well as environmental costs derived from the overuse of insecticides in California tree nut crops.

Evaluating the biological and reproductive traits for prominent leaffooted bug parasitoid G. pennsylvanicum will provide fundamental insight to the wasps prospects and potential limitations as a successful biological control agent to L. zonatus in California orchards. We will use these results to evaluate findings under greenhouse and field conditions.

Understanding the influence nectar provisions from candidate trap plants have on G. pennsylvanicum life parameters will provide insight to the role ground covers have on this key natural enemy. Influence of nectar feeding from trap plants will be compared to optimal sugar diets.

Objective 3: Evaluate the influence of ground covers on biological control of leaffooted bug and crop damage.

(3A) Monitor seasonal abundance of leaffooted bug and their key natural enemies in nut orchards with and without trap crops.

Assessing the spatiotemporal abundance of leaffooted bugs and their natural enemies in plots with and without trap crops will provide insight to the efficacy of trap cropping for (1) luring and holding the pest away from the canopy and (2) supporting natural enemy populations.

(3B) Assess parasitism of leaffooted bug in plots with and without trap crops.

Using sentinel egg masses, we will measure parasitism and predation rates in the presence and absence of ground covers. Natural enemy abundance measured in 3A will be compared to the degree of biocontrol observed in plots.

Quantifying insect damage provides the ultimate measure of whether trap cropping can be a viable pest management tool in nut crops. We will compare leaffooted bug feeding damage to nuts in plots with and without trap crops.

To measure adult longevity and fecundity of G. pennsylvanicum, newly emerged (<24 h) males and females (n=120) individuals were housed in mating pairs in 10ml plastic tubes closed with a mesh cap. Tubes with mating pairs were randomly assigned to one of the following treatments: a) water and 25 fresh (<72 h) L. zonatus eggs (“water & host”; n=20), b) honey-water solution and 25 fresh host eggs (“honey-water & host”; n=20), or c) honey-water solution and no host eggs (“honey-water”; n=20). Dietary treatments (water or honey-water solution) and host eggs were replenished every other day until the female wasp expired. A new male specimen was introduced to the tube to replace any expired males to maintain copulation potential throughout the study. Following 24hr exposure to the parasitoids, host eggs were removed and observed daily for the occurrence of parasitoid emergence or L. zonatusnymph hatch. Eggs that neither hatched nor yielded a parasitoid were dissected to look for the presence of a dead L. zonatus or dead G. pennsylvanicum, and were determined aborted if neither occurred. Observations on age-specific survival, longevity and fecundity were used to calculate life table parameters for G. pennsylvanicum on host L. zonatus (rm, intrinsic rate of increase; λ, finite rate of increase; T, mean generation time; Td, doubling time; R0, net reproductive rate; GRR, gross reproductive rate).

Effects of candidate trap crop species on the fecundity and longevity of G. pennsylvanicum was assessed (Fig.1). Newly emerged G. pennsylvanicum individuals, one male and one female, were placed together in a rearing chamber containing the inflorescence of one of the following diet treatments; mustard, buckwheat, cowpea, oat, sunflower, water-only, or honey-only. The stem of each inflorescence was submerged in a container of water with the rearing chamber, and replaced every other day to ensure nectar availability to wasp. After 24hr of exposure to diet treatment, a set of 25 leaffooted bug eggs (<72hrs old) were provided for parasitism. Eggs were replaced every other day until the female parasitoid expired. A new male specimen was introduced to the rearing chamber to replace any dead males and maintain copulation potential throughout bioassay. Following exposure, leaffooted bug eggs were removed and observed daily for the emergence of either parasitoids or leaffooted bug nymphs. Observations on age-specific survival, longevity and fecundity will be used to calculate life tables for G. pennsylvanicum. 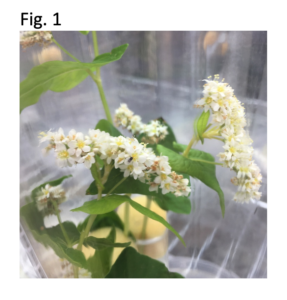 After preliminary trials and conducting a literature review in regards to attraction to hemipterans, beneficial biological control agents, as well as feasibility for use in pistachio systems, it was decided to test four different plant species in ground cover treatments: oat, mustard, cowpea, buckwheat, and sunflower. Strips containing resident weedy vegetation was used as controls. To test the role of selected treatment ground covers, we used a randomized block design containing five replicate blocks with six plots each (30 plots total). Each plot contained three consecutive rows wide with 180 trees per row (Fig. 2-3). All ground cover treatments were seeded at the beginning of March 2020. Sampling of insects took place every 2-weeks between April – October 2020. Ground covers were sampled with 15” sweep nets (5 sets of 30 sweeps per plot) and measurements of ground cover height, biomass, and phenological stage were recorded. Pest and natural enemy abundance in the canopy were monitored using beat sampling (5 sets of 60 beats per plot). Each beat sample consisted of an aggregate sample from 20 trees. Each tree was struck three times with a ½” PVC pipe while holding a sweep net below, where insects fall from the canopy into the sweep net. All insects from the sweep and beat samples were identified to genus or species. Yellow sticky-traps were also be used to monitor pest and natural enemy abundance. Three pairs of sticky-cards were used in each plot, and were positioned at every 20th tree along the center row of each plot. For each pair, one trap was positioned in the crop canopy (approximately 2.5m from the ground) and the other along the ground vegetation (approximately 0.25m from the ground). Traps were collected every two weeks and all insects identified to genus or species. 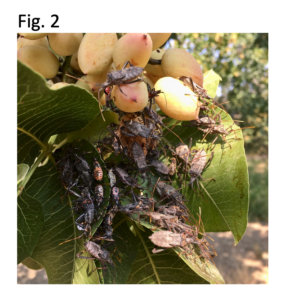 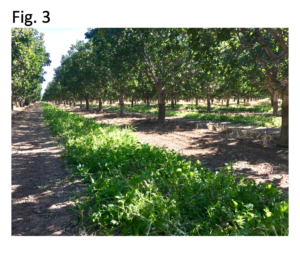 To assess biological control, sentinel leaffooted bug egg masses (< 72 hrs old) were placed in the crop canopy once a month (Fig. 4). After 3 days of exposure, sentinel eggs were collected and held under controlled laboratory conditions. All emerged parasitoids were identified to species and their abundance recorded. All sentinel eggs remaining were counted, and any destroyed eggs will be presumed to be damaged by a predator. Remaining eggs which neither hatched nor produced a parasitoid was dissected to verify whether they contained a dead parasitoid, dead leaffooted bug, or determined aborted. 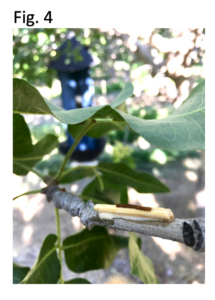 At harvest, individual plots with and without the ground covers will be commercially harvested and subjected to commercial grading in processing facility. This is considered the most realistic measure of crop damage and the most relevant to growers. 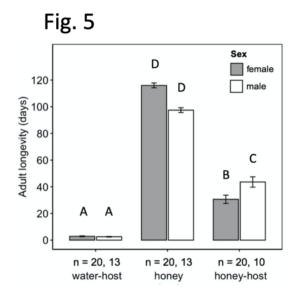 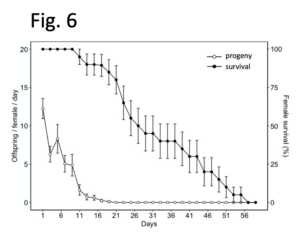 This work is currently pending. 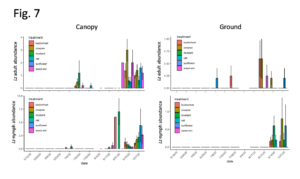 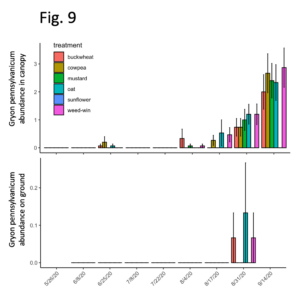 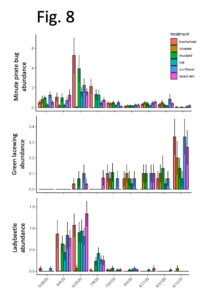 Rates of biological control ranged across the pistachio growing season (Fig. 10). Parasitism was only observed in mid-September in plots containing ground covers buckwheat, sunflower and weedy vegetation. Gryon pennsylvanicum and generalist parasitoid Ooencyrtus sp. were the only two wasps to emerge from leaffooted bug sentinel eggs. There were seasonal trends in leaffooted egg predation, with peak predation events recorded in late-June. While statistical analyses are pending, preliminary observations would suggest that parasitism and predation of leaffooted bug eggs was not significantly different between ground cover treatments. 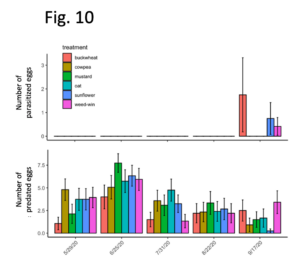 While statistical analyses are pending, preliminary observations would suggest that crop damage indicators conducted at harvest did not show notable differences between ground cover treatments (Fig. 11). 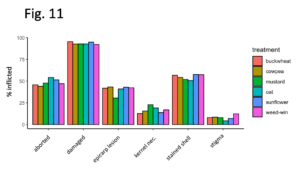 We also aim to publish UC Extension bulletins and semi-technical pamphlets to disseminate our findings to the grower community. Information generated will be shared with other researchers through presentations at other professional meetings such as the regional and national meetings of Entomological Society of America. Finally, our findings will be published in peer-reviewed journals such as Biological Control, Journal of Economic Entomology and Environmental Entomology.

Did this project contribute to a larger project?:
No
Knowledge Gained:

This work is currently pending.