More frequent mega-wildfires reshaping Great Basin plant communities, endangering native perennial grasses that are a key source of forage for livestock. Predicted increase in the frequency of drought and ongoing invasion by cheatgrass (Bromus tectorum) will exacerbate the impact of wildfires in the Great Basin. Post-fire seeding has become a common practice to restore degraded lands to native perennial grasslands, but whether restored communities will persist in the future is unknown. Our research aims to understand how forward-looking post-fire seeding can promote resilient rangelands in the Great Basin, which can safeguard the economic viability of ranching and the quality of life of ranchers from catastrophic wildfires. We assess the capacity of current seeding practices and potential seed source modification to withstand future drought and invasion. First, we survey vegetation in the boundaries of a large fire to determine the effects of post-fire seeding and landscape dispersal on the species and genetic diversity of restored communities. Second, we use a common garden approach to understand how seed provenance and species traits alter the response of native grass populations to cheatgrass and drought. Our research will provide practical recommendations on where and what to plant in future post-fire restoration. We will disseminate results to ranchers and public land managers in Oregon and Idaho via field workshop, oral presentations, and newsletter articles. We expect increase in stakeholders’ knowledge about the effects of current post-fire seeding practices on plant diversity and the selective seed sourcing strategy to adapt to future drought and cheatgrass invasion.

Research objective 2: Evaluate where on the landscape to prioritize post-fire seeding for native vegetation recovery in burned areas.

Research objective 4: Understand the relationship between the drought tolerance and cheatgrass resistance traits of native grasses.

Education objective 1: Ranchers and land managers in the Northern Great Basin learn how current post-fire seeding practices affect the resilience of rangelands and how selective seed sourcing can aid in the adaptation to future drought and cheatgrass invasion.

Education objective 2: College and high school students in Oregon will learn about the importance of post-fire rangeland restoration.

Education objective 3: Range and restoration professionals will learn how the concept of pre-emptive restoration can be applied in post-fire seeding of arid rangelands.

Here we highlight the milestones we plan on achieving between September 2021 and August 2023:

Education Objective 1: Aoyama will report back to Mr. Hoagland, the collaborating producer, quarterly. The team will develop the field workshop material by March 2023, publicize the event in April-May, and host the event on June 2023. Mr. Hoagland and Aoyama will design and print out the brochures by February 2023 and give talks at the Oregon and Idaho Cattlemen’s Association meetings and at the BLM Owyhee and Burns field offices in spring 2023. Education Objective 2: Aoyama will co-instruct a field ecological methods course at the University of Oregon in winter quarter of 2022. Aoyama will recruit and mentor at least two undergraduate students between September 2021 and August 2023. Aoyama will lead a native plant restoration module in range camps in June 2022 and June 2023. Education Objective 3: Aoyama will give talks at the Society of Range Management annual meeting in February 2023 and the Society of Ecological Restoration conference in July 2023. The team will submit Manuscript 1 by November 2022 and Manuscript 2 by March 2023. Aoyama will set up a website by October 2021 and keep our research and outreach pages up to date.

Objective 2. Evaluate where on the landscape to prioritize post-fire seeding for native vegetation recovery in burned areas. We predict that dispersal will increase recovery of native species and genetic diversity closer to fire edges, making post-fire seeding more important farther away from the fire edges. Wind dispersal of seeds from unburned areas is the natural process of post-fire recovery in burned areas (Damschen et al. 2014). Seed dispersal exponentially decreases with distance to the nearest seed source or fire edge (Nathan and Muller-Landau 2000). Therefore, in large wildfires, seeds may not reach some burned areas because the distance between unburned areas may be too great for the seeds to disperse. Post-fire seeding attempts to overcome this seed limitation (Foster and Tilman 2003). The effect of seeding on plant diversity may depend on distance from the nearest fire edge. We expect post-fire seeding in the core of these large burns will be most helpful for maintaining a resilient landscape. Our hypothesis will be supported if the effect size of seeding (difference in species and genetic diversity between seeded and unseeded areas) increases with distance from the nearest fire edge. 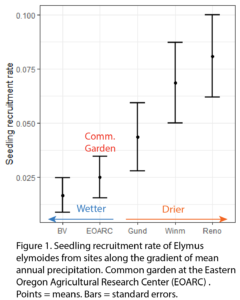 We expect that this effect is associated with more conservative traits (such as higher water use efficiency) in these populations. A plant trait-based approach using simple-to-measure aboveground traits has been successful in explaining trait-by-environment associations across species (e.g., Baughman et al. 2019, Basey et al. 2015). We will test the association between seed provenance, plant traits, and drought survival. Our hypothesis will be confirmed if southern populations have higher water use efficiency, lower water stress, and higher survival rates than northern populations under drought.

Objective 4. Understand the relationship between the drought tolerance and cheatgrass resistance traits of native grasses. Keeping cheatgrass at bay is important because we expect a tradeoff between drought-tolerant and cheatgrass-resistant traits will decrease survivorship of native grasses under combined drought and invasion. Drought-tolerant individuals have resource-conservative traits (e.g., high water use efficiency (Farquhar et al. 1989) and low growth rates (Craine et al. 2012)) to save energy. In contrast, cheatgrass-resistant individuals are known to have resource-acquisitive traits (e.g., early phenology and high growth rates (Leger et al. 2019)) to compete with annual grasses that emerge in winter and senesce by summer. However, the competitive outcomes for restored natives vs. cheatgrass under contrasting precipitation conditions are still unknown. Understanding the trait association with seedling performance under drought and invasion would inform practitioners which native species and population to use for pre-emptive seeding practices depending on the extent of cheatgrass invasion or the likelihood of future drought in the area. Our hypothesis will be supported if native seedling survival rate increases with drought-tolerance traits under drought but decreases under drought and invasion, and vice versa.

RESEARCH METHODS AND MATERIALS. We will test our hypotheses using two approaches: (1) a Survey where we measure plant diversity at a community and population level in a previously burned area; and 2) a Common Garden Experiment where we measure intraspecific variability in native grass response to drought and cheatgrass treatments.

Sampling design. Our survey took place in Soda Fire, where over 280,000 acres of rangelands burned at the border of Oregon and Idaho in 2015 (MTBS; Fig. 2). 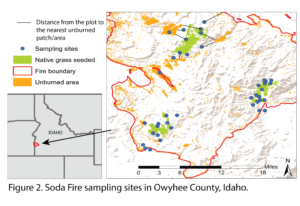 Methods. We collected plant composition data and leaf samples of bluebunch wheatgrass at all 40 plots in June 2021. Each plot was delineated by a 10 x 10 m relevé, where number of species is recorded for species richness. Occurrence of each plant taxon was measured every 0.5 m on four 25-m transects radiating from each corner of the relevé using the point-intercept method, and evenness was calculated. Leaf samples were collected from 25 individuals at each plot (n = 1350), then air-dried and stored at -80F. We isolated DNA from plant tissues using a modified cetyltrimethy ammonium bromide (CTAB)-based method (Aboul-Maaty and Oraby 2019). We amplifed small quantity of DNA with polymerase chain reaction (PCR) assay using ten known primers for bluebunch wheatgrass (Bushman et al. 2008). To measure genetic diversity of bluebunch wheatgrass populations, we used a genotyping service at the Center for Genome Research and Biocomputing at the Oregon State University to obtain microsatellite data in Fall 2021. With the microsatellite data, nucleotide diversity (π) was calculated as a metric of genetic diversity at the population level.

Analysis. We will use ANOVA to test the combined effect seeding on overall species diversity (species richness and evenness) and the genetic diversity (π) of bluebunch wheatgrass, with burned-seeded and burned-unseeded as explanatory variables. To test how seeding effects change with landscape dispersal, we will assess the log response ratio of species and genetic diversity to seeding (burned-seeded/burned-unseeded), and regress these log response ratios against distance from the nearest fire edge in linear models.

Objective 3 & 4: Common Garden Experiment. Experimental design. In October 2019, we established a sagebrush steppe common garden experiment at the Northern Great Basin Experimental Range in Burns, OR. We nested seeding treatments (2 native species x 6 seed provenances) within a factorial design that crosses rainfall (ambient, 50%, 80% reduction) by competitive environment (with and without cheatgrass). We burned the site prior to implementation to mimic post-fire conditions. The experiment is replicated 8 times in a random block design (48 total 1.5 m x 1.5 m plots with nested 25 cm x 25 cm subplots). Precipitation is manipulated using fixed rainout shelters that passively reduce precipitation by a constant percentage (Gherardi and Sala 2013, Knapp et al. 2016). Aluminum flashings are inserted 35 cm deep around the shelters to limit plant roots from accessing water outside the treatment. To account for microclimates from rainout shelters, soil moisture sensors and air + soil temperature sensors are installed year-round. In March 2020, we raked existing vegetation and sowed 20 seeds of bottlebush squirreltail (Elymus elymoides) and Sandberg bluegrass (Poa secunda) from six populations in each subplot. These are desired forage species commonly used for restoration. Bluebunch wheatgrass was not sown because not enough seeds were collected across the climatic gradient to make a meaningful comparison. In July 2021, we added 200 cheatgrass seeds in each competition plot. Seeding of cheatgrass was delayed because cheatgrass usually does not increase until the second year following fire (West and Yorks 2002).

Methods. In July 2021 and 2022, we measured survival rates of seedlings and morphological traits related to growth rate (Perez-Harguindeguy et al. 2013): height (cm), SLA (cm2/g), and LDMC (g/g). In July 2021, we collected leaf samples and process them (dry and grind) for a carbon isotope ratio analysis at the Stable Isotope Laboratory at the University of Oregon. The ratio of carbon isotopes (13C/12C) indicate carbon gain per unit water loss, which is a measure of water use efficiency (Diefendorf et al. 2010).

Analysis. To compare the effects of source population and precipitation treatment (ambient, 50 % and 80 % reduction) on drought tolerance traits, we will build mixed models with source population and precipitation as fixed factors and block as a random factor. A tradeoff between drought-tolerant and cheatgrass-resistant traits can be confirmed by using a principal component analysis (PCA) on trait values followed by PERMANOVA; drought-tolerant traits should be orthogonal to cheatgrass-resistant traits. To test the effect of trait tradeoffs on seedling survivorship, we will regress seedling survivorship against traits.

I organized a four-part virtual webinar on prescribed fire and post-fire restoration in the Pacific Northwest through the student chapter of the Society for Ecological Restoration at University of Oregon on February 15-16 & 22-23, 2021. Recordings of the webinar is archived here: https://blogs.uoregon.edu/uoser/2022/03/

I gave a presentation at the Society of Range Management Pacific Northwest Section's "Home on the Range" webinar on October 5, 2021. Recording of the talk is archived here: https://www.youtube.com/watch?v=HZl1-VfaTYw&list=PLl12IcBpmhGsWENxTxuhqATJAheGDYHeP&index=4

I organized monthly volunteer events at local parks in the 2021-22 academic year for students at the University of Oregon to gain hands-on experience on habitat restoration.

I submitted an article titled "Intraspecific variation in native grass seedling response to water stress depends on the annual grass invasion context," which is under review at Restoration Ecology.

I am currently working on two manuscripts and organizing a meeting with land managers at the Bureau of Land Management offices in Oregon and Idaho.