This is an innovative project that aims to enhance understanding of biochar’s impact on both field and container nursery production. Working directly with nursery growers in Suffolk County, our goal is to evaluate if biochar can contribute to on-going agricultural stewardship efforts by increasing nutrient availability and soil water retention, and decreasing leaching losses. The knowledge gained would increase accuracy of biochar use recommendations and rates for nursery producers both within the County and regionally.

The goal of this study is to investigate the effects of biochar on nutrient availability and uptake and soil water retention in field and container nursery production. We hypothesize that biochar amendments will enhance moisture status and nutrient uptake by the crops, and hence, decrease runoff and leaching losses ultimately contributing to on-going agricultural stewardship efforts in Suffolk County. We also hypothesize that biochar application rate will impact soil water and nutrient retention, with retention increasing as biochar application rate increases.

Field experiments were established at one privet nursery and one Christmas tree farm in 2019. The second field trial will be established at another privet nursery in 2020. Container experiments were established at the Cornell University Long Island Horticultural Research and Extension Center (LIHREC) in Riverhead, NY and a local nursery on the North Fork of Long Island. In April 2019, a preliminary biochar column test was conducted using four different biochar types and a typical sandy loam soil from LI to evaluate which biochar type resulted in the greatest water retention. Results of this preliminary column test supported the use of a hardwood biochar in the field and container experiments. The hardwood biochar came from ARTiChar – Advance Renewable Technology International (Prairie City, IA). All the biochar material was inoculated for five days in a compost tea solution. In June 2019, both the container and field trials were established.

The PourThru procedure (LeBude and Bilderback, 2009) was conducted weekly on all container plants between mid-June and the end of September. This procedure allows for continuous monitoring of container pH and EC levels so plant nutrient status could be monitored and adjusted as needed. Plant heath evaluations of the boxwood plants occurred once per month during the summer on 7/15/2019, 8/19/2019, and 9/9/2019. Data on leaf miner and leaf spot prevalence were collected and an overall plant health rating was given on a scale of 1 to 5. Plant heath evaluations of the switchgrass plants occurred during the summer on 7/15/2019, 8/5/2019, and 8/19/2019. Data on number of flower stems per plant, disease, chlorosis, and overall plant health were also collected. Total leachate was collected from the boxwood and switchgrass containers twice in September and twice in October to measure ammonium and nitrate concentrations. Destructive sampling of the switchgrass containers at LIHREC occurred mid-September to evaluate differences between treatments on shoot and root growth in year one.

In March 2020, an initial PourThru was conducted on the overwintering (2019) boxwood and switchgrass plants prior to fertilizing them for the season. PourThrus were conducted every two weeks to monitor EC, pH, and N levels, and periodic plant health evaluation data were collected on the 2019 plants until they were destructively sampled in mid-June. At that time data were collected on root ball and shoot dry weight. 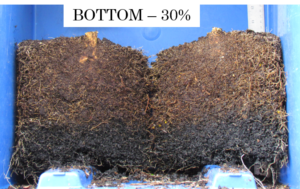 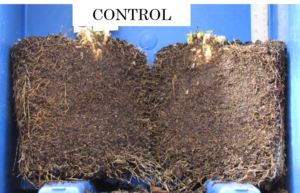 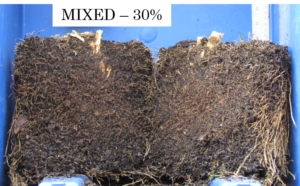 Image: Example of a switchgrass root ball with the 30% mixed vs. bottom biochar treatments and control. 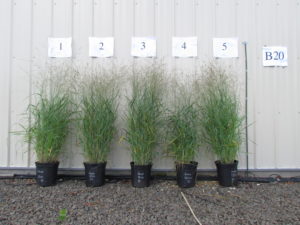 Image: Visual comparison of the aboveground growth for the switchgrass biochar 20% bottom treatment.

On May 8th, new switchgrass plugs were potted up at both the LIHREC and on-farm nursery site. Again, N leachate and PourThru data were collected every two weeks and monthly plant health evaluations were conducted until September. LIHREC trial plants were destructively sampled in early September, and root and shoot dry weights were measured. Switchgrass plants at the on-farm nursery site were again left to overwinter in a covered hoophouse. At the on-farm nursery, Hobo waterproof temperature sensors were installed in 3 of 5 containers per treatment to continuously monitor container temperature of the substrate through winter and spring until the plants will again be destructively sampled in mid-June. 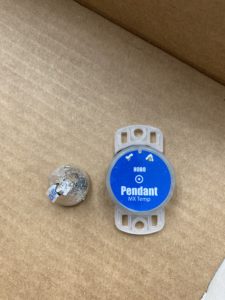 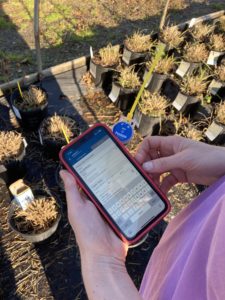 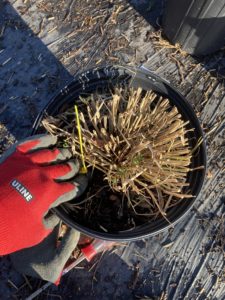 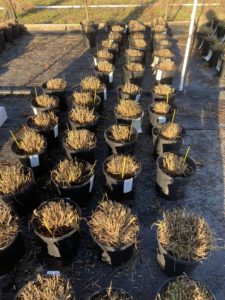 The field experiments were established using a completely randomized block design with subsamples. Ten consecutive plants per treatment was set as the experimental unit. Prior to biochar application soil samples were collected from each farm. Biochar was applied at rates of 5, 10, and 15 tons/acre and a no biochar control for a total of five replications per treatment to California privet (Ligustrum ovalifolium) and Douglas fir (Pseudotsuga menziesii). One week after applying the biochar, lysimeters were installed in two of five replications in each treatment at both field sites. The two cooperating growers followed their standard practices for weed management and fertility throughout year 1 of the trial.

Additional data were collected on the number of terminal buds on the leader and height for the Douglas firs. Soil health samples that measure the soils physical, chemical, and biological properties were collected from all field sites prior to biochar application. The soil health samples will provide growers with a comprehensive assessment of the quality of their soil and provide them with both short- and long-term management suggestions. Time domain reflectometer (TDR) probes were installed at the two field trials established in 2019 to continuously record soil moisture, electrical conductivity (EC), and soil temperature. 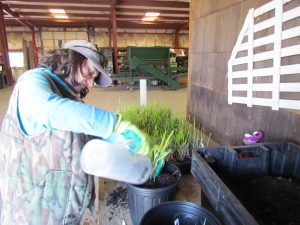 Mina Vescera potting up switchgrass for the biochar container trial

Data collection continued throughout 2020 from the two field trials installed in 2019. Unfortunately, the final participating grower located on the South Fork of Long Island that grows California privet was no longer able to participate. However, another grower on the North Fork that grows California privet was willing to participate in the trial. Trial installation was further delayed due to restrictions imposed by the Covid-19 pandemic. But eventually, lysimeters and soil sensors were installed in June and July, respectively, with the biochar treatments installed in early October at the final farm. For all field trials, three plant health evaluations were conducted over the course of the growing season. Lysimeters were checked for soil water extract after every rain event beginning in May and ending in November; soil water samples were kept refrigerated until shipped to a nutrient analysis laboratory for ammonium and nitrate analysis. Soil samples were collected from all growers in September and October. No tissue samples were collected because plants were still too small to collect a large enough sample across all treatments. Similarly, no destructively sampling was conducted in 2020. 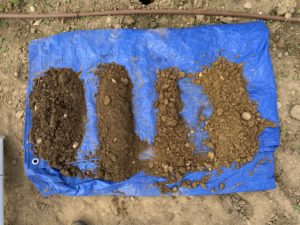 Soil type is Riverhead sandy loam with mean soil organic matter for control plots of 2.8%(samples from biochar treatments will be collected in spring 2021). From left to right, approximate depths of 0 to 6 inches, 7 to 13 inches, 14 to 20 inches, and 21 to 28 inches. 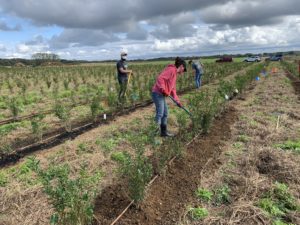 No trends were found for ammonium and nitrate leachate concentrations based on treatment for both boxwood and switchgrass plants.

Overall, plant health ratings of container plants in year 1 were either 4 or 5, meaning little to no disease issues.

Pictures of all container boxwood and switchgrass plants were taken on 8/20/2019 to visually compare treatments. No visual differences were seen from these side-by-side pictures.

PourThru data (EC and pH) were collected throughout the season. No differences were found between treatments over the season.

No significant differences were found between treatments on shoot dry weight, pH, EC, number of stems as determined by the plant health evaluations, and foliar nutrient levels for the overwintered 2019 on-farm switchgrass plants. Differences were found after destructive sampling on rootball weight with the control and 20% mixed biochar treatments having a greater rootball dry weight than the 10% bottom and 30% mixed biochar treatments.

Similarly, for the overwintered 2019 boxwoods at LIHREC no significant differences were found for rootball dry weight, shoot dry weight, foliar nutrient levels, and pH of the leachate. The 20% and 30% bottom biochar treatments were found to have significantly lower EC values over the growing season compared to the control.

Regarding the switchgrass plants potted up in 2020, no differences were found between any of the treatments for the parameters measured at either location. However, the irrigation management was found to differ significantly between the LIHREC and on-farm location and impacted nutrient leaching levels. This is an issue that must be investigated further next season.

Shoot and root data for both species are currently being summarized. (Update 2020) There were no significant differences found across treatments or control with root and shoot dry weights.

All plants continued to establish well during the 2020 growing season. There were no observable differences in biotic or abiotic issues. Health evaluation data are still in the process of being summarized at this time. Similarly, soil water extract data collected from lysimeters and soil moisture data collected from TDR probes are in the process of being summarized. Soil nutrient analyses showed significant differences in mean soil sodium (Na) base saturation levels in the Douglas fir trial only with the control differing significantly from the 5, 10, and 15 tons/A treatments (F16, 3 = 4.13, p<0.05). Mean soil sodium base saturation for control plots was 1.08%, with the biochar treatments having sodium base saturation levels at 0.88, 0.93, and 0.88 percent for the 5, 10, and 15 tons/A treatments, respectively.

An article providing an overview and explanation of the project was published in our local monthly agricultural extension publication (Ag News). This publication is mailed to approximately 325 growers monthly. The article is entitled "New study will look at biochar impacts on water and nutrient retention in nursery production."
Ag News article April 2019

An overview of the project including a discussion about biochar and soil moisture sensors was given to nursery growers attending Cornell University's annual Plant Science Day at LIHREC in July 2019.

Mina Vescera attended the Northeast Specialty Crop Water Symposium in December 2019 at the University of Vermont where she presented an overview of biochar and the field trials associated with this project. Talk titled "Evaluating wood-based biochar in field production of woody ornamentals in Long Island nurseries".

An article providing an update on the field portion of this trial was published in February 2020 in Ag News. The article is entitled "Evaluating Biochar in Field Production of Ornamental Woody Plants". Ag News Article February 2020

In March 2020, Deborah Aller gave a presentation on "Soil Science, Water Management & Amendments" for the Long Island Arboricultural Association. She discussed biochar and the ongoing research associated with this project for improving tree and plant health in the landscape.

In lieu of an in-person field day due to the pandemic a four part biochar webinar series was held in November 2020 (Biochar2020 webinar flyer). Biochar basics, the science behind biochar, ornamental nursery applications of biochar, and landscape applications of biochar were discussed by 12 experts from across the United States. We were able to reach over 600 individuals through these virtual events. All the recordings are available for viewing on the New York Soil Health website (Biochar Webinar Series-recordings NY Soil Health Initiative) or this link: https://blogs.cornell.edu/soilhealthinitiative/2020/12/04/biochar-webinar-series-recordings-now-available/#.YACa-OhKg2w

Also, in November 2020 Deborah Aller gave a (virtual) presentation on the 'Potential of Biochar for Use in Nursery Crop Production' at the ASA-CSSA-SSSA International Annual Meeting.

An article providing an update on the container portion of this trial was published in December 2020 in Ag News. The article is entitled "Project Update! Evaluating Biochar for Use in Container Production". Ag News Article Dec2020

On February 2, 2021, Deborah Aller will again be discussing biochar and sharing the current findings of this study at a University of New Hampshire Extension Plant Production Lunch and Learn Series.

Pending state and local restrictions, an in-person field day will be held in Fall 2021 to provide growers with a hands-on opportunity to learn about biochar in greater depth and discuss practical applications of biochar.

1 Grant applied for that built upon this project
15 New working collaborations
Success stories:

A nursery/landscape/golf course manager from western Long Island is now aware of biochar and its potential benefits and plans to incorporate it into his managed landscapes in the future.