Coated sand, made from AMD, is a cost-effective phosphate sorbent that will allow the capture and reuse of dissolved phosphate in the greenhouse/nursery industries. This will result in reduction in fertilizer application and non-point source phosphate inputs to aquatic systems while reducing the amount of AMD sludge to be disposed of. It will also provide a constant source of phosphorus during production and post-production that will lead to increased profits for the growers.

Coated sand is made using acid mine drainage (AMD) which may contain toxic heavy metals such as lead, copper or arsenic.  The procedure used to make coated sand will exclude many of the toxic heavy metals.  Additionally, heavy meals that are in the coating could be bound to the sand and are not at risk of leaching into aquatic and terrestrial environments.  However, it is essential that we understand which, if any, of the toxic heavy metals in the AMD might be present in coated sand and whether they can be leached from the coating.  In this experiment we added any of the heavy metals not already present in the AMD to the highest concentrations found in the literature and followed our standard coating procedure.  Both the sand and leachate were evaluated for heavy metal concentrations.

Seventy-five liters of raw AMD was collected from the Omega mine site south of Morgantown.  The raw AMD was spiked with heavy metals at concentrations found in the literature.  The pH was adjusted and the precipitated metals allowed to settle overnight.  The supernatant was siphoned off and the precipitated was applied to sieved sand in the standard coating procedure.  Supernatant and sludge samples were analyzed for aluminum (Al) , arsenic (As), calcium (Ca),  cadmium (Cd), cobalt (Co), chromium (Cr), copper (Cu), iron (Fe), magnesium (Mg), manganese (Mn), nickel (Ni), lead (Pb), antimony (Sb), selenium (Se), and zinc (Zn) via ICP-OES to determine the partitioning of metals.

Coated sand (250 ml/414 g) was placed in each of six 2 inch pots and watered with 250 ml tap water to thoroughly wet the sand.  On subsequent days the sand was watered daily with 100 ml tap water.  Leachate was collected on day 1, 14, 28, and 42 and analyzed for the metals listed above.  Tap water was also analyzed for the same metals to differentiate between the contribution from the sand and what existed in the tap water.

A second leaching experiment was done with both coated sand spiked with heavy metals (n=2) and coated sand that had not been spiked (n=3).  In this experiment we monitored leachate pH, sulfate, Fe, Al, Ca, Mg, and Mn concentrations.

Phosphate sorption of leachate by coated sand was assessed by placing a tray of plain or coated sand beneath a pot planted with pansy, petunia, or chrysanthemum.  Each tray was filled with 1 L (1,400g) of either plain or coated sand and covered with landscape fabric to prevent plant roots from colonizing the sand.  Each tray had a drain that allowed the pot leachate to flow through the sand and drain to a sample bottle (Figure 1).

In the first in-pot sorption experiment, P-saturated coated sand or plain sand was mixed with the standard potting mix at a ratio of 10, 20, 30, or 40%. A plain potting mix control was included for a total of nine treatments. Pansy, petunia, or chrysanthemum seedlings were transplanted in a 6” pot with five replications. Pots were initially irrigated with deionized water. At all subsequent irrigations, pots were fertigated with Hoagland’s fertilizer solution made either with or without P. Pot leachate was collected from each pot and the leachate volume was determined. Phosphate, chloride, sulfate, calcium, magnesium, and manganese concentrations were determined on the leachate at each irrigation. Electrical conductivity, pH, and concentrations were determined every two weeks.

In the second in-pot sorption experiment, we selected the percentage of coated sand that performed the best in the previous experiment. We want to determine how the coated sand would perform in terms of P retention for a long term crop.  P-saturated coated sand, unsaturated coated sand, P-saturated plain sand and unsaturated plain sand were mixed with potting mix at a ratio of 20% for all substrates.  A plain potting mix control was included for a total of five substrate treatments. Chrysanthemum seedlings were transplanted in a 6” pot with 4 replications.  After the initial irrigation with deionized water, each substrate treatment was irrigated with Hoagland’s fertilizer solution made with 0, 25, 50, 75, or 100% P.  Pot leachate was collected from each pot and the leachate volume was determined. Phosphate, chloride, sulfate, calcium, magnesium, and manganese concentrations were determined on the leachate at each irrigation.

The metals in AMD were primarily Fe (42%), Ca (26 %), Al (20%), and Mg (8%).  The percentage of these metals changes when the pH is adjusted during the precipitation process.  Fe was still the predominant metal accounting for 63% while Al accounted for 31% of the mass.  The metals partitioning between supernatant and precipitate was metal-specific.  The metals Ca, Co, Mg, Mn, Ni, Sr, and Zn remained predominately in the supernatant while the metals Al, As, Cd, Cr, Cu, Fe, Pb, and Sb were predominately in the precipitate.  Despite being major components of the AMD, Ca and Mg accounted for just 1.7 and 0.6% respectively of the precipitate mass.  The majority of the As, Cr, Cu, Pb, and Sb precipitated; however, due to low concentrations in the raw water, they comprised just 3.6% of the mass of the precipitate.  These results likely over estimate the percentage of metals precipitated as we used the highest concentrations reported in the literature.  Additionally, there may have been interactions between metals that would not naturally occur as they would not be found together. 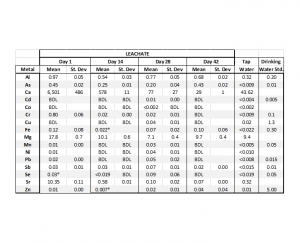 BDL – Below Detection Limit, *reported value is from the one sample in five that was above the detection limit

Leachate dynamics were very similar between all three species.  The data presented below are from chrysanthemums, which were under cultivation for the longest time.  The coated sand very effectively retained P within the pot.  Even at the lowest percentage, coated sand removed at least 80% of the P in the leachate at the initial watering.  The higher the proportion of coated sand in the potting media the greater the amount of P was sorbed. In the initial fertigation, in pots with 10% coated sand and receiving fertilizer with P, 35% to 38% of the P was sorbed, and increased to 86% to 91% in pots with 40% coated sand. P sorption decreased with each subsequent fertigation. All coated sand treatments removed P from the leachate, including the last fertigation event.  This indicates that, while the coated sand may become saturated, as plant uptake removes P from the coated sand, it retains the capacity to sorb additional P.  It is estimated that the 10% coated sand retained 109 mg/L P per pot while the 40% coated sand retained 348 mg/L P per pot in the chrysanthemum treatments.

The second in-pot sorption experiment was initiated in November 2021 and is ongoing.

Additional Information on Why Participants Chose Their Answers: