This project is designed to determine the efficiency of cultivating morels in the northeastern US following current production practices being followed by commercial farms throughout China.  We plan on conducting field cropping trials in Pennsylvania in 2019-2020 and running an additional Pa trial and a cropping trial in Maine in 2020-2021.  In the fall of 2019 we purchased and installed a high tunnel at Penn State University's Plant Pathology and Environmental Microbiology Department's farm at the Russell E Larson Agricultural Research Center at Rock Springs, Pa.  The high tunnel was covered with a shade cloth instead of plastic to allow precipitation to reach the production plots and also help maintain soil moisture.  We made three rows of raised beds inside of the high tunnel, one with no soil amendments, one with chopped wheat straw and one with oak sawdust.  The amendments were tilled into the soil after application.  The field plot design consists of 6 treatments with 4 replicates per treatment. A master's student was funded with this grant and he produced spawn using two different species being tested in the field plots (Morchella rufobrunnea and Morchella importuna).  Once the soils were amended and tilled, spawn was added to the plots and hand incorporated into the soil. Treatments: 1) control soil with M. importuna 2) control soil with M. rufobrunnea 3) chopped straw-amended soil with M. importuna 4) chopped straw-amended soil with M. rufobrunnea 5)  sawdust-amended soil with M. importuna and 6) sawdust-amended soil with M. rufobrunnea. Drip line irrigation is ready to be installed in early spring, but wasn't necessary in the fall due to the rainfall received after spawning.  Soil temperature data loggers were also purchased and will be installed after winter so that soil temperatures can be closely monitored and compared with initiation of morchella fruit bodies.  No data collection has taken place yet.  Indoor cropping and biological studies as well as the first outdoor cropping date collection will take place in 2020.  No outreach has been conducted yet at this time. 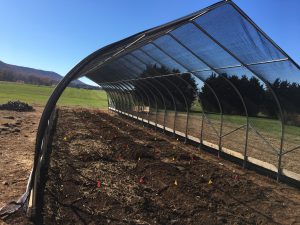 1: Determine the best Morchella species to use for mushroom cultivation in northeastern United States.

US mushroom enthusiasts and research scientists have tried cultivating morel mushrooms for decades with very limited and sporadic production results.  Several patents were issued in the US on morel cultivation techniques but, unfortunately, following these processes production was often unsuccessful.  Recently, scientists in China developed a new outdoor cultivation technique that has been successful and adopted by many mushroom farmers throughout China.  However, much still remains unknown about the details of what is needed to successfully produce morels on a consistent basis.  This proposal was developed with the objectives of determining the feasibility of farmers in the northeastern US adopting these techniques and growing morels as a profitable business venture.  Our project will: 1) Determine which species produces the best in the northeastern US. 2) Test the effects of different soil organic matter amendments on morel cultivation. 3) Monitor the effects of soil environmental parameters as well as environmental conditions on morel fruiting. 4) Test effects of soil physical and chemical properties on more fruiting in climate controlled indoor cultivation systems. 5) Disseminate morel cultivation information to farmers throughout the northeastern US.

With this project, we propose to address 3 questions regarding morel production in the US.

2) What influence does soil amendment have on yield potential.

3) Based on yield data, what profit potential is there for US growers considering cultivating morel mushrooms.

Outdoor morel cropping trials were initiated at the Penn State Rock Springs site in fall 2019. However, due to COVID 19, most personnel and employees were not reporting to campus during the University personnel reduction in March 2020 until June 2020. The spring is a critical time to water and induce morel fruiting in the high tunnel. Unfortunately, no morels fruited and were harvested at Rock Springs, Pa in spring 2020. Student and employee access was allowed starting summer 2020, but with limitations on travel and working in close proximity to one another (and are still in effect). New COVID travel restrictions and limited supplies hindered our ability to install a 2nd high tunnel at Rock Springs and the 1st high tunnel at the University of Maine location (as originally outlined in the grant proposal). However, in fall, 2020 we were able to clean up the high tunnel site at Rock Springs (remove weeds, till and reinoculate the plots with 2 Morchella species (M. importuna and M. rufobrunnea). The plots received 1) no organic amendments 2) chopped wheat straw amendments or 3) oak sawdust amended. On October 5, 2020 the State College high tunnel site was spawned (inoculated) and dripline irrigation was added. Nutrient bags (sterilized sawdust and ground corn) were added to the field plots the last week of October 2020. The plots were irrigated as needed until the weather became too cold and daily freezing temperatures were reached. No yield data will be available until spring 2021.

Because we were not able to purchase and install a high tunnel at the University of Maine location, the Univ. of Maine collaborator, Jason Lilley, prepared an existing smaller tunnel on the field location. Soil samples were taken for analysis and the site was prepped by spraying and removing weeds prior to tilling and forming 2 raised beds and dividing the plots by trenching following similar techniques that were implemented at Penn State. Each raised bed consisted of 6 plots (12 plots total - 2 beds x 6 plots). Three treatments were applied consisting of M. importuna mating type MAT 1, M. importuna mating type MAT 2 and spawn consisting of a mixture of both mating types (4 reps each) and incorporated lightly by hand the last week of October, 2020. Nutrient bags (same construction as in Pa) were made and sterilized at Penn State and sent to the University of Maine for application to the inoculated plots. Dripline irrigation was also added and moisture was provided until the temperatures become too cold. No yield data will be available until spring 2021.

The outdoor high tunnel at Penn State experiment is investigating the effects of soil amendments and morchella species on yield potential. The outdoor tunnel experiment at the University of Maine is designed to test how mating types affect morel fruit body formation and yield potential. Ascomycetes (of which Morchella belong) typically have different mating types and there is support in the literature suggesting that having both mating types will improve viability of fruit body formation. Therefore, our graduate student Ryan Guo, obtained 7 isolates of Morchella importuna and 9 isolates of Morchella rufobrunnea from the Penn State and the USDA NRRL culture collection to determine mating types so that we could select mating types (MAT 1 and MAT 2) of each species to determine how mating type impacts yield potential. Ryan successfully identified M. importuna isolates of both mating types following protocol found in the literature but is currently still troubleshooting the technique to identify the mating types of M. rufobrunnea (see data table in results section). The results of this work led us to select 2 M. importuna isolates (one MAT 1 and one MAT 2) for the mating type outdoor cropping experiment at the University of Maine. 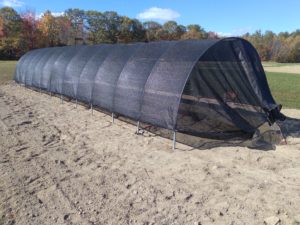 Spring 2021 cropping results at both Penn State University and at the University of Maine both yielded no morel mushrooms.  The research team reassessed the cropping protocol and modified the 2021-2022 experimental design based on new information found in the literature from China.

Penn State fall 2021 field crop spawning experiment: Two isolates of each species were chosen based on the results from the mating type work (M. importuna WC 1021 and WC 1022) and two isolates of the M. rufobrunnea were chosen (NRLL 28465 and NRLL 28466).  Grain spawn was made from each of the chosen isolates for inoculation at Penn State University and at the University of Maine.  However, contamination limited the amount of spawn available for cropping so only Penn State University outdoor plots in the high tunnel were spawned October 2021.  Spawn from each individual mating type and a spawn mixture of both strains (species specific) was added to the different plots to determine if species and/or mating type affects fruiting ability and yield. The spawning rate used was approximately 3 times the rate previously used and was inoculated in a layer on top of the cultivated soil plots (previously the spawn was incorporated into the cultivated soil).  Each plot was then covered with approximately 5 cm of "top soil" purchased from a local landscape company.  Samples of both soils were sent to Penn State's agricultural analytical lab for chemical analyses.  Drip line irrigation was added and black plastic was used to cover the plots (also a change from previous cropping attempts).  Early visual observations noted a much higher rate of surface colonization than what was previously observed in outdoor cropping trials.  Outdoor cropping results will be determined spring 2022. Additional spawn was produced (after contamination issues were noted), stored at 4C and will be used for outdoor inoculation during spring 2022 at the University of Maine field plot (the timing will be based on soil and air temperatures).

No yield data collected at this date.

* No amplicons observed in any reactions

**No DNA isolated due to poor growth ??

No outreach was planned yet for this time in the project. Further outreach and publications will be based off of the results of the cropping trials.