Problem: Strawberries are an important, high value crop to northeast diversified farms. Since 2005, strawberry acreage/production has dropped by more than 50% in NYS resulting in market share loss while consumer interest in local produce rises. Recent inquiry into strawberry production barriers revealed 41% of farms had root disease or nematodes that impeded productivity while 28% were limited by weed pressure. Soil-borne disease management requires long crop rotations, and chemical control is relatively ineffective.
Novel Approach: ASD is being researched in warm, annual strawberry production regions as a sustainable substitute for chemical fumigation. ASD has not had extensive testing in cold soils. Locally available carbon sources have not been tested. ASD has not been tested with matted-row perennial JB strawberry systems.
Justification: Improving understanding and trust in ASD will increase adoption on strawberry farms and increase acreage and productivity. On-farm research trials will compare novel solutions with current farm practices. Removing primary barrier will improve related skills in fertility management, cultivar selection, overwintering etc. Environmental impacts will be reduced due to less emphasis on chemical treatment.
Hypothesis: ASD will provide control of soil borne disease, nematode and weed pests of perennial JB strawberries in cool northeast soils; that carbon source used during ASD will impact the level of pest control; and that the benefit of ASD will encourage farmer adoption of this process as a sustainable pre-plant management practice for perennial matted row or plasticulture strawberry systems.
Research Plan: These hypotheses will be tested with the help of five JB strawberry farmers located from Maine to western NY that use traditional matted row or plasticulture systems. Three ASD treatments using alfalfa meal, Brassicaceous seed meal and a locally available carbon source will be administered during year 1. Plant health, weed pressure, yield, soil quality and longevity of ASD effect will be measured for all the experimental treatments and the farm control using a randomized complete block design created to help determine significant difference. Expense and income will be tracked on all farms.
Outreach Plan will include field workshops to be held at the participating farms during the third year of project. Winter presentations throughout the northeast and traditional outreach like newsletter articles will included with social media, video and podcast efforts. Paper submission to peer reviewed journal will be key part of outreach.
Project Objective: We will test the cost effectiveness and utility of anaerobic soil disinfestation (ASD) using several different carbon sources in northeastern perennial June bearing strawberry systems. Effective, sustainable control of soil borne disease, nematodes and weeds in matted row or plasticulture systems will improve yields, reduce chemical reliance and support farmers using a strawberry production system unique to northern and central regions of the United States.

This project will test the cost effectiveness and utility of anaerobic soil disinfestation (ASD) using several different carbon sources in northeastern perennial June-bearing (JB) strawberry systems. Effective, sustainable control of soil borne disease, nematodes and weeds in matted row or plasticulture strawberry systems will encourage improved yields, reduce herbicide and fungicide reliance and support the farmers that are using a strawberry production system that is unique to northern and central regions of the United States.

Strawberries were ordered and sourced from Nourse Farms in South Deerfield Mass.  Jewel was used on both Eastern NY farms.  Cavendish was used on Maine farm and Galletta was used in Western NY.

As strawberry plants were received, sub-samples were sent to Dr. Kerik Cox for evaluation of disease and other potential issues arriving on the plants from the nursery.

In Eastern NY, the two trial locations were plowed and disked in preparation for the trial by the farmers. After this, soil samples were taken and sent to the Cornell Soil Health Testing Laboratory for Comprehensive Assessment of Soil Health. CSHT sample dates were: May 20, 2021 –Ariel Farm, Saratoga County, NY; May 21 –Hand Farm, Washington County, NY.  On May 24 and 25, the treatment materials were applied to the trial in repeated randomized plots of 50' lengths in amounts specific to each treatment. The farmers disked in the treatments and drip tape was laid and turned on. Silage tarps were laid over the entire trial area and secured with weights. The silage tarps were left in place until temperatures under the plastic reached a minimum of 100 degrees. For the mustard biofumigant treatment, the seed was sown on May 25 and irrigated. The tarps were removed on June 17 and the plots were left to off-gas. On June 23, Jewel bare root strawberries were planted into the treatment plots, one farm using a strawberry planter set at 18 inches in row and one farm by hand at 20 inches in row. For the mustard biofumigant treatment, the crop was terminated and incorporated by rototilling at the slowest speed on July 2nd and left to decompose. The bare root strawberries were planted by hand on July 8th. Weed evaluations were done on August 10th, counting the number of broadleaf and grass weeds in 3 square feet twice in each plot and identifying specific species as well as a visual disease evaluation. Plant samples were collected in early September and send to Dr. Kerik Cox for evaluation of disease and other issues in the first growing season. 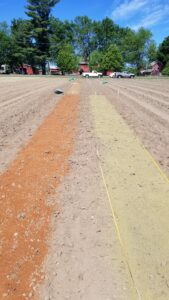 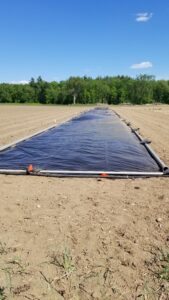 In Western NY, the treatments were laid out on May 26, with the grower covering the treatments with black plastic mulch and irrigating. After three weeks or so, the holes were poked in the plastic to let the treatments off-gas and bare root strawberries were planted in by the grower. In the first year of the ASD trial at Underhill, we evaluated 3 ASD carbon sources (brassica seed meal, molasses, alfalfa seed meal) against a positive control (Ridomil Gold SL soil drip) and a negative control (no treatment). All plots were grown as plasticulture, June-bearing strawberries 'Galletta." Initially, strawberries in the ASD treatments appeared to have some nutrition issues and had small, chlorotic leaves. By mid-summer they grew out of this and had green leaves. Weeds were an issue in this planting, and the ASD didn't seem to do much to prevent weed issues.

Plant health was evaluated twice in the growing season. In both evaluations, Ridomil Gold SL-treated plots had the most healthy plants, but this may have been compounded by the positioning of the Ridomil Gold treatment-- on the border of the field, where weed pressure was reduced due to neighboring plots. On the second plant health evaluation, plant health declined across all treatments. Alfalfa seed meal was the second-best treatment, after Ridomil Gold. While brassicas have a track record of improving soil health as a cover crop, using them as an ASD carbon source did not seem to provide good results-- the plant health in those treatments was worse than the negative control that receives no treatment.

As for the grower, his opinion of Ridomil Gold is very high, although he is interested in sustainable means to prepare soil for strawberries. In a different strawberry planting, he used Ridomil Gold in the autumn, and those fields looked really good. I am hoping we'll see more positives from the ASD treatments as we can collect more comprehensive data next year. 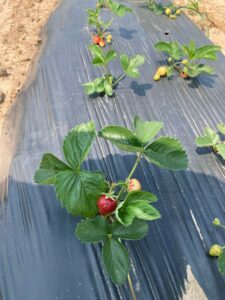 Details re: Maine farm will be forthcoming

Two posts on anaerobic soil disinfestation were posted to the Cornell Berry Blog and distributed through email lists and newsletters.