Centrifugation could provide an opportunity for maple and walnut syrup makers to reduce costs, increase environmental sustainability, reduce health risks, and increase profits. Producers typically use a filter press with diatomaceous earth (DE) as a filter aid (North American Syrup Producers Manual, 2006). This process creates waste in the form of spent diatomaceous earth, niter, and filter paper.  Inhaling DE’s minute silica particles during handling also poses a possible health risk to producers.  For these reasons, many maple producers would prefer not to use DE. Centrifugation would also make it easier for walnut syrup producers to clarify their product which has higher pectin concentrations that quickly plug up conventional filter presses.

Our hypothesis is that with the proper knowledge inputs and engineering expertise a basket centrifuge can be designed and constructed to efficiently and safely clarify maple and walnut syrup.  Further, we hypothesize that this device will be a cost-effective improvement on presently used syrup clarification techniques.

Research findings will be shared with farmers in the maple syrup production business through presentations at trade shows, and national-reaching trade publications like The Maple News and the Maple Syrup Digest. If successful, Project advisors will also facilitate discussions with maple equipment manufacturing companies to launch broader manufacturing and distribution of the new clarification technology.

The project objective is to design, test, refine, and scale a cost-effective centrifugal separator for maple and walnut syrup clarification.

To design, test, refine, and scale a cost-effective centrifugal separator for maple and walnut syrup clarification.

Moving forward into 2021, work has pivoted to focus on walnut sap and pectin. The reasoning behind the pivot includes that by February, Walnut sap-flow season will be underway and there will be a ready supply of fresh sap to experiment with.

The Marshall University team, Kolling and O’Dell, will be working with other faculty in the chemistry department to come up with analytical procedures to measure the amount of pectin in the sap. In the meantime, Greg Christian (Toms Creek Maple), will be taping walnut trees and collecting the sap for further analysis. Christian is planning on continuing his centrifuge experiments, working with various chelating agents to bind the pectin before centrifugation to remove it from the sap. The goal of the next few months is to reduce the pectin concentration in the sap to a level where it is practical to concentrate the sugars in the sap by running it through RO (reverse osmosis process).

We received notice that the project was funded and less than one month later, our partners, Marshall University and RCBI were fully engaged reacting to the COVID-19 situation. This caused unforeseen delays in the research timeline and meant that most of the research work was not able to begin until their facilities reopened in June. At this point, a progress report brought everyone up-to date and a 6-month work plan was developed. The meeting was also important in that walnut sap and syrup needed for the lab work was delivered to Derrick Kolling at Marshall University.

Kolling was able to move forward by hiring undergraduate chemistry student Hayden O’Dell to begin the lab analysis on walnut sap and maple syrup. Additionally, an “Extreme Raw Power” centrifuge was purchased for Greg Christian to begin experimenting with the workings of an “off the shelf” machine. Also purchased was a Hanna Instruments Maple syrup grading Photometer for Marshall University to test the clarity of their centrifuge experiments.

In the summer of 2020, Marshall labs were more-or-less closed, therefore O’Dell worked on a literature review focusing on the chemical composition of maple say and syrup and in the lab on the maple and walnut syrup particle analysis whenever possible.

On September 24, 2020 a second research team meeting was held at RCBI. By this time, particle analysis work was nearly complete, and the analysis prepared by Hayden was reviewed. This analysis gave Christian the information he needed to use with the results of his experimentation with the Extreme Raw Power centrifuge and plan the modifications to move forward with the centrifuge redesign.

With the Marshall University labs reopening over the summer, 2021 was a much more productive year for this research. The focus of the research continued to be two pronged.

The pectin problem: Work with Marshall University focused on practical and field applicable ways to identify and reduce the amount of pectin in walnut sap. With pectin in the sap, walnut syrup producers are not able to concentrate the sugars using reverse osmosis (RO), a technique commonly used in the maple industry. Pectin also makes filtering of the syrup very difficult. Focusing on pectin was a pivot in the analytical work from a more general understanding of the chemical composition of walnut and maple sap and syrup to solving a problem holding back the advancement of the walnut tapping industry 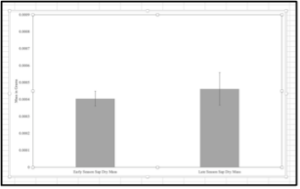 Because pectin is a polysaccharide, made up of long chains of monosaccharides which are simple sugars, a refractometer was tried. Refractometers are found in every sugarhouse and are used to measure the brix (% sucrose, a simple sugar) in the sap. The hypothesis was that changes in sucrose concentrations could be used as a proxy for pectin. Hayden conducted several experiments over the summer and found that, although an interesting idea, it did not work (Appendix 4 Walnut Sap and the Pectin Problem).

With the discovery that it seemed as though pectin plug could be spun out from walnut sap using centrifugation, attention turned from “the barn” back to the chemistry lab to see if it was possible to positively identify and quantify pectin in the centrifuge tube plug. A literature review of analytical tools to identify and quantify pectin led to an acid/base titration method (Ranganna, 1995) as the preferred method due to its simplicity and applicability without the need sophisticated analytical instrumentation. O’Dell proved the technique using commercially available pectin but found that it could not be used with the small sample quantities available from centrifuging 2ml sap samples.

Having the size particle analysis from Marshal University at hand, work at Tom’s Creek Maple focused on the removal of niter or sugar sand from the syrup. This work was conducted on the Extreme Raw Power commercially available continuous flow centrifuge, with 6,000RPM and achieving approximately 4,000xg, and a cost of approximately $1,600. The use of an off-the-shelf centrifuge instead of designing one from scratch was to have a tool that was affordable for the average syrup maker. The design strategy focused on modifying this existing product to make it better for clarifying syrup.

Figure 2 - 3-D printed basket that could be used with filter paper and a filter aid to clarify syrup. 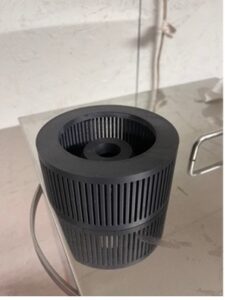 2020 Outreach activities, just like the research process, were curtailed by the pandemic. However, RCBI held a new syrup producer workshop in November at Tom’s Creek Maple at which the work of this project was explained.

2021 (year 2 outreach) consisted of two webinars/presentations and the publication of an article in the Maple Syrup Digest on walnut sap flow, that included reference to the pectin issue, and an article promoting walnut syrup production in National Woodlands magazine. Additionally, the team worked on the establishment of a 1,000 tap walnut tapping operation that will be used in the year 3 research.

The first webinar was a presentation and round table discussion with researchers/technical service providers, and farmers/producers participating in current walnut research in the region. The second webinar was directed at the current and potential syruping community through a regular webinar series held monthly by Future Generations University.

National Woodlands has a circulation of 46,000. The Maple Syrup Digest is circulated to members of 13 state affiliates, reaching 3,000 syrup producers. It is estimated that at least 2000 producers and 100 technical service providers gained new knowledge and awareness about tappable tree species and alternative uses for walnut trees as well as knowledge about resolutions to solve production issues in walnut syrup.

There is a new large-scale (1000 tap) walnut syrup producer in West Virginia as a result of this work; this is the largest producer in the region, possibly in the US.

After this second year of work, the team has concluded that the complete elimination of all niter compounds will not be possible using centrifugation. Depending on the site and the conditions under which the syrup is made, particles imparting cloudiness to syrup vary down to the point of being almost colloidal. Although centrifugation is theoretically possible, it is not practical or cost effective with a reasonably priced off-the-shelf centrifuge. It is believed that is it possible to remove the vast majority of the suspended particles but that the syrup will need to be polished using standard filtration techniques. In the last year of project, activities planned include determining the percentage niter that can be removed with a centrifuge and the reduction in the use of diatomaceous earth that results from centrifuging syrup prior to filtration.