The proposed project explores the use of an existing concept on ‘Banker Plants’ in greenhouse IPM, to expand our knowledge and ability to manage the harlequin bug, an important field pest that attacks collard, kale, cabbage, broccoli and other crucifers in the Southeastern U.S. causing severe reduction in market value or death of the plants. The economic impact of this pest can be far-reaching especially among small growers who produce most of the collard and kale found in many U.S. market outlets. Collard, kale and cabbage, like other Brassicaceae, are attacked by an insect pest complex from seedling throughout crop growth. This results in extensive damage that warrants frequent and predictable application of insecticides to keep the pest below economically damaging levels, sometimes resulting in over $1 billion in management costs and crop loss. Cases of resistance by some crucifer pests to all classes of insecticides have been reported in the U.S. and elsewhere. Heightened public concern regarding excess pesticides use on vegetables and the documented negative effects have provided the impetus for increased research to find viable alternatives to pesticide dependence. The proposed research will build on and improve the efficiency of current deployment of mustard trap crops for HB control in the field, as well as provide a footprint for their use in other cropping systems using the banker plant concept — a greenhouse pest management approach. This will be accomplished by manipulating either the fixed intra-row or movable inter-row establishment of a banker trap crop (pest sink) positioned at different distances within or between main row crops. We will examine the effect of banker trap plants on overall HB attraction to, and retention on, the trap crop by assessing egg number and parasitization, nymphal and adult distribution between trap plants and main crop plants, damage to main crop, and leaf biomass at harvest. The density ratio will be modeled to enable adjustment for use with other pests in this or another agroecosystem thus giving the findings wider pest management application. This approach will reduce the area occupied by the trap crop, especially important in the case of a sacrificial trap crop which has no other value, and also provide the grower the flexibility of having the trap plants always available at the most attractive stage (if the mobile BTraP is adopted). The long-term goal is to reduce insecticide use in vegetable production, increase farm profits while enhancing food and environmental safety as well as well being in farm communities. It will also conserve natural enemies and pollinators. This project models existing knowledge from one area of science (greenhouse biological control) to accomplish a different pest management goal. Its success would hopefully foster enough interest and research on trap crop use to attract increased funding. The project targets small vegetable growers working in different agroecosystems but can be scaled to medium-sized farms. On-farm demonstrations will be established in conjunction with collaborating growers in North Carolina and Virginia.

Objective 1. The original sequence of this objective was altered because of the difficulties highlighted in the Preamble. The insect population in the lab crashed unexpectedly making it impossible to carry out the experiments as planned. We therefore started with the field experiment in a modified design which included all four mustards and the originally prescribed TC:MC ratios of 0, 5, 10, 20 and 25%. This also experienced problems with extremely heavy rainfall which led to flooded fields; crucifers are intolerant to flooded soils. Despite the poor stands that resulted we were nonetheless able to obtain some results which are reported here.

Field experiment: The experiment had two 5m-row plots x 4 mustards x 5 TC:MC ratios (0, 5, 10, 20 and 25%) arranged in a CRB with 3 replications (4 in VA); it was conducted at NCA&T State University (NCA&T) Research Farm in Greensboro, NC, and in the Virginia Tech Experimental Farm in Kentland, Blacksburg, VA. A locally adapted collard variety was used as the main crop; in NC the variety Georgia Southern, and Vates  in Virginia.

Each 2-row plot had 20 plant stands, with some of them replaced by the different mustards according to the respective TC:MC treatments. These were randomly spaced out ensuring equal distance between them within the plot (Figure 1). Measurements were made by close direct visual inspection, on 5 previously tagged collard plants and up to 5 mustards/treatment plot) for estimates of harlequin bug (HB) adults and 3rd-5th stage nymphs, HB egg masses (oviposition) and flea beetle counts (Blacksburg only). At this stage collard yield was not the focus on yield since we let measurements continue through the season past the normal period for harvesting. No insecticide was applied except once (VA) and twice (NC) to reduce caterpillar damage, which tends to confound measurements taken for damage by HBs. Sampling was started two weeks after transplanting (DAT)—June 25th in Blacksburg and July 19 in Greensboro. The difference in the start of observations was due to heavy rains during the early part of the growing season which delayed transplanting in Greensboro.

Laboratory study: This was supposed to be conducted before the field study but we had to revise the order when our laboratory culture crashed due to unexpected and still unclear reasons. We were able to resuscitate the culture mid-summer and run the arena choice test (Figure 2) which simulated different TC:MC ratios (0, 5, 10, 15, 20, 25%) in which we added another ratio, 15%, which was not part of the field study. The second was a cage study with potted seedlings (Figure 2) in which different ratios were tested as in the choice arena, except with whole plants. It was replicated over time due to space limitations to run four replications of large cages simultaneously. It also required a large number of insects which was also a limitation. This second experiment was started late in the fall after the insect culture was fully re-established. At the time of this report, the experiment is still incomplete although initial results closely mirrored those obtained in the choice arena laboratory experiment.

Objective 2. Due to the COVID-19 pandemic, the activities (Objective 2 a & b) that were scheduled for year 2 were not carried out as planned in 2020. This was resulted from university restrictions on access to research fields and laboratories in response to state and federal guidelines. A modified objective 2 will be carried out during the 2021 season with one activity moved to the following and final field year (2022) when a no-cost extension request will be made, as part of Objective 3.

Field experiment: The 2019 season had heavy rains throughout the region and in some areas such as the Greensboro where NCA&T research farm is located, there were sustained rains for several weeks causing a delay in the onset of transplanting as fields were water logged and/or soggy, and at Greensboro  made worse by the use of wheat straw mulch for weed management. We were nonetheless able to plant 3 replications of the experiment instead of four as originally planned as a result of widespread water-logging. Even then, the plant stands were poor and plant health was affected. That notwithstanding, we were able to salvage a good part of the study and collected enough data to enable us to draw reasonable conclusions that were supported by laboratory studies. The experiment in VT performed much better and provided useful information.

The harlequin bug (HB) population was high throughout the season. at both locations. In Greensboro, we computed the ratio of HBs as well as egg masses on the trap mustards to that on the collard (TC:MC). These data were used to plot trap crop retention potential (TCRP) that allows us to test the hypothesis that "if more insects are found on the mustard trap crop as compared to the main crop (collard), there will be concomitantly less damage on the collard". We can therefore make an indirect inference on actual damage since this was difficult to measure given high caterpillar damage at both locations. With this assumption, the highest TCRP values in Greensboro were obtained with the 25% ratio (where FBL > GR > OFM >> SGC), 20% (for FBL and OFM >> GR and SGC). There were clear differences between mustard varieties with the Florida Broad Leaf (FBL) and Old Fashion Mustard (OFM) showing the highest retention potential values at 10 and 20% (Figure 3). 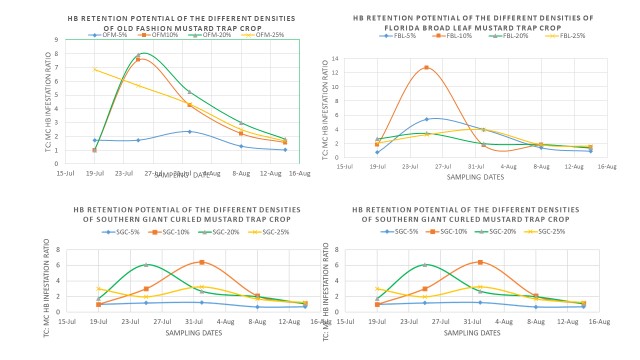 Even though with lower TCRP values, the two other mustards (SGC and GR) also showed a similar trend. We conclude, based on these initial findings, that FBL and OFM are the two best mustards in Greensboro, and the trap refuge of 10 and 20% TC:MC ratio were the most effective mustard trap varieties (Figure 3). It is of great significance to note that the peak TCRP values in this figure occurred at the optimal harvesting period of the collard, July 23rd and July 31st, for FBL and OFM, and were more spread out for the other two mustards. This overlaps broadly with the results from the lab study which is described below. The results from Blacksburg are similar but with different mustards (SGC > FBL > OFM) having the highest trap retention potential inferred in this case also using the direct HB counts (Figure 4). The 10% and 25% were most effective although there appears to be an inexplicable peak in 5% with FBL. As earlier indicated, the 20% treatment was inadvertently omitted at this location.

No results are available at this time for Objective 2.

Results from the laboratory dual choice arena test (DCAT) using the most promising mustards (FBL and OFM) identified from previous studies show that the 15, 20, and 25% ratios are the most promising (see circle , Figure 5A). Feeding damage (or necrosis) on the TC was expressed against the collard MC as described for the field experiment to test the hypothesis that the longer the insect feeds on the trap, the greater the likelihood of increased retention of the HB. This enables us to determine which TC:MC ratio provides the best retention on the trap crop. The greatest differences in TCRP were obtained on FBL (Figure 5B). Using LSM analysis, significant overall differences were observed (F, 6.6; df, 4; p= 0.0012) between the five ratios, but not between the three top ratios (Figure 5A). Figure 6 shows the plot of the TCRP of all treatments at both locations. 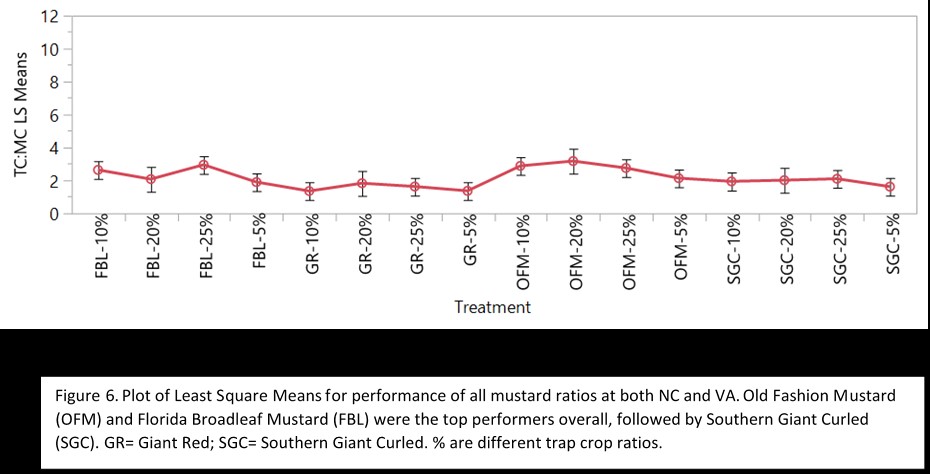 Findings from both the field (2 locations) and laboratory studies (Greensboro only) during the first reporting period allow us to draw the following overall inferences:

No results are available from Objective 2 involving laboratory verification of the results from objective 1 which is still in progress.

We have no education activities to report at this time due to the pandemic. Nevertheless, the graduate student on the project has been doing lab studies which are still ongoing.

No outreach activities have been conducted as a result of the pandemic. Farmers will be involved in visits and other activities in 2021 assuming all goes well with regard to COVID-19 pandemic.