University, NGO, and farmer partners in North Dakota evaluated a screen of 107 sorghum lines in an effort to identify the most promising lines for further evaluation. In 2016 we carried out replicated trials of twenty one lines, two check hybrids, and a mixed population on two organically managed university sites and on one organically managed farm. We also carried out two unreplicated trials on two additional organic farms. Farm animals damaged the planting at one of the farm sites, but we did get useful information from the other locations. Some promising lines appeared, but additional work is called for to clearly work out the potential for sorghum production in North Dakota. Going forward, our university partners will begin increasing the seeds of the best performing lines of sorghum for additional evaluation, potential production, and further breeding.

Sorghum is a warm seasoned grass that is grown in wide rows much like corn, which it outwardly resembles. Unlike corn, sorghum grains are carried in a single head at the top of the plant, and it is largely self-pollinated. It is lower yielding than corn in high production areas with plentiful rain, but in areas with limited rain and especially with higher temperatures, sorghum will often out yield corn. This makes sorghum a popular grain crop on the southern and central plains. It is also dry on the northern plains, but fewer growing degree days limit the use of most of the varieties that are grown further south. Also, nighttime temperatures below 50o F can interfere with pollen development and shedding, which can greatly limit production in a self-pollinated plant. These lower night temperatures are not unusual in parts of Minnesota, North Dakota, and Montana, so although sorghum seems like a useful crop in parts of this region, it has not proved dependable to date.

The grain of sorghum varies in size, color, and texture. Much of the grain grown is reddish to tan in color, although some is also white or white with splashes of red color. In recent years white grain has been sought after to fill the need for flour with no gluten. Many gluten-free products depend upon white sorghum flour, and the market demand appears to be growing rapidly.

Members of the Northern Plains Sustainable Agriculture Society’s Farm Breeding Club have experimented with some white sorghum accessions donated to FBC by retired plant breeder and ND native, Mat Kolding. A primary focus of Kolding’s sorghum breeding at Oregon State University was early maturing, cold-tolerant lines, grown in areas subject to nighttime temperatures of 45-50o F during flowering (Kolding, personal communication).  These seemed like the lines needed to bring sorghum north and to simultaneously address the new gluten-free market for white-grained sorghum to assure good grain prices for new growers in the North.

FBC members, David Podoll and Steve Zwinger, screened 40 of Kolding’s 106 donated accessions, saving seed and documenting their performance and adaptability to ND growing conditions (funded in part by SARE: FNC10-828). Podoll created a bulk population of the white sorghum varieties that produced mature seed. In 2014 Podoll shared seed with FBC member, Owen Trangsrud, who planted 8 acres near Enderlin (Ransom County, ND). Our preliminary experiences provided proof of concept: these lines exhibit cold tolerance, early maturity, and growing potential for this region. We were able to save seeds readily. Additional evaluations of all the available lines in comparison with the earliest available hybrids, especially under organic management, were clearly needed in order to identify the most useful.

Objective 3: Demonstrate the agronomic and market feasibility of white sorghum as an alternative crop option for northern growers.

Objective 5: Obtain funding for two more years of replicated variety trials, identifying and providing farmers, processors and consumers with seed for the most desirable sorghum accession.

In 2015, 106 lines of white grained sorghum, some directly from Mat Kolding of Oregon State University and some that he had sent to the National Plant Germplasm System for maintenance and evaluation, were evaluated in a screen conducted near Prosper, ND (Objective 1). One additional line once grown experimentally in North Dakota and maintained by the NPGS (IS805) was also included. Professor Burton Johnson established and maintained the unreplicated screen that consisted of single rows of up to 82 plants. He collected the basic agronomic data (plant stand, number of heads, seed yield per head, etc.), bagged heads for pure seed increase (sorghum is largely a self pollinated crop), and held a field day with NPSAS Farm Breeding Club in September of 2015. At the field day (Objective 3) three NPSAS members joined Dr. Johnson and evaluated each line for head type (compact to loose on a scale of 1-5) and harvestability (likely ease of combine harvest on a scale of 1-5).

The data from 2015 were loaded into a spreadsheet and then shared with project team members at the NPSAS Farm Breeding Club Winter Meeting held in Medina, ND on 24 February 2016 (Objective 4). On April 6, 2016, FBC members met with representatives from SB & B, a grain trading company, and Burton Johnson at NDSU in Fargo to consider the results of the screen and chose which sorghum lines to move forward for the multi-location variety trial (Objective 2). Twenty-one of Mat Kolding’s lines were chosen based on apparent yield potential and grain quality. A mixture of lines formed by David Podoll and grown by Owen Trangsrud was chosen as a check and for border rows. Blue River Hybrids also provided two early hybrids, one very early hybrid with tan colored grain (57B6) and their earliest white variety (59CT4), to be used as experimental checks.

Later in May Burton sent out seeds to Steve Zwinger at the Carrington Research Extension Center and to Glenn Martin at the Dickinson Research Extension Center. These were planted in replicate in two row plots on organically managed land [65,000 plants per acre of PLS]. Seeds were also sent to Aaron Mahin and Owen Trangsrud  for single replicate evaluations on collaborating farms. These plots were planted with an Almaco push planter. In all cases weed control was performed with mechanical cultivation of various sorts. 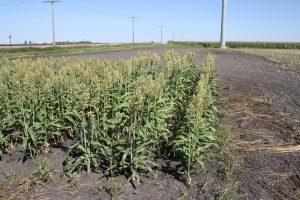 Sorghum evaluation plots near Fargo-Moorhead in 2016. 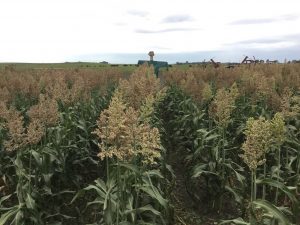 Unreplicated plots at a daughter site near Enderlin, ND in 2016.

In September, 2016 Steve Zwinger led an FBC field day (Objective 4) at Carrington to rate the plots once more. Our university partners harvested and measured the grain to determine yields. Aaron Mahin’s plots were damaged after cattle went over a fence and the grain lost. Owen Trangsrud threshed his harvested grain in early 2017 using one of the FBC head threshers. Data were then shared with FBC in early 2017 (Objective 4), and ANOVA of data from each replicated variety trial was used to evaluate the yield and other critical characteristics at each location.

Preliminary results of the three university trials were presented to FBC members in March, 2017 (Objective 4). Yields varied considerably, but significant differences were only observed in Dickinson and Carrington (Table 1). Differences in height were only significant at Carrington, where plants grew much taller than the other locations (Table 2). Most of the experimental lines proved to be significantly earlier to flower than the commercial checks, although differences were not significant at Fargo (Table 3). The commercial checks also usually had low test-weights, although in Fargo one of them was at the top of the list (Table 4). Test weights only met the desirable level of 56 or more lbs/bu at Fargo for only four of the varieties.

These results suggest that further work could be useful for clearly differentiating line performance and seeing whether commercially acceptable sorghum can be regularly grown in North Dakota. Results with one line, PI 574585, highlight what we are hoping to do with this variety screen and trial. This Mat Kolding line ranked in the middle to high for yield at each location (Table 1), it was also one of the shorter lines (Table 2), usually earlier than the check hybrids (Table 3), and usually had high test-weights (Table 4). This is very promising. We will consider these and other observations as we decide which of the lines to increase for further evaluations, commercial production, or breeding. We will use the results from the screen and the variety trial as the basis for seeking further funding for ongoing development of sorghum for the northern plains (Objective 5).

Table 1. Yield of experimental sorghum lines and checks at four organically managed locations in 2016. The Blue River Hybrid checks were 57B6 and 59CT4. The FBC Mix was a third check based on a mixture of several of these lines grown out previously. There were significant differences among varieties at Dickinson and Carrington. Varieties not significantly different from the highest yielder are highlighted in yellow. Those not significantly different from the second highest yielder are highlighted in red. There were no significant differences at Fargo and with only one replicate at Enderlin an analysis of variance was not possible.

Table 2. Height (inches) of experimental sorghum lines and checks at three organically managed locations in 2016. The Blue River Hybrid checks were 57B6 and 59CT4. The FBC Mix was a third check based on a mixture of several of these lines grown out previously. Differences among varieties were not significant except at Carrington. The shortest line there was significantly shorter than all but one other line.

Table 3. Days from planting to anthesis for experimental sorghum lines and three checks at three organically managed locations in 2016. The Blue River Hybrid checks were 57B6 and 59CT4. The FBC Mix was a third check based on a mixture of several of these lines grown out previously. Differences among varieties were significant only in Dickinson and Carrington. The latest varieties were significantly different than most of the other varieties (yellow), and so were the next latest varieties (red).

Table 4. Test weight (lbs/bu) of experimental sorghum lines and three checks grown at three organically managed locations in 2016. The Blue River Hybrid checks were 57B6 and 59CT4. The FBC Mix was a third check based on a mixture of several of these lines grown out previously. There were significant differences observed at all three sites. Test weights of 56 lb/bu are desirable in the marketplace.

The variety screen carried out in 2015 provided an opportunity to increase some seeds and for farmers, researchers, and grain marketers to discuss sorghum growing and marketing. The available seeds and data from our variety screen and trial now allow us to turn towards increasing seeds that have the greatest potential for high yields of valuable white grain, although further variety trials and other evaluations need to be conducted. This provides us a firm platform for obtaining further funding for such promising work.

No economic analyses were performed.

Some of our FBC members are very interested in the potential of white-grained sorghum, but there will be several years of seed increase needed before farmers can adopt any of these lines for production.

The potential of sorghum much further north than it has traditionally been grown is very big with these new, early, cold tolerant lines. More variety evaluations and breeding are needed, as well as basic agronomy research to help incorporate sorghum into organic and other sustainable cropping systems in this region where it is a new crop.