In 2007, the General Assembly approved a pilot program allowing a few Maryland farmers to make raw milk cheese that is properly aged for 60 days. The program was initially set to expire in five years, but the time limit was lifted in 2009 because farmers were having trouble getting banks to lend them money for cheese-making ventures with a fixed end date.

Despite the arduous health department regulations and production concerns, Maryland now boasts 23 artisan and farmstead cheese producers. Much of the industries success can be contributed to producers’ proximity to the markets in the Baltimore-Washington corridor and the public’s desire for all things local. Also, grow in the local cheese market has become an unstoppable force, in large part because of passionate cheese makers who are propelling the movement forward.

In the spring of 2015, a small group of producers and agriculture support specialists met to discuss the idea of forming a Maryland Cheese makers Guild to provide a common voice on regulatory issues and educational and marketing opportunities to help support the industries growth. This group received a NESARE grant to take their idea to the next level and form the Maryland Cheesemakers Guild. The Guild now has a formal structure, Board of Directors, a statewide membership, three large festivals it attends, and promotional ad educational opportunities for it’s members.  The goal of developing a statewide “Cheese Trail” was not attained due to problems that arose with the Maryland Department of Health about in-state cheese processing and a farm sale by one of the key grant participating farmers. Both these situations have now been reconciled and the Guild plans to move forward a statewide outreach at the Maryland State Fair in 2018.

Website development continued under this project and can be viewed at http://www.mdcheese.org/

and a link to a Facebook page resides there.  Outreach was focused Maryland to reach farmers and agricultural service providers at agricultural events and fairs.

As of September 2015, 13 states have formed Cheesemakers Guilds and the Southern Cheesemakers Guilds represents another six states collectively.  All these Guilds have similar goals and objectives as the proposed Maryland Guild would champion and purported an increased quality and quantity of product marketed.  These existing guilds provide excellent examples of organizational structure, member activity, and educational resources from which to draw. But a Maryland Cheese Guild operating in the Mid-Atlantic region with excellent market outlets could also contribute to the collective knowledge base Guilds offer members.

Several established Maryland Cheesemakers already recognized the need and value of forming a professional Guild to support their industry and have self-selected to start the nucleus of an organizational group. Maryland now has both a Brewers Guild and a Distillers Guild.  These Guilds have experienced similar regulatory hurdles and marketing challenges for their craft beverages as have the cheesemakers . Kevin Atticks is the Director for both these groups and is willing to help shepherd the cheesemakers into a Guild as well.

This project can glean results and outcomes from other SARE grant funded projects that included organizing producers and sales. These include:

May 2016 -  Open house, dinner, and Guild organizational event held at shepherd’s Manor Creamery. Over 50 producers and support agency people attended the event. Member recruitment and information was distributed by Guild Secretary and Extension Specialist, who coordinated the meeting.  Kevin Atticks, founder of Grow and Fortify, spoke to the group about the value of guilds working to promote specific products. He encouraged members to participate in joint marketing events with the wine and distillers Guilds in Maryland. Discussion resulted in developing a list of  Guild Committees and recruiting chairs and members. The group voted to formalize establishment of the Guild and to expand sections of the website.  Farm tour of one of the project partners.  Collected data of key issues facing producers.  Expanded sections of the website.

June 2016 -  Worked with the Maryland Farmers Market Association to develop and distribute “Buy Local” marketing rack cards for use at farmers’ markets, festivals, county fairs and other point of sales outlets. Established Board of Directors and Officers for the Guild. Working with Guild Secretary, farmer partners, and Ag Economic Development Specialist.

September 2016 -  Four producers participated in the MD Wine Festival. Event attracts 25,00 annually. Producers marketed product and distributed information in a dedicated tent.  Guild member meeting held at festival. By-laws adopted, Board of Directors elected, and Officers elected. Met with legislative liaison, Maryland Department of Agriculture, and Maryland Department of Health and Mental Hygiene to discuss need for changes to regulations and advocate for Health Department Omsbudsman to act as a liaison between producers and the Health Department. Member participation and consumer outreach at MD Wine Festival.

November 2016 - Guild Membership meeting and Project Progress report.  Determine any changes to plans or program at this point in the project.

The Maryland Cheese makers Guild now has a formal structure- By-Laws, a Board of Director’s Officers, Standing Committees, and 28 paid members.

The Guild website, Facebook page, and membership recruiting materials have been updated to reflect the formalized status.

Discussions are underway for Guild members’ to participate in consumer outreach at MD Breweries and for Cheese guild member to join the Grow and Fortify organization for joint promotion.

Regulatory controls and revisions have stalled as the Maryland Department of Health and Mental Hygiene, in July, began challenging Maryland cheese makers’ product recipes for moisture.  The recipe’s were formerly approved and changes will now cause producers substantial costs and possible lose of customers due to changes in the product’s texture and flavor.  Discussions continue at this time.

Every producer had their own set of challenges- some were with production methods, most with their marketing skils, and one with a strong personal situation.  The challenges of forming the guild and moving things forward was to first keep members legal for making cheese in Maryland.  this involved mediating between regulators and producers so each could obtain their desired result. Regulatory changes take a very long time and it is one of the factor that drove this project into an extension period.  As with every project, the busy producer were the best leaders for the project. However, this can again tax their time and resources and the need to step back for a time for the lead cooperators in the project, again pushed back the timeline for completion of the projects goals.

However, the extension period has actually worked in favor of the Guild as producers who may have been doubtful of it's continuity and resources see that it has established on sound footing and is moving forward. A year-end meeting of the Board of Directors resulted in an outline to launch a new marketing program for Maryland cheese and for increasing Guild membership.

Increasing the quality and quantity of cheese produced was a goals but the greater goal was to increase producers profitability while raising public awareness to the availability of a locally produced cheese product. Producers have much invested in their individual operations and are hesitant to share time and resources lest they lose a market share.  For the Guild to be successful, producers must continue to see it as a positive resource where "a rising tide lifts all ships". This will require more time than allotted in this grant period. Strong leadership by successful Maryland cheesemakers will be the catalyst for completing the goals originally set forward in this proposal. 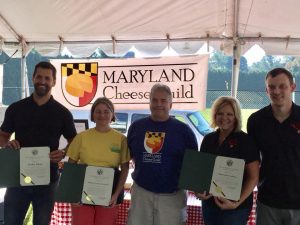 The educational outreach for this project was two-fold. The first pathway was to the producers through newsletters, emails, website updates, and direct calls.  The out reach to other service providers and other agricultural community segments was through demonstrations at fairs, participation for two years in the Maryland Wine Festival and the Maryland Grower/Buyer workshop. Other Extension educators and industry support program were invited to guild meetings, farm tours, and provided support resources to the producers especially in working with the State Health Department.

Scheduled meetings, collaborative marketing events, on-farm workshops, website development, and consumer education materials were shared with the participating project partners during the course of the project in order to develop and refine the process and output materials.

Communication pieces calling for membership recruitment for the Guild and the mission of the Guild were shared across a variety of media outlets, through social media tools, Extension newsletters, and by word-of-mouth among the cheesemakers themselves.

The key area of changes in knowledge were in the areas of product development to meet Federal processing regulations. Also these farmers were those most active in formalizing the Guild so they acquired additional knowledge in organizational structure for a statewide group including member recruitment, website development, and organizational legalities.

The Maryland Cheese makers Guild now has a formal structure- By-Laws, a Board of Director's Officers, Standing Committees, and 28 paid members.

The Guild website, Facebook page, and membership recruiting materials have been updated to reflect the formalized status.

Discussions are underway for Guild members' to participate in consumer outreach at MD Breweries and for Cheese guild member to join the Grow and Fortify organization for joint promotion.

Regulatory controls and revisions have stalled as the Maryland Department of Health and Mental Hygiene, in July, began challenging Maryland cheese makers' product recipes for moisture.  The recipe's were formerly approved and changes will now cause producers substantial costs and possible lose of customers due to changes in the product's texture and flavor.  Discussions continue at this time.

Working with any group of producers can be a little like "herding cats". Fortunately, there were two strong farmers that acted as the leaders to keep the project moving forward. The surprise component in the project was that the volunteeer supports actually were an impediment at times. they had a sense of ownership of the"Guild" since they had been working with the group prior to the grant project and formalization of the Guild structure. The farmers wanted to keep the volunteer involved and were reluctant to disagree at any step in the process with her inclinations.  This proved to be an impediment to working with the Maryland Department of Agriculture in particular because of a communications breakdown.  As always, strong leadership from within the producer group itself is key to accomplishing the project's goals. Commitment and responsibility for tasks shouldn't be handed off to non-stakeholders