The purpose of this project was to investigate the performance of jujube during establishment (2 year) in on-farm studies in Mississippi. Jujube has been reported to have no significant incidence of pests and diseases, so it was thought to be a good crop for sustainable/organic production in Mississippi. However, it is practically an unknown fruit to consumers in the U.S. and there is no information about establishment and production in Mississippi. Four cultivars, ‘Sherwood’, ‘Sugarcane’, ‘GA866’, and ‘So’ were selected for establishment at Cherry Creek Orchard in Pontotoc Co., MS in 2014. Trees were trellised and drip irrigated, and were monitored for growth, pest, diseases, flowering and fruit yield. Also, a taste and acceptance evaluation was conducted in Mississippi and Virginia. Growth for 2 year from planting in the field was about 140 cm (over 4 feet) average for 'Sherwood', 'GA866' and 'So'. Minimal late season incidence of diseases and leaf feeding by insects were observed in both years. Diseases were identified as Cercospora, Phoma and Colletotrichum spp. Root knot, reniform and other nematodes were detected in low amounts; however, the importance of these nematodes could not be established because there are no thresholds for Jujube. Poor fruit set in the second year raised concerns from the participating farmer about reliable production under Mississippi conditions. Therefore, data from more years are necessary to determine more accurate performance. In addition, taste trials ranked fresh fruit as 3.3 and dry fruit as 3.9 in a scale of 1 to 5, being 5 liked very much, so it may have mainly a niche market for ethnic groups with a particular interest for the fruit. The generated information was presented to stakeholders at the Northeast Mississippi Fruit and Vegetable Farmers Association and the Southern Sustainable Agriculture Working Group annual meeting. Although there was interest in learning about jujube, it was difficult for farmers to consider the crop without more years of data.

With the exception of blueberries, production of fruits and berries in the south is difficult because the climate is not favorable for most of the consumer preferred fruit crops. Raspberries, blackberries, peaches, apples, and backyard plums are grown in the south, but the insect and disease pressure makes their production unsustainable. Production of high quality fruits in Mississippi and the south that are appealing to consumers requires rigorous spray programs to reduce pest and disease incidence. This makes the production system dependable of chemical pesticides which are detrimental for the environment. In addition, pesticides are ineffective to some diseases and the infection may reduce production, quality and in some cases can kill branches or the whole tree. This obligates the farmer to incur in costly replacement of those infected trees and/or shortening of the orchard productivity and life span (Westwood, 1993). Therefore, productivity of the orchard and the sustainability of the production system are compromised affecting the livelihood of the farmer.

Sustainability is based on diversity in the production system as a whole and Jujube (Ziziphus jujuba Mill) appears to have potential for production in Mississippi and the south. The Hypothesis is that jujube may be an excellent alternative crop for sustainable/organic production systems in the southern region because it seems to have little or no significant incidence of pests and diseases in the U.S. (Gilman and Watson, 2011; Yao, 2012). Therefore. It has the potential to increase sustainability in a fruit production system. However, Jujube is practically an unknown fruit to consumers and there is no information about establishment and production in Mississippi. Similarly, there is no information on potential pest and diseases that might be affecting the crop in Mississippi.

Jujube or Chinese date is a deciduous tree with an open irregular form. The tree can be formed as a single trunk and can reach 15 to 35 feet in height with 10 to 30 feet in diameter. It has four types of shoots: primary (extension) shoot, secondary shoots (side branches), mother bearing shoots (fruiting spur), and fruiting shoot. It blooms in the spring with small clusters of fragrant yellow to white flowers 0.15 to 0.30in. The jujube fruit is a drupe with one pit. It can be oval to round 0.5 to 1in long. Production does better in full sun on any well drained soil, acid or alkaline (Gilman and Watson, 2011; Yao, 2012). Since there is no or little information about jujube establishment and production in Mississippi, research to generate this information is warranted. Performance of different varieties, establishment and formation, pruning, pests and diseases, harvest and storage, and consumer acceptance would be important information necessary to evaluate potential production of this fruit crop in Mississippi and the southern region.

The purpose of this project was to generate information about establishment, production and incidence of pests and diseases in Mississippi, and consumer acceptance of jujube in Mississippi as well as in Virginia. Three trees from each jujube cultivar, ‘Sherwood’, ‘Sugarcane’, ‘GA866’, and ‘So’ were planted at Cherry Creek Orchard in Pontotoc Co., MS in the spring of 2014 (Figure 1) and two more from each cultivar at Crystal Springs Farm Market, Copiah Co., MS in the fall of 2014 (Figure 2). Trees were trellised because of the tall slender shape at the time of planting. The orchards were drip-irrigated periodically and soil moisture sensors were installed to monitor soil water availability. Soil and air temperature, relative humidity and rain were monitored as well to determine environmental conditions associated with growth, and potential insect/disease outbreaks. Nutrient status of the trees was also checked in the spring by tissue analysis. Growth and phenological events (vegetative and reproductive bud break, flowering period, fruit set, and time to harvest) were determined also. Agronomic parameters were tree size (height, trunk diameter and total growth), fruit set, and yield. Although pest and disease incidence are not significant in the US (Gilman and Watson, 2011; Yao, 2012), trees were monitored and samples submitted to the Extension Plant Disease and Nematode Diagnostic Laboratory for identification. Soil was tested in the fall of 2014 and 2015 for nematode populations.

Because of the small amount of fruits harvested in both years, samples were used mainly to determine consumer acceptance. In 2015, samples from ‘So’ and ‘Sugarcane’ were also used for quality attributes (soluble solids, moisture and antioxidant capacity) at the Eastern Shore Agricultural Research and Extension Center (AREC), Virginia Tech. Therefore, postharvest shelf-life was not evaluated at this time. In 2014, fruits were given to employees at the Cherry Creek Orchard in Mississippi for tasting and ranking on a scale 1 to 5 (5 being liked very much). In 2015, all fruits were sent overnight to the Eastern Shore AREC for evaluation and ranking in the following parameters: appearance, skin, sweetness, texture, and overall acceptance. Samples of ‘So’ and ‘Sugarcane’ were divided for tasting, soluble solids, moisture content (dried at 50oC for 7 days) and antioxidant activity determinations. Fresh and dry fruits were ranked for consumer acceptance by Eastern Shore AREC personnel. The antioxidant activity was determined by the Trolox equivalents (TE) method (Brand-Williams et al. 1995). 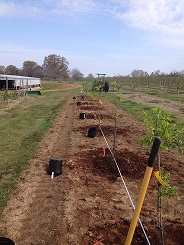 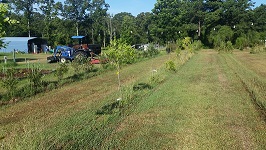 Results from 2 year growth at the Cherry Creek Orchard indicate that the cultivars ‘Sherwood’ and ‘Sugarcane’ are similar in structure with few branches compared to ‘GA866’ which is a fuller more branched tree. The cultivar ‘So’ is a tree with zig-zag branch structure and large thorns. Growth of 'GA866', 'Sherwood' and 'So' was similar and over 140 cm (Approx. 4ft and 8in) in 2 years and superior than 'Sugarcane' (Figure 3 and 4). The diameter of the trunk slightly above the graft had increased more than 25 mm for all but Sugarcane, which was less than 20 mm. Small flowers appeared in April of each year and continued into July (Figure 5). All cultivars bloomed in the first year, but only ‘Sugarcane’, ‘So’ and 'Sherwood' set fruits that were harvested (Figure 6). Average yield was highest for Sugarcane with 764 grams in 2014 while GA866 produced no fruit in both years (Figure 7). A higher production was expected in the second year (2015), but a wet/rainy spring appears to have reduced fruit set. Also, in 2015, most fruits were at the top of the trees and were not ready to be picked until late September; while, in 2014, fruit harvest occurred from late July through September. Yields ranged from 0 to over 1kg (over 2lb) per tree depending on cultivar and specific tree. In contrast, tress planted at the Crystal Springs Farm Market farm set no fruits at all in the first year growth.

To accomplish objective 2), trees were monitored for insect and diseases and samples were sent for identification. Few stinkbugs, but no significant signs of damage by insects was observed in both years. In the fall, minimal damage by leaf spots was observed. Cercospora sp., Phoma sp, and Colletotrichum sp. were identified from leaf samples. Fruit showed some dark spots, but no fungi were isolated from them. Soil samples analyzed for nematode populations resulted in levels of 19 and 450 individuals per pint of soil for Ring and Reniform in 2014, respectively. In 2015, nematode populations changed to 52, 33, 19, 14, and 90 individuals per pint of soil for Root-knot, Reniform, Spiral, Dagger, and Ring nematodes, respectively. Nonetheless, the importance of these nematodes could not be established because thresholds for Jujube were not found.

To accomplish objective 3), small tasting trials were conducted. Regardless of the cultivar and taste location, the average rank (1-5) for fresh fruit for both years was 3.3. Dry fruit in 2015 was ranked as 3.9. The main comments were the relatively low sweetness and thick, leathery skin. Soluble solids for ‘So’ and ‘Sugarcane’ were determined for in 2015 and ranged between 4.5% and 9.7%, regardless of cultivar. Moisture content in the flesh also varied regardless of cultivar and ranged between 76% and 53%. Similarly, antioxidant capacity ranged between 20 and 600 umol TE/mg DW flesh. Differences among cultivars were not found due to the variability of the data. 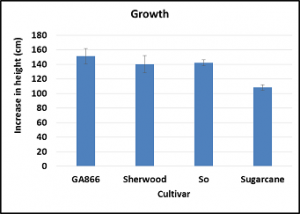 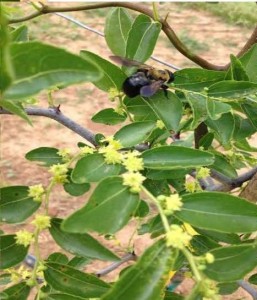 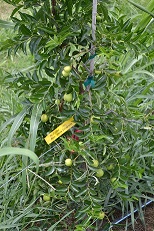 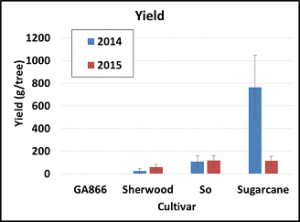 The information generated in this 2 year investigation was presented to stakeholder in Mississippi and the southern region. The North Mississippi Producer Advisory Council (PAC), composed by farmers from every commodity produced in the area, meets every year to discuss current research and to express their main concerns to University personnel. The results were presented and discussed with members of the North Mississippi Fruit and Vegetable Farmers Association at the PAC meeting in February 18, 2016, Verona, MS. Attendance to this commodity meeting is usually 10-20 farmers. Similarly, a poster was presented at the Southern Sustainable Agriculture Working Group in January 27-30, 2016, Lexington, KY. Attendance to this conference is usually over 1,000 farmers and industry personnel from the southern region. In addition, results were presented to peers at the Southern Region ASHS meeting February 5-7, 2016, San Antonio, TX.

Jujube may have the potential to increase diversity and sustainability of small farmers in the Southeast because it appears to have little or no significant pests and diseases in the US. Although 2 year data is not enough to draw conclusions, results from observations of pests and diseases appears to support this idea. However, poor fruit set and harvest in the second year raised concerns about the reliability of production in Mississippi. In addition, the limited acceptance from the taste studies suggest that it may have mainly a niche market for ethnic groups with a particular interest in this fruit. Therefore, more data is necessary to determine production reliability in the long term and acceptance among ethnic groups.

Jujube trees will continue to be evaluated until full production to generate long term information on production, acceptance and potential pests and diseases. Once this information is available, more reliable conclusions and recommendations will be obtained.