Overwintering strategies were evaluated for meat goats in Alabama in collaboration with two meat goat producers. We wanted to demonstrate that limit grazing of cool-season annuals or cool-season annual-legume mixtures could provide a high-quality grazing system over the winter months to be more economical and sustainable compared to the traditional approaches. Based on the observations for two years the traditional approach of feeding hay with soyhulls appears to have performed better than the other two approaches including limit grazing.  However, under favorable weather conditions, limit grazing holds a great promise.

The meat goat industry continues to expand in the U. S. due to demand driven mainly by increasing ethnic population whose meat of choice is goat (USDA/NASS, 2010). Efforts are being made to attract traditional Americans towards eating goat meat. The goat meat has potential health benefits such as low fat and low cholesterol contents compared to other red meats.  Many ethnic markets such as H-Mart in Atlanta areas are selling goat meat. Recently a private company called GOTCHA GOAT has begun to supply American grown goat meat and goat products to consumers. Almost 80 Kroger stores in and around Atlanta carry GOTCHA GOAT products in the Southeast. But the majority of the goat meat demand is fulfilled by the imported goat meat, mainly from Australia (USDA/NASS, 2016). In 2016, U.S. imported more than 98.5% goat meat from Australia to meet the domestic demand. The domestic supply is, however, sporadic, and haphazard with substantive variations in animal availability, body weights and condition at slaughter, as well as variable carcass characteristics (Machen, 2009). The meat goat production offers a viable form of sustainable livestock production, particularly for individuals with limited financial resources, limited land availability, and limited physical abilities. However, the growing demand has not necessarily translated into larger profit margins for many native goat producers who are already engaged in meat-goat production. Several factors have contributed to this situation. Many small and limited resource farmers lack the expertise to carry out a sustainable goat management system. Besides, the meat imported from Australia is cheaper than the meat produced in the U. S. Most of the goat meat imported from Australia is harvested from extensively managed “feral” goats now called as “Rangeland Goats” and slaughtered according to lamb exportation guidelines (Stanton, 2005). The meat imported from Australia is available on a year-round basis.

One of the potential ways of reducing the cost of production is by alleviating the feeding costs because feeds account for almost two-third of the cost of meat-goat production. Feed costs are relatively high in Alabama and the surrounding states although the production is pasture-based. It is because most of the goat producers still do not have improved high-quality pasture that can produce on a year-round basis. So, during the winter time, when there in not much forage available for grazing, producers have to supplement their goats with high-cost feedstuff such as agricultural byproducts, hays, and commercial feeds. These feed supplements may not be economical for maintaining goats over the winter. Many cooperative extension publications highlight the benefits of winter grazing for beef cattle but there is virtually no information regarding meat goats. But the question is “Is it economical to grow winter forages for meat goats? Can we raise goats like we raise cattle? What is the cost-effectiveness of winter grazing for meat goats?  There is a need to develop a sustainable feeding strategy for successful overwintering of goats when forage quality and availability is low, and disseminate the promising option among the producers and other stakeholders.

Limit-grazing goats for a 2 or 3 days a week by accessing them to high quality cool season pastures for a few hours could provide the necessary nutrient requirements while avoiding overgrazing. This has been practiced by beef cow-calf producers successfully.

Producers need on-farm demonstration trials to directly see this practice and compare with other practices for a sustainable meat-goat production. The economic analysis each system will provide an insight in understanding of which supplementation strategy is sustainable in Alabama and surrounding states with similar climatic conditions. The project compared three overwintering strategies and evaluated economic profitability. Two farmer cooperators have been selected from Dallas and Lee Counties of Alabama to participate in the project. Each mentor farmer represented a treatment. These farmers served as model farmers to help other small farmers in the surrounding counties and across the region.

The purpose of this project was to compare production and economic performance of different winter feeding strategies by Alabama mentor goat producers.  The specific objectives are to:

An overwintering on-farm demonstration trial was conducted in Alabama. Two farmer cooperators participated in this project Gerald Goodman (Opelika) from Lee County and Bennie Simmons (Plantersville, Selma) from Dallas County. They each had at least 30 meat goats. Both producers had similar genetics of goats. The treatments are given below. Hay was provided free-choice while supplements were fed at 1% of the body weight. The supplements (soyhulls and 12% protein supplements) were provided with the grant money for each producer. Similarly, hay was provided to each producer from the same source to minimize variability. Ten animals were randomly assigned to each treatment and the whole herd productivity of each group was measured. The variables measured included body weight change, body condition score change, FAMACHA scores, death loss if any, costs of feeding to each group, pasture growth, fecal egg counts, and forage biomass production. Soil tests were conducted prior to planting to determine fertilizer needs. We also applied needed amounts of lime. We planted a combination of grass-legume mixture (ryegrass-crimson clover) in two acres in each location. Annual ryegrass and combined together at the rate of 30 lbs. of ryegrass plus 10 lbs. of crimson clover per acre. Animals were fed hay and soyhulls until the forage was ready (at least 6 inches tall). The forage growth was ready by March only. We provided access to pasture for seven hours a day for 3 days a week. A 50:50 mix of trace mineralized salt and dicalcium phosphate was provided on a free-choice basis for goats. Water was provided ad libitum. The feeding plan was not to provide balanced ration but to mimic what goat producers generally practice. Each producer kept records for the costs incurred for input costs. Records were kept on actual amount consumed by animals along with hay used. Prior to introduction of animals into pastures, goats were dewormed with cydectin (moxidectin; Fort Dodge Animal Health, Fort Dodge, IA, USA) and vaccinated with Clostridium perfringens type C and D-Tetani Bacterin-Toxoid (Bayer Corp., Shawnee Mission, KS, USA). Gastrointestinal parasitic load in goats were monitored by using FAMCHA reading fortnightly by the producer themselves and once a month by the project team.  . Data were analyzed by

The available forage mass are presented in Table 1 given below. We were not able to collect any forage biomass samples in April of 2015 from the Gooden farm.

The 12% protein supplement was purchased from a local feed supplier. The total digestible nutrient (TDN) content was 54%. This TDN value is similar to typical Alabama hay. Gerald Gooden planted his winter forages on time as recommended by the project team in 2016. Unfortunately, the severe cold weather we experienced in the winter damaged the forages. We were able to salvage forges by top-dressing with nitrogen fertilizers. The forages slowly came back but the plant vigor was missing. Figure 1. A 12% protein supplement and soyhulls (SH) used as winter supplements for goats. The soyhulls were also purchased from the same feed supplier to provide similar quality supplements to both producers. The crude protein content was 11%. We did not graze animals earlier in order to have adequate forage growth. The grazing began in March of each year (Figure 2).  The forage growth was better in 2016 in Gerald Gooden’s farm in 2015. We originally provided only 1 lb of supplement but the weight loss with these two treatments made us increase the amount to 2 lbs./goat/day. The growth of cool-season annual mixture was excellent in Gooden farm and the grazing season was extended until the end of April.  The SH group lost the minimum body weights compared to the other two treatments. The maximum amount of loss occurred in the 12% CP supplemental group followed by the limit grazing treatment (Figure 3. The FAMACHA scores were higher for the SH group at the beginning but at the end of the grazing period, the SH group has the lowest score indicating that goats in the SH group had the fewer infection with H. contortus (Figure 4). Figures 5, and 6 show body condition scores, fecal egg counts for Bennie Simmons farm for 2015 while figures 7, 8 and 9 indicate fecal egg counts, body condition scores and FAMACHA scores for Gerald Gooden farm for the year 2015.

Overall results indicate that the goats in every overwintering strategy lost weights during the winter months. This was expected because they were fed maintenance diets only. However, the soyhulls treatment group lost the least amounts of weights during the winter months. Survival and weaning rates were similar among different treatment groups. We had hypothesized that the limit grazing group would be more economical but results did not support our hypothesis. Many reasons have contributed to this outcome. The explanations have been provided in the Farmer Adoption Section. Based on the study, it is recommended that meat goat producers can feed SH in the winter months along with free-choice hay if weather is not favorable to grow winter annuals. 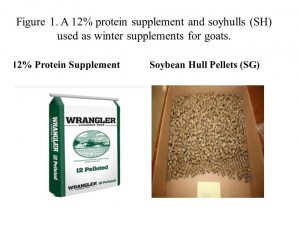 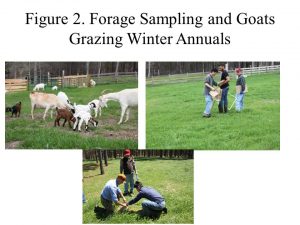 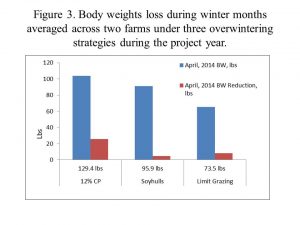 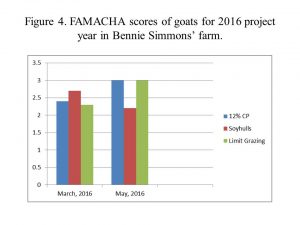 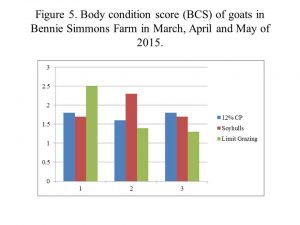 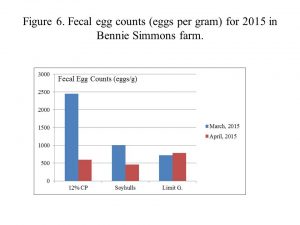 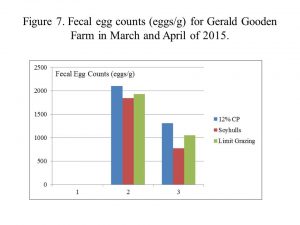 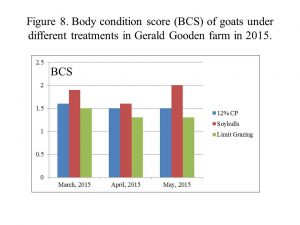 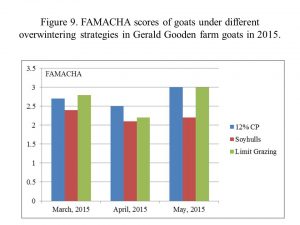 A field day was organized in Plantersville, Selma Alabama during the project period. The collaborators made presentations about different methods of overwintering strategies. The field day and field visit resulted in increased knowledge gained by 11 goat producers about winter grazing management and supplementary feeding. (See figures below).The new cooperating partner planted his winter forages on time as recommended by the project team. Unfortunately, the severe cold weather we experienced in the winter damaged the forages. 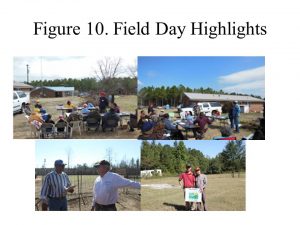 The costs for supplementary feeding meat goats during winter months were compared between two farms with similar number of goats over a period of three months. The feeding costs were averaged for two years and compared between two farms for the project period.  The feeding costs were 9.36 cents/goat per day for Simmons farm while the values were 25.5 cents per goat per day for Gerald Gooden farm. The costs included supplemental costs including dewormers, etc. for each treatment. The costs were spread for all 30 goats but did not include grazing costs. Higher feeding costs in the Gerald Gooden farm may be due to better feeding practices adopted by the producer superior and heavier animals compared to the other producer.

Cooperating farmers were fully convinced that the overwintering with cool-season annuals with legumes holds a great promise to reduce feedings costs in the winter. However, farmers realized that the grazing is fully dependent on weather conditions. They also realized that small and limited resource farmers face several challenges with regards to adequate equipment. The over seeding was difficult duet to the fact the exiting grass outpaced the establishment of winter annuals.