A proposal was submitted to quantify nitrate levels in aquaponic systems to determine recommendations to producers interested in this emerging industry.

Results indicate that actual nitrate levels were very different from the perceived readings obtained by the 2 producers. While the HD system regularly measured at least 80 ppm, our measurements indicate that the nitrate level was 35.76 ppm on average. Similarly, while the LD system was rated at 5 ppm or less (as measured by the producer), our probe measured a 13.9 ppm for an average of 50,595 measurements.

The ‘sticks’ are not accurate and producers need to use better tools to quantify their nitrate levels.

Water temperatures were almost identical over the duration of this project (about 180 days) in both a greenhouse and a high tunnel. This is good news for aquaponics in Texas as there's no need to invest in an expensive greenhouse.

To complicate the situation, fish feeding rate is not accurately measured or tailored to actual fish weight. Instead, a grower relies on visual observation of the fish feeding habit and quits adding feed when the fish stop feeding. This results in either over- or under-feeding. More importantly, this results in a fluctuating nitrate level in the water which is a waste of money.

Finally, most producers rely on ‘calibration sticks’ to measure pH, nitrate, nitrite, and ammonia. These ‘sticks’, although cheap and fast, are not accurate or reliable by any means. Producers regularly over- or underestimate these parameters and base the feeding amounts based on those unreliable readings.

This proposed research aimed at conducting an experiment at Sand Creek Farm to evaluate 3 nitrate concentrations in an aquaponic system grown with ‘Rex’ lettuce. The current nitrate level is 5 ppm, as measured by the producer. A complete system (about 1,000 sq ft production area) housed in one tunnel (about 3,000 sq ft) was to be used for each rate. The two other treatments planned were 20 ppm and 80 ppm. Increasing the nitrate levels was to be achieved by increasing the fish stocking density and/or spiking with nitrate fertilizer. However, due to the unwillingness of the producer to adjust nitrate rates to higher levels which required additional filtration and settling tanks, two other producers were sought with nitrate rates suitable for this research proposal. Sustainable Harvesters in Hockley measures nitrate levels at 80 ppm at least, and Ag Farm in Bryan measures nitrates at about 20 ppm.

Therefore, one digital probe (Hanna Instruments) was installed at each location to conduct this research. Producers were asked to record seeding and harvest dates, and time and amount of fish feed used. The probe is an independent unit calibrated to take a reading every 30 minutes and can measure simultaneously nitrate, electrical conductivity (EC), water temperature, and dissolved oxygen (DO). Growers were asked to continue their daily nitrate level measurements to compare to the probe readings.

With one probe per location/nitrate rate, our vision was to quantify actual nitrate levels, daily fluctuations of nitrate, final harvest size, and leaf nitrate content.

From these results, our goal was to:

With these goals in mind, we expect to save producers money and increase their profitability through one of these decisions:

Probes were installed at each of the 3 locations. However, a month later when it was time to download the data, probe located at Ag Farm in Bryan was malfunctioning and didn’t record any readings. Therefore, the rest of this research is based on 2 locations that is adopting the LD concept (5 ppm) and HD concept (80 ppm) of nitrate levels.

At the end of the trial, samples were collected from each of the remaining two locations and were sent to Soil Testing Lab at College Station to measure leaf nitrate content. Samples were weighed in grams before mailing.

A total of 58,020 and 50,595 readings were collected from HD and LD, respectively. Data was collected for 199 days at the HD system and for 177 days at the LD system. Figures 1 and 5 show the nitrate fluctuations at HD and LD, respectively. Nitrate lowest reading was measured at 10 am with the HD system, while it was lowest at 5 pm in the LD system. Figure 1 shows that the nitrate in the HD system ranged between 37 and 34.7 ppm, while figure 4 shows that the nitrate in the LD system ranged between 14.1 and 13.5 ppm. Each data point of figures 1 through eight is an average of 199 days (HD system) and 177 days (LD system). Figures 1 and 4 indicate that the actual nitrate levels were very different from the perceived readings obtained by the 2 producers. While the HD system regularly measured at least 80 ppm, our measurements indicate that the nitrate level was 35.76 ppm on average (Table 3). Similarly, while the LD system was rated at 5 ppm or less (as measured by the producer), our probe measured a 13.9 ppm for an average of 50,595 measurements (Table 3). The lowest recorded nitrate level was 2.7 ppm at the HD system and 0.15 ppm at the LD system. Similarly, the highest nitrate level was about 75 ppm for both systems (Table 3). Our first conclusion is that nitrate measurements are far off what the producer is actually measuring or basing his feeding rate. This is a proof that the ‘sticks’ are not accurate and that producers need to use better tools to quantify their nitrate levels. Also, a producer who wishes to have 5 ppm, when in reality he/she is getting about 13 ppm needs to revisit the feeding regimen and same money in feed cost or fish stocking density.

Electrical conductivity (EC) which measures the total number of anions and cations in the water was recorded at 387 µS/cm with the HD system and 616 µS/cm with the LD system. This is counter-intuitive since higher feeding rates should results in more waste, which results in more soluble ions in the water. Additional analysis by a water chemist is needed to explain this and is beyond my expertise.

Water temperature and dissolved oxygen (DO) didn’t difference much between the two systems. See Table 3 for actual numbers. It is important to note that the HD system is housed in a controlled environment greenhouse while the LD system is housed in a high tunnel. Similar water temperature (about 70F ± 7F) with a range of 59F for low and 85F for high is a surprising result to the author. This is good news to potential aquaponic producers in Texas who are debating whether to build a greenhouse or high tunnel. In terms of water temperature suitable for plants and fish health, both structures offer the same benefit.

On the other hand, dissolved oxygen (DO) followed almost an identical trend as the nitrate level in both HD and LD systems. This is useful news to a producer who wishes to determine DO without purchasing expensive DO probe. Using the figures below, a grower can estimate his/her DO content based on the nitrate level measurement. However, this is not critical as producers know they must have sufficient airstones installed in their troughs. I recommend an airstone every 3-5 ft depending on the cfm of the air pump.

As indicated above, producers were asked to record feeding amount and frequency. Both producers fed their fish twice daily. However, the amount of fish feed was very different. While the LD system used about 1.6 lb of fish feed per day, the HD system used about 4.7 lb / day or 3 times. However, 3 times more feed in the HD system resulted in only about 2.5X higher nitrate compared to the LD system (35.76 ppm vs. 13.9 ppm). It appears that some nitrate loss has occurred either in the fish production or through evaporation or through other means.

In terms of lettuce yields, a sample of 15 plants was collected from the HD system and weighed at harvest or 37 days after seeding. On average, plants weighed 3.8 oz (Table 2) and had leaf nitrate content of 5,253 ppm (Table 3). For the LD system, a sample of 10 plants was collected at 80 days after seeding and lettuce weighed on average 7.9 oz (Table 5) with leaf nitrate content of 7,321 ppm (Table 6). Plants at both locations were not of the same age and no conclusions can be made on which system is better.

Table 7 compares all the measured or calculated data between the HD and LD system.

To calculate leaf nitrate content, use the following formula:

Two workshops were organized, one at each research location, per proposal requirements.

A workshop was held at the HD system on 12-10-2015 and was attended by 10 participants. 100% of participants reported an increase in knowledge and the knowledge increase ranged from 81% to 95% on various aspects of aquaponics, such as principle, parts of a system, how to build a system, etc. A total of 40 practices were intended to be adopted by the participants or 80% of total number possible. An average of $11,577 per person were indicated as potential economic benefit from attending this workshop and the likelihood of recommending a similar program to others was 93%.

At the LD system, a workshop was organized on 3-2-2016 and similar trends were observed. At this workshop, $25,972 per person was reported as potential economic benefit with 81% likelihood of recommending this program to others. 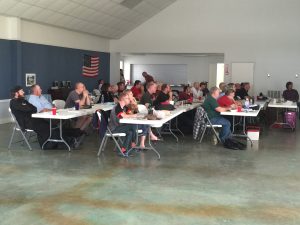 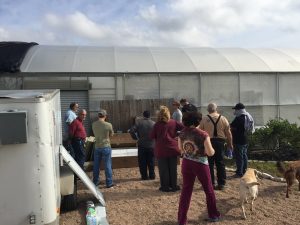 I am very grateful to Southern SARE for the granting me the funds to conduct this research. As I have started research on aquaponics on my own system, I am confident this grant will continue to impact my research, the clientele I serve, and the producers of Texas for years to come.

Both locations, the HD and LD systems, are still operating per usual operating practices and are have not expressed interest in modifying their current practices. For the producer, change is difficult and they currently are comfortable with the generated income from current practices. additional research is needed to convince them that a lower (for the HD system) and a higher (for the LD system) nitrate level is more profitable.

Aquaponic is still at a fledgling stage in Texas and nationwide and addition research is needed to determine which nitrate level is most economically profitable to the producer.