Habitat management strategies that increase the functional agrobiodiversity of agroecosystems have been associated with reductions in the number of many herbivore pests, in temperate, subtropical and tropical cropping systems. Increasing the functional diversity of agroecosystems by combining crops with non-crop, secondary plant functional groups that provide resources for natural enemies and/or alter the behavior and distribution of pests has been a particularly effective approach to pest management. A common form of functional diversification strategy used in IPM is the push-pull approach, or the spatial integration of secondary plant species with pest attractant and repellent stimuli within agroecosystems. Typically, repellent plants (the “push” component) are placed within close physical proximity of a field (the “pull” component). The net movement of pest species is therefore away from the susceptible crop area and into a nearby stand of attractant plants. While push-pull approaches are pest-specific, they can also be developed to lure beneficial insects towards the source of concentrated pest populations to maintain low pest numbers and reduce pest spillover into the crop. The incorporation of natural enemy and pest attractant plants within fields and along field margins has been shown to substantially increase parasitism and mortality levels in multiple species of aphids.

In this project, we explored the utility and effectiveness of a push-pull technology to manage pests in South Texas. While push-pull pest management is by no means a new approach, very little is known on the role of deploying repellent and attractant plants in tandem in order to reduce pest populations in agricultural fields in subtropical Texas.  Our research revealed the utility of such approaches.  For example, in a study of different "push" crops, we found that the presence of flowering non-crop plants such as buckwheat were associated with lower presence of aphids.  We also found that beneficial insects such as convergent lady beetle larvae were more abundant on brassica crop plants surrounded by flowering dill and Indian mustard.  These trends reveal the potential of these agroecological techniques to reduce pest pressures in vegetable crops in south Texas.

°Originally, we proposed a randomized block experimental design to test the effectiveness of push-pull technologies in managing pests of organic kale fields at Hilltop Gardens (Lyford, Texas) and Terra Preta Farm (Edinburg, Texas). We planned to incorporate, in tandem, plants that emit pest repellent, attractant, and natural enemy attractant properties in plots and measure the abundance and distribution of pest and natural enemy distribution and abundance in kale. The “pull” component comprised of a cocktail of fennel, dill, and alyssum, and sunnhemp (planted along field margins.) This cocktail constitutes a potential “dead-end” pull plant mix, wherein high pest immigration rates into pull plant stands are coupled with high mortality from beneficial insects, resulting in a net loss in pest numbers. Our “push” plants were selected due to their well-known repellant properties, particularly essential oils and volatiles, which have been shown to dissuade hemipteran, lepidopteran, and coleopteran pests in vegetable and non-vegetable crops (Parajulee et al., 1997). However, as mentioned below, there were complications with the establishment of the test species.

Originally, we planned three blocks of kale (Brassica oleracea Acephala group; Rogue cv.), to be established at Hilltop Gardens.  Using a participatory approach, we were limited to available space on the farm.  Push crops were selected in conjunction with farmer input.  Methodology was modified based on ongoing field operations where consecutive north-south rows of kale were planted on 40 inch beds and a pull row was placed between 20 beds of cash crops.  This was repeated three times, and a field of 20 beds of cilantro was then placed as a push crop.  Another three, repeating blocks of a pull crop/cash crop was then planted on the opposite side of the cilantro.

Push and pull sections were examine for insect presence using timed sweep netting.  Sampling was conducted at least 25 meters from the edge of the field.  Each pull row was swept with moderate vigor 20 times on both the east and south side (a total of 40 sweeps), using a heavy duty 15” steel net hoop (Forestry Suppliers, Jackson MS).  Insects collected in the sweep net were transferred to a plastic bag, and cold stored at 30° F until examination under microscope.

The identified insects were grouped as beneficials, pests of brassicas, and others. Data for the big eyed bugs were analyzed separately as there was big variation in their populations among the different treatments. All data were subjected to normality assumptions and when the data failed to pass the normality assumptions (for beneficial, pests, and big eyed bugs), were then subjected to Square-root transformation. However, for big eyed bug, this did not resolve the normality issue, and thus Generalized Linear Models (GLMs) were used to assess the influence of different influence of different plants on the abundance and diversity of insects. The means were separated by Fisher LSD and the treatments were considered statistically significant when p<0.05. All the data was analyzed using Minitab 17 Statistical Software (State College, PA).

Unfortunately, furrow irrigated fields in south Texas are fraught with weed seeds that come from irrigation water. Irrigation water in this region comes across miles of irrigation canals, inevitably picking up weed seed.  After the first furrow irrigation, the rows where the pull plants were planted were infested with common south Texas weeds, bush sunflower (Simsia calva), sunflower (Helianthus sp.).   Sunnhemp successfully established, but the other species did not.   Interestingly, the weeds came up in a patchy orientation, and thus we were able to estimate insect diversity associated with these species.  Where there was a patch of multiple weed species, we also sampled for insect diversity (under the category of "weeds" below). 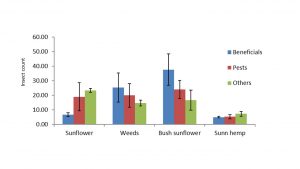 Figure 1. Average number (± SE) of beneficial, pests of brassica crops, and other insects*. 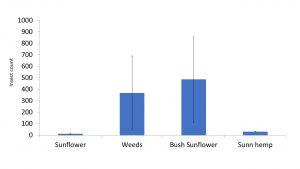 While the mixture of weedy plants and bush sunflower attracted a high number of bigeyed bugs, this number was not statistically significant. 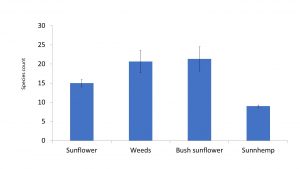 Figure 3. Average number of insect species in each treatment.

Average number of insect species in Bush sunflower and mixture of weeds was significantly higher than in the sunn hemp treatment.

Our findings suggest that there is a strong effect of weedy borders, especially with those that flower such as those included in this study.  Native species, such as Simsia calva and Helianthus sp., may have a strong impact on on-farm species diversity, even more than intentional pull plants such as sunnhemp.  However, these plants can also sometimes can harbor pest species.  Bush sunflower (Helianthus sp) was associated with significantly higher abundance of pest species and beneficial insects species (indicative of a density dependent relationship).  This data may indicate that native weed species--if properly managed--may also provide significant ecological services including biological control associated with biodiversity conservation.

Novel agronomic approaches, such as maintained weedy borders, can increase of the presence of natural enemies that can help minimize the impact of pest insects. We focused on intentional weedy strips in an organic brassica farms in south Texas in order to evaluate their potential role as a trap crop or as habitat for beneficial insects that could reduce the need or dependency on insecticides. A reduction in pesticide use has a number of implications for sustainable agriculture, most notably in the health of pesticide applicators and farmers exposed to this practice.  The promising results in this preliminary study (first of its kind in south Texas) warrant the need of further investigation.

We found that weedy patches in large part are a poor refuge for beneficial insects, but there are some promise in others such as  Sunnhemp and bush sunflower, which were associated with a relatively high abundance of generalist natural enemies.  This work suggest that strategically managed weedy borders have some potential as a viable option for pest management, especially in organic agroecosystems where the use of pesticides are limited.  However, this needs further exploration so as to best manage for maximum populations of beneficial insects (and minimizing pest populations).