One major advantage the Southern U.S. has over other crop production areas is a long growing season, making it possible to double-crop winter and summer crops. The most popular double-cropping system is winter wheat followed by soybean. Some growers are currently double-cropping cotton and peanut after wheat; however, the longer growing season requirements for cotton and peanut limit the yield potential for these cropping systems.

Recently, growers in the Southern U.S. are facing new production problems that are either reducing farm profits and sustainability or threatening soil conservation practices:

A double-cropping system developed at Clemson University allows interseeding or planting of one crop such as soybean, cotton, or peanut into a second crop, such as winter wheat, 2-3 weeks before harvest of the second crop. This system has the potential to overcome all of the production problems cited above.

The overarching goal of this demonstration project was to assist producers of cotton, soybean, peanut, and wheat with adoption of innovative conservation technologies and approaches for crop production to enhance soil properties, environmental quality, and farm profits, while reducing energy consumption and pest occurrence. Our supporting Objectives included:

We have made significant progress toward achieving project goals and objectives:

Equipment Modifications: We modified existing grower equipment. For planting small grain, we modified growers' conventional grain drills by blocking some of the seed tubes for planting wheat. For soybean farmers, every other tube was blocked on the grain drill. This provided skip rows (blank) in wheat for interseeding narrow-row soybean (15 inches) the following May. We also used the Clemson interseeder/planter (Figure 1-A) to plant wheat and interseed narrow row soybeans. For row crop farmers (38-in rows), one out of every five seed tubes of the grain drill were blocked to provided skip rows for interseeding cotton and peanut. In addition, to make this technology more adoptable by growers, a 4-row John Deere 1700 vacuum planter (configuration used by most row crop farmers) was modified for interseeding cotton, peanut, and wide-row soybean into standing wheat. The wide planting units on this planter were replaced with four units of JD narrow row planters. This system is designed to fit in narrow skips between wheat rows (Figure 1-B). Small beds generated during wheat planting provided an excellent non-compacted zone for the subsequent interseeding operation. 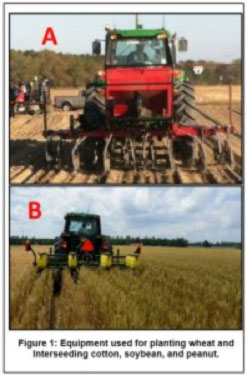 Demonstration Sites: We established 4 on-farm sites to demonstrate the advantages of the interseeding technology in cotton, peanut, and soybean productions. In anticipation of this project’s start date, skip-row wheat was planted (around mid-November in 2015 and 2016) in these sites using either modified grain drills or the Clemson interseeding drill/planter (Figure 2-A). The distance between skip rows were 15 inches for interseeding narrow-row soybean, 30 inches for interseeding 30-inch soybean (in one farm), and 38-inches for interseeded cotton and peanut. The drill was adjusted to maintain the same seeding rate (lbs./acre) as in conventional solid wheat.

Soybean, cotton, or peanut were interseeded into standing wheat (based on grower’s preference or rotation) around Mid-May in 2016 and 201 at all on-farm demonstration sites. Figure 2-B shows an interseeded soybean field before wheat harvest. The interseeded soybean’s plant height in demonstration sites, ranged from 6 to 12 inches at the time of wheat harvest. Also, interseeded cotton had between 2 to 4 true leaves at wheat harvest (Figure 2-C). In addition to interseeded crops, conventional seeded plots using standard practices for cotton, peanut (Figure 2-D), and soybean production were established for side-by-side comparison. The participating farmers were trained to use this technology. 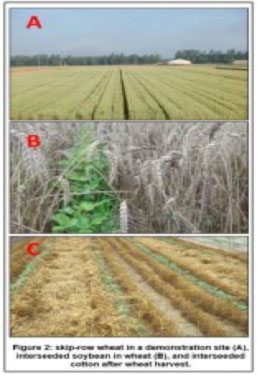 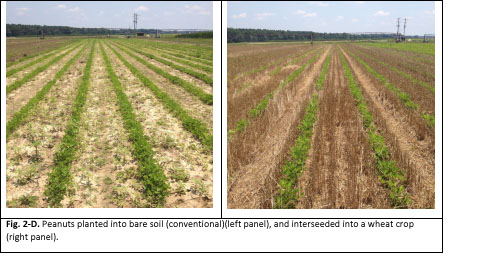 At the Edisto Research and Education Center (REC) demonstration site, we established insect, nematode, and weed treatments (with and without herbicide programs) in each crop to compare the effect of interseeding on pest incidence. Also, soil properties including chemical, physical, and biological were determined for different production systems.

Wheat was harvested around first week in June 2016 and 2017 using a grain combine equipped with a yield monitor. Row crops (soybean, cotton, and peanut) were harvested around mid-October in 2016 and 2017 from demonstration sites. We utilized a spindle picker, grain combine, and peanut harvester equipped with AgLeader yield monitors, which allowed us to map variations in crop yields across the production fields to document economic benefits of this technology.

Soil cores were collected from demonstration sites and were analyzed for soil chemicals and nematode population densities. Weed biomass was collected using a 0.45 m2 quadrat during and at the end of the season in both untreated and treated plots to quantify effect of residue on weed populations.

The results from the demonstration sites indicated that:

Wheat yields were not affected by row spacing or interseeding in all demonstration sites in both years. Although in 2016 wheat yields in interseeded plots were numerically higher than conventional plots (67 vs. 64, respectively), the differences were not statistically significant. 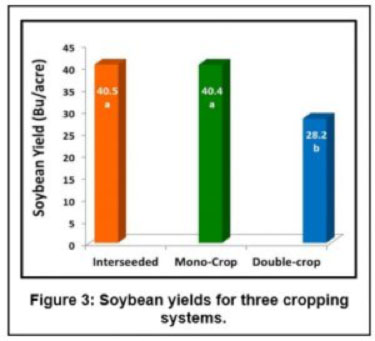 Crop residue associated with the wheat in the interseeding production systems significantly reduced weed infestation (including herbicide resistant weeds, such as Palmer Amaranth in both cotton, peanut, and soybean. Figure 4-A shows an example of reduction in weed densities due to cropping systems in 2016 and 2017 (combined across years and cropping systems). Weed infestation reduced crop yields. Reductions in soybean yield due to weed infestations, where herbicides were not applied, were significantly less at 26% in interseeded plots compared to 76% for conventional double-cropped soybean. Narrow row interseeded soybeans also suppressed other weeds such as grass and nutsedge. No herbicides were applied in demonstration sites to the narrow-row interseeded soybeans, while the conventional double cropped soybeans received at least two applications of herbicides. This was a savings of about $36 savings per acre. 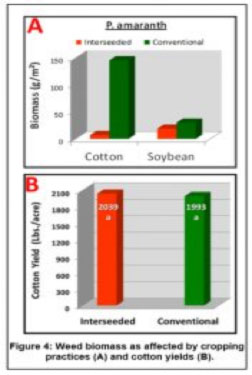 Since narrow-row interseeded-soybean increased yields numerically (10%) compared to 38-inch mono-crop, full season soybeans, and since it significantly suppressed the weed infestation; therefore, we are recommending only narrow-row interseeding scheme for farm production.

Above-ground dry biomass was measured on 9/28/16 and on 9/21/17 and results are shown in Fig. 15 and 16. Crop yields are shown in Figs. 17 and 18. For the conventional plots, there was no significant difference in above-ground biomass production in 2016. But, significant differences in biomass were detected for the interseeded plots, with the dryland and Decagon EC-5 treatments producing higher biomass compared to the other treatments. In 2016, the yield data for the interseeded plots followed the opposite trend to the above-ground biomass. Treatment producing less above-ground biomass produced more peanuts yield.   The yield for the interseeded plots tended to increase slightly with seasonal irrigation applied. However, no obvious trend was observed in the yields for the Conventional plots, with the ETgage resulting in significantly higher yield compared to the other treatments. In 2017, there was no significant difference in yield among treatments. 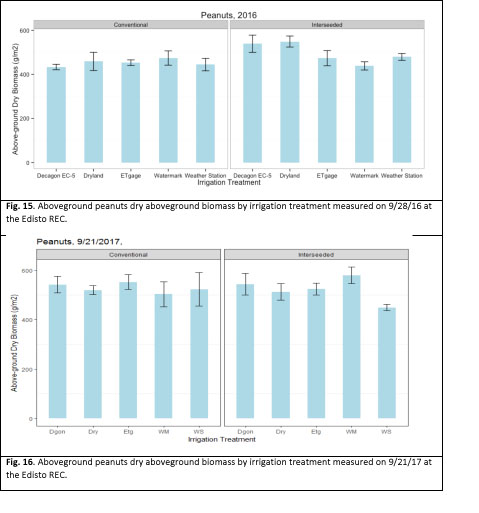 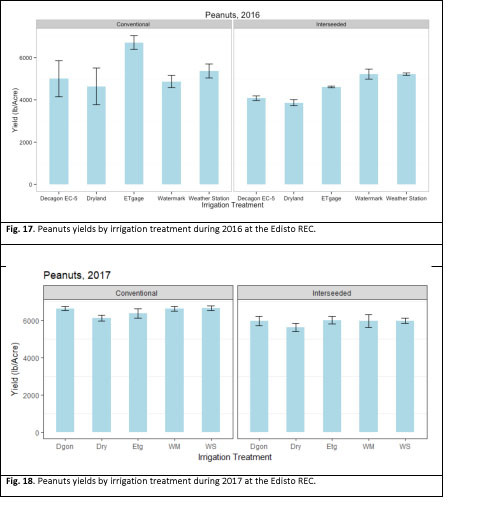 Training field days and workshops were offered to farmers, county extension agents, agricultural-related businesses, and policy makers at geographically diverse locations in South Carolina. Also, results were presented at the scientific and local meeting. The benefits of interseeding technology were demonstrated or presented during the following workshops, field days, scientific and local meetings:

4 Farmers reported changes in knowledge, attitudes, skills and/or awareness as a result of their participation
Key changes:

This project has developed information, methodologies, and technologies that will provide growers and consultants with effective and affordable tools to adopt innovative conservation technologies for crop production to enhance soil properties, environmental quality, and farm profits, while reducing energy consumption and pest occurrence.