Tomato is the most widely grown vegetable in high tunnels. However, salinity can rapidly become an issue in addition to soil borne diseases and nematodes. There are few options available for managing nematodes or high soil salinity in high tunnels. An attractive alternative is the utilization of soilless culture. Media can often be one of the major production costs in addition to having a limited useful life in a soilless culture production system. Perlite and peat are most widely used, but are not locally sources, not renewable and a costly. Locally sourced, renewable substrate components such as eastern red cedar will increase the sustainability of soilless culture of tomatoes by reducing dependence on nonrenewable substrates.

Evaluate eastern red cedar as an alternative soilless substrate for production in greenhouses.

Two farmer cooperators were involved in this research. Cooperator no. 1 was a relatively new greenhouse grower, having one year of prior experience with hydroponic tomato production. His first year of hydroponic production was less than satisfactory, mainly due to a high percentage of unmarketable fruit caused by blossom end rot. ‘Red Deuce’ was the lone variety used for the test of cedar waste as a growing medium. The crop was transplanted in late January, 2017. This cooperator intended to market his tomatoes through a local produce auction, during spring and early summer, avoiding competition from local, field produced tomatoes.

Cooperator no. 2 had extensive experience with tomato production and direct marketing, based on more than 20 years of field and tunnel production.  His market is entirely direct and local. His greenhouse had been mainly used for spring production of transplants. It was his desire to evaluate hydroponic production of tomatoes for late summer and early fall production and marketing. In addition to ‘Red Deuce’  this cooperator grew ‘BHN 589’ and ‘BHN 871’. All varieties were determinate.  Transplanting took place on July 20, 2017.

Tomatoes were grown in a hydroponic system using either perlite or cedar wood waste as growing media. The cedar was locally sourced and in one case was dry cedar shavings, mainly intended as horse bedding (Cooperator no. 1), and in the other case, was cedar landscape mulch (Cooperator no. 2 – Figure 1). Three gallon grow bags were filled with cedar or perlite and then thoroughly wetted prior to transplanting. 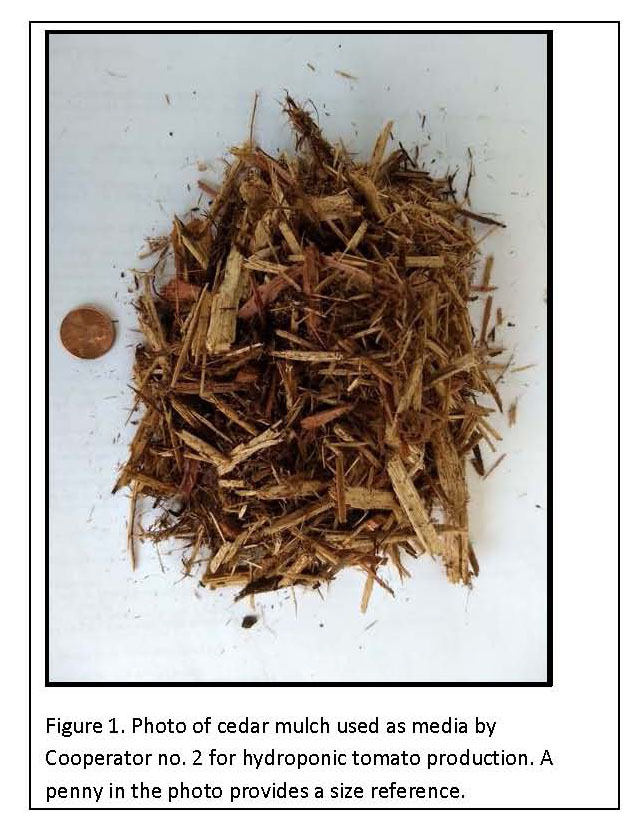 For delivery of irrigation solution, drip stakes were connected to emitters installed in 5/8-inch orchard tubing. Two drip stakes were utilized for each grow bag. Irrigation was controlled by an irrigation timer (Galcon 8000S or similar). This type of controller allows the operator to set an irrigation window, and a frequency of irrigation in that window. For example, in June the irrigation window may open at 7 AM and close at 9 PM. During the open time, plants will be frequently irrigated, usually at 15 minute intervals, for 3 – 7 minutes for each irrigation event.  Actual duration of irrigation is managed based on the amount of leachate (irrigation water passing through a grow bag containing a tomato plant). Total amount of irrigation water applied is measured by direct collection of the output of two emitters  and the quantity of leachate is determined by collection of it in disposable aluminum pan placed beneath a raised platform on which a grow bag and tomato plant are positioned. The aim is to manage the irrigation system in such a way that leachate volume is ~20% of the total volume of water applied.  During extremely warm weather, the cooperators were advised to also visually assess the leachate during the hottest part of the day to ensure that at least some leachate was present during the time of high water demand.

The fertilizer used was commercially available hydroponic fertilizer such as Peter’s Professional 5-11-26 and CaNO3 (greenhouse grade).  Procedures generally followed those recommended on the hydroponic fertilizer label. Irrigation water quality was monitored especially for Ca concentration and for pH. Plants were continuously fed with fertilizer solution using two 1:100 Chemilyzer injectors, one for the 5-11-26 and one for the CaNO3.  pH was adjusted by addition of appropriate amounts of H2SO4 to the 5-11-26 concentrate solution. Concentration of fertilizers applied relied on assessment of stage of growth, plant appearance and on results of weekly foliar analysis. Fertilization scheme generally followed that outlined in the MSU Greenhouse Tomato Handbook (Snyder, 1992).

The experimental design for each experiment was a randomized complete block. For the spring planted experiment there were two treatments, perlite and cedar, and four blocks. For the summer planted tomatoes there were two media treatments, three cultivars and two blocks. Data were analyzed using the SAS Anova procedure. Means were separated by single degree of freedom F-tests.

Harvest for the spring planted tomatoes began May 4, 2017 and harvest of the media experiment continued until June 15. Cooperator no. 1 continued harvest of the spring-planted tomatoes from approximately one more month, harvesting more than 30 lbs. per plant. For the summer-planted tomatoes, harvest began on October 6 and ended on October 19, and the cooperator continued his harvest for approximately three additional weeks. Fruit were harvested at breaker stage or later, graded as cull or into U.S. size grades of small, medium, large and extra-large. Tomatoes in each category were counted and weighed. Defects on cull fruit were noted. Data were summed over all harvests prior to statistical analysis.

For the tomatoes planted in late winter, production was nearly identical between two media, cedar shavings and perlite (Table 1). Production problems unrelated to media treatments were encountered, mainly the disease botrytis and arthropod infestations of whiteflies, russet mites and thrips. All these production problems were handled with conventional pesticide applications. When the cooperator halted harvest in mid-July he had harvested more than 30 lbs per plant.  Root mass was evaluated at the end of the season. Roots in the perlite were finer and likely somewhat more abundant than those in cedar (Figure 2). 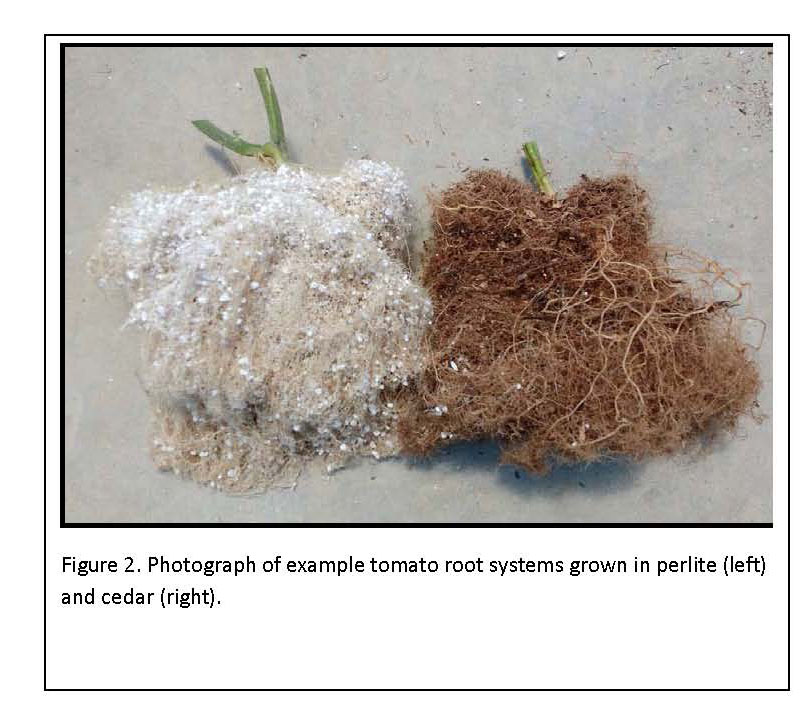 For tomatoes grown in late summer and early fall, Cooperator no. 2 had some difficulty managing the irrigation to avoid stressing plants. Leachate volume was frequently less than 20%. Temperatures often exceeded 100 F in the greenhouse, and during these times water usage was high. Most of the cull fruit was caused by the presence of blossom end rot. ‘BHN 871’, seemed particularly susceptible to blossom end rot especially when grown in perlite.

Data analysis indicated that the three varieties evaluated by Cooperator no. 2 performed similarly to each other. Consequently, average performance of all varieties is provided in Table 2. Similar to results achieved by Cooperator no. 1, there were few differences in performance of the two media for percentage of marketable fruit, total yield, and yield of each size class (Table 2). However, average fruit size for tomatoes grown in perlite was less than that for those grown in cedar.

In these two small experiments the performance of tomatoes grown in cedar or perlite in a hydroponic system was similar. We initially hypothesized that cedar might prove to be detrimental as a medium in hydroponic systems, due to the presence of antifungal and anti-arthropod compounds present in cedar wood. Apparently the presence of these compounds is not detrimental to tomato production when present in the media. However, a grower should keep in mind that these experiments were small, involving a very few number of plants, and were of relatively short duration. More extensive testing could reveal detrimental effects of using cedar as a hydroponic media. Considering that eastern red cedar is viewed as a weedy tree of minimal value, cedar mulch, saw dust, etc. should be considered for additional testing as a hydroponic medium. These products could be considered a significant potential contribution to the sustainability of hydroponic greenhouse tomato production.

5 Farmers reported changes in knowledge, attitudes, skills and/or awareness as a result of their participation
Key changes: