Arbuscular mycorrhizal fungi (AMF) have been proven to provide a wide range of benefits to plants including improved nutrient absorption, resistance to disease, pests, and drought (Smith and Read 2008), while inoculation with AMF has been widely reported to enhance plant growth and yield in both green house and field studies (Wu et al 2005; Adesemoye et al 2008; Baslam 2011).

There has been a pulse of commercial mycorrhizal products now available for farmers with products like microbial inoculants containing naturally occurring beneficial soil microorganisms, now a trend in sustainable agriculture. Nonetheless, the research on these products is relatively sparse, with existing research not necessarily applicable to warmer subtropical climes of the southern US. For example, the ability of the non-native commercial fungi spores to colonize the plants and provide expected outcome is still questionable, especially in warm climates where there is a relatively higher diversity of soil fungi. Introduced fungi do not appear to offer much superior advantage to native species since they need to compete with the indigenous population of mycorrhizal fungi in the farm. There are some studies where crops fail to respond to the introduced mycorrhizal fungi. There are two principal ways of increasing mycorrhizal activity on farm: (1) inoculating with selected commercial mycorrhizal fungi and/or (2) promoting the activity of effective indigenous mycorrhizal fungi through cultural practices. Commercially available inoculum comes at a cost to farmers, a cost that presents a considerable obstacle without evidence of improved yield in subtropical farms. This study examined different ways to promote and culture native fungi on-farm using sudangrass (Sorghum × drummondii), which when grown as a cover crop positively influenced a diversity of on-farm mycorrhizal fungi.

We conducted a greenhouse as well as field experiment to: (1) explore the native AMF community in the Lower Rio Grande Valley; (2) analyze the potential of on-farm AMF production; and (3) analyze the benefits of inoculating organic vegetable systems with AMF. Our preliminary results indicate that there was a very low population as well as diversity of AMF in vegetable farms of LRGV. Sudangrass increased the population of AMF spores in the field when used as a cover crop as well when used to produce AMF inoculum in bags. When treated with the commercial and on-farm produced AMF inoculum, there was a difference in the colonization by AMF in roots of peppers and onions but there was no significant difference in the total yield. However, it should be noted that AMF treated peppers flowered and produced fruit earlier than the control.

Objectives of this project are:

In May 2017, after the vegetable growing season in the LRGV, soil samples were collected from multiple organic and conventional farms to analyze the native mycorrhizal fungi. Mycorrhizal fungi spores were extracted following the decantation technique and viewed under the microscope to determine the mycorrhizal fungi spore density per gram of soil. Spore diversity was analyzed morphologically following INVAM website (http://invam.caf.wvu.edu).

During the summer of 2017 on-farm inoculum was prepared in the organic garden at UTRGV by growing sudangrass in 7 gallon grow bags containing 4 parts organic vermiculite (Vigoro, Chandler, AZ), 1 part of farm soil with mycorrhizal fungi spores and 1 part of compost for 8 weeks, following the method by Douds et al. (2014). Soil bags were irrigated and weeded as necessary. After 12 weeks the plants were terminated (using a lopper), and all biomass was macerated and mixed into the grow bags. After 5 weeks when the plants are fully decomposed, soil samples were analyzed to document the spore density/gram of soil and the diversity of mycorrhizal fungi.

At the same time, we planted multiple cover crops in a two acre plot at Terra Preta Farms to compare the efficiency of the cultural method to promote on field mycorrhizal fungi using cover crops and using the on farm produced inoculant. The cover crops were terminated after 8 weeks and soil samples were collected 4 weeks after the termination date (following same schedule as bagged samples) to analyze changes in mycorrhizal status in the soil. Organic peppers and onion were grown in the field as well as in pots in a greenhouse and total yield and AMF colonization in roots was analyzed.

Our results show that there was a poor diversity of mycorrhizal fungi spores in the vegetable farms of south Texas. However, the density of spores was farm specific. 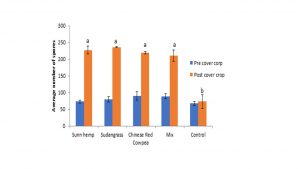 Figure 1. Average number of mycorrhizal fungi spores in the soil before and after cover crop treatment.

Our results show that cover crops had a significant impact on the density of mycorrhizal fungi spores compared to the control, weedy fallow. For cash crop production, there was no significant difference in the yield of cash crops in both the green house. However, peppers treated with both on-farm inoculum and commercial inoculum producing flowers and fruits earlier than the control. Plants treated with on-farm inoculum and the ones growing on cover crop plots had significantly higher degree of AMF colonization in the roots compared to the commercial inoculum treated and control plants.

The preliminary results of this project were/will be presented in the following meetings: