Nematodes are a growing issue in agriculture. Nematodes can cause major damage in several crops. Soybeans are one of the hardest hit crops with nematode pressure. Side effects of nematode in soybeans can result in yield reduction up to 50 percent and total plant loss depending on soil type. Without proper training and guidance, farmers can lose the ability to farm land that is hard hit by nematode. Most non-host crops such as peanuts or sorghum are not profitable for farmers in this area or equipment/transportation may be limited. We need sustainable practices such as cover crop rotation to help minimize the impact of nematode on our cash crops.

We are looking to cover crop rotation to help reduce the nematode number in the soil. Cover crops are a great use to maintain soil health, reduce erosion, and help with water infiltration. We are looking to use mustard greens as a cover crop that can be mowed down and tilled into the soil. Research that other universities have done have shown that mustard greens that are chopped and tilled create a natural nematode fumigant. To keep soybean production sustainable in a nematode infested field we will hopefully achieve better control with cover crop rotation that will allow the soybean to reach maturity. Once we have a better understanding of the data for cover crop options we hope to add more cover crop varieties into the mix offering farmers a variety of solutions across different land types. We believe that in order for a farmer to be prepared he must have all options at his disposal and have the research there to support those options. This research will be a critical tool to help farmers combat the growing concern that is the nematode pest in the South.

Objective Two- Cost of the field prep vs the cost of cover crop use.

Objective Three- Look at how much varieties impact nematode activity.

Objective Four- Use cover crops in rotation with a cash crop to increase yield while reducing the nematode population. This will be a Cover Crop Vs NO Cover Crop in a heavily nematode infested soil type.

We are now trying to prove the concept so further research can be done at a later time.

Fall 2019- Conditions were too wet to establish Cover Crop 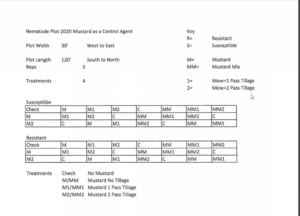 80-100 HP Tractor with a 8' seed drill with a small seed box. Planted at recommended rating per University of Arkansas Systems Division of Agriculture Recommendations. 10 pounds to the acre.

Abandoned the Cover Crop Demo due to lack of growth.

3 no longer being produced due to company consolidation

Seed germinated first week of April and was allowed to grow through May 15th. Mustard did not grow to the needed size. Average plant size was 2-3 leaf with a leaf size of 1-4". The principle of biofumigant works on the fact that you have adequate biomass the current mustard varieties selected can get as round as 12-24" and 18"-30" tall.

After three years of planting mishaps we have concluded that the window for planting mustard is typically going to be from October 1-31. Mustards need soil temperatures around 45° F to germinate. The mustards could be planted later and allowed to sit over the winter in the soil, but growth window needed to achieve biomass pushes you into the cash crop window.

Mustards were very cold hardy once up and established, though there was damage during hard freezes. Most of the mustard that was planted elsewhere in the county showed signs of growth again in the spring. Yields were not available for the Mustard Fumigation area.

^Percentage based open number of galls covering the root system

Yields were not taken due to weather concerns during harvest. A yield map is included that gives an estimate of yield. All trials were 1000’ Long by 85’ Wide.

Field Conditions did not permit an attempt to establish a final planting of cover crop. 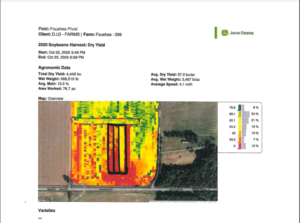 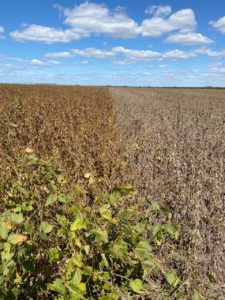 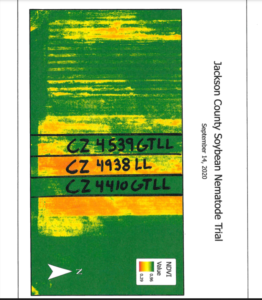 Due to not being able to establish the field trials in 2019/20/21 due to weather delays we focused more on the process of planting and the issues that occurred.

We did a lot of one on one consultation in 2020/21 in regards to the feasibility of planting just mustard as a viable cover crop and the need for a great amount of biomass. These consultations consisted of a site visit, followed by equipment check, and discussion of the current program. We discussed overall options that could be used and how the concept could be applied. Without firm data I did not make a recommendation to plant mustards as a biofumigant, rather to see if the cost to setup to do so was cost effective for the grower. In most cases the cost was higher than the perceived benefit.

I have some data that may be used in a fact sheet in regards to cost of setup. I am unsure of publishing due to the lack of an actual result from the field trial. There could be other options available, but currently the cost seems too high for a large farm setup.

During a Discovery Farm Virtual Field Tour hosted by the University of Arkansas Systems Division of Agriculture, I discussed the other options that cover crops add to wildlife habitat. I discussed briefly my work with mustards and how they could serve many purposes potentially.

30 Farmers reported changes in knowledge, attitudes, skills and/or awareness as a result of their participation

This project did not go as planned due to forces of nature, physical limitations, equipment limitations, cost, etc. We did gain a valuable baseline to go by in terms of determining if "Mustard Cover Crop as a Biofumigant" is good for a farmer's operation.

Planting cover crop mustard for fumigation does not make your overall farming operation in terms of input cost decrease. Other fumigant chemical-based product could potentially be used that delay nematode that would be at a similar cost per acre. We do not have a good cost comparison due to the limited amount of available data. Fumigation with mustards adds additional equipment passes which increases input costs. Specialized equipment is needed such as a flail mower and small seed boxes either on your drill or a drill just for cover crops. Once you purchase the additional equipment it quickly becomes apparent more available means of nematode control are better options.

Since many are in a no-yill System this program does not work. The underlying idea of mustard as a biofumigant comes down to the ability to mow, then incorporate the mustard into the soil profile. Increased tillage and a reduction of ground cover will lead to higher runoff.

For those not in a no-till system the idea would work, but the increased equipment passes would increase emissions and soil compaction. Deeper tillage would be needed so newer conventional vertical tillage methods would not work.

The underlying issues of nematodes is one not readily seen by the public. Farmer's could use the mustard as a free food source for both animals and people. The potential social benefits to Farmers are very limited without proper education to the public on the issues Nematodes cause in production agriculture.

This project should be looked at again, but for small scale farmers less than 100 acres total. The needed equipment and time quickly outweigh the benefits. The concept has been proven in small scale vegetable operations. With most growers adding acres and going to larger field equipment the ability to seed single small seed plants like mustard is quickly reduced. We tried some blended grasses and mustards, but it seemed as though the grass suppressed the mustard's ability to grow. If you could run a blended cover crop seed there would be potential for larger field operations. Overall after working through this project I am not sure the goal justifies the process to get there. The increased tillage, equipment passes/cost, etc., quickly diminish the sustainability factor.