There has been high demand for local food in western North Carolina. The purchase of local foods supports local farmers and local economies, provides improved health benefits, and has a positive environmental impact. However, the limited availability of locally grown food along with consistency and access hinders these benefits. There are several reasons for limited availability of locally grown food with consistency in this region. The rough mountainous terrain and frigid winter weather limit agricultural opportunities such as the size of farms, shorter growing season, and limited large-scale mechanized farming operations. In addition, dramatic weather change in mountain region increases risks in agriculture such as spring frost damage.  These result in Appalachian rural farmers’ low income and high rates of off-farm workers. Some Appalachia farmers dedicate a portion of their limited acreage to greenhouse production to maintain their profitability. Greenhouse production can extend growing season and prevent damages from dramatic weather change, but the requisite heating and energy costs exclude many producers from being able to afford a heated greenhouse. The main purpose of this study is to extend the growing season and to cope with dramatic weather change with biomass heated greenhouse as a solution for several challenges facing successful profitable farming in the mountains. Biomass energy, generated from all available feedstock from farm such as livestock manure, agricultural waste, wood waste and food waste, can be an affordable greenhouse-heating energy source for those seeking lower energy costs to extend growing season. Our research team built two pilot greenhouse heating systems at local farms. We have begun collaboration with two cooperative farms in Watauga County, NC: Springhouse Farm and Against the Grain Farm. Working with these farmers, our team has developed a preliminary design of pilot systems and greenhouse heat flow model. The pilot systems include biochar kiln, solar collector, food dehydrator, and heat storage tank. In addition, we have built a root zone heating (under bench heating) system at two farms. The initial results (2018 and 2019 winters) show significant energy savings that can promote the resource-limited farmers’ interest.

With the support from SARE’s on-farm research grant, we were able to demonstrate performance of our pilot system and root zone heating (RZH) system on the cooperative farms. We envision farmers in Appalachia can increase their profit with our biomass heating system by growing season extension with less energy cost and by increased crop yield with soil amendment.

Materials and methods at Springhouse Farm:  Springhouse Farm has a conventional 20ft by 30ft high tunnel greenhouse. There are four growing benches and one germination bench inside. The greenhouse is used primarily for propagation with work beginning late January to mid-February. The inside temperature was maintained at 55°F with a propane forced-air unit heater. Electric heat mats were used for early germination.

In late 2017, we completed installing the Nexus pilot system that applies renewable energy to heat a greenhouse for the growing season extension (Figure1). This pilot system consists of three main components: collection, storage, and distribution. Heat transfer fluid, 50/50 propylene glycol/water-based solution flows through the system to collect heat and deliver it to the plant rooting zone inside the greenhouse.  The collection component includes a 30 evacuated-tube-solar thermal collector and a biochar kiln with a built-in heat-exchanger. A differential controller controls circulation pumps to collect heat from renewable sources (e.g., sun or biomass) and delivers the heat to the heat storage, a 40-gallon propane water heater located inside the greenhouse.

The stored heat is distributed to crops through root zone heating (RZH) system (Figure 2). RZH circulation pump is controlled by the thermostat that senses germination soil temperature. The delivered heat is radiated to the soil on the benches through EPDM tubing (0.125” ID) installed on top of the benches. A mixing valve mixes hot fluid from the storage (water heater) and cold fluid from the RZH return pipe, and discharges the mixed fluid to the supply pipe. During the warm season when heating is not needed in the greenhouse, the collected heat bypasses the water heater and is instead dumped into the food dehydrator where the heat can be used to dry food.

The root zone heating system was used from February 15 through June 12 in 2018. Each bench was covered with 6mil polyethylene film at night until the end of March. A Unit heater (propane forced air heater) was turned on March 8 set at 40°F and then turned up to 48°F on March 12. It was usually set at 55°F until the previous year.

In 2019, we upgraded the bench covers to reduce heat loss. We built zippered growing bench covers using 6mil polyethylene for easy opening and closing, and they are placed over gable frames made of PVC pipes (Figure 3). The germination bench cover was constructed using wood frames and four 2ft by 4ft twin-wall polycarbonate panels (8mm) that has twice the R-value of 6 mil polyethylene (Figure 3).  We also upgraded a mixing valve for the root zone heating from manual to automatic. The fluid temperature in the water tank varies depending on solar radiation. In order to supply the fluid with constant temperature, we installed a microprocessor-based mixing valve that provides a setpoint temperature, set to 90°F.

Materials and methods at Against the Grain (ATG) Farm:  ATG Farm has a 30 ft by 16 ft passive greenhouse built in 2016. The pilot system we installed at ATG includes a biochar kiln, solar thermal collectors, a food dehydrator, a water storage (i.e., thermal battery), and vertical germination racks with root zone heating system. The heat collected from the biochar kiln and solar collectors is stored in the thermal battery. The heated water is radiated to the passive greenhouse and to the germination pots sitting on vertical racks over the thermal battery at night. The root zone heating system at ATG has four racks over the thermal battery and there is ¼” EPDM tubing installed under each rack. Each rack has 10 loops of tubing and a ball valve installed to isolate the rack if not used (Figure 5). 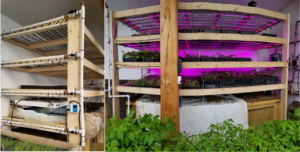 Results and discussion at Springhouse Farm:  The greenhouse at Springhouse Farm was heated only by a propane unit heater until the pilot system started to be used in 2018. The unit heater was set to maintain inside air temperature at 55°F. When the pilot system and RZH system were installed and started operation in 2018, the unit heater was used as a supplemental heating source.  In 2019, the unit heater was turned off and the greenhouse was heated only by the pilot system. Table 1 includes heating degree days (HDDs) and a number of days below freezing as indicators of cold and annual variation as well as propane usage in each year. The HDD of a day was obtained by subtracting an average temperature of the day from the base temperature (55°F), and all the HDDs from the day the greenhouse heating started to the end of May were summed to estimate the seasonal heating requirements. In order to normalize the propane consumption according to the HDDs during the greenhouse heating period of the year, the propane consumption was divided by the HDDs. Table 1 shows that our system, along with our microclimate control strategy, has reduced propane consumption for greenhouse heating by more than half while maintaining productive growing conditions.

Figure 4 shows the daily temperature distributions of RZH supply fluid and the resulting germination soil in March during the first-year operation (2018) and the second-year operation (2019). The temperature of the heat transfer fluid supplied to the RZH system maintained a range between 80°F to 90°F except the spikes at the very beginning of system operation. These spikes were caused by the high fluid temperature in the water heater which solar energy had raised during the day. Although the mixing valve mixes the hot fluid with cold fluid from the return side, there is a limit to its accuracy. In addition, when the system was idle, the temperature of the supply pipe dropped below 80°F.

In 2018, the germination soil temperature dropped below 70°F when the unit heater was not used while the germination soil temperature was maintained mostly above 70°F even without space heating in 2019. This proves that the upgraded germination bench cover reduces heat loss thus improves the system’s temperature control performance. The outlier line in 2019 chart was the result of when the cover was not closed at night, showing a significant effect of the cover on reducing heat loss. Figure 6 also shows that daytime soil temperature was greatly controlled by ventilation fan. The ventilation fan was set at 90°F in 2018 and 75°F in 2019.

Figure 4. Daily temperature distribution of RZH supply and the resulting germination soil in March in 2018 vs 2019.

Results and discussion at ATG Farm:  During kiln operation, the heat transfer fluid (50% propylene glycol, 50% water) is pumped at a rate of 3 gallons per minute through the heat exchanger (13-18.3mm copper tubing) in the top room (heat exchange room) to capture heat from the flue gas and is returned to a storage tank inside the greenhouse. The storage tank has a capacity of 1,136 liters (300 US gallons) and an internal heat exchanger (13mm-30.5mm copper tubing) to make a pressurized closed-loop piping system. The pump is controlled by a differential controller with temperature sensors on heat exchanger outlet at the kiln and inside the thermal battery. The pump will circulate if a temperature difference of 6.5°C or greater exists between the heat exchanger and tank.

Table 2. Thermal data of thermal battery during the kiln operation.

We held a workshop on April 29th, 2018 in association with Blue Ridge Women in Agriculture (BRWIA).  BRWIA is a group in the High Country dedicated to improving local farming and building a vibrant local food system. The workshop we hosted by Springhouse and Against the Grain farms, two of our partner farms, focusing on root-zone greenhouse heating, biochar production, and solar and biomass process energy for heating and crop dehydrating (Figures 6 – 8). 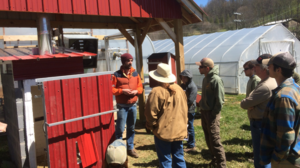 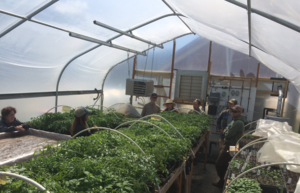 Figure 7. Inside the root-zone heated greenhouse at Springhouse Farm. 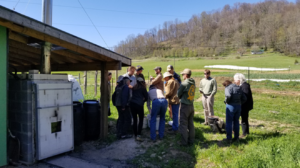 3 Farmers changed or adopted a practice
1 Grant received that built upon this project
Project outcomes:

We envision the transition from fossil-fuel based agriculture to a local sustainable food system by addressing the systematic problem of local food availability in Appalachia. Local food availability depends on two factors, market development and increased productivity to meet the resultant increased demand. Our research proposes to help increase production by developing low-cost greenhouse operation with renewable heating systems.

According to this case study from two partner farms (Ms. Amy Fiedler, owner of Springhouse Farm, and Ms. Holly Whitesides and Mr. Andy Bryant, owners of Against the Grain Farm), separating renewable energy storage and a backup heat source can improve renewable energy collection and efficient heat distribution of the entire system. Improvement can be demonstrated in the future by installing an on-demand water heater in addition to the ATG Farm's current pilot system, which has no backup heat source.