Eastern gamagrass is a valuable productive native grass that originally ranged over large areas of the eastern and southern United States. It is highly palatable and produces high quality forage and high yields on marginal land subject to excess moisture. Due to overgrazing this grass has become significantly less abundant and thus becoming a study of interest.

In 2019, we observed and took measurements of five ecotypes from different locations in Texas and Oklahoma and that were growing in Temple, TX. We input our recorded measurements of each ecotype for crop parameters in the ALMANAC model. We simulated yield for each ecotype using data on rainfall, temperature and soil type of each county of interest. The parametrized model will be useful for determining which ecotype has optimum productivity for these different environments.

Seventy-one ecotypes were collected from different locations in Texas and Oklahoma and planted in a common garden at Temple, TX. The genetic diversity within this collection will be characterized using EST-SSRs, and the ploidy level of each ecotype is being determined using flow cytometry. Measurements are made for plant parameters for the ALMANAC model. Nitrogen response data is collected from four sites to follow up on previous studies by NRCS.

Measurements will be taken in 2019 on agricultural experiment station plots and on four farmers’ fields with different treatments including applied fertilizer and harvest interval.  The field experiment was not repeated in 2020 because of COVID restrictions, but will be repeated in 2021.  The experiment was laid out as a split block randomized complete block design with three replications. Results of this project will lead to optimized management of these accessions, esp. applied fertilizer, to minimize cost, maximize profit return, and avoid negative environmental impacts (esp. soil and water qualities), and maximize forage quality. Information derived from these sites was used to develop process-based modeling of crop growth. This model is an effective way of representing how EG accession, environment, and cropping management interactions affect forage production. This will increase the accuracy of crop productivity estimates and improve planning adaptation strategies to reduce risks and uncertainties about economic returns generated from planting EG. The developed forage model system will be used for decision-making, farm planning and educating farmers or ranchers about potential benefits of EG establishment. Education effort for farmers or ranchers will be carried out using field demonstrations and through news publications directed towards agricultural producers. Farmers will be offered a chance to visit the research plot areas, with an annual field day and talks by the researchers to discuss the economic and environmental benefits and remaining challenge of an EG production system

Our objective was to enumerate eastern gamagrass benefits and provide better guidance for establishment and fertilizer application of this grass for maintaining productive, resistant, and resilient forage and hay production.

J. Frank Monk and Gordon Goeschel of Beeville, TX has large acreages of eastern gamagrass that they manage for hay.

They allowed us to impose our fertilizer treatments on small plots in their pastures and take plant and soil measurements there.

Once the project is finished, this will offer them improved information for optimum fertilizer applications for their haying operations.

Similar situation for Ronnie Skala of Oscar, TX.  However his farm is strictly a grazing cattle farm.  We also imposed fertilizer treatments in small plots on his eastern gamagrass and took soil and plant measurements.

The four sites where different nitrogen rates were applied once in the spring consisted of a Texas Sue variety planted north of Temple TX (Jim’s), the same variety planted west of Temple (Ronnie’s), and two sites in bottomland south of Beeville, TX with a variety that has been there for several decades (Frank’s and Gordon’s).

There was a zero rate control, a 75 kg N per ha rate, and a 150 rate. Results with percent N in the forage samples showed some small differences in the early harvest which quickly disappeared in subsequent samplings (Figure 1). 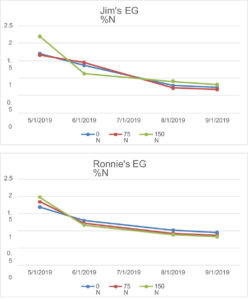 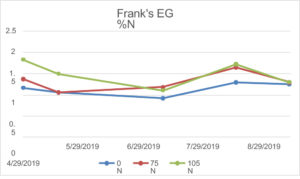 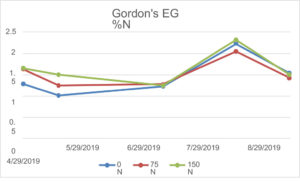 Likewise, the dry weight of the forage from the sequential samples showed a jump in response to the high N application on the first date, but this did not consistently cause greater forage dry weights in the four sites (Figure 2.) 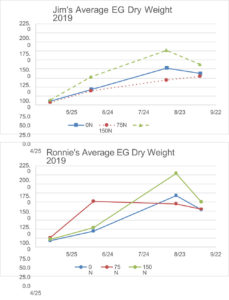 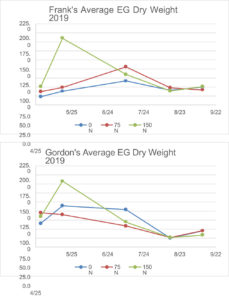 We showed an initial increase in forage production in the first one or two harvests after fertilizer applications relative to the controls with no fertilizer.  These differences disappeared by the end of the growing season.

Thus our conclusion was that the high rate of N application done once early in the season was likely not worth the cost in the long run. More likely, and what we planned for 2020 but was not possible due to COVID, was that N applications split and applied at different times throughout the season will likely be much more effective. This is especially true for fields harvested repeated for hay at about 5 week intervals. We intend to test this in 2021

In the future, we plan to split the nitrogen applications, more like the accepted practice for haying operations, so each time the hay is cut (at about 5 week intervals), we will add a portion of the annual total amount of fertilizer.

8 Consultations
2 Webinars / talks / presentations
2 Other educational activities: Worked with a Hispanic graduate student from Univ. of TX Arlington who took on the project of mesurements of the grass plots in the summer of 2019 and set up and ran the simulation model. She presented a poster on the research at the American Soc. of Agron. meetings in 2019

Worked with the farmers, keeping them updated on research results and provided them with the final results of the 2019 field study.  This will help them optimize their fertilizer applications in the future.

Farmers are learning how to better manage this important grass through improved fertilizer management.