Legume cover crops have potential to offset N fertilizer inputs, provide a high-value supplemental forage source for the regional livestock industry, and improve the health of agricultural soils in the Southern Rolling Plains and Permian Basin of western Texas. The fallow period between harvesting wheat and planting cotton often exceeds eight months (July–February), and the fallow period in continuous wheat systems is generally July–October. Annual precipitation in this region has a bimodal distribution, with the majority of rainfall occurring in the late spring (April, May, June) and early fall (August, September, October). The fallow periods in wheat–cotton and wheat–wheat systems are a valuable opportunity to take advantage of fall precipitation and grow a cover- or dual-use-crop.

The efforts of this project expanded upon the work of SARE project OS19-131 to investigate management options for legume cover crops in continuous winter forage, wheat (or grain sorghum)-cotton, and continuous cotton systems. Successful cover crop management can contribute surface residue, soil organic matter, and organic N, reducing fertilizer input costs. In addition to potential agronomic benefits and soil health, many cultivated legumes are high-protein forage crops that may offer dual-use potential in integrated animal systems. Texas is the leading state in goat, sheep, and cattle production for the U.S. All three of these livestock species are major regional enterprises in western Texas. Many cotton and wheat farmers also manage livestock on native rangeland or improved pasture, and wheat is often managed in a dual-use system to provide winter grazing, as well as a grain crop. The proposed cover crop practices could provide a high-quality forage source to supplement livestock production during critical periods, although optimum species and seeding rates are unknown.

The objectives of this research are to:

Warm-season legume trials were initiated following grain sorghum harvest at two sites in Tom Green and Runnels Counties in 2020, and at three sites in Tom Green, Concho, and Coleman Counties following grazed-out winter forage or failed winter small grains in spring 2021. Trials consisted of a 3 × 3 × 2 factorial set of treatments including three legumes: 'ACE' cowpea, 'Iron & Clay' cowpea, and sunn hemp, at three different seeding rates (70,000, 140,000 and 210,000 live seeds per acre), each with and without hybrid pearl millet (500,000 live seeds per acre). The experimental design was a randomized complete block with four replications. Individual plots were 5 ft wide × 20 ft long and were planted with a cone drill. Cool-season legume trials were coordinated following grain sorghum or cotton harvest at three sites in Runnels, Tom Green, and Reagan Counties, and following grazed out summer forages at two sites in Callahan and Runnels Counties. Treatment structure was similar, with three species (hairy vetch, Austrian winter peas, and Silver River sweetclover) planted at four different seeding rates (Table 1), each with and without rye (60 seeds/m2) for a total of 24 treatments. The design for cool-season trials was a randomized complete block with three replications.

Stand counts were coordinated in all trials once final plant stands were established. Cover crop biomass was hand sampled per plot at peak biomass production, or prior to termination for planting of the subsequent crop. Samples were dried and weighed, then ground for lab analyses. All measurements were analyzed using linear mixed models in SAS 9.4. Fixed effects were location, cover crop species, seeding rate, grass inclusion, and all interactions. Block nested within location was treated as random, and means were separated using Fisher's LSD at α = 0.05. When significant 3-way interactions occurred, effects were sliced to simplify and inform practical interpretation. 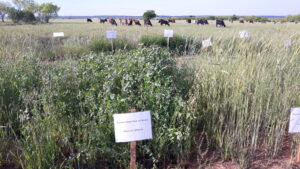 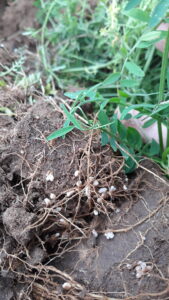 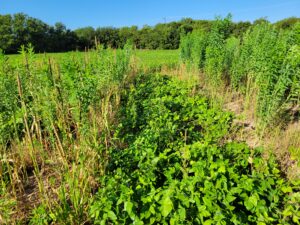 Warm-season legume trials in 2020 did not yield adequate growth for measurement. The originally planned window for this warm-season cover crop option (following wheat or grain sorghum harvest) has proven to be generally unsuitable to this region. The preceding on-farm research project in 2019 experienced similar issues with hot, dry, summer (and fall) conditions. Establishment was successful in 2020, but not until late-August or early-September. Due to their photoperiod sensitive reproductive physiology, the summer legumes began flowering and ceased vegetative growth shortly after establishment. We learned from this repeat experience that the best opportunity to use this group of species in our geography is likely with spring planting (which was successful in 2021).

Cool-season legume trials were successful at 4 of 5 locations. One of the Runnels County sites failed due to lack of rainfall. The Reagan and Tom Green County sites established, but growth was minimal, also due to lack of rainfall. Average cover crop biomass at the lowest-yielding site was only 40 kg/ha, compared to an average 1460 kg/ha at the highest-yielding site (Runnels County). Both establishment and total biomass were influenced by species, as well as the inclusion of rye (P < 0.05). Inclusion of rye increased total cover crop biomass by 150%, and decreased legume establishment by 25%. Across locations, peas resulted in the greatest biomass, followed by vetch, and sweet clover produced the least (Figure 1). Established plant density was correlated with seeding rate as expected, although legume seeding rate influenced ultimate cover crop biomass at only the two lowest-yielding sites (Reagan and Tom Green Counties). Among these, findings indicated that moderate seeding rates (rates 2 and 3) produced the greatest biomass. A more valuable finding though, is the lack of a seeding-rate effect on cover crop biomass at the two sites where greater growth was achieved (Runnels and Callahan Counties). This supports the potential to reduce seeding rates and leverage these species'  capacity for compensatory growth, minimizing the economic risk associated with planting cover crops in a marginal environment. The negligible biomass produced at Reagan and Tom Green Counties did not adequately justify planting the cover crop at all, therefore the greatest economic loss associated with this practice would have occurred with the most expensive seed inputs.

Overall findings from cool-season trials demonstrate the value of including rye (or a similar winter cereal) to supplement biomass production and presumably sequester more available N. However, this work also demonstrates the potential for rye (even at a low seeding rate of 12 kg/ha) to suppress or compete with other species in the mixture, highlighting the importance to maintain low seeding rates for the most competitive species in the mix, if a bi- or poly-culture is desired. Findings also highlight Austrian winter peas as a well-adapted, productive, and easy-to-terminate winter legume for our crop systems, and show that equivalent biomass can be achieved with reduced seeding rates (as low as 15 seed/m2 or 19 kg/ha). However, more site-years of similar data are needed to develop confident seeding rate recommendations for this geography.

The 2021 warm-season trial in Tom Green County was lost to deer herbivory, but both Coleman and Millersview (Concho County) were successful. Weeds (predominantly Texas panicum and Palmer amaranth) were present at both sites, primarily Millersview, so weed vs. cover crop biomass was separated at each sampling event. A three-way interaction occurred for cover crop biomass where sunn hemp in Coleman produced as much biomass alone as it did with millet. Otherwise, the inclusion of pearl millet increased total biomass across all species, seeding rates, and sites (mean = 2380 kg/ha) compared to the legumes alone (mean = 1260 kg/ha). Further, millet inclusion consistently reduced weed biomass (Table 2).

*Within columns, means with the same letter are statistically not different (α = 0.05).

Warm-season cover crop biomass was not influenced by seeding rate, however the lowest seeding rate resulted in greater weed biomass (616 kg/ha) compared to the medium and high seeding rates (483 kg/ha). This implies that overall biomass can be optimized with reduced seed inputs, however the existing weed seed bank and weed management objectives may warrant higher cover crop seeding rates. Overall, this work supports both sunn hemp and 'Iron & Clay' cowpea as viable summer legume cover/forage crop options in this region. Critical management factors include planting date (late planting resulted in very low biomass accumulation due to early flowering), inclusion of a grass such as pearl millet, and seeding rate considerations based on the specific weed situation per field. We also conclude that it is difficult to incorporate these species in our existing cotton, wheat, or sorghum rotations, but highlight the potential for these species in the context of alternative forages, planted and managed similar to other warm-season annual forage and hay crops.

A field tour was hosted at one of the cool-season trial sites in Runnels County on April 15, 2021. Thirteen producers and ag professionals were in attendance and spent >2 hours touring and discussing the plots and production implications relative to their operations.

A second field tour was hosted at the cool-season trial site in Callahan County on May 7, 2021. 24 producers and industry professionals attended and toured plots. 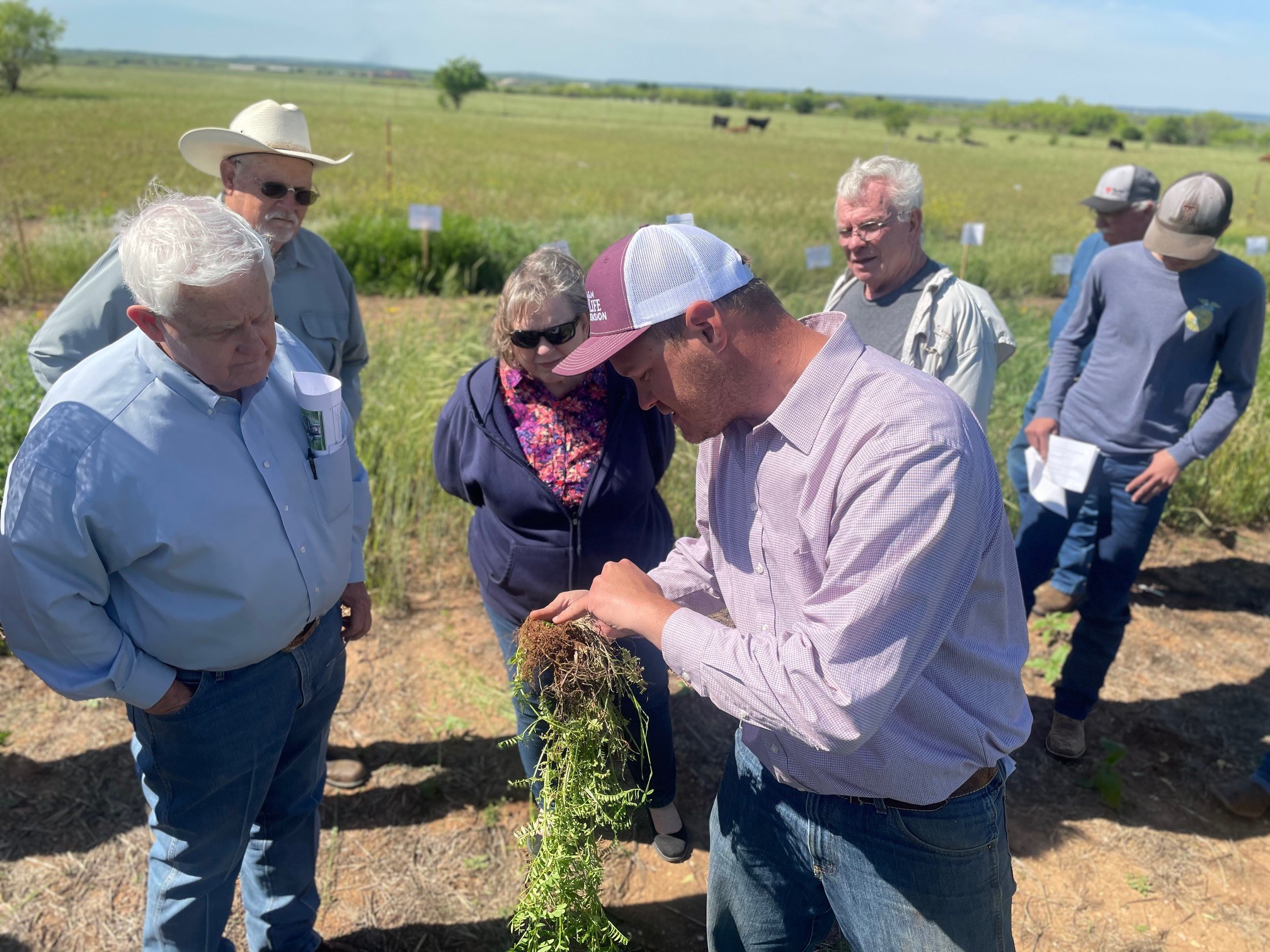 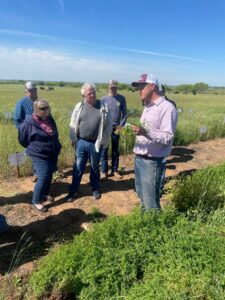 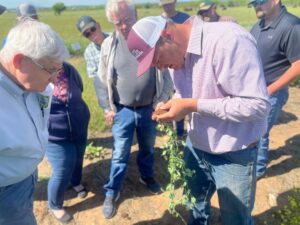 Field tours were also held at the Millersview and Coleman warm-season trials.

In addition to field tours, findings were presented at 5 county extension programs, one virtual workshop, and the national meetings of the American Society of Agronomy in Salt Lake City, UT 2021.

6 Farmers reported changes in knowledge, attitudes, skills and/or awareness as a result of their participation

This work generated a large set of on-farm data regarding cover crop management and performance across a wide range of conditions in West Central Texas. Tangible outcomes include the research findings and preliminary recommendations, such as optimum species and seeding rates depending on environmental conditions and objectives. Additional (and immediately impactful) outcomes include grower experience, relationships, and adoption of new practices. Most of the cotton in West Texas failed in 2022. Several growers saw this as an opportunity to try a cover crop and many reached out to our program for insight. One of our collaborators from this project used our experience to inform species selection and seeding rates and planted cover crops (some mixtures and some monocultures) across large acreages. We also have continued small plot work on his farm, now investigating the effects of rye seeding rate in mixtures with winter peas and turnips. Another grower consulted us and through our conversations developed his own on-farm research trial with large strips of different cover crop species and mixtures replicated across the field (pictured below). We will partner with him to coordinate measurements, which will be carried through next year's cotton crop and possibly the subsequent wheat crop.

For the majority of producers in this area, this project provided a "first look" at how legume cover crops might function in our crop rotations. Conversations surrounding cover crops are gaining frequency and interest in this region. This project demonstrated some exciting successes, but also several failures, raising our awareness to critical considerations for this geography. The information generated and principles learned from this project will have direct impact to facilitate informed and efficient cover crop integration in West Central Texas.

A critical area for future study, learned from this experience, is cover crop termination. Different species at different growth stages may be subject to different means of termination. Further, there is great concern among growers over the risk of disadvantaging the subsequent row crop by letting the cover crop grow too long, or being unable to kill it efficiently. We saw this in cotton where the vetch and sweet clover were difficult to terminate. As biomass-related benefits of the cover crop (N fixation, surface residue, overall organic matter) are presumably increased with later termination, the risk to the cotton crop becomes the major tradeoff and concern. A very approachable and informative future project could involve different termination dates, accompanied by soil and cover crop measurements, and applied in strips large enough to measure subsequent cotton tissue nutrient status and yield.