The conservation tillage systems to be tested are no-till and strip till.  Comparisons of conservation and conventional tillage practices will be made to elucidate information on costs and benefits.  Comparisons of yield performance (and financial data) of two cultivars will be among the primary data variables collected and analyzed.

The proposed research will be conducted for two years beginning April 1st, 2021 at the University of Mt Olive Kornegay Student Farm in Mt Olive, NC.  The study objectives are (1) to examine the yield of two varieties of Southern peas, 'Quick Pick' and Top Pick', under different tillage systems (conventional, strip-till, or no-till) and (2) to demonstrate the feasibility of mechanical harvest of the selected varieties.

The study was set up as a split plot design with five blocks at the University of Mount Olive Kornegay Student Farm in Mount Olive, NC on an Autryville loamy sand soil (Loamy, siliceous, subactive, thermic Arenic Paleudults).  The main plot treatment was variety with two southern pea varieties: ‘Quick Pick’ and ‘Top Pick’. The subplot treatments were tillage systems, including conventional, strip-till and no-till.  There were 15 treatment subplots per variety with dimensions of 17m by 5m each.

Biomass samples were taken at the early seed stage for the rye cover crop to estimate dry weight per acre (Gaskin et al., 2015).  A 2 by 2 ft quadrat was placed randomly at four locations in the study area.  Samples were cut and collected for each quadrat.  The samples were placed in a drying oven @ 105⁰C for 48 hours then weighed and recorded.  Dry weight data was averaged.

After the cover crop was mowed, fertilizer was broadcast at a rate of 40 lbs./ac of potash and 40 lbs./ac of gypsum according to soil test report results and Southern pea recommendations (Powell and Shaughnessy, 2003).  Rhizobial inoculant powder (Exceed) was added at planting to facilitate nitrogen fixation.

Tillage treatments were established as follows:

Subplots were disced two times to prepare the seed bed.

Subplots were prepared using a subsoiler followed by a rolling harrow single basket.  The strip width was approximately 12 inches.

Subplots had no preparation following mowing.

On May 19th, Pink Eye Purple Hull Southern Pea varieties, ‘Quick Pick’ and ‘Top Pick’, were sown at a rate of 5-6 seeds/ft. on 40 in. row spacing (Smith and Shaughnessy, 2003).  Seed depth was approximately one inch.   Exceed inoculant powder was added to the planting boxes during sowing according to instructions.

Each plot was assessed for stand count on day 14 after planting.  The 1/1000th method was used with a modification of conversion to % stand (Anderson et al., 2022).  A row length of 13 ft 1 in. was randomly measured two times per plot.  The num Within each of these zones, select an area for subsampling that is representative of that zone in terms of biomass, weeds, topography, and soil conditions. Avoid edges of the field. iii. Take one subsample in each zone as outlined in step 4. b. For fields between 1 and ber of seedlings in the area were counted and recorded.  The stand count percentages were calculated based on an estimate of six seeds per foot.  The two measurements per plot were averaged to give one value estimate.

Manual weeding was implemented for all tillage treatments two times per week.  To maintain consistency, each subplot was allotted 20 minutes and was primarily done to within one foot per each side of a row.  In cases where weeding was not completed in the allotted time, it was completed during the following weeding session.

The research area will be scouted weekly starting at week two after emergence.  Insect and diseases were managed by organic methods.

Yield of each subplot was measured by manual harvests.  The beans were harvested at the “mature green stage”.  Two- 1.3m sections of row were randomly selected in each subplot.  Whole plants were cut and placed in bags.  The pods were separated from each plant and seeds were removed from pods.  Seeds were placed in a dry oven @ 105C for 48 hours.  Dry seed weights were recorded.

To demonstrate the feasibility of mechanical harvest, an Oxbo Pixall pull-type, one row harvester was used.   The harvester required a 35 HP tractor and ran at approximately 0.33 mph.

Stand counts and yield data were analyzed using a two-way ANOVA in Systat SigmaPlot software (v.13.2).   Financial information was collected but will not be reported in year one.

Rye biomass measurements were taken in early May (early seed stage) with a dry matter estimated at 1900 lbs/ac.  The biomass amount was low likely due to seeding rate and low fertility added (cover crop profitability).   Low biomass was beneficial for managing the cover with a mower; however, the amount was inadequate for weed control which was anticipated (Dempsey, 2021).

Crop residue estimates were taken for each tillage treatment following planting with estimates of: <30% for conventional, >30% for strip till, and >75% for no-till.  The estimates meet the minimum requirements for conservation tillage practices (NRCS 1992).

Table 1.  This table shows the stand count (%) of each tillage system and variety.

Overall, stand counts were low.  This was likely due to several factors, including poor soil to seed contact and an assumption of six seeds per foot. The planter was set to sow 80,000 seeds per acre @ 40 in.  This gives an estimated 5.5 seeds per foot so counts were underestimated. 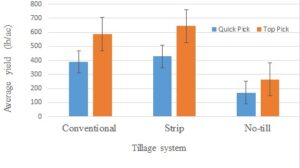 Figure 1.  This graph shows the average yield (lb/ac) of each variety by tillage system.

With tillage systems, average yield for strip and conventional treatments were not statistically different across varieties (p=0.35).  However, for both strip and conventional tillage systems average yields were significantly higher than the no-till system (p<0.05, respectively) across varieties (figure 1).   The no-till treatments showed lower yield overall likely due to poor initial stand and weed competition through the season.

The study area had high weed pressure with the presence of two species primarily, including: Poaceae brachiaria and Palmer amaranth.  Weed populations across the study area were consistent as per visual observations but no measurements were taken to verify this; the no-till plots had more weed pressure early in the season; it is likely that with inadequate cover crop biomass, weed competition contributed to lower yield.

Mechanical harvest by a single row Oxbo Pixall pull type harvester was completed on August 6th, 2021.  Both varieties were harvested successfully.  Following harvest pea pods were mechanically shelled.  For video demonstration of mechanical harvest, please  copy and paste the link into your browser or go to media files:  https://projects.sare.org/wp-content/uploads/Southern-pea-Pixall-harvest.mp4

A field day was conducted on June 19th at the UMO Kornegay student farm.  Attendees (14) included the 2021 VEBCOG participants.  A presentation and demonstration of the research was provided.  Three participants expressed interest in Southern pea production; follow up consultations were conducted with interested farmers.

On June 12th economic data was presented during online presentations with VEBCOG participants.  There were 18 attendees for this session.

On August 12th, a small group (8) participated in the mechanical harvest (demonstration) of the research plots.  Since this was our first attempt to harvest the crop with an Oxbo Pixall, we opted to maintain a small group.

17 Farmers reported changes in knowledge, attitudes, skills and/or awareness as a result of their participation

In year one, the study demonstrated that:

Year one of the study served to elucidate the possibility of Southern pea production under conservation tillage systems as well as feasibility of mechanical harvest.  Year two will build on lessons learned and increase outreach.