The use of pre-plant controlled release fertilizers (CRF) -regardless of pre-plant soil nitrogen levels- has been a common practice for years among strawberry producers on the central coast. UCCE research has questioned the efficiency and the value of CRF use, by showing that CRF releases nitrogen at a faster rate than crop uptake (leading to nitrate loss) and that reducing pre-plant CRF application by 50% or more has no effect on fruit yield. This project engages partnering professionals and strawberry producers in a collaborative research and education effort seeking to build confidence in research findings, and increase adoption of more sustainable nitrogen fertilizer use practices reflecting current knowledge and understanding. The project addresses the question:  If growers reduce Controlled Release Fertilizer application by 50% or more and instead use data driven fertigation practices is yield maintained? Project Partners will address this question  in multiple production settings and varying acreages to: a) design and implement field trials to evaluate different levels of CRF application in commercial fields, and b) interpret and disseminate the results to other growers and professionals. The experience of collaboratively designing and implementing research trials will not only produce new knowledge, but it will help growers gain confidence and ownership of the scientific research process, while helping researchers better understand barriers to adoption of new management practices.

By the end of the two and a half year project period we expect to meet the following objectives:

The project team worked with four growers to conduct experimental trials on commercial strawberry fields during the 2017-2018 crop cycle. The intent of these trials was to compare and discuss the effects of different rates of pre-plant slow release fertilizer application in terms of crop yield and variation of soil nitrogen availability throughout the crop cycle. Trials were not set up to be scientifically rigorous experiments, but they offered learning and partnering opportunities to engage growers in a conversation about nitrogen management practices in strawberry production, particularly the use of pre-plant slow release fertilizer.

In each ranch the grower selected an experimental block where the rate of pre-plant slow release nitrogen fertilizer application was reduced by an amount ranging from 40% to 100% (i.e. no pre-plant nitrogen applied), and a control block where pre-plant N was applied following the grower's regular practice. Control and experimental blocks ranged from 1400 ft2 to 1 acre. The pre‐plant slow release applied was Agriform, either Universal Mix (8‐months release, 18‐8‐13) or Northern CA Long Term (12‐month release, 18‐6‐12). Three out of four growers supplemented the pre-plant nitrogen application by injecting liquid fertilizers in the irrigation system during production season. Soil nitrate concentrations were monitored monthly on all fields and treatment blocks using soil nitrogen quick tests (MQuantnitrate test strips) with the method proposed by Hartz (1994), which is described step-by-step in the practical guide for growers presented in this report. Soil samples were taken at two depths, at the first and second foot. Total yields were measured by growers as part of commercial practice and in one ranch we measured yields weekly with a strip plot design with three replicates. Yield data were analyzed with ANOVA and repeated measures.

Soil N monitoring started in Sep-Oct 2017 when a baseline soil nitrate test was collected at all ranches, before the application of pre-plant slow release fertilizer. Subsequently, monthly soil nitrate tests were collected between Nov 2017 and Sep 2018 at each ranch, both in the experimental and control blocks. 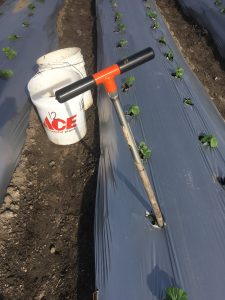 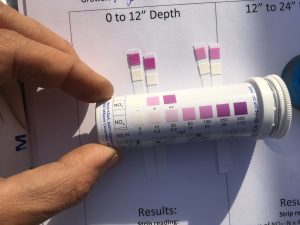 Soil N change and variability throughout the crop cycle

First-year results showed higher concentration and variability of nitrate in the first foot of soil versus the second foot of soil, throughout the crop cycle, both in control (more N) and experimental (less N) treatment blocks. This is to be expected and generally a sign of efficient management. However, the results also demonstrated high concentrations, and in a few cases very large spikes, of soil N in the second foot of soil, which is below the root zone (i.e. inaccessible to the strawberry roots). This suggests that at least some of the applied N was not used by the plants, and there might be opportunities for improving N fertilization scheduling on all ranches. Finally, the results suggest that while control blocks (more N) showed larger spikes in soil N than experimental blocks, there were no significant differences between treatments in terms of soil N availability throughout the crop cycle. In other words, the use of higher application rates of slow-release pre-plant fertilizer did not result in more soil N available to the crop. 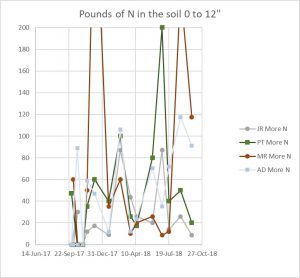 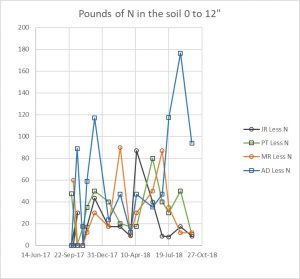 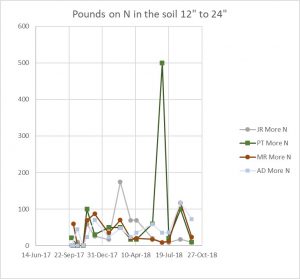 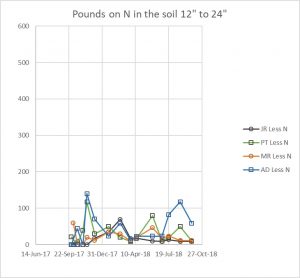 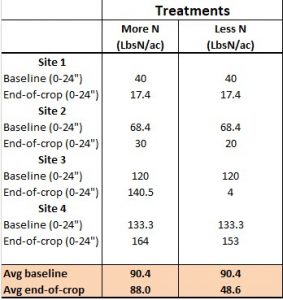 There was strong evidence of nitrate leaching by winter rains and some evidence of leaching due to over irrigation (Figure 3). We also found some evidence that fertilizer beads were still in the soil as late as June, or 8 months after application (Figure 1). Differences in plant vigor were visually apparent at the beginning of spring only in Ranch 1 and by June differences were not discernible (Figure 4). In all ranches, residual nitrogen from the previous crop and nitrate in the irrigation water provided substantial contributions to the crop total nitrogen balance, contributing to a seasonal nitrogen availability over 300 lb/ac in ranches in the low pre‐plant plots of Ranches 1 and 2 (Table 1), while in Ranches 3 and 4 the total nitrogen available in the low pre‐plant treatment was below recommended seasonal crop demand (158 and 197 lb/ac respectively). In Ranch 2, nitrate in the irrigation water and estimated nitrogen release from soil mineralization were sufficient to match the rate of 1 lb/acre day of crop uptake. 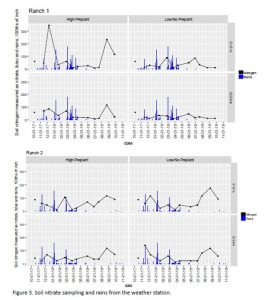 The total amount of nitrogen applied at the four ranches in the study varied substantially, but all ranches obtained good commercial yields (above 60,000 lb of fruit per year, Table 1). Ranches 1, 3 and 4 reported higher yields associated with higher rate of pre‐plant fertilizer, while in Ranch 2 no differences were observed. In Ranch 1, yields were measured weekly in a strip plot, the yield was about 13% higher for the pre‐plant treatment than in the fertigation treatment (Figure 2), despite the pre‐plant plot received from fertilizer less nitrogen than the fertigation treatment (117 vs. 158 lbof nitrogen/acre). ANOVA indicated that these differences were statistically significant (Table 2). Irrigation management at this ranch was very close to crop evapotranspiration, while over‐irrigation occurred in other ranches (data not shown). 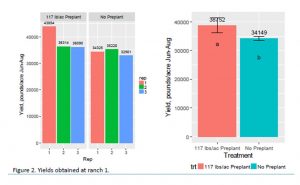 The application of pre-plant fertilizer in strawberry production used to be very common in the northern district, but growers have been phasing it out and adopting nitrogen management based on fertigation instead. The drivers of this transition are lower costs of fertilizer and anecdotal reports that high soil nitrogen concentrations negatively affect fruit quality. Previous work from the UC cooperative extension suggest that most slow release fertilizer is released in the first six months of the crop when uptake is low and leaching potential by rain is high (Bolda, et al., 2011). However, in this study we found some evidence that fertilizer was still available as late as 8 months after application, and statistically significant increase in yield in one ranch in the pre‐plant treatment. However, this data came from a one‐bed strip (52 inch wide, about 300 ftlong) in the ranch and may not be representative of field conditions. Additionally, most of the difference in yield came from one rep, while the other reps in the pre‐plant plot had yield comparable to the fertigation  plot (Figure 2). In the other two ranches that showed lower yield in the low pre‐plant treatment, the total quantities of nitrogen applied were below recommended crop uptake. We also found strong evidence of nitrate leaching following rain events, suggesting that applying large quantities of pre‐plant nitrogen in fall may lead to low nitrogen use efficiency. The nitrogen balance at the ranches showed that in some cases the contribution from non‐fertilizer sources can provide a substantial quantity of nitrogen, that sometimes can even match the crop uptake. This was the case in Ranch 2 where no differences in yield were observed. Total nitrogen application in some cases exceeded 300 lb, that is concerning, given the strict regulatory environment for water quality in California. In these scenarios, fertigation seems a more dynamic tool to adapt nitrogen management during the season. In conclusion, this work suggested that slow‐release fertilizer may remain available for plant uptake during production season and in certain conditions plant vigor and commercial yield may increase. However, pre‐plant applications cannot be adjusted during the season and unforeseen rain events can lead to nitrate leaching, while the contribution from non‐fertilizer sources of nitrogen can be substantial. In‐season fertigation allows to apply nitrogen after the rains and offers flexibility to adjust nitrogen applications with economic benefits, environmental and regulatory relief.

A field guide on how to perform a nitrate soil test was produced in English and Spanish, and presented in previous reports.

In 2019, using matching funds the project team updated the content and graphic design layout of the soil nitrate quick test practical field guide for growers, in English and Spanish: 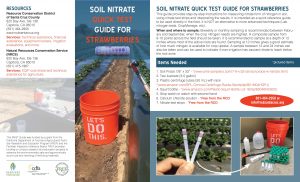 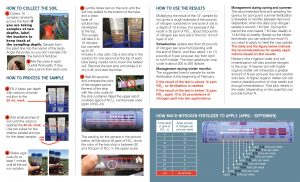 This guide has been printed and began to be distributed among strawberry producers in our area.

In 2019, the project team provided one-on-one and group trainings to a total of 27 growers (10 one-on-one and 17 in group) on how to use the soil nitrate quick test and how to inform crop nitrogen management based of soil N testing. 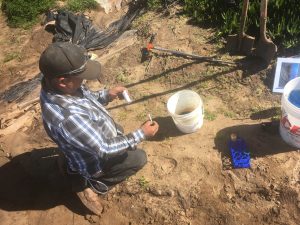 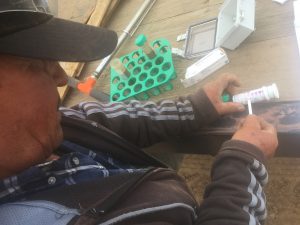 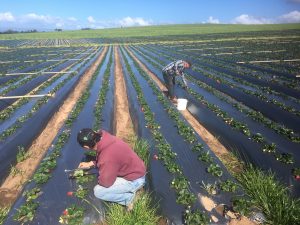 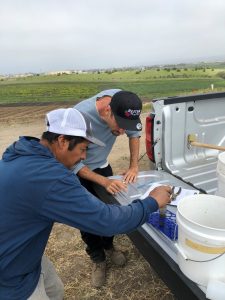 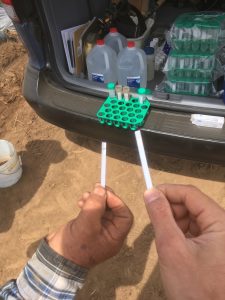 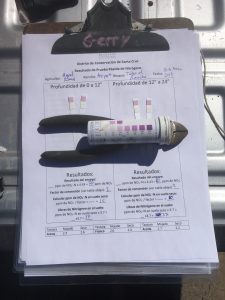 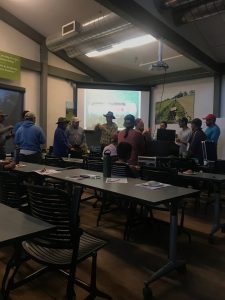 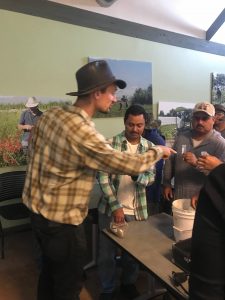 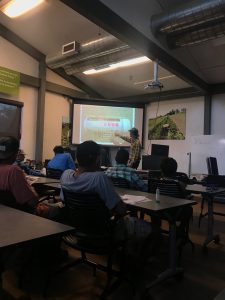 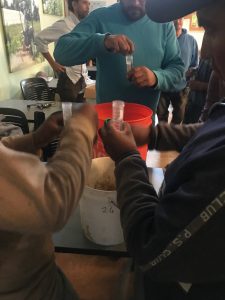 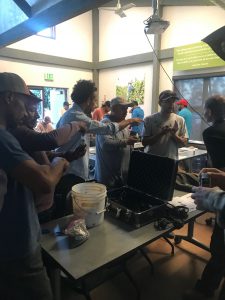 The project team hosted a field-based grower outreach event at one of the participating ranches to discuss and facilitate exchange of concepts and tools among growers related to nitrogen management in strawberry production. Topics included the use of pre-plant slow release fertilizer, highlights from the trials conducted by this project, and presentations from technical expert partners from University of California Cooperative Extension (Dr Mark Bolda and Dr Michael Cahn) related to nitrogen management. 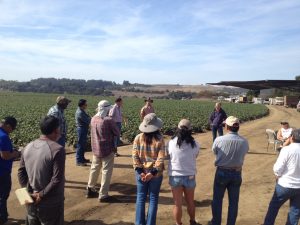 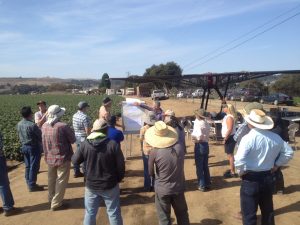 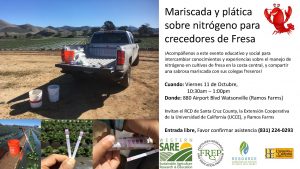 4 Producers reported gaining knowledge, attitude, skills and/or awareness as a result of the project
Key changes:
Return to Project Overview
Any opinions, findings, conclusions, or recommendations expressed in this publication are those of the author(s) and do not necessarily reflect the view of the U.S. Department of Agriculture or SARE.