Objective 3. Use established hedgerows and outcomes of this study (Objectives 1 and 2) to
support broader education goals with Conservation Biological Control through
presentations to urban and small-acreage vegetable farmers.

Methods for establishing hedgerows (Objective 1a): 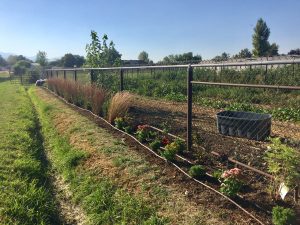 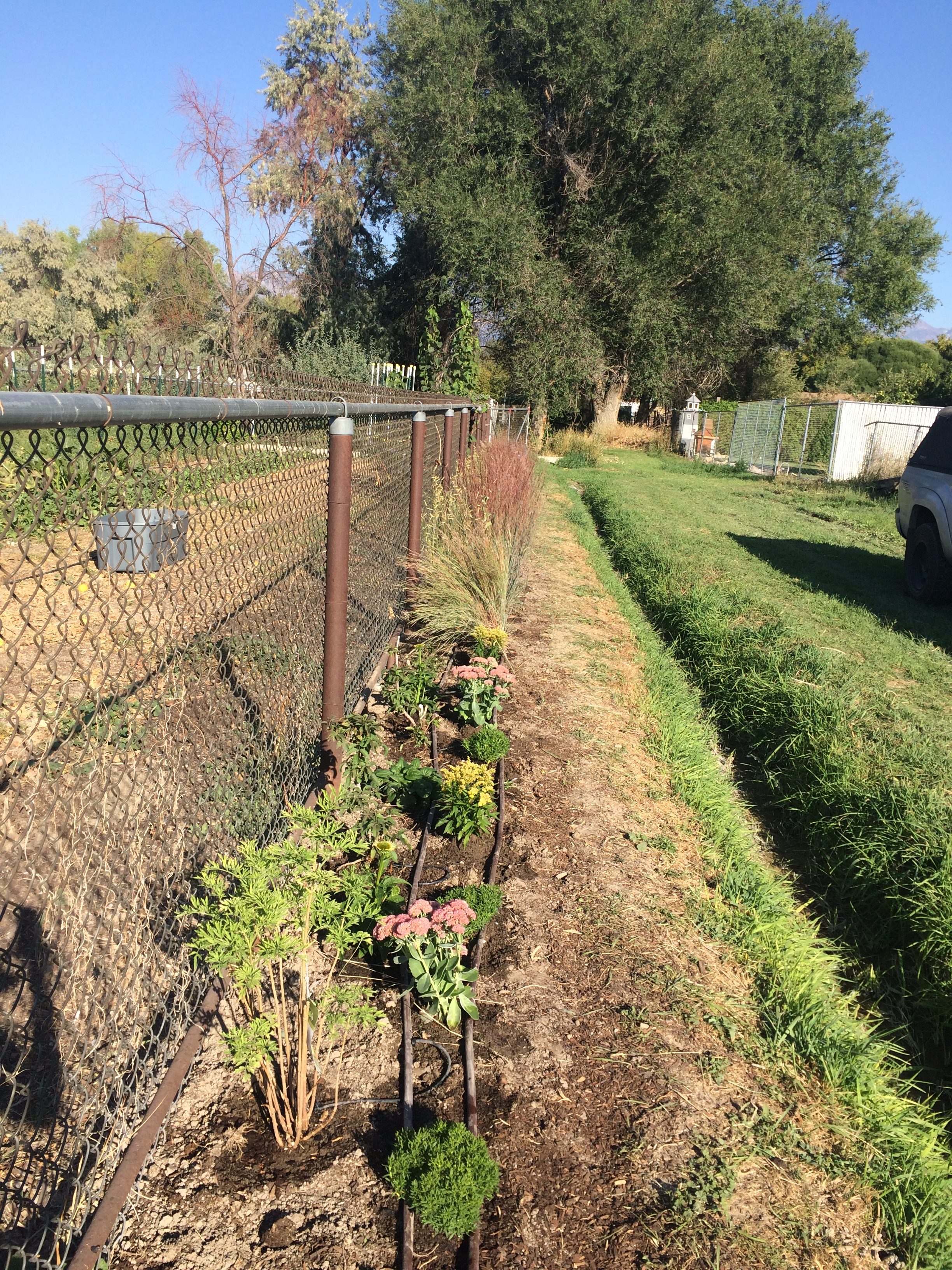 A 80 ft x 4 ft block was chosen for the hedgerow, on the west side of a concrete wall / property barrier. The area had been weedy and unsuitable for growing vegetables and was a repository for field debris. Topography was flat although situated about 6 inches higher than the main field. The area was weeded by hand and mulched in fall 2018 in preparation for planting. A mix of hardy and drought-tolerant shrubs, grasses, and perennials were chosen. 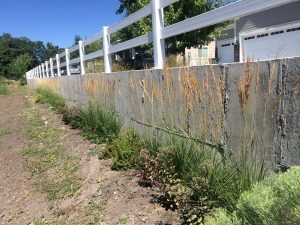 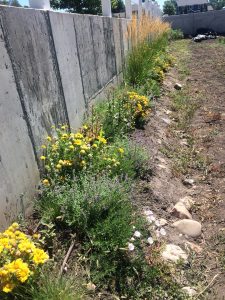 Hedge pictured in August 2019 (planting occurred in May).

A 100 ft x 4 ft block, wrapping around three sides of the vegetable plot area, was chosen for the hedgerow. Fencing encloses the garden on these three sides, so the hedgerow site is just inside the fencing. Due to the high weed pressure at the site, only hardy flowering shrubs were chosen for the hedgerow in order to facilitate weeding until establishment. The site was mulched once and weeded by hand three times in 2018 and early 2019 in preparation for planting.  In Spring 2019 two lines of Netafim were laid, followed by planting. Shrub species included golden currant, golden tower elderberry, standing ovation serviceberry, and two species of ninebark (a hardy ornamental).

A 50 ft x 4 ft block along the east side of an existing cedar hedge at the western border of the farm was chosen for the hedgerow. The block was located three feet from the cedar hedge to minimize contact with the (possibly) acidic soils. The site had low weed pressure but was partially shaded at one end. Shade-tolerant shrubs were chosen for the shaded end, and a diverse mix of flowering shrubs and perennials were chosen for the remainder. The site was hand weeded, mulched, and loosened with a broadfork prior to planting. Two lines of drip tape similar to that used elsewhere on the farm were installed by the farmer prior to planting in early September 2019. Species included dwarf peashrub, butterfly bush, false spirea, Russian sage, and cinquefoil. 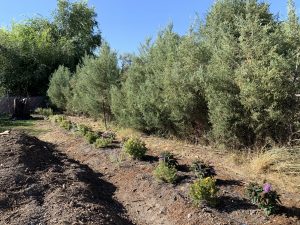 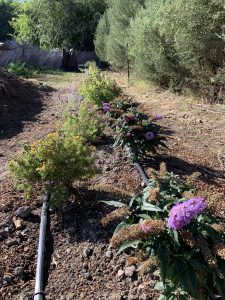 Abundance of beneficial insects (ladybugs, hoverflies, and parasitoid wasps) was assessed by visual count every other week at five sites on cole/brassica crops, with an emphasis on kale (curly, Russian, or lacinato). Xerces Society protocols for “Traveling Count” or “Stationary Count” were used, depending on the collector’s preference (count type remained consistent across collections for each collector). At some sites, data collection was interrupted when cole/brassica crops were covered or pulled out, or when weather was unsuitable (frequently in May and June, 2019).

Aphid infestation levels on cole/brassica crops were assessed weekly at five sites. A subset of five plants per brassica variety were chosen for data collection at each weekly assessment. Per-plant or pear-leaf estimates were made depending on plant size. Counts were conducted whenever it was not raining heavily. Counts were suspended when crops were covered or pulled out.

To gauge perceptions, farmers were asked about their personal assessment of aphid infestation levels and kale crop losses (from cabbage aphid) in 2019 via text, email, or in person.

Natural enemy abundance: Data indicates that all three target natural enemies are present in low or moderate abundance across sites (less than one, or approximately one individual observed per minute). Isolated surges in (different) natural enemies occurred during two aphid infestations, at different sites.

Aphid infestation levels: Three seasonal cabbage aphid infestation peaks were identified, one in early spring (consisting of overwintering/first generation aphids), one in mid-summer, and one in late fall.

The mid-summer aphid peak was identified as having the greatest potential for natural pest control via Conservation Biological Control and will be the focus of this project going forward, as early and late aphid peaks occur when natural enemies are absent from most sites. I will be focusing on hedgerow plant bloom times and the natural enemy species with natural occurrence during June and July, to test natural pest control potential during the mid-summer aphid surge.

40 Farmers
10 Ag professionals participated
Education/outreach description:
Return to Project Overview
Any opinions, findings, conclusions, or recommendations expressed in this publication are those of the author(s) and do not necessarily reflect the view of the U.S. Department of Agriculture or SARE.