Increasing evidence suggests that climate change is increasing the likelihood of co-occurring periods of
precipitation deficit and warm temperatures over the next century. Maintaining ecosystem function and
agricultural productivity on rangelands during increasingly intense and frequent periods of drought
presents scientific, economic, and social challenges. Rangeland livestock producers are often the first to
feel the impacts of drought; these impacts can be especially pronounced on California’s annual
rangelands (where the majority of precipitation and forage growth occurs in fall, winter and spring).
Structured interviews of ranchers conducted prior to and following the conclusion of California’s 2012-
2015 drought have highlighted the proactive and reactive strategies employed by ranchers to mitigate
drought effects. While early weaning is a strategy used by significant numbers of ranchers, very little
research has been conducted in annual rangeland systems to determine whether such a strategy is
beneficial economically or ecologically. The broad goal of this project is to quantify the costs and
benefits of early weaning as a drought management strategy for fall-calving cow-calf operations in
California. We will quantify the influence of early weaning on forage resources, evaluate influence on
cow and calf performance, and analyze the economic tradeoffs associated with early weaning compared
to traditional weaning strategies.

The overarching goal of this project is to work with fall-calving cow/calf ranchers to understand
the potential net economic and environmental benefits of early weaning as a drought
management strategy. Specific objectives include:
1. Quantify the influence of early weaning on cow and calf performance, pasture utilization, soil
protection, and plant biodiversity and examine how year-to-year variation in precipitation
influences early weaning effects.
2. Develop decision tools to help producers evaluate the economic and ecological tradeoffs
associated with early weaning compared with traditional weaning strategies using data
collected in objective #1.
3. Create and deliver a basic decision support guide that synthesizes the economic and ecological
tradeoffs with producer expert input to allow producers to determine how and when early
weaning may work as a drought adaptation practice for a particular enterprise. 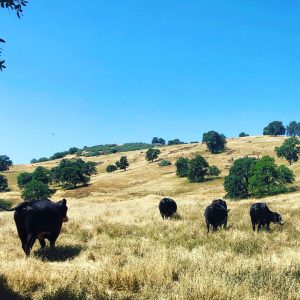 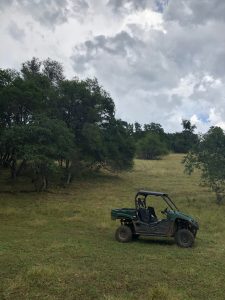 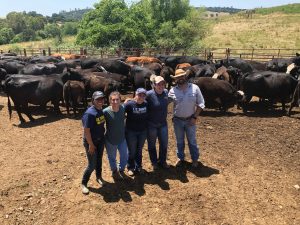 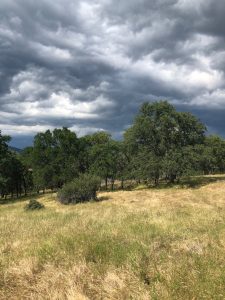 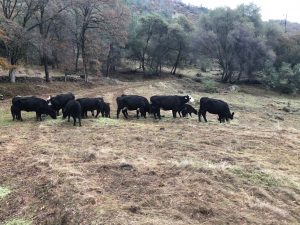 We are in the initial stages of this project. To date, we have held a producer steering committee meeting, developed a detailed project schedule, and collected initial body condition scores on the cows. This winter, we will read forage transects and plots, and wean the first calves (in early March). Normal weaning will occur in late May or early June.

Precipitation and forage production were slightly above the long-term average for 2018-2019. Even so, we measured differences in forage removal at the end of the growing season and (more importantly) at the beginning of autumn. Cattle producers on California’s annual rangelands typically focus on conserving enough dry forage at the beginning of autumn to carry their grazing operations through until fall germination and the resumption of grass growth. Autumn 2019 presented a key point of analysis; SFREC did not receive germinating rain until late November (making fall dry forage reserves critical).

While SFREC did not experience drought conditions in year 1 of this project, several foothill ranchers have contacted the project team to let us know that they did wean early due to loss of fall forage to wildfire. This suggests that there may be additional value to a better understanding of this strategy.

Our 2020 calf performance and body condition scores were similar to 2019. In addition, we found that early weaned calves continued to show a higher incidence of pinkeye, which may be related to both the stress of early weaning and the forage conditions where they were grazed post weaning.

Forage monitoring results, however, did not follow the pattern suggested in 2019 (less utilization by early weaned cows resulting in greater forage conservation). The timing and quantity of precipitation, as well winter and springtime air and soil temperature regimes, likely resulted in confounding forage production data (for this project as well as for the SFREC facility in general). Fall germination did not occur until November. Following above average rainfall in December 2019, January 2020 was below average, and February 2020 was among the driest on record. Average to above-average late spring precipitation may have resulted in regrowth of grazed forages while coming too late to benefit forage in grazing exclosures. These results likely confirm the significant differences between annual rangeland forage productivity in California’s Mediterranean climate and perennial rangeland forage productivity in other regions of North America.

Due to COVID-19 restrictions on in-person field days and workshops in 2020, we presented drought management information as part of the UC Rangelands Lab's Working Rangelands Wednesdays webinar series: https://www.youtube.com/channel/UCQnxWe9UGmy_-aHg06YZZkw

We presented preliminary results at two field days held at the UC Sierra Foothill Research and Extension Center in 2019.

In 2020, due to COVID-19 restrictions, we utilized a series of bi-weekly webinars focused on drought management to provide information to producers and agricultural professionals. These presentations can be viewed at https://www.youtube.com/channel/UCQnxWe9UGmy_-aHg06YZZkw.