Vineyard floor management relies on herbicides, especially glyphosate. This practice,
once deemed sustainable and safe, is now jeopardized by glyphosate-resistant weeds and has
come under public scrutiny. Mechanical under-vine cultivators are an option available to grape
growers; many types of equipment are commercially available. However, its adoption lags
behind the more familiar herbicide use. Under-vine cultivators' performance, costs and applications have not been
well-researched. Limited information on reliable providers further hinders adoption of undervine
cultivators. This project proposes:

Field experiments will be conducted in commercial vineyards in Oregon located in the Willamette Valley and in the Umpqua Valley. The weed control treatments are:

Treatments will be performed by an under-vine cultivator manufactured by ID-David. This equipment can accommodate all three cultivator types in a single pass, making it a more cost-effective option for growers.  Treatment plots will be arranged in randomized block design with four replicates, which will allow the evaluation of each cultivator individually or in all combinations.

Assessments will be performed 15 and 30 days after each treatment. Weed control will be scored visually using the scale 0% for no control to 100% for complete weed control. Additionally, weed growth will be monitored non-destructively using digital image analysis. Weed density and biomass will be estimated at the end of the experimental season. A comparative cost analysis for each treatment will be made including time to accomplish each treatment.

Soil compaction will be monitored using a soil penetrometer to depths of 15 and 36 inches, once per year while soil is at field capacity in late winter-early spring. Ten sites per plot will be sampled.

The cost analysis of the cultivator operation or herbicide application will be calculated on a per-acre basis by recording the cost of equipment, labor, fuel, lubrication, repairs and maintenance, materials, herbicide, and sprayer using formulas proposed by the American Society of Agricultural and Biological Engineers. Collaborating growers working with the cultivator will record operation speed (mph), operation efficiency (hours/acre), working days (days for which field operation is possible – precipitation, inadequate soil moisture, equipment reliability, down days due to maintenance, field slope, soil type, and planting density. This information will allow growers to estimate equipment compatibility with their fields, equipment requirements, and scheduling of activities. These factors will become part of the basis for management practice recommendations. Cultivators that minimally disturb soil may have an extended window of operation over those that cause greater soil disturbance.

To address the lack of information related to under-vine cultivators, we have compiled a draft document listing all equipment commercially available and vendors located in the Western Region. Only equipment with US-based technical support will be included in the list. This list will be available online and will be disseminated during extension meetings.

Four field experiments were conducted in the Willamette Valley in commercial vineyards between 2019 and 2021 (Table 1). The vineyards were between 6 to 8 ft spacing between rows. Experiments were arranged as a randomized complete block design with four replicates. Each experimental unit consisted of an entire vineyard row ranging from 200 to 350 ft in length. The weed control treatments were placed in the 1.5 ft section under the rows. Experiments between March and May depending on weather and soil conditions.

A total of six treatments were included: brush weeder, rotary tiller, hoeing blade, in-row mower, hoeing blade with rotary tiller, and a nontreated reference. Cultivations were done once on each side of the vine row with an ID David in row weeder with a single-side hydraulic articulating arm mounted on the rear of the tractor. The weeder was attached to a narrow 20 hp tractor (Kubota BH2320) equipped with a PTO hydraulic pump in 2019. In 2021, the cultivator was attached to a 100 hp narrow tractor (JD 5100GN). Figure 1). In all sites, operations were performed at 1.25 mph. 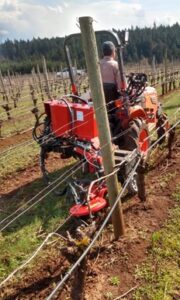 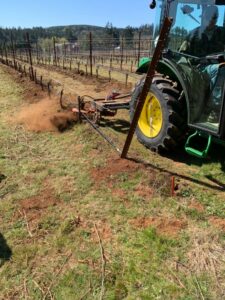 Assessments included visual estimates of weed control using the scale of 0% for no control to 100% for complete weed control performed 30 days after treatment. We collected two samples of above-ground vegetation biomass per experimental unit. Soil water content was measured using a portable moisture probe (Hydrosense II, Campbell Scientific) at the beginning of the experiment, averaging ten measurements per site before cultivation.

Objective 2. Compare under-vine cultivation equipment to herbicide application and record operational information to estimate reliability, operation capacity, and scheduling of cultivation operation during the growing season. Grower-collaborators will be actively engaged in this objective, and their input will become the basis for the emphasis of outreach events and materials

The cultivator was left with collaborating growers interested in testing the units. The grower was responsible for recording the speed of operation, the number of acres covers per day, fuel consumption, and operation performance or issues observed.

Objective 3. Compile a list of cultivators available in the market with estimated costs, operational capacity, tractor requirement, applications, and limitations and develop extension materials and presentations to promote the adoption of this technology.

To address the lack of information related to under-vine cultivators, we have compiled a draft document listing all commercially available equipment and vendors located in the Western Region. Only equipment with US-based technical support will be included in the list. This list will be available online and will be disseminated during extension meetings.

Weed control efficacy of implements was dependent on the research site (Table 1); observed variability may be attributed to differences in rainfall after treatment application. The lowest weed control was recorded in the Salem site ranging from 0 to 30% (Table 2). The field study was initiated in March 2019, when soil moisture was near field capacity (37% VWC). A total of 4.48 in of rain were recorded in the four weeks following treatments.  The wet soil condition and continued rainfall favored weed regrowth. Overall performance of the implement improved in other locations, reaching 85% weed control (Table 2).

The brush weeder implement resulted in 3 to 30% weed control across all tested sites. The brush weeder cut only a portion of the weeds present, allowing quick regrowth after treatment. Performance was better when dealing with small weed seedlings that were likely uprooted. Similarly, the in-row mower did not provide more than 20% control in Yamhill. The mower could not be used in the other locations because the weeds were too short. This implement might have better use later in the spring or early summer as a second treatment to reduce weed seed production.

Weed control with the hoeing blade was rated 26 to 70%, with greater weed control noted on sites near saturation at the time of treatment, 45 to 70% control. When used in wet soil, the hoeing blade sliced a top layer of soil but did not always disturb weed root to soil contact, thus weed regrowth was observed. The hoeing blade reduced weed biomass by 25 to 55% (Figure 1). Rotary tiller performance ranged from 3 to 85% control (Table 2). In 2019, the performance of the rotary tiller was partially limited by tractor power. The implement could not sustain its movement when the tractor engine was forced to go uphill, or excessive weed biomass obstructed its movement (Figure 2). 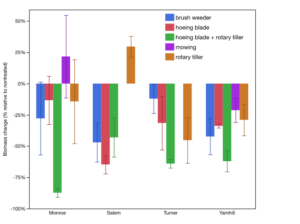 Figure 2. Weed biomass after treatment with different weed control implements under grape vine. Field studies were conducted in 2019 and 2021 in various locations in the Willamette Valley.

The hoeing blade provided the greatest level of control, ranging from 30 to 80% (table 2). Control was more consistent (70 to 80%) when performed in dryer soil. The two implements also provided weed biomass reduction ranging from 40 to 90% (Figure 1). The tiller plus hoeing blade outperformed the hoeing blade in some instances, likely because of greater disturbance of weed root-soil contact (Figure 3). 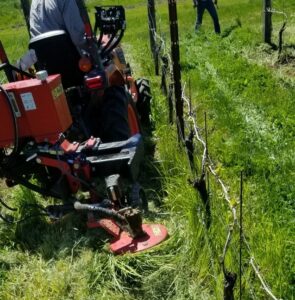 Recording of operational capacity was limited. It was only possible to work with one grower in 2019, and because of maintenance problems, the equipment was only used by the research group after that. Supply chain disruption delayed delivery of repair parts and severely limited the opportunity to conduct additional research. Further, we found changing the attachments on the cultivator and their proper setup took multiple hours. The grower-collaborator used only the tiller plus rotary blade. A list of vendors of under-vine weed control cultivators was prepared, and it will be made available to growers online. 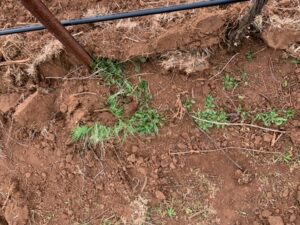 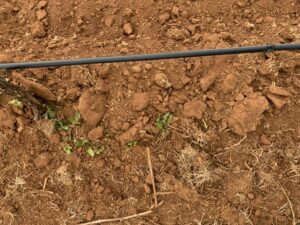 In 2019, two field days were organized in collaboration with other researchers and local industry to present the recent updates on under vine weed control.

The first field day was held in May 17, 2019 in Medford Oregon. Speakers included Dr. Marcelo Moretti, presenting the research funded by W-SARE and Mr. John Roncoronni, a University of California Cooperative Extension Weed Specialist based in the Napa Valley. Mr Roncorroni shared his experiences of weed control without herbicides. Additionally, a local vineyard consultant, Mr. Joey Myeres of A to Z Wineworks, shared his experiences and recommendations for under-vine cultivation. In the final part of the workshop, two implement manufactures, Clemens and Agrofer, demonstrated some of their implements. Over 25 local growers attended the workshop.

The second field day was organized in collaboration with Low Input Viticulture and Enology (LIVE) and held in Salem, OR in August 2019. A total of 30 growers joined the workshop to learn about the results of the under vine cultivation project.

In addition to the workshops,  Dr. Moretti was invited to present interim project results to the Eola-Amity Hills sub-AVA Association (EAHWA), an Oregon winegrower association (November 2019), and to the California Society of Weed Science (Jan 2020) in Monterey, CA.

The major challenge with this project was the small set of cultivators tested compared to the number of implements available. Acquisition costs and the time required to switch and set up implements were the chief reasons for testing fewer cultivators. In addition, in-field equipment repairs created another set of unforeseen delays. The equipment sat idle during peak season as we waited for parts. Despite technical difficulties, we successfully conducted field studies.

A second challenge is that only a few implements are tested at a time because of the extensive time needed to set-up the different implements between treatments. In general, we would spend 1.5 h or more in preparing the implement before conducting the work.

A third problem we encountered was tractor size. Our initial studies were performed with a 20 hp tractor using the PTO-driven hydraulic pump. Although that setup could operate the implement, it could not sustain proper operations under extreme conditions. For instance, we measured the brush weeder spinning speed at 1,500 rpm running idle (Figure 5), but that was visibly slowed when weeds were too large. The problem was resolved in 2021 when the program purchased a larger tractor. The larger tractor created transportation that had to be addressed as well.

In the methods for Objective 2, we proposed to let growers work with the implement during the season and collect data on operational speed, capacity, and other experiences that they may have wanted to share. Although the growers that participated in that objective enjoyed the opportunity to work with different implements, it limited our ability to conduct further research; the optimum window for weed control in vineyards can be restricted by soil moisture or rainfall. Further, we could only gather a few data grower experience data points because only one piece of equipment was available. In future studies, a survey of growers who currently own under vine implements might be a better approach to collect a larger data set and better calculate costs.

Another improvement on the methodology would be to collect more accurate information on the speed of operation and window of operation and other details from growers using under-vine cultivators. This could not be collected in tandem with efficacy studies.

Figure 5. Measurement of brush-weeder rotation in the field set up.

5 Producers reported gaining knowledge, attitude, skills and/or awareness as a result of the project
Key changes: