Larkspurs (Delphinium spp.) are native plants that grow on foothill and mountain rangelands of western North America and have a long history of poisoning grazing cattle. Ranchers who graze cattle in rangelands with large populations of toxic larkspur often have yearly herd mortalities up to 10%. These losses amount to millions of dollars due to animal deaths, increased management, and veterinary treatment costs.

The sourcing of replacement cattle from larkspur-native herds could be a simple and sustainable solution for reducing cattle losses and increase the profitability of cattle production on larkspur-infested rangelands. The results from this study will have regional impacts that will affect producers throughout the western U.S. Livestock death losses cause undo stress on livestock owners and reducing that worry and stress by knowing the livestock that are grazing larkspur-infested rangelands are resistant to the plant alkaloids can help enhance the quality of life for livestock producers.

The outcomes from this study will be disseminated through extension fact sheets, a field day, presented at scientific and producer meetings, and a peer-reviewed publication.

The objective of this study is to test the hypothesis that fewer larkspur-native animals will be lost to larkspur poisoning than larkspur-naive cattle. After the grazing season, surviving cattle will subsequently be tested for larkspur resistance at the PPRL as previously described (Green et al., 2014), to determine their larkspur phenotype and genotype. The phenotypes and genotypes will be incorporated into a genetics of larkspur resistance in cattle study currently underway at the PPRL (genotyping costs will be paid by the PPRL). 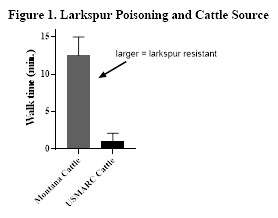 To complete this objective, grazing studies will be conducted when larkspur is growing and toxic to cattle (May 1 to October 1). Twenty Angus steers, that have not been preselected due to culling practices, and are naive to larkspur poisoning and twenty Angus steers from ranches that have historically preselected animals, due to culling practices, that are more resistant to larkspur (native) will graze together. Preliminary research (Figure 1) with six larkspur-naive Angus steers from the US Meat Animal Research Center, Clay Center, NE (USMARC) had a shorter exercise times after receiving an oral dose of dried ground larkspur compared to the exercise times of twenty-six larkspur-native Angus steers from Montana that received an oral dose of larkspur. The cattle were exercised 24 hours after the oral dose of dried ground D. barbeyi. Larkspur resistant cattle walk longer than larkspur susceptible cattle because the toxins in larkspur cause muscle weakness and resistance to exercise (Green et al., 2019a).

Grazing studies will be conducted during the summer months when larkspur is growing and toxic to cattle (May 1 to October 15). In year 1, six larkspur-naïve Angus steers from USMARC, that have not been preselected, due to culling practices, along with six larkspur-native Angus steers from ranches that, due to culling practices, are more resistant to larkspur will be grazed in year one (July 1, 2022 to August 15, 2022). Animals will be placed on a mountain rangeland infested with Delphinium occidentale on a private ranch near Cody, WY (July 1, 2022 to August 15, 2022). Due to drought conditions, at the proposed grazing site, in  2021, larkspur plants did not flower or those that did flower immediately aborted those flowers. Past research from the Poisonous Plant Research lab has found that cattle typically start grazing larkspur when it begins to flower and grazing continues as plants are flowering and turning to the seed pod stage. With larkspur not flowering  or losing flowers right after beginning to flower, grazing of larkspur would not be typical of most years and thus grazing was not conducted in 2021. Cattle have been purchased for grazing in 2022 and an alternative site has been located in Idaho. The plan is to conduct year 1 grazing at one of the two locations depending on larkspur productivity this summer (2022).

Twenty-five GPS collars were purchased in 2020. Collars were placed on stocker cattle, that are owned by the livestock producer that graze these rangelands, for the grazing season (June 15, 2021 to October 11, 2021).  Collars have been successfully used to monitor grazing distribution and grazing activity (Anderson et al., 2012). GPS collars will be placed on cattle again for the 2022 grazing season.

Bite counts will be taken on the six larkspur-naïve and six larkspur-native Angus steers during the period they will be grazing. This will give an indication when cattle start to consume larkspur and how much larkspur is being consumed. Larkspur samples will be collected weekly when cattle are grazing to determine alkaloid content of larkspur.

Cattle will be removed from the rangeland at the end of the grazing period (approximately August 15) and taken to the PPRL. Cattle will be tested for larkspur susceptibility by methods previously described (Green et al., 2014). Whole blood will be collected from each animal for genotyping prior to pasture turnout. A study of the genetics of larkspur resistance in cattle has been ongoing at the PPRL since 2006 and these genotypes (Bovine SNP50 v3 BeadChip microarray, Illumina Corp.) will be added to the genetic database for further analysis (genotyping costs will be paid by the PPRL as it is a separate research project).

Bite counts will be analyzed for the effect of larkspur susceptibility (determined by phenotype testing at the lab) by days and years on bites taken on larkspur using an ANOVA with repeated measures. GPS collar positioning data will be overlayed on to a vegetation map and location will be analyzed to determine time spent in larkspur infested areas using an ANOVA with repeated measures. Walking times (phenotype testing) among animals will be compared using Prism (GraphPad Software, San Diego, CA, USA).

Larkspur samples collected from nine locations, in 2020 and 2021, have been ground and are waiting for chemical alkaloid analysis to determine alkaloid concentration over the growing season.

GPS collars were placed on stocker cattle for the grazing season (June 15, 2021 to October 11, 2021). Collar data has been downloaded and is in the process of being prepared for analysis in ArcGIS. Vegetation maps will be created using ArcGIS software so that the collar data can be overlaid onto the vegetation map to determine grazing patterns in larkspur infested areas. GPS collars will be placed on stocker cattle for a second year. We are currently waiting for a collaborating producer to purchase stocker cattle for the second year so the collars can be placed on cattle prior to being turned out to graze for the season.

Due to Covid-19 restrictions, there have not been any field days held. In 2020, two agricultural professionals consulted with a livestock producer and his ranch hand in regard to livestock losses to larkspur. In 2021, a meeting was held at Peterson ranch near Cody, WY in which tow agricultural professionals met and consulted with 3 Forest Service personnel, 1 University of Wyoming extension personnel, and 13 rancher personnel to discuss losses that can occur due to larkspur poisoning and how to potentially avoid livestock losses.

1 Farmers reported changes in knowledge, attitudes, skills and/or awareness as a result of their participation

Outcomes from this project will lead to decrease in death loss of livestock caused by larkspur poisoning.