The Potter Valley Tribe intends to continue the cultivation of medicinal and gourmet mushrooms on our coastal land in Fort Bragg, California but grow in a significant way by adding to Western SARE's mycological knowledge. A one-of-a-kind proposal, we want to continue to expand on previous SARE research through experimenting with growing on spent coffee grounds, hardwood sawdust from sawmills, and other less frequently utilized local ‘waste’ byproducts such as hemp production. Combined with the traditional ecological knowledge of Northern Californian tribes, we want to experiment with cultivating native mushrooms from our own production of spawn. This means that we will be setting up a mushroom program within the Tribe to continue our mushroom cultivation but to develop our own methodology for production rather than purchasing spawn from other growers which we are currently doing. Potter Valley Tribe became federally recognized in 1993 but since then have made major changes to benefit Tribal members and the environment. The themes to the projects initiated by the Tribe have been environmental sustainability, agriculture, and education. Combined with Western SARE, we want to continue this legacy to benefit Potter Valley Tribal members as well as regional Tribes and Tribal youth through this integrative mushroom cultivation project. From consulting with mushroom farmers, soil scientists, and a biomimetic designer, we have and want to continue to ensure that our project is truly robust enough to be producing towards a successful and sustainable goal while adding to SARE's database for future mushroom projects.

Within 2 months, we will grow in our capacity to continue a producing and sustainable mid-scale mushroom farm

Within 6 months, and on an ongoing basis, we will contribute to SARE’s research database

Within 12 months, we will provide and continue to provide education on fungi

Descendants of the Northern Pomo people, the Potter Valley Tribe, is cultivating a small variety of mushroom species on our land in Fort Bragg, California. We began this small grow operation with the objectives of food sovereignty, sustainable agriculture, income, and education. Food sovereignty for Native Americans acts as a resurgence of culture, bolstering health, economic development, and native nationhood. Tribes across the United States have begun food programs to educate and empower Tribal members to take control of their diets. While native plants and traditional foods represent a significant portion of these programs, mushrooms are seldom recognized. Mushrooms have long been an important feature in Northern Californian diets but are rarely cultivated on Tribal lands. This project provides food sovereignty for members of the Potter Valley Tribe.

As for the specific species we cultivate they include Oyster (Pleurotus ostreatus), Turkey tail (Trametes versicolor) and Lion’s mane (Hericuim erinaceus), but we want to diversify our species for food and medicinal purposes. Oyster mushrooms are a popular beginner’s mushroom to cultivate and also serve as nutritious gourmet mushrooms. Turkey tail mushrooms have shown immune functions, antiviral effects, and cholesterol-regulating effects, among others in peer-reviewed studies (Hobbs 2004). Lion’s mane has been shown to have anti-inflammatory, antioxidative, and immunostimulating properties as well as improvement of anxiety, cognitive function, and depression (Friedman 2015). We have begun generating economic stability for Potter Valley by selling these medicinal mushrooms at farmer’s markets and local co-ops. Expanding our grow area, we will be able to generate about $12,000 for the Tribe. We want to experiment with more native varieties which will add to SARE's ethnomycological research.

Additionally, local mushroom cultivation and sale is a growing niche in the sustainable foods market (Coffey 2015). Based on previous SARE research, mushrooms act as an efficient closed-loop crop because they can be grown on production ‘wastes’ substrates such as spent coffee grounds (Susarret 2017), hardwood sawdust (Jacobson 2018), cacao shells (Allawos 2013) and spent brewer’s grain (Coffey 2015). We will continue using coffee grounds, hardwood sawdust, and others from our local businesses, effectively displaying a circular economy mechanism.

Recognizing other SARE projects directed by Tribes, such as the Hopland Tribe's just south of Potter Valley, a large part of the project will be dedicated to education. Not only will we be educating Tribes and community members on growing mushrooms from local byproducts, but we will also be teaching about traditional ecological knowledge associated with the native mushrooms. By the end of the project, we will have educated a consortium of 21 Tribal environmental employees between Mendocino, Lake, and Sonoma counties known as MLSTEP (Mendocino, Lake, Sonoma Tribal Environmental Programs) in addition to countless Tribal members and volunteers who participate in actualizing this project. Public education about fungi is paramount in terms of serving areas in need of conservation. Exchanging mycological knowledge and traditional mycological knowledge within Tribes is an opportunity to bridge knowledge systems, creating a more resilient model of fungi’s role in ecology as well as Tribal resilience in conservation.

Growing in our capacity to continue production and distribution catered for regional tribes and tribal youth
Objective:

Throughout the course of this project, working with other tribes was a priority. In order to grow in our capacity to continue production and distribution catered for regional tribes and tribal youth, it was necessary to provide an entry, or reentry, into the world of fungi through workshops, demonstrations, and group forays. It is vital to continue the cultural traditions and practices by involving youth in these initiatives. By providing diverse entry points through food and interactive education on learning about fungi, we were able to bring many participants into the project that normally wouldn't have been interested. Distribution was catered for tribes, including what mushrooms are needed versus only what we wanted to cultivate.

Outcomes and impacts:
To bring traditional uses of mushrooms, cultivation, and gathering methods into awareness from Tribal directed research
Objective:

Utilizing iNaturalist and the North American Mycoflora Project to map local species while exploring mushroom uses in traditional foods and gathering in traditional practices as well as exploring the cloning of localized species for production.

The North American Mycoflora Project (now known as the Fungal Diversity Survey) is a community science initiative to map the distribution and diversity of fungi across North America. Our project, the Mycoflora of Northern Pomo, is the first Tribal directed project and maps for the first time the relevant species to a tribe. The Potter Valley Tribe regularly takes people, and primarily tribal youth, to gather mushrooms using traditional methods. Utilizing the Fungal Diversity Survey in congruence with traditional gathering practices demonstrates how an intersection of older and newer technology can produce a better result than either would on their own. In addition both of this kind of data adds to the conversation of necessity for maintenance of cultural practices and cultural foods as they are both risk as well as the reduction of lands Indigenous people have access to in order to continue the practices.

Experimenting with different methods for cultivating fungi brings innovation to a less popular but important crop. Our cultivation strategy enacts a circular economy mechanism through growing on waste byproducts. Production usually takes the form of creation --> use --> disposal without having a clear plan for what should be done with the disposal. By utilizing local waste byproducts to cultivate mushrooms, we are creating a circle, tying the disposal to the creation. In addition, after production the spent mushroom blocks are used in the compost and eventually the native plant garden as fertilizer, effectively closing the loop. This project contributes to food sovereignty as it allows for the rights for food to be produced and distributed in a way that is sustainable and ecologically sound.

Outcomes and impacts:
To provide education on fungi through documenting the cultivation process from collection, through inoculation, to harvest
Objective:

Produce multimedia instructional products that can be used to teach many more Tribal members and interested volunteers in expanding the program.

There tends to be a lack of knowledge transfer in short-term projects such as these so before we began the project, we decided to document the whole process in order to close that feedback loop. Utilizing multimedia and specifically videos makes training more accessible to a wider range of individuals and demonstrates that this process may not be as complicated as those who are intimated may imagine. The Potter Valley Tribe has showed the comprehensive video to multiple tribes and it has inspired others to begin their own indoor and outdoor cultivation operations.

Outcomes and impacts:
To provide trainings and resources to the community for mushroom cultivation.
Objective:

Design and create a usable mushroom cultivation lab complete with training and a workshop. 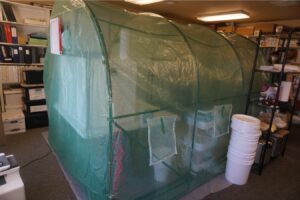 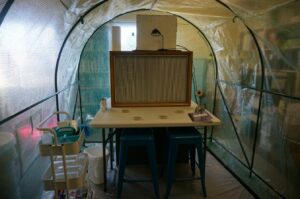 In its most basic form, a mushroom propagation lab can serve as a multi-purpose space. The lab may be used to propagate edible or medicinal species of fungi for cultivation, to ‘train’ and propagate remediator or restorative species, to develop an active culture library for cataloguing specialty or local species, and to serve as an education center to learn these skills. A lab may be tailored to suit the needs of the operators and beneficiaries, and can be quite scaleable. A flow of clean air can be maintained with a flow hood to reduce the risk of contamination at all stages. A space and technology for pasteurizing substrate will also be necessary. Aside from supplies, this is essentially all that is required for a propagation lab. The lab is located at the Community Center in Ukiah and works in conjunction with the grow room at Noyo Bida Ranch with plans to complete a second grow room with students at the South Valley High School. There are instructional documents and videos to welcome new-comers to the lab space and make cultivation more accessible.

I would recommend individuals to continue to study growing mushrooms on waste byproduct to broaden our understanding on what can be grown.