Cover crops have gained considerable attention in recent years as an important option for improving soil health and productivity on farms around the US. However, dryland agricultural systems in the western part of the country present a unique set of opportunities and challenges for cover crops. The Colorado Plateau, in particular, has a relatively short growing season along with low and erratic precipitation. Wheat-based cropping systems in the region rely on tillage and herbicide applications to keep soils bare for much of the year, and this has resulted in widespread soil degradation due to low organic matter inputs and erosion. Cover crops can help to counteract such losses in soil fertility and long-term productivity, but may also compete for water with cash crops and their net benefit remains largely unstudied in the Colorado Plateau.

Given the lack of research on cover crops in the high desert region, this project seeks to fill a critical information gap for local dryland producers. The proposed work will build on research conducted in the first phase of this project and assess the on-farm performance of different cover crop mixtures as well as the medium-term impact of cover crops on crop yields, overall farm profits, soil health, and a range of ecosystem services (e.g. soil water capture, erosion control, carbon sequestration, forage provision, weed control). Additionally, we will incorporate new research elements that emerged from Phase I (Western SARE Project SW15-008), including the testing of soil inoculants and alternative termination strategies of cover crops to minimize tillage. This project and the evolving directions of this research have grown directly out of local producer and stakeholder discussions, and represent a truly collaborative effort to understand the potential of cover crops to enhance long-term profitability and environmental quality of the region.

Replacing fallow periods between cash crops with a cover crop mixture will result in one or more of the following benefits: (1) reduction in soil erosion potential, (2) improved soil fertility, (3) weed suppression, and (4) enhanced overall profitability of the cropping system.

This project is a continuation of Western SARE Project SW15-008, in which two field trials were established on the Southwestern Colorado Research Station (SWCRC) to evaluate various cover crop mixtures. These trials were continued with the aim of assessing the effect of different mixtures (varying in legume vs grass proportion, cool vs warm season species, etc.) on biomass accumulation, soil health and ecosystem services. Cover crop mixtures were chosen in collaboration with participating farmers, NRCS staff, and research center staff. Mixtures include varying proportions of legumes, grasses, brassicas, and other broadleaves.

The first field trial was established in Fall of 2015 (Experiment 1) and compared three mixtures vs. a fallow control in a randomized complete block (RCB) design with three replicate plots. All were managed under no-till and planted to wheat in Fall of 2016. The same cover crop mixture was re-planted in September 2017, followed by wheat planting in Fall 2018.

In Fall of 2018 a third trial was established at the SWCRC to evaluate the potential of perennial grasses and legumes for soil health restoration. Eight treatments were established, including a wheat fallow control and a wheat-annual cover crop treatment. Perennial treatments varied from dryland alfalfa (a practice already used by organic wheat farmers in the region) to mixtures of ryegrass, wheatgrass, alfalfa and sanfoin. The trial follows a randomized complete block design with four replicates per treatment. Treatments will be maintained for the remainder of the project to observe productivity, soil cover, and changes in soil quality over a three-year period. Due to extremely dry conditions in Fall 2018, germination was low and stand establishment was poor. The trial was replanted in Spring 2020 and will be evaluated again in Spring 2021 for stand establishment.

In the Fall of 2019 an inoculant trial was planted at the SWCRC to evaluate different types of rhizobium inoculants (liquid, peat, and granular) compared to a no inoculant control. Additionally, this trial had a termination treatment component blocked by tillage, chemical and crimping termination methods.  The trial used the main cover crop mixture used in the on-farm trials (see below) and was terminated in the Spring of 2020.

In order to assess performance of cover crop mixtures, medium-term impacts of cover crops on soil health, and evaluate profitability of cover crop implementation, field trials of annual cover crop mixtures, which were established in Project SW15-008 as early as 2015, continued in dryland production fields of participating farmers in Colorado and Utah. Farmer fields are divided into cover crop treatments and control treatments. The control treatment is managed according to usual farmer practices, usually a cash crop followed by a fallow period. Plots under cover crop management will be planted to a cover crop when the farmer would typically leave his or her land fallow. Four local producers are continuing their participation in the project (planted to either cover crop or winter wheat in Fall 2020), and one new field in Colorado was planted to cover crop in Fall 2018 and continued for a second cover crop cycle in Fall 2020.

The cover crop mixture evaluated on-farm is consistent across all participating farms and includes winter pea, hairy vetch, winter triticale, oats, nitro radish, and rapeseed. This mixture was selected based on farmer feedback and production data collected in Project SW15-008, taking into consideration both biomass production as well as cost minimization. It includes a significant proportion of both legumes and grasses, to gain the benefits of both nitrogen fixation as well as biomass accumulation.

The following measurements are being taken to assess cover crop benefits:

Data from 2015 to 2020 were analyzed to produce preliminary results and conclusions.

Total cover crop biomass produced in 2018-2019 differed between planting windows. As seen in Figure 1, the fall-planted mixes (1 through 5) produced significantly more biomass than the spring-planted mixes (6 through 8) (p<0.001). Treatments in the fall-planted window were dominated by volunteer wheat, but to a lesser extent than previous years. Within each planting window, the different treatments/mixes did not significantly differ in terms of total biomass produced (p>0.05). 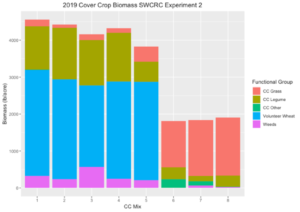 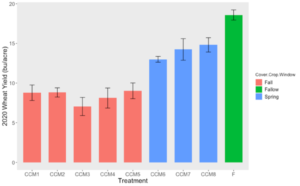 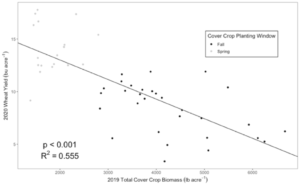 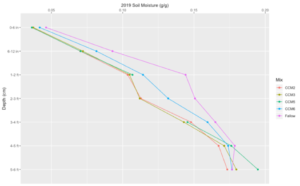 Figure 4. Soil moisture down to 6 ft in Experiment 2 for fall-planted cover crop mixes (CCM)2, 3 and 5, spring-planted CCM 6, and the fallow treatment (F). 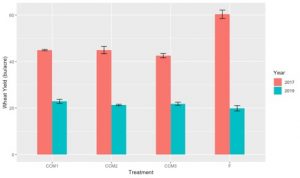 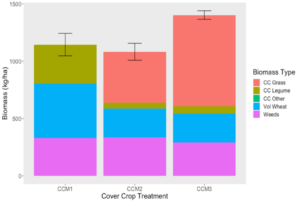 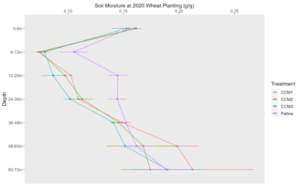 Figure 7. Soil moisture sampled at wheat planting (Sept 2020) down to 6 ft in Experiment 1 for fall-planted cover crop mixes (CCM)1, 2 and 3, and the fallow treatment (F).

Similar trends have been observed on plots located in participating farms. Biomass produced in cover crop plots on-farms has been highly variable, depending on precipitation, planting window and cover crop mix. 2017 wheat yields following a cover crop were on average 21% less than following a fallow period. However, this trend was not as pronounced in 2019 due to poor cover crop stand establishment in 2018 (Fig. 8). 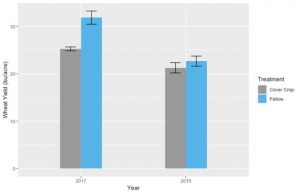 Figure 8. 2017 and 2019 wheat yields in fields of participating farmers for cover crop and fallow plots.

Soil health metrics such as total C and aggregate stability were measured in Experiment 1 in July 2018 after two full cover crop cycles. Though not significantly different (P > 0.05), cover crop treatments show a higher average total soil C content (0.76 % total C ± 0.02) relative to the fallow treatment (0.72% total C ± 0.03). Mean weight diameter of aggregates in cover crop treatments (399 um ± 67) is also slightly greater than that of the fallow treatment (374 um ± 100). These metrics typically take some time to show up. We sampled them again in July 2020 and will perform the analysis in Spring 2021.

A cover crop mixture of winter pea, hairy vetch, winter barley, forage radish, and rapeseed was inoculated with either a peat-based, granular, or liquid rhizobia inoculant before planting in Fall 2019. A control with no inoculant was also included. Root nodulation and plant biomass was measured in June 2020. There were no root nodules observed, possibly due to dry conditions. While there were no significant differences in total biomass among inoculation treatments (p=0.09), significant differences were detected (p = 0.02) using orthogonal contrast analyses to compare the group of inoculation treatments (peat-based, granular, and liquid) vs. the control treatment. On average the inoculated treatments produced more biomass than the control (non-inoculated) treatment (Fig. 9). 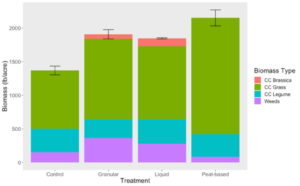 Figure 9. Biomass sampled in June 2020 in the inoculation trial, grouped by plant type [cover crop (CC) legume, CC grass, CC brassica, or weeds]. Cover crop was planted in Fall 2019 and treated with either a liquid, granular, or peat-based inoculant. The control was not treated with inoculant.

We used a strip-plot design to also examine the success rate of different cover crop termination methods, specifically roller crimping, herbicide (40 oz/acre of glyphosate), and tillage (using a field cultivator). Two weeks after termination, percent cover of bare soil, brown vegetation, and green vegetation was noted within a 0.25 m2 quadrant, taking in 3 locations per plot (Fig. 10). A visual termination rating scale of 0 to 10 was assigned to each quadrant, with 0 being no kill and maximum greenness and 10 being complete kill (Fig. 11). This method follows procedures outlined in Ashford & Reeves (2003). 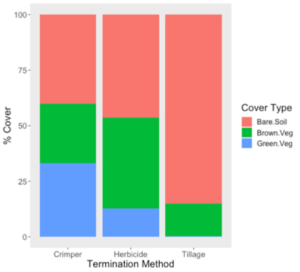 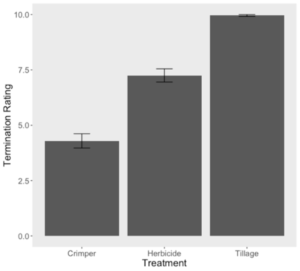 In dryland systems such as on the Colorado Plateau, cover crops present a trade-off in terms of subsequent cash crop productivity. In the first few years of the on-station trials, this trade-off has been observed, particularly following fall-planted cover crops which tend to produce the most biomass (and thus use the most water). As precipitation is extremely low in the region and water is considered to be a major limitation to production, this cash crop penalty is likely due to lower soil moisture observed in cover crop plots. However, lower available N following cover crops (potentially associated with immobilization of soil N by decomposing cover crop residues) could also be limiting wheat yields.

Nonetheless, soil health benefits could justify this decrease in cash crop productivity, particularly as soil degradation becomes a greater concern in the region and farm longevity is threatened. After only two cover crop cycles, there are promising trends in soil health metrics such as aggregation and total soil C. These metrics will continue to be monitored for the duration of the project (and hopefully beyond) to assess the potential for cover crops to improve soil health in the long-term.

A participatory research approach is being implemented to achieve the research and educational objectives of the project. We view effective outreach and demonstration as essential to introducing findings of the project to the local community and ensuring that findings are applicable to local production systems. Formal outreach and demonstration activities will include:

5 Farmers reported changes in knowledge, attitudes, skills and/or awareness as a result of their participation
Key areas taught:
Key changes:

Considerable research has been done regarding cover crops as a viable option to aid in soil and nutrient conservation in farms around the United States. Numerous benefits have been proven, including improvements to soil fertility and sustainability and profitability of farming systems. However, the extent to which these benefits are expressed is context-dependent and depends on climatic conditions as well as management practices that vary by region. The overall goal of this project is to evaluate the long-term impact and economic viability of cover crops in the high desert region of the Colorado Plateau, thereby contributing to agricultural sustainability in the region. The participation of farmers in each step of the research process will ensure that these findings are pertinent in local production systems and will aid in the dissemination of these findings throughout the community.