High-elevation sagebrush rangelands in southwest Montana are used by livestock producers for summer grazing.  These areas also provide habitat for many wildlife species, including sage-grouse hens rearing broods.  The main source of water for these mesic (high moisture) sites are large snowbanks.  As they melt, snowbanks provide water to first order streams and promote green vegetation, if the release is gradual.  Several studies have documented decreases in the size of these snowbanks and predicted they will continue to decrease in size and melt earlier in the year as a result of climate change.  To slow the release of water from these snowbanks during the summer grazing season, several ranchers and conservation organizations have installed water slowing and spreading structures.  These structures aim to 1) convert the water stored in snowbanks into increased soil moisture that will prolong water release and 2) increase plant production to the benefit of livestock and wildlife.  The purpose of this project is to evaluate the effectiveness of these structures by comparing treated areas to untreated control areas, evaluating 1) cattle use, 2) vegetative changes, and 3) arthropod responses related to sage-grouse brood rearing habitat.  We do not know of another community project like this in the western United States. This unique effort should promote the sustainability of the grazing livestock industry, improve wildlife habitat and promote land stewardship.  Results from this study will be shared with other ranchers, scientists and conservationists.  This is a 3 year study.

The objectives of this proposal are to compare areas below snowbanks with water slowing/spreading devices to areas without these structures to answer the following questions:

Identify 30 treated areas and 30 control site areas to be sampled for objectives 1,

objective 2, and compile data for objective 3.

The objectives of this proposal are to compare areas below snowbanks with water slowing/spreading devices to areas without these structures to answer the following questions:

The initial selection and construction of these structures was conducted by Bryant Jones, Barry McCoy, and Rulon Buhler of our producer team, Dr. Levine of University of Montana Western, Kyle Cutting of Red Rock Lakes National Wildlife Refuge (NFWF), and Jim Berkey and Sean Claffey of The Nature Conservancy.  Half of the costs associated with the construction and subsequent monitoring came from a National Fish and Wildlife Foundation (NFWF) grant.  The other half of the funds came from matching in-kind funds from the other cooperating institutions, including the Bureau of Land Management.  These funds were used to conduct first season monitoring of soil moisture, total area, water flow and plant cover. The NFWF grant funded a graduate student working with Dr. Litt on sage-grouse habitat, but did not include monitoring of cattle responses, plant production or all of the possible sage-grouse food items.  Our request from SARE is an attempt to assess the effectiveness of these structures from a livestock perspective, evaluate effects beyond the first season post-treatment, and to complement the wildlife habitat component.

These structures are within the 1.5 million acre core sage-grouse areas of southwest Montana, in Beaverhead and Madison Counties.  This region is nestled between the High Divide and the Greater Yellowstone area.  This region is not only important to many family-run cattle grazing operations, but is also vital towards ecotourism.  Most of the structures are located in mountain big sagebrush (Artemisia tridentate spp. vaseyana) plant communities above 6,700 ft, with the majority located on private land, with the remaining structures on public lands. 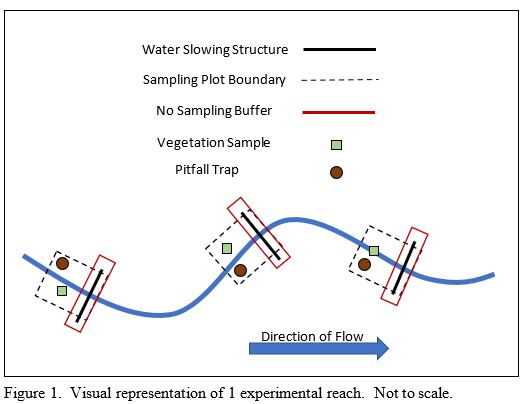 Objective 1.  Do cattle use areas with water slowers/spreaders more than control areas without any structures?

This objective will be evaluated beginning in 2021.

Thirty macroplots that are obviously influenced by water spreaders will be selected.  They may vary in size from a quarter of an acre to several acres.  Thirty macroplots of the same size will be chosen on the same ecological site to represent the control sites.  All macroplots will be visited four times when cattle are actively grazing, beginning when the cattle are turned out (June) until the end of the grazing season (August) for three years, for a total of 720 observations.  All plots will be examined for evidence of cattle use such as tracks, plant grazing use or fecal material and a resulting index of use will be estimated.

The response variable will be the number of cattle observed and the cattle use index.  Data from treated and untreated plots will be analyzed with a linear mixed model, accounting for the experimental design and repeated sampling.

Objective 2.  Do water slowers/spreaders improve herbaceous (grasses and forbs) cover and production compared to similar control sites without any structures?

Production will be evaluated beginning in 2021.

In 2019 and 2020, we sampled arthropods in each experimental reach 3 times using pitfall traps during the course of the summer field season (once monthly from June-August, Figure 1).  Arthropod samples are being sorted and identified to the level of taxonomic order and family (in some cases) to focus on groups commonly consumed by sage-grouse broods.  Data will be analyzed with generalized linear mixed models, accounting for the experimental design and repeated sampling.

Project results will be shared with producers at 2 local watershed field days and supervised by Dr. Van Emon, our producers, Jim Berkey, Dr. Levine and Kyle Cutting.  Producers, public land managers and the general public will be invited to these field days and information will be shared at agency offices in town hall forums.  The Nature Conservancy will share results on their website and social media.  Two Extension articles will be published in the Montana State University College of Agriculture and Extension Research Report.  Two research manuscripts detailing how the installation of water spreading devices influence cattle use, plant cover and productivity, and sage-grouse food items will be led by Drs. Litt and Sowell and their 2 Master’s students. Undergraduate students, supervised by Dr. Levine, will support the graduate work by assisting in field data collection and summarizing results.  A video summarizing the findings will be posted on the MSU Extension website and a podcast will be delivered as part of the outreach effort.

The 2020 field crew also deserves special recognition.  They were able to accomplish these milestones while adhering to strict COVID-19 safety protocols and living at a remote field camp.  They managed to expertly execute these methods while having no known incidents of COVID-19 exposure.

Arthropod sorting and identification is in progress and will be completed during summer 2021.  Thomas Sutton and Andrea Litt mentored an undergraduate student (Ethan Palen) to complete a research project related to the arthropod data.  Ethan presented his findings as a poster at the National Conference on Undergraduate Research in April 2021.  Thomas also has been mentoring two additional undergraduates as they help with sorting and identification.