In response to increasing consumer demand for local foods, many farm families have started or are very interested in integrating poultry enterprises in their operations to increase farm income.  Poultry are efficient converters of feed to meat or eggs, do not require much space and fit nicely as a complementary enterprise on many types of farms.

Agricultural service providers within Extension were recently surveyed in 2013 on the issue of poultry. Over 92% of the respondents felt they were not effectively serving poultry producers. Only one of the 40 respondents was confident in answering poultry related questions. At least 81% of the respondents were interested in gaining knowledge and skills in poultry science.

This project will directly involve a minimum of 20 agriculture service providers in New England and poultry producers in the region as a secondarily audience. These service providers will come from a range of backgrounds and experiences related to agriculture, technology, education and service. Each service provider will have a solid history of working directly with farmers. Eligible project participants from the six New England states will submit an application to participate. Each applicant will have the written support of their immediate supervisor.

Twenty-three agriculture service providers, with representatives from all six New England states, submitted applications to participate in the professional development project in the summer of 2014. Applications were received electronically from personnel and categorized as follows: 11 Extension, 6 non-profit, 1 farmer, 5 state agency. As per state, the number of applications were as follows: 2 from Connecticut, 10 from Maine, 3 from Massachusetts, 4 from New Hampshire, 2 from Rhode Island, 2 from Vermont and 1 from Minnesota.

A project web site has been developed and is used to post information and tools for participants. http://umaine.edu/poultry/

An additional participant from Maine Extension was added.

For the past year this website has had 4,175 page views.

Milestone 1
Thirty (30) agricultural service providers will complete an online pretest in applied poultry science as a benchmark from which to measure growth and change in knowledge and skill levels.

Twenty-two individuals completed the pretest at the start of the 3-day poultry training in October 2014. The pretest was not administered online as previously planned but for logistical reasons was administered as a paper and pencil test. Four Extension poultry specialists, who comprise the instructor team for this project, submitted questions for the pretest. Since egg production is the focus in year-one of the project, all pretest questions pertained to eggs and egg-laying birds. This same test will be given in year-two of the project to determine a “snap shot” of knowledge gain. The pretest was completed by personnel as categorized as follows: 10 Extension, 6 non-profit, 1 farmer, 5 state agency. The pretest is attached.  The average number of correct answers was 13 out of 20 or an average score of 64.

A post-test was administered in winter of 2015 to provide a “snap shot” of knowledge gained.  Seven service providers completed this test and the results are attached. The average number of correct answers was 18 out of 20 or an average score of 89. This shows a 24% improvement in test scores.

The final post-test was administered at the last 3-day training in 2016. Seventeen service providers completed this test which is attached. Sixteen got all the 20 questions correct and one person had one questions incorrect. This shows a 36% improvement in test scores from the first session pre-test. 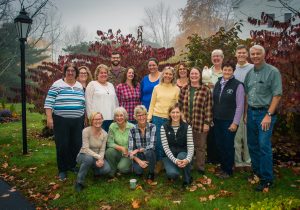 To date, three poultry-related fact sheets and one scholarly article were developed by team members.

Milestone 4
At least 20 agricultural service providers will learn about poultry anatomy by dissecting a chicken. In teams of 2 and 3 individuals, participants will dissect a chicken to learn about disease, parts & functions, the digestive tract and the reproductive tract.

On the morning of Thursday, October 23, project participants traveled to a nearby farm in Freeport, Maine and learned about poultry anatomy and physiology. University of Connecticut Extension Poultry Specialist, Dr. Michael Darre served as the lead instructor. Working in teams, participants learned how to properly catch, handle, restrain, humanely euthanize and dissect chickens. The protocol for handling and euthanizing the birds for this educational activity was approved by the Institutional Animal Care & Use Committee (IACUC) at the University of Maine. Personnel as categorized as follows took part in developing educational materials in 2014: 10 Extension, 6 non-profit, 1 farmer, 5 state agency folks.

Soon after the October 2014 seminar wrapped up, a list serve email group of project participants was established. Participants from Phase I of this professional development project were also invited to continue with the list serve. To date, 38 agriculture service providers are members of this list serve. Personnel as categorized as follows took part in problem-solving in 2014: 19 Extension, 7 non-profit, 3 farmers, 7 state agency and 2 industry.

Milestone 6
Each agricultural service provider will work directly with five farmers per year with an existing or planned poultry enterprise. Participating farmers will be asked to provide production results and basic income statements via online reporting for the respective poultry enterprises to compare performance with similar enterprises. Case studies of participating farms will be assembled for educational purposes. Using the verification template, participants will gather data from the producers with whom they are working. Project team leaders will assist as needed.

[1] When no actual financial impact was available, assumed 81% of clients contacted will make changes in their poultry care based on Backyard Poultry Post Class evaluation by poultry clientele. The financial impact from changes in poultry care was estimated at $5/bird. This increase could reasonably be expected if producers changed just one thing (ie. switched to nipple waterers from bucket waterers that would prevent bedding from getting wet which leads to decreased bedding costs and decreased losses from disease due to moist environment.) Actual financial impact would be much greater due to continued laying of birds not lost to disease.