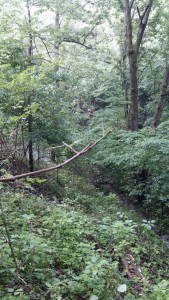 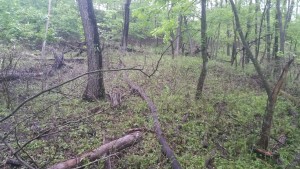 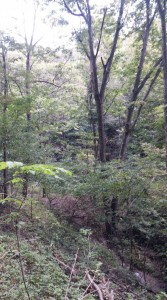 The photo gallery summarizes the visual impact of the two 1-month goat grazing periods.The photos show; before -(May) , immediately after (July), and end of season (Oct) impacts. (Photos are taken from same GPS waypoint) 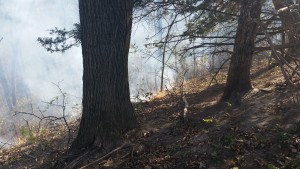 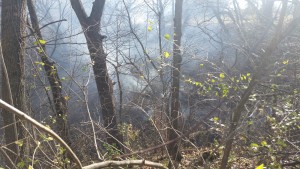 The fire photos illustrate the manageable fire intensity. Despite adequate leaf litter the fire was sparse and inconsistent due to the lack of ground cover. The invasive species had literally choked out all grasses and forbs greatly reducing fuel to sustain a hot fire.  Re-burns will be attempted annually for the next several years.

There were two primary objectives for the project:

At the conclusion of the first year of the project it would be pre-mature to make any firm conclusions other than:

* The effectiveness of goat browsing for control of invasive species can be enhanced by carefully timing the first and subsequent grazing to maximize the stress of the plants as much as possible.

However the photos attached in the previous section do illustrate that heading into the fall of 2015 there was still significant defoliation to the plants 4 months after the goats had completed their second defoliation session. This reduction of foliage provides evidence that the invasive plants will be more susceptible to winter stress and potential death.

Goats have potential to be an Ecological management tool with two aspects.

The project incorporated three sample dates. One before leaf out, the second after the first grazing date, and the third after the second grazing date. The goats did an amazing job stripping the leaves during the first grazing period in May – No bark stripping was noted during surveys. (See photos. By mid June the leaves were already leafing back out and ready for a second browsing. The second browsing period also did a fine job of stripping the leaves, again no bark stripping occurred.

There was not enough ground cover to carry a consistent and hot  fire in 2015. Follow-up fires will be required as grasses and forbs regenerate creating additional fuel to sustain a fire. The study team hypothesizes that the goats efforts will allow more light infiltration and in a season or two there will be enough ground cover to help the leaf litter carry a fire. As the fire intensity increases so will the control of the invasive species and improvement in the desired species diversity.

An early summer 2016 survey will determine woody plant kill from the initial two browses and fall timber burn. The summer survey will also record any changes in species richness of the herbaceous layer.

SARE representatives had an opportunity to visit the project while it was underway in 2015. Here is a video from that visit.