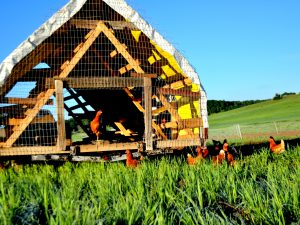 This project compares three sized pastured poultry flocks (100, 250, 450) in order to test what affect the size of the flock has on production and health. It will serve as an example to producers who are considering pasturing their layers and provide insights for raising safe and productive laying hens.

In the first year of the study, the birds went out to pasture when the fields were ready in April. We divided the flock into 3.  The two larger flocks were composed of 250 and 450 birds. For these respective flocks we utilized mobile  coops that we built in previous years. The 100 layer flock used a brand new coop we built in March of 2016.

For the first 2 ½ months they performed similarly. The 100 layer flock did lay a bit better but only by a small margin (less than 3%) and I didn’t want to draw any conclusions from this small difference.

This continued through May and into June, but by the first of July, our summer turned quite hot and dry. It was the hottest July and August we had experienced in N. Michigan and the layers' rate of lay suffered because of it. This was difficult for our farm’s finances but good for our SARE project. At this point, the larger flocks began to decrease significantly, dropping from >75% rate of lay to near 55%. Both of the larger flocks decreased significantly though the 250 layer flock performed slightly better (2-3%).

The 100 layer flock did not struggle nearly as much as the other two flocks in the unusual summer heat. Their rate of lay gradually dropped throughout the summer, but this is normal for us as the birds begin to age. By the summer, the 100 layer flock averaged about 72% which is the lower end of what we expect.

Between the growing seasons of 2016 and 2017, we contacted several farmers who raise pastured layers in hotter climates than ours in order to glean some tips on dealing with the heat. What was most clear is that in the heat, it is very important that the layer's drinking water not be too hot and that they have ample access to their feeders and waterers during this time. They primarily eat and drink during the cooler parts of the day and it is important that there is ample space for them to satiate themselves without competition or stress.
Throughout 2017, we did not see any significant differences in production between the three sized flocks. There are several potential reasons for this. I believe it is the result of several flock management adjustments we made based on the discussions we had with southern farmers. We increased the amount of feeder and waterer space in the larger flocks. We made adjustments to ensure water did not get too hot. We added extra cover for shade and predator protection. It is also worth noting that 2017 was not an especially hot summer. We had plenty of days in the high 80's and in the 90's but no prolonged periods of extraordinary heat.

There are two issues we wish to address with this proposal.