GOAL: Our goal was to re-establish perennial and annual Indigenous varieties of food for consumption by our community and by gourmet Indigenous chefs on two farms – one in Mille Lacs reservation territory and one on White Earth reservation.

In the spring of 2016 we planted two farm plots with the following plants:

One species that was not planted was Hog peanuts – bugwudj’miskodi’simin. These will be planted in 2017.

This project  is part of a three-year project to create the basis for organic certified gourmet Indigenous crop varieties, and to determine the possibility of creating a tribal organic/fair trade certification program.

The project worked on a teaching field for the benefit of tribal school children on the White Earth reservation. It also did a presentation on the Mille Lacs Reservation.

The project tried to create a product for a gourmet indigenous chief in the region.

The project began with renting land, preparing the plots, and planting species outlined in the project. The project got germination on all plant species. The plants were fertilized with fish emulsion and observations were made on effects on the various plants. The beans and corn showed improvement with the added fertilization while the squash did not – in some cases it killed the plant.

During summer, heavy rains drowned out potatoes and washed out many of the flowers.

The Bean project was the most successful of varieties that were grown. The Bean project consisted of growing three varieties of heritage beans: Cherokee Trail of Tears Black Bean, Hidatsa Shield Beans, and Taos Red Bean. The beans were planted in rows. The Black beans and Shield beans are climbing beans and string was used to create a measure for climbing. The rows were cultivated to keep weeds down and no herbicides or insecticides were applied. Fish fertilizer was used to enhance production; no commercial fertilizers were applied to the soil. The beans were planted in the third week of May with germination in four to seven days. We observed that the black beans produced more beans per linear feet of row. The rows were 40 inches apart. The beans were all harvested in mid-September. 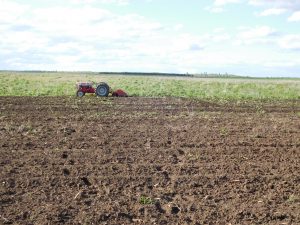 Ground being prepared Becker County (May 2016) 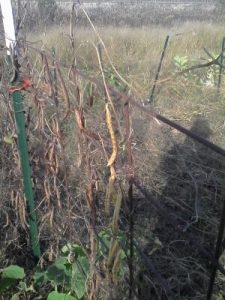 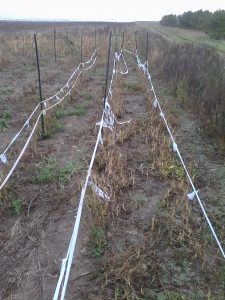 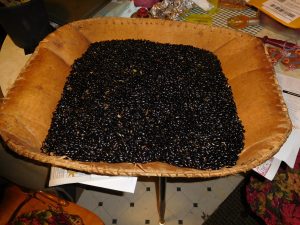 Potatoes: The heritage purple potatoes were planted the second week of May on both plots. The plots that were used became flooded when heavy rains in August (6-, 8-, and 10-inch rains). The standing water killed the potatoes and very limited potatoes were recovered. 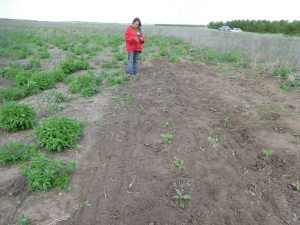 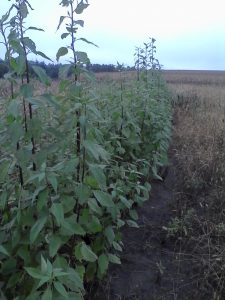 Squash; Mandan and Gete okosomia Heritage. These two squash varieties were planted the 4th week of May. There was good germination. With the application of the fish fertilizer about half of the plants died and the others were also set back. It was unclear of the cause of this. Was the mixture too rich or did these plants not like this type of fertilizer? The result was that there was very limited production and what was produced was very small. When they ripened in September the deer ate part or all of them.

Corn; blue corn varieties for hominy and a pink flour corn. These species were all plant in both areas the first week of June. The germination was good in both areas. The plants were about 3 days old in the Crow Wing plot when the deer ate them. There was one plot that was fenced and this pink corn was not eaten by the deer. The corn in the Becker County plot did not have this early problem with deer. The Crow Wing corn plots were replanted in second week of June and again the deer ate the new plants. The deer were selective in eating only the heritage plants. The corn in the fenced area and at the Becker plots continued to grow and mature. By mid-August the corn was putting on ears. The Crow Wing plot that was fenced had stalks 6 feet high with ears on most stalks. In September the raccoons came through and ate most of the crop. At the Becker County plots a black bear came through and ate both plots of corn growing there. 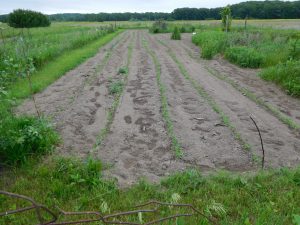 Black popcorn; A plot of black popcorn was planted in the Becker County field. The bear that ate the corn seem not to like the popcorn leaving that plot alone. It did break down the stalks. Some popcorn was harvested.

Bergamot, Milkweed and pollinator habitat: The Bergamot was planted both inside and by sowing the seeds outside. There was good germination with the seeds planted in flats but poor germination with seeds planted directly in the soil. The seeds are very small and it is believed that they are easily destroyed by rain or wind. The seeds that were germinated in flats grew well and at about 1 inch in height they were transplanted into a tilled plot. A heavy rain directly after planting drowned out many of the transplants. Some of the plants survived and grew throughout the summer. Observations will be made to determine winter survival. Milkweed seeds were planted and production was good. Milkweed was able to grow well in the different weather events.

Hog peanuts: Did not obtain seed and was not planted. 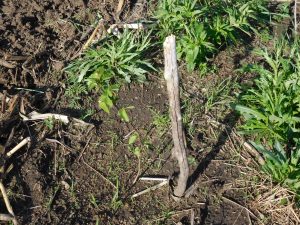 Flowers: Five varieties of sunflowers and other flower were planted on the various plots with good success. 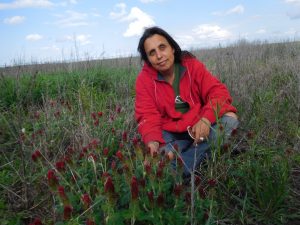 Winona in some alfalfa planted (May 2016) 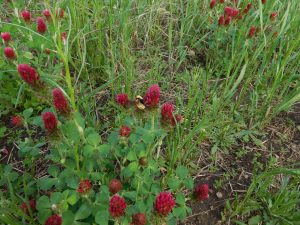 Bumble Bee enjoying the flower (May 2016)

In the 2017 growing season the project will continue with planting and growing traditional Anishinabe plants. The perennials will be expanded and there will be continued monitoring of the perennials planted in 2016. Hog peanuts will be planted this year. There will be an effort to fence the plots to reduce impacts from deer and other wildlife species. A draft ordinance will be completed related to tribal organic certification program. The project will continue to plant annual plants and measure the perennials’ progress.

The information about the project was presented both at the White Earth Reservation and Mille Lacs Reservation. This included getting the Mille Lacs Reservation to develop a program in developing agricultural activities. There were 6 community meetings conducted at Mille Lacs with a total of about 300 people attending. Two community hearings were held at White Earth Reservation in Ponsford and discussion with about 100 people. The field trips where conducted in August and about 15 people attended. The project will continue to provide information to the tribal communities.