We broadcast the rye cover crop seed at 3bu/ac using a modified Hagie on September 15, 2015. 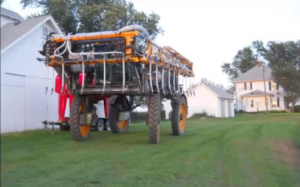 We documented growth daily for the first week and then bi-weekly on each partner’s field until it was crimped.

Mother nature provided 1.3″ of rain a few hours after broadcasting the seed. 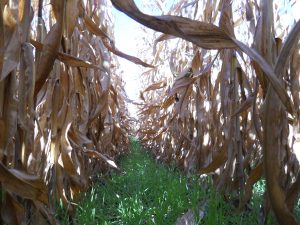 Roller Crimper Manufacturing: The roller crimper was designed after an I & J model and built by a local metals fabricator.  A modified chevron design and thicker gauge steel was used to increase dry weight and down pressure.  The result was a highly efficient 3-pt crimping tool: 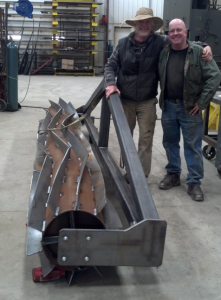 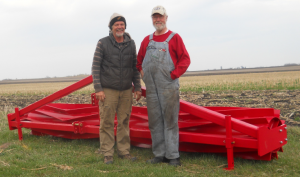 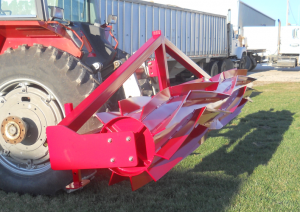 We planted soybeans with 15″ row spacing into the standing rye on 5/20/2016 and then crimped immediately afterwards over the next two days.  We crimped twice, once in each direction, to minimize re-growth.  The rye height averaged over 5′ tall.  Here is a quick peek at how it worked: 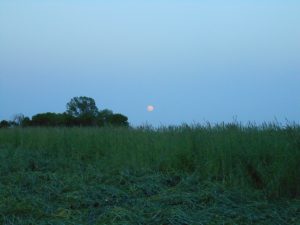 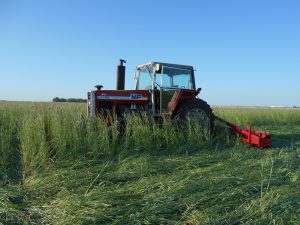 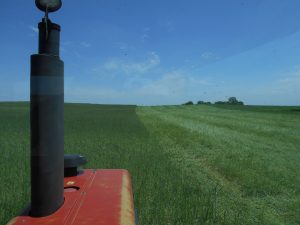 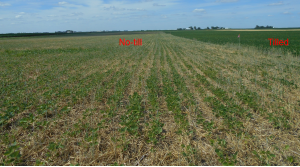 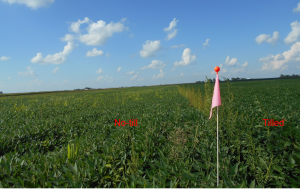 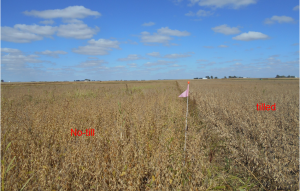 In the Partner’s tilled field comparison, the soybeans were growing normally, but so were the weeds.  Within a month, the soybeans in the no-till field caught up to their tilled counterparts with continued excellent weed suppression.  Mechanical, physical and NOP-compliant herbicidal weed control costs in the tilled field eliminated any initial yield benefits according to calculations using the Ag Decision Maker averages for labor, fuel, materials and equipment depreciation costs.

What we’ve learned so far:

We aerially applied a combination of oats and hairy vetch onto each of the soybean fields on 9/13/16.  The bio-soil enhancer was ground applied on trial plots on 10/17/16.  We want to see if the bio-soil enhancer helps the hairy vetch to over-winter and determine the extent to which N mobilization reduces the need for any additional fertilizer.  Growth records and soil-health data collection will follow a similar protocol as in Year 1. 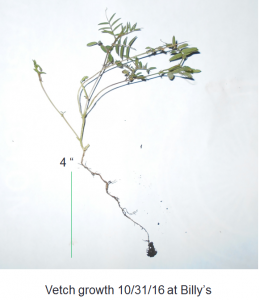 We aerially applied Elbon rye cover crop seed onto the cornfields on 9/10/16.  We will determine if an earlier maturing variety allows for earlier soybean planting and crimping of the rye afterward.

Although not part of the study, it is worth noting that the Elbon rye produced well, although the stalks were a bit thinner than the Rymin rye used last year.  We also had some issues with aerial broadcasting as the bordering areas of the fields had much less growth than the interior portions.  This factor led to more weed pressure in those areas and corresponding lesser yields.

The hairy vetch did overwinter on both farms and began growing vigorously by mid-April.  The effects of using the bio-soil enhancer were negligible and difficult to measure due to outliers in the data collection on some plots.  Data were collected to measure biomass and potential N.

In year two, each farm had raw chicken manure applied at the rate of 2.5T/ac around the middle of November, 2016.  The bio-soil enhancer was foliar applied in late June at the same 1-gal/ac rate on each of the same plots as depicted in the chart.

We had good success in year one planting soybeans into standing rye and then crimping the rye post-planting. There were some issues with the rye standing back up, but an additional crimping solved that issue. Adequate weed suppression occurred for the entire growing season and yields were similar on both farms, approximately 50/bu/ac.  There was no pest pressure on either farm.  We want to extend our findings in another project to determine if planting can occur earlier and if crimping can occur after the beans have emerged and reached a specific growing stage.  We want to experiment with variable planting and crimping date strategies.

In year two we experienced mixed results. The Hairy Vetch survived a rather mild winter and there was no significant difference between the bio-soil enhancer and control plots.  The coordinator had issues terminating the hairy vetch at 50% flowering and even after another crimping and two times mowing, the vetch still survived. This created an issue for the corn as the vetch dominated the nutrients and moisture. The tangling vines also created a strangling effect that impeded upward growth.  A no-till Buffalo, single sweep cultivator was used in an effort to salvage the corn yield, but was too late and the yield suffered significantly (180bu/ac average to 55bu/ac in this experiment).

In the Partner’s conventional field, the vetch was incorporated at about one foot of growth.  In approximately two weeks, the N from the vetch became available and the corn grew with vigor.  The Partner cultivated the field twice during the season and in-row weeds were minimized.  Both farms planted the same cultivar of corn on the same day and experienced similar, limited rain events during the growing season.  Yield at the Partner’s conventional field was approximately 140bu/ac.  The no-till portion of the Partner’s field was incorporated prior to harvest due to the strangulation affect of the hairy vetch.

We learned that hairy vetch can supply a good amount of N (approximately 100lbs/ac in our case) but the timing of that is dependent upon growth stage, moisture availability and termination date.  Termination of vetch needs to occur at “full-flowering” and in order to plant corn at a reasonable date (5/1 – 5/15) an earlier cultivar of hairy vetch is imperative, e.g., Purple Bounty.  In addition, incorporation of the vetch seems to prevent competitive interference and also accelerates nutrient availability.  This finding creates a significant challenge for a no-till operation.

One possible solution, as suggested by Jeff Moyer in a conversation at the Iowa Organic Association Annual conference this year, is to mow the vetch early in the Spring.  In trials at the Rodale Institute, mowing early seems to “trick” the vetch by accelerating its reproductive metabolism and forcing it to flower earlier than normal.  We would like to try this approach because at Rodale, the N from the vetch provides nearly all that is needed for their corn fields.  If we can duplicate this practice in Iowa, we could roller crimp the vetch and plant our corn earlier, effectively control the potential of nitrate leaching, still provide adequate weed suppression, minimize the need for supplementary N and continue to build organic matter.

Here are the technical findings from the total analyses:

We had three main hypotheses for our project:

Here is the trial design of 8, 2.5ac plots on each farm with 4 replications of with or without the bio-soil enhancer: 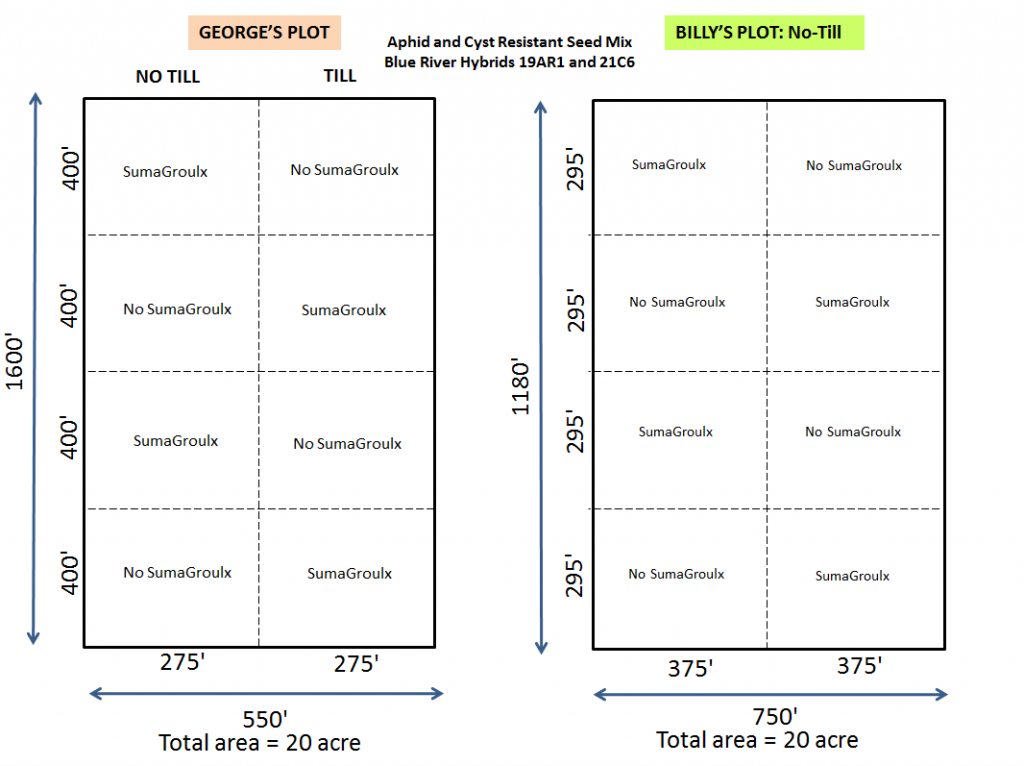 Here are the data from Hairy Vetch Biomass collection and N contribution analysis for both fields:

We roller-crimped the vetch on 5/31/17 in an effort to terminate it at about 50% flower blossom.  However, the vetch stood back up in a couple of days and seemed unaffected.  So, we crimped it again, but with the same results.  Then, we mowed it with a 7′ John Deere rotary mower.  Unfortunately, this seemed to just invigorate the vetch and it grew back quickly and even thicker.  So, we mowed it again, but it was minimally effective.  Put simply, at 50% flower stage, the vetch was impossible to terminate mechanically:

After about two weeks we tried cultivating the corn, but had to mark the rows with about 2500 flags so we could see the rows…then about three weeks later we cultivated again with the same no-till Buffalo single sweep cultivator:

Unfortunately, we were late in the growing season and since we did not have disc hillers to help with in-row weed suppression, the vetch still out-competed the corn and limited its growth.  As a result, yield was significantly compromised.

You can see the effects from the first pass on July 23rd.  Keep in mind, the rows are in the middle of the hash marks of the shovel shank: 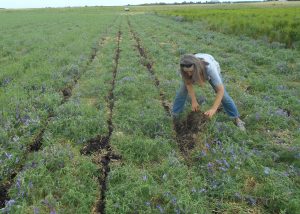 Here is a pic three weeks later and you can see how the vetch in-row grew with even more vigor after killing the between-row vetch.  As a reminder, the vetch was roller crimped on 5/31 and again on 6/8, then mowed on 6/20 and again on 6/30. 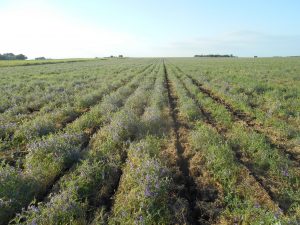 We harvested on 11/16 at Billy’s and the corn averaged about 4′ tall with small ears.  The cultivars, 9700 and 9717 from GEI seed, were a medium height, 102 (north) and 110 (central) RM variety.  In a section of the field that is more fertile, there were some places the corn was 6 – 7′ with large ears and the vetch was also patchy in those areas.  There was also about 9ac around the perimeter of the field on which very little vetch had grown.  This happened, in part, because the ground in those areas is less fertile and the applicator either ran out of vetch or perhaps the wind broadcast more toward the interior.  The yield was worst in those areas and over the entire 42-ac field, was about 55bu/ac, with a range from 0 – 100.

Example of no-vetch along a 60′ wide headlands section of the field.  It was like this around the entire field that was adjacent to our 50 – 80′ buffers. 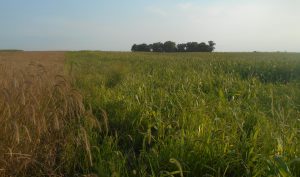 George harvested his 10-ac tilled plot on 11/8/17.  The vetch had been incorporated when it was less than a foot tall.   The corn was about 7′ on average.  The yield, with the same cultivars, was between 130-140bu/ac.  The ears were large and full.  We did not collect data from George’s 10-ac no-till field since the vetch had taken over.  George disked most of it and what corn had grown was sparse.