Our project is to optimize a short trellis system for growing the most used hops cultivar in the Michigan craft brewing industry, Cascade.  We would like to open the possibility of hops farming to more small farmers, without committing to hard-to-market dwarf varieties.  Our 2016 progress is as follows:

We purchased 400 new Cascade hops.  Seven rows were rototilled 5 ft. wide and 100 yds. long.  Spacing between rows and between plants was varied as follows, to evaluate the effect of spacing, and the interaction between plant and row spacing:

Mixed ryegrass and red clover were planted as cover crops between rows.  Straw bales were spread for mulch.

Soil analysis was performed and nitrogen/phosphorus/potassium fertilizer added at recommended rates.  Sulphur was broadcast to lower pH which began around 7.0.

14 ft. black locust poles (for longevity and organic compliance) were sunk every 42 ft. along six of the rows.  Three ft. deep holes were dug with a towable auger and a mixture of gravel and lime dust placed at the bottom of the holes.  End poles were angled outward about 20 degrees and secured to 48” ground anchors with turnbuckles for future tension adjustment.  The ground anchors were spun in manually with a crowbar.

A low, hi-tension wire was placed 18” from the ground down each row to tie twine at each plant and to support drip irrigation,   The remaining row (#5) fell between poles and had only short (2’ above ground) posts to support a low wire.

5/16” 7×19 galvanized cable was strung through eye hooks in the poles (laterally/across the rows).  3/16” 7×19 galvanized cable was strung along the rows, over the lateral cables, and secured to eye hooks at the ends with two cable clamps each.  The 3/16” cable was also used for guy wires to the anchors (one at each side pole and two at each corner pole).  Galvanized cable thimbles were used at abrupt turns in the cable (for example when reversing direction through the eye hook or at the perpendicular end wire) in order to minimize cable stress points.

Plastic tie straps were tied at the intersections of cables (lateral to longitudinal) to prevent side-to-side motion between the cables while allowing longitudinal motion which occurs as the bines grow and the weight distribution varies.  Wires were accessed from a 6’ ladder and from the back of a UTV.  Cables were unrolled by supporting the cable spool from the bucket of our tractor loader with binder chains.

Residential water was used for low initial cost and expediency.  A timer valve was attached to a house spigot.  ¾” poly tubing runs 550’ to the hop field.  A fertigation tank is mounted in parallel.  The poly tubing also serves as a header for seven T-valves, one per plant row, that feed ½” pressure compensated drip lines with ½ gph emitters.

Weeding was the greatest challenge.  To avoid non-organic herbicides, we relied on manual weeding almost every day from May through August.

Our irrigation was in place at the end of May; we began watering 2 gallons once every 3 days (alternating rows), except when it rained.  About this time, it became necessary to mow (with a brush hog) between rows and around the perimeter at least every other week.

We began composting horse manure, following the Berkley method, and fertilized the field the first week of July.

One string of sisal twine was also hung at each plant (using clove hitch knots) and the bines that had reached the low wire were trained the same first week of July.

It was expected to trim the apical meristems as the plants reached the top wire, but with first year growth, this was only possible in limited instances.  Even in those cases, the bines were at approximately full growth upon reaching the top wire (11’).  It is expected to evaluate this technique more fully in 2017.

Harvesting was conducted manually the first week of September.  The wet yield from each plant and each section was recorded for yield analysis (see below).  The hops were dried and pressed into 2 oz. hop plugs with a hand-made rig.

On September 25th, the field was once again fertilized with composted manure.  The following week, an additional 200 hops plants were purchased and planted to fill out the remainder of the control rows.

First year harvest, as is typical for hops, was insufficient to draw solid conclusions.  Nevertheless, the following analysis quantifies our yield and demonstrates the methodology to be followed again in 2017.  Depending on progress, a 3rd year may be requested to further this analysis:

The apparent main effect of row spacing was higher yield at 8’ than 10’, regardless of plant spacing (higher marginal mean of row spacing): 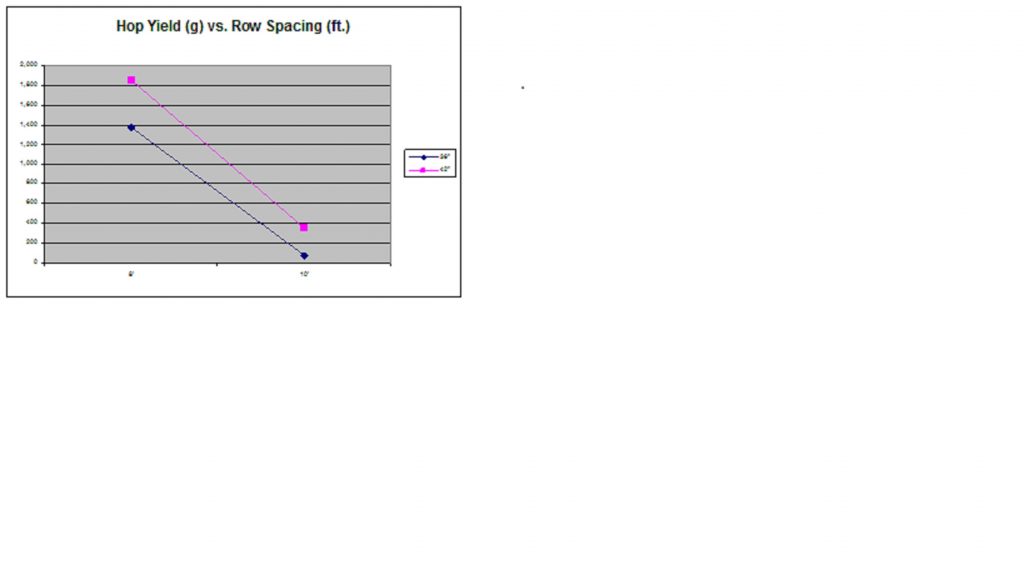 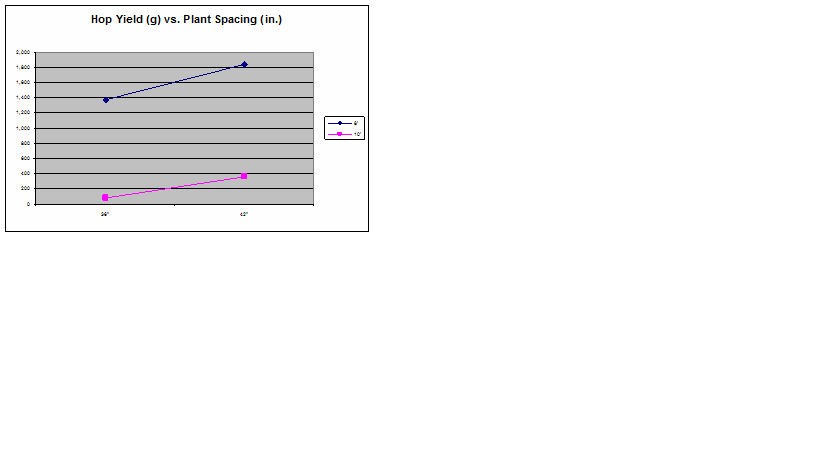 Nevertheless, the above conclusions require the two factors (row spacing and plant spacing) to be independent.  However, having plotted the yield by location, it appears that the farther from the edge of the field (the east and south edges of the hop yard—see 2016 Hop Yield plot below), the more fertile the field.  This was observed while working the soil as well—that it was heavier in clay the closer the plants were to the east and south edges.  It is hoped to overcome this by working the soil more in spring 2017, and by increasing Nitrogen application and irrigation. 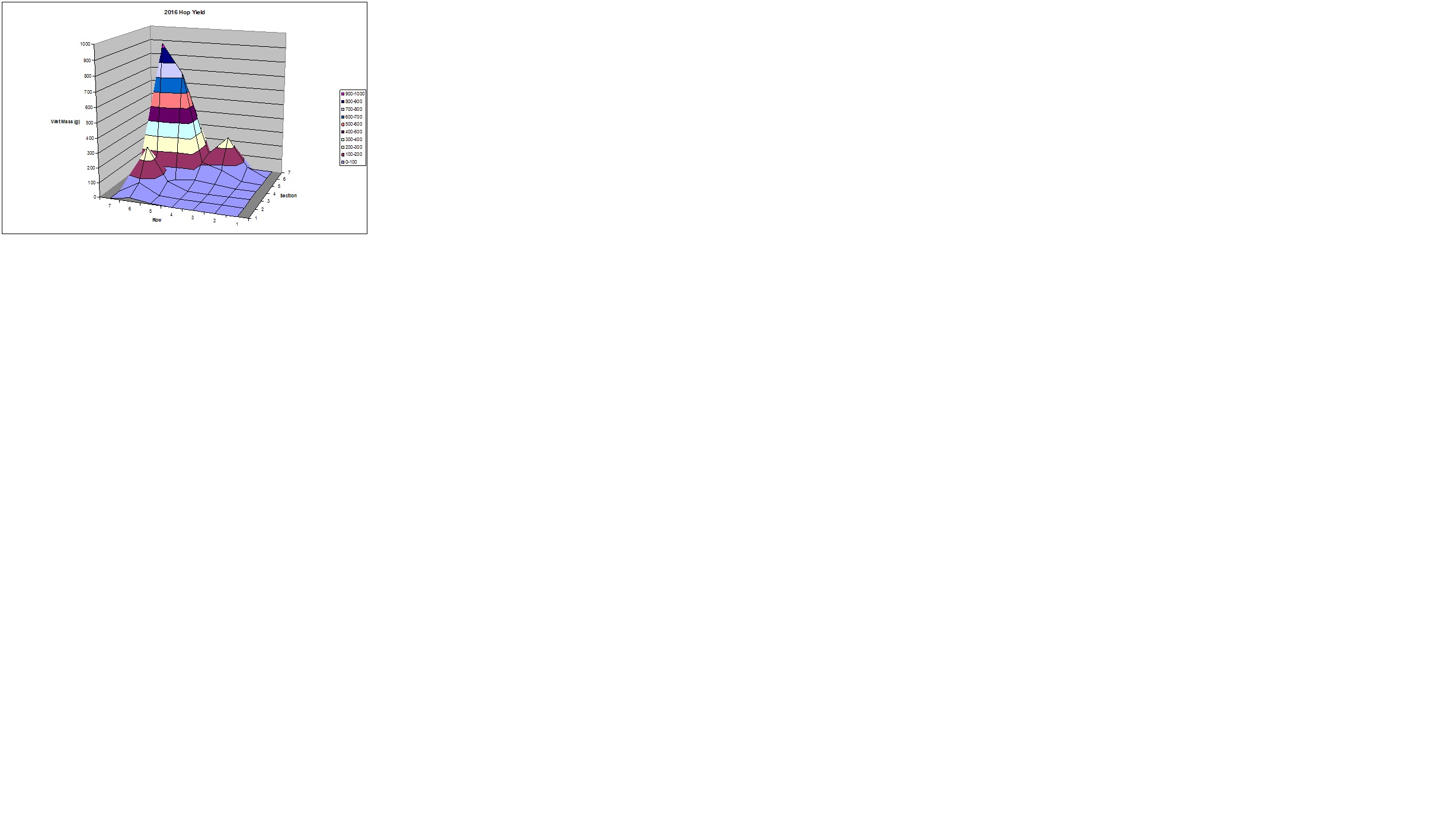 –          Even if 8’ turns out to be the more efficient row spacing, experience so far shows it too narrow for practicality in terms of getting farm equipment through.

–          Leave ample room to the edge of the field for tractor turns.  We somewhat underestimated the room on one edge, after accounting for the guy wire spacing.

–          A tractor auger would have been preferable to the manual auger for drilling post holes.  It was very labor intensive to drill the holes.  We had initially intended to go down 4’ but stopped at 3’ given the amount of effort—and this was without even any real rock issues.

–          We installed the ground anchors by hand (turning with a crowbar).  Making an adaptor for a tractor augur would have been worth the effort.

–          We purchased 7×19 strand cable as had other hopyards as described on the internet.  It seems the trend has swung toward using 1×7 strand cable for greater durability.

–          Angling the outside posts produces the strongest trellis.  If the load (from the bines) on the cable along the row matches the tension in the guy wire, the resultant force can be directed straight down the angled post, rather than producing resultant side loads.

–          We overlooked using a low wire in the initial design but eventually added one.  This is debatable but useful for tying off the twine at the bottom as well as keeping the drip irrigation out of the dirt (where it can get clogged).  The alternative is attaching twine with w-clips, which are replaced annually.

–          Trellis cable and hardware cost significantly more than the hopyard budgets I had researched online.

–          We believe we need more nitrogen (about 200 lbs./acre annually) applied more regularly through the season.

–          Likewise, we need more watering.  A solar agricultural well would be a significant improvement.

–          Ideal harvest time for our Cascade hops would have been the last week of August, earlier that we expected.

–          Our hopyard, situated in the corner of our field, seems to have more clay in the soil along the east and south edges.  We will need to till it more and add additional organic matter (potentially compost, gypsum, or peat moss).

–          Weed control appears to be the biggest challenge going forward, at least while following organic practices.

–          I thought with the pressure equalizing drip irrigation that running the dripline somewhat uphill wouldn’t be problematic.  This would be true with ample flow, but with our limited water flow, running even two rows at a time resulted in reduced output at the far end of the rows.  Running the lines downhill (even though it would result in a longer main line) would probably improve water delivery.

The short trellis already displayed benefits above a traditional 18’ trellis:

–          Posts were sourced locally, but 18’ posts would have required sourcing from Wisconsin, New York, or Northern Michigan.

–          Our hopyard is accessed through a wooded trail.  Any larger posts would have required widening the trail.

–          Raising the wires was possible from either a 6’ ladder or the back of our ATV.  I fell from the ladder once and was spared by the low height (although I probably would have been more careful up at 18’).

–          The harvest was similarly accomplished from a 6’ ladder, without investing in any capital intensive equipment.

Emphasis will be on tilling organic matter (compost, gypsum, and/or peat moss) into the heavier soil for more uniformity, and increasing application of nitrogen (from compost) and irrigation.  Additionally, we should have sufficient growth to study the effect of trimming apical meristems.

Training Hops:  tying twine and training a plant on the twine;

We plan to film additional video(s) this spring and conduct an open house in August 2017.