This project goal is to help small-scale, organic growers increase their yield of pest-free brassicas that can be sold to retail outlets.  The intent of the research is to determine whether the input of time and material cost paid for itself by increasing the number of Brassica crops that were pest-free and therefore able to be sold to retail outlets such as grocery stores and cooperatives.  Some of the significant pests in the Red River Valley for brassica crops are cabbage looper and imported cabbage worm which are difficult to control using chemical-free organic methods.  Two years of data will be collected from growing brassicas in four plots – some under fabric low-tunnel cover with and without companion flowers to attract beneficial insects.

(The results after the first year were mixed.  Many unforeseen barriers such as wildlife damage to low cover and drought conditions created challenges to plant growth and increased labor time which was spent on repairing fabric.  After experiencing these difficulties in the first year, we decided to conduct the research a second year to compare the results. For the second year, we modified the planting set up and moved the project to our new farm in hopes of lessening the challenges of animal damage to the low tunnels.)

In designing the year 2 research, the plot was condensed into 2 beds – one with fabric cover and one without. Phacelia*, also used in year 1, was already planted throughout the field. The types of brassicas were also condensed from broccoli, cauliflower, green cabbage and red cabbage to broccoli, cauliflower and green cabbage. We decided it was unnecessary to plant two cabbage varieties. Pro-19 floating row cover fabric was used because the first year we observed heat damage to our plants from the heavier fabric. Another benefit, we learned, of using a lighter fabric was that we were able to see through the fabric into the low tunnel and better monitor plant growth. 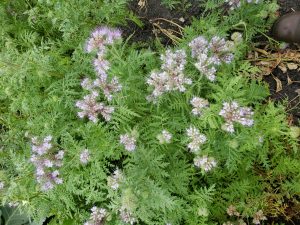 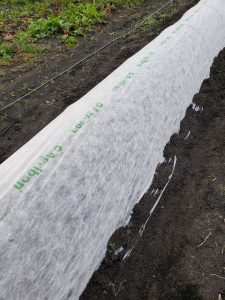 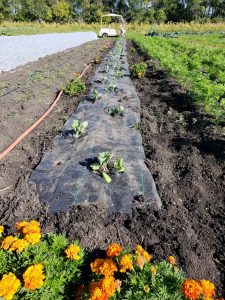 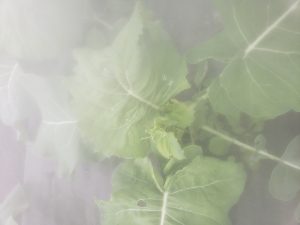 The marigolds and brassicas were grown from our seed by a local greenhouse due to lack of space in the farm’s grow room. Seedlings from the greenhouse were hardened off on the farm. The beds were prepared with drip line and plastic mulch to limit weed pressure as is done with all of our brassicas. The plants were planted on September 4, 2018 on a 75 degree day. The marigolds were planted on September 5, 2018.

Bed 1 (control bed) was 50 feet long, ran north/south and had no low tunnel fabric. The row was planted with cauliflower, broccoli and green cabbage. Established marigolds were planted around the southern half of the row

Bed 2 was also 50 feet long and ran north/south. The row was planted with broccoli, cauliflower and green cabbage and covered with lightweight Pro-19 fabric immediately after planting took place.

A written record of observations was taken weekly. During the first part of September, both rows of plants did well. As the month progressed, however, we noticed leaf damage inside and outside of the floating row cover.  At planting, minimal cabbage looper damage on the plants that were hardening off outdoors was visible. Every effort was made to remove and destroy, by hand, any trace of the pests during planting but it is possible some remained and lived inside the low tunnel fabric. 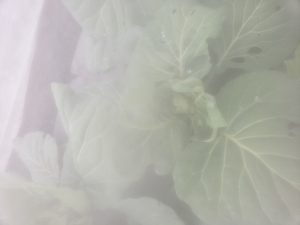 On October 1, there were no signs of pests but some plant damage was visible. Frost from September 28 and October 3rd and 4th had also damaged plants. The marigolds did not survive the frost from Sept. 28. By October 11, many of the plants were dead from October 9th and 10th blizzard conditions. Part of the low tunnel had collapsed under the weight of the snow collecting on the fabric. We continued to let the few remaining plants grow, hoping for warmer weather as the two previous years had seen long, fairly warm falls. Unfortunately, nothing survived and the plants were pulled out on October 16th and 19th. Small tears were visible around the base of the low tunnel during the tear-down process that had not been observed prior. 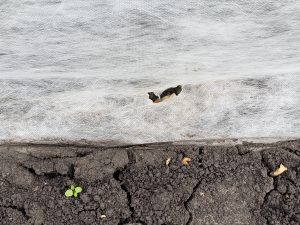 Brief discussions of this year’s research were talked over with NDSU researchers who were on the farm planting their own research plot. Had there been any data collected or a favorable outcome that might help other growers been realized, we would have compiled the information for dissemination. Unfortunately, this season’s trial did not have any successful outcomes. No measurable results were achieved in year 2 of the research.  The plants did not survive early frost and snowfall so no yield information or data are available.  Anecdotally, the plants under the low tunnel did grow faster when the weather began to cool at night but continued to suffer cabbage looper damage.

In previous seasons, no interventions were used when cabbage looper damage appeared.  The brassicas harvested were either acceptable to sell in at least one of our markets or were not edible and added to the compost pile.  This season, we did intervene by using OMRI-listed Bacillus thuringiensis (commonly referred to as Bt) in the main field only as pest pressure was high throughout the season.  The grant plot was not sprayed. The intervention added time and expense but we were able to harvest the majority of our brassica plantings with minimal pest damage.  They would have been marketable to retail outlets but we chose to market them through our CSA and farmer’s market stand. 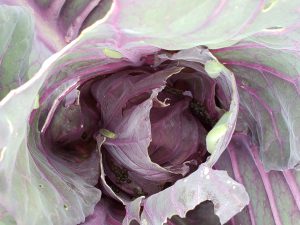 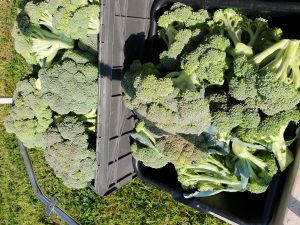 We were unable to overcome our barrier; in two years of trials, we have not harvested any plants that were of retail quality from the research plots. Each year, weather and other factors coupled with our limited planting time made the project challenging.  The result was unfavorable outcomes in year one and no measurable outcomes in year two. Due to the very late spring in 2018, we opted to set up our research plot in the fall to avoid the heat damage experienced in year one’s late spring planting. Although the cabbage looper/imported cabbage worm activity typically slows toward the end of the growing season, they are still active in the field. What we had not predicted, however, was the early start to winter. The first frost experienced on the farm was September 28, just 24 days after planting day. Subsequent frosts came on October 3rd and 4th and two inches of snow arrived October 10, 2018.  On a working small-scale farm, this intervention is too costly in both time and materials.

The most surprising find this year was when the plants under the low tunnel were taken out, 10 plants had been chewed at the base and a few snapped completely off at the stems. Voles were found living under the plastic mulch. By comparison, the rest of our main field where plastic mulch was used with brassicas was inspected but we could not find any chew marks or damage although there was evidence voles had been under the mulch. Under the low tunnel, however, several of the plants had been chewed. It is unclear whether this occurred before or after the frost. Our belief is that the warm and undisturbed area under the low tunnel created a very hospitable environment for the voles to thrive. 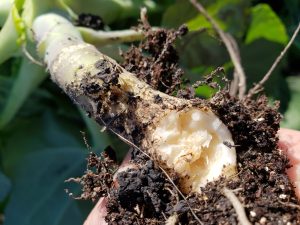 The cost breakdown, as you can see below, shows a significant cost increase for the interventions. The costs shown are for materials only, labor costs are not included. The time required to set up one row with fabric is approximately 30 minutes per row which includes setting up the hoops, covering with fabric and burying the fabric sides. Companion planting will add another roughly 30 minutes for a one time set up. The labor time does not include setting up drip tape and plastic mulch as this is done for every brassica regardless of the intervention used. If you expand this out to the entire field of roughly 22 rows, that is an extra 11.5 hours of labor. This also has to be done on a relatively wind-free day and as most of the brassicas are planted in the spring, this labor would be added to the busiest time of year. The labor for Bt application is approximately 1.5 hours per application, multiplied by 4 applications per year – roughly 6 hours of labor over the course of the season.

The cost breakdown is as follows: 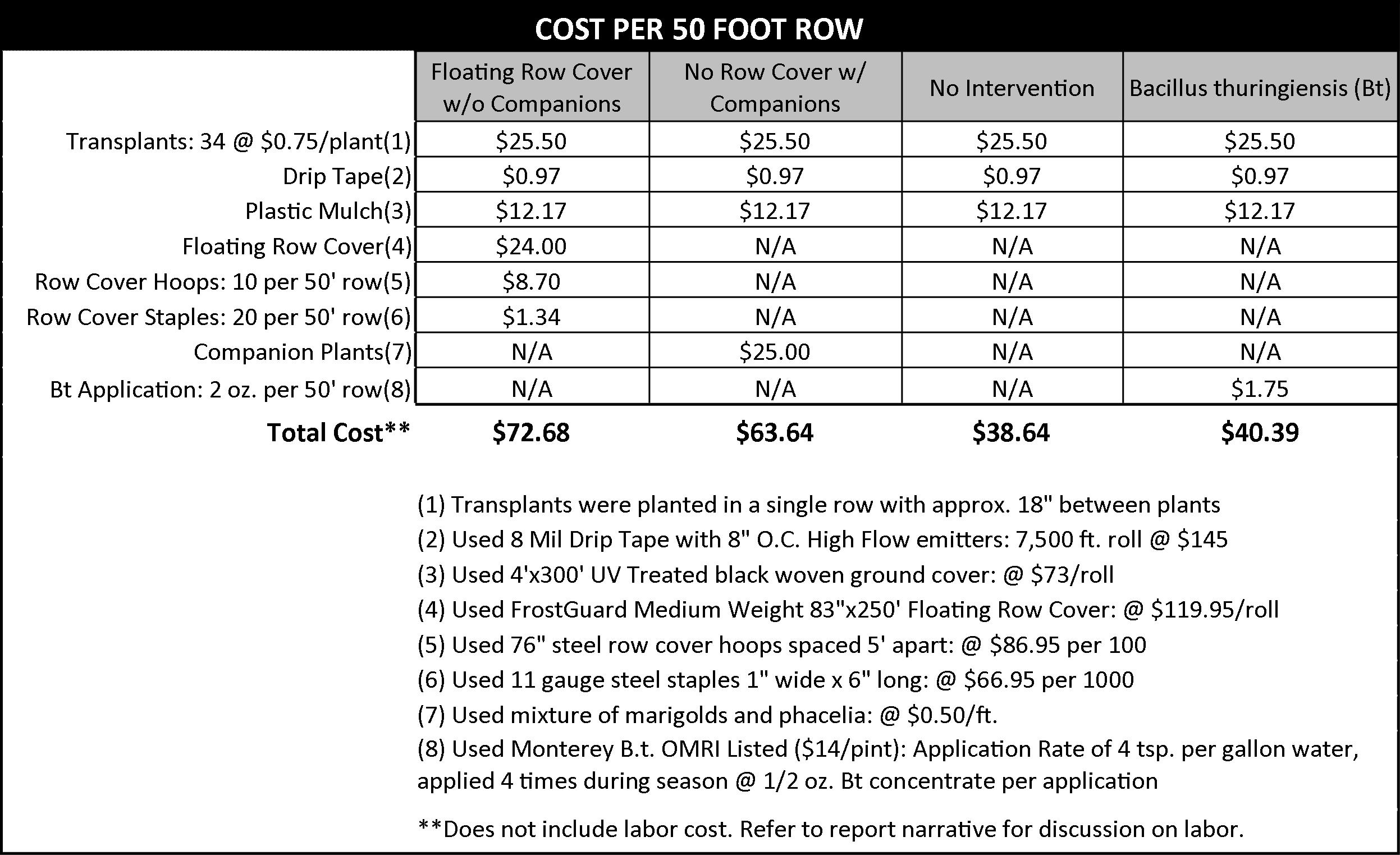 This system is more expensive than other pest control strategies. The project was done on a very small scale, we grow over a thousand brassica plants each season and the time needed to set up, monitor, and maintain this system over multiple crop successions is more than we are able to do on our farm of 2 people. The low tunnel can be very effective for trapping heat and even deterring some pest pressure but it has not demonstrated that it can be as effective as using organic sprays to stop or hinder cabbage looper/imported cabbage worm damage.

*Phacelia tanacetifolia, common names lacy phacelia and blue or purple tansy, is an herbaceous, non-legume annual in the Hydrophyllaceae family. The plant is used to attract beneficial insects such as bees and hoverflies as well being used as a cover crop and ornamental plant.

The project objectives are:

1.       Control damage caused by and presence of cabbage looper/worm on brassicas without the use of chemicals.

3.       Increase sales of small-scale growers by growing more brassicas that can be sold to retail outlets.

The project aim is to use fabric low-tunnel cover and companion planting of flowers to attract beneficial insects in order to control and/or prevent cabbage looper and imported cabbage worm from damaging the brassicas.  Damage is caused by pests chewing on the plant and reproducing/living inside of the plants.  If this method can control the pest population and is relatively low-cost and does not significantly increase the labor of the farmer(s), it could increase the ability of the grower to sell more vegetables which would translate into more income.  This could also mean more local, organically-grown vegetables available to the community.

The project will replicate particular growing methods as well as control plots for two years on a working small-scale farm to determine whether it is effective in controlling pests, is inexpensive and does not require a large increase in labor.  At the end of the project period, if it is successful, these methods will be shared with other growers.