I never thought I would be paying $200 for a bag of seed corn but yes, last year ordering my seed the cost for 80,000 seeds (about 42 pounds) was $235. I've grown open pollinated corn several other times but mostly for silage. Now I want shelled corn as corn is an organic farm's life line. With all the consolidation in the seed industry there is little hope that seed prices will ever come back down and imports will continue to drive down the price of our domestic organic corn. With seed prices commanding a large portion of the input cost something needs to be changed.

My project was looking for a suitable open pollinated corn for southeastern Minnesota that could yield well enough with its higher nutritional traits that could be financially feasible.

Sounds like an easy job but is not. I was hoping to find six open pollinated varieties in the 95 day maturity for yellow dent corn. Locally I found two and then the search began. The internet is both a savior and a curse. Several sites were found but only a few sell larger size orders for larger acres. Also few had early yellow dent corns. Thus I broadened my search to include later maturities. The curse of the internet is that you do not always get what you order. I do most of my business local and in person but that is not possible when ordering on the web. Two orders never arrived even though the checks where cashed and follow up e-mails went unanswered. I did meet my goal of six open pollinated varieties by expanding the maturity window. This made comparing yields of little value as later corn should yield higher and did in my plot.

As an organic farmer I strive for sustainable production. This means I need a variety of corn that does well with no additional inputs. The land used for this project has had no off farm products added since 2000 except inoculants for seed treatment. On farm cattle manure is used when available. The half of the plot that was in soybeans the prior year did receive manure and the sod plot received no inputs. To avoid gmo drift from neighboring fields I delay planting ten days to two weeks after they complete planting. Because of rain delays this year planting was pushed back to May 31. Both plots, side by side were chisel plowed shallow and then disked, sod twice, then dragged and planted. The weather turned very hot for two weeks and then a good rainy period followed. This provided for a second germination of seed that had not found sufficient moisture earlier. Later I found that these plants where the largest segment of the lodged plant population. This shows the importance of proper seed placement and closure pressure over the furrow. Overall the plant populations where lower than I had hoped for. At cultivation a big surprise surfaced that I did not expect. The open pollinated corns where all six to eight inches taller than the check variety. Maybe just the check variety or maybe not! The taller corn at first cultivation is anyway a big plus. This also lead to earlier canopy which can help control weeds and conserve moisture. High winds in August tipped the corn to a 45 degree angle with the hybrid check showing very little damage partly because it was a foot shorter. During the next week the corn straightened up and put brace roots down leaving the plant about six inches off the row.

With a nice September all varieties did mature but with poor drying weather harvest was pushed into November. Yields varied throughout the field because of population variation and maturity differences of the varieties. The sod plot showed about a ten bushel advantage over the soybean plot which was expected.

A selling point of open pollinated corn has always been that it is more nutritious. As part of this project I wanted to find out if it was true because usually the claim is not backed up with data. All but one of the open pollinated corns in my plot had protein levels over 10%. The check tested at 8.41% protein, a 2% advantage in protein when feeding to livestock can make a big difference in cost of the ration. The other values in the feed analysis did not vary from the check. Calculating a couple feed rations using organic soybean meal @ $850 per ton and organic corn @ $9 per bushel you can save from $.80 to $1.16 per 100 pounds of feed depending on the percent protein needed in the ration. A 16% feed ration with soybean meal at 46% and corn at 8.2% protein would mean 20.6% meal and 79.4% corn. This would produce feed costing $21.54 per 100 pounds not counting other additives needed. A ration using corn with 10.2% protein would use 16.2% meal and 83.8% corn costing $20.38 or a savings of $1.16 per 100 pounds. This is assuming amino acid profiles are similar which were not tested in this project.

Today's open pollinated corns are different that those grown by our grandparents, likely due to wind born pollen contamination and crossings. Growers of the open pollinated corn do not have the facilities to condition the seed as well as the large corporations thus resulting in lower seed quality. Most of the open pollinated varieties have maintained an advantage in protein content but not higher levels of minerals. There is still a problem with lodging in open pollinated corn partly due to ear placement and height of plant. With more research and dedicated individuals working on developing new synthetic open pollinated corn varieties, the future could look bright. The two corns with the highest yields had been crossed with other varieties in their past and I think that gives them some hybrid vigor in addition to more genetic diversity. I did save some seed back and plan on doing a cross next year to see what it looks like. As with anything new, go into raising open pollinated corn in a small way until you are comfortable with the risks.

Growing a crop comes down to showing a profit. Some years will be better than others so several years of data are needed to make a solid conclusion. With just one year of data this looks feasible. The check hybrid averaged 137.65 bushels per acre @ $9 dollars per bushel and would provide $1238.85 in gross income. Since the only different cost between the corn varieties was seed cost, the check seed cost about $90 per acre leaving $1148 income. The closest open pollinated in maturity was Mn13, it yielded an average of 117.82 bushels, giving a gross income of $1060.38. Seed cost with shipping was about $40 per acre leaving $1020. The additional protein in the open pollinated Mn13 variety if used as feed would save most or all of the $128 difference in gross income. In this plot the next closest variety in moisture level beat the check in yield and protein level. With current grain standards the higher protein corns are not worth anything more on the regular market so growers would have to market direct to find a better price. 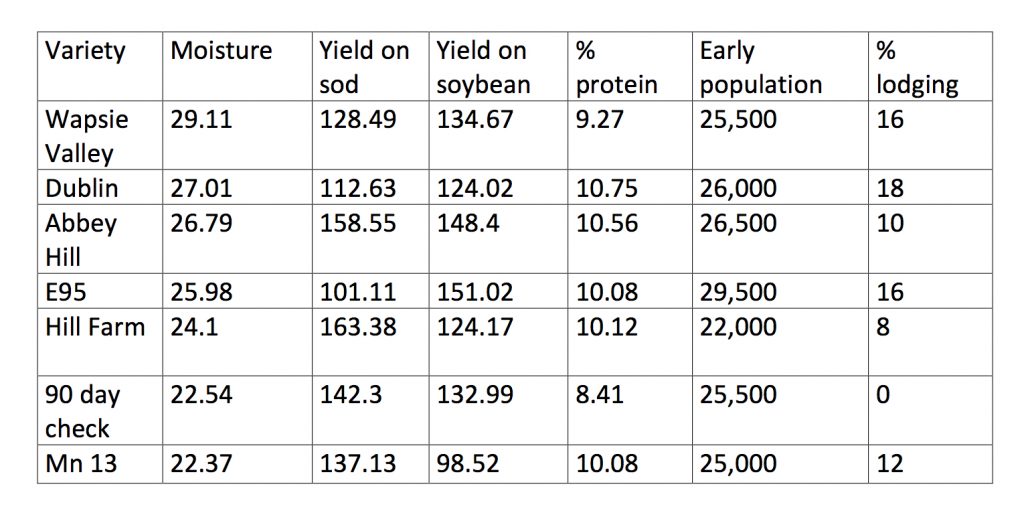