Melon and watermelon grafting for disease resistance in hoop houses 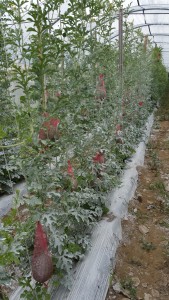 Hoop house production of high value crops is expanding in the Northeast.  With increased opportunity there is also increased risk of crop loss due to build up of soil pathogens.  Grafting disease resistant rootstock to high value and quality fruit scions has proven a successful approach in other regions of the world.  If disease resistance in these crops can be attained without affecting fruit quality through grafting, there would be an immediate and significant ecomnic impact for farms in the Northeast to expand hoop house production. Petra Page-Mann and Matthew Goldfarb of Fruition Seeds grew seedlings and grafted thousands of watermelons and cantaloupes, planting and evaluating them in replicated trials at Norwich Meadows Farm.  Michael Mazourek of Cornell University provided insight into the history and practice of cucurbit grafting, offered numerous disease-resistant rootstocks to evaluate and offered extensive technical advise throughout the season.  Zaid Kurdieh of Norwich Meadows Organic Farm assisted and innovated the grafting process, dedicated greenhouse space for the entire project, maintained clean fields throughout the season and evaluated melon quality at market. 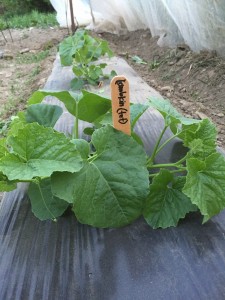 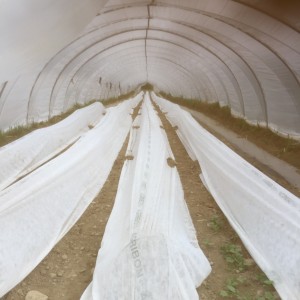 In January of 2015, Petra and Matthew were taught cucurbit grafting fundamentals from Michael at Cornell and determined planting schedules for appropriate grafting diameters of their trial seedlings.  A healing chamber was built at Fruition Seeds in March.  Seedlings were grown and grafted using multiple techniques in two successions in April.  We experienced issues with germination (especially some seedless watermelon varieties) that significantly decreased the number of plants per rep from 15 to an average of 7 (though some, especially the seedless watermelons, the sample size was too few to replicate), decreasing our desired observations but nonetheless offering us relevant comparisons.  Each trial rootstock-scion combination planting was replicated twice with two weeks between the two plants in two well-managed hoop houses at Norwich Meadows.  Petra collected bi-weekly data on plant vigor, fruit set timing and quality as well as disease type and percentage.  From our observations, Buttercup x Honeynut rootstock produced abundant, marketable cantaloupes more that other rootstocks, on average.  We did not observe any patterns in our grafted watermelons, which is not surprising from the limited number of grafts we were able to plant. In the Excel Spreadsheets, the scion selections are the left column and the rootstock selections are the top row.  The two reps are represented within a cell (first rep/second rep) and the two successions are labeled (a) and the second (b) on the top row.  Vigor (height and overall heath) was given an observation value between A and F, A+ being the most vigorous. Rootstock Abbreviations: Tetsekabuto (Tet), Buttercup x Honeynut (Bc x Hn), Blue Kuri x Honeynut (Bk x Hn), Bugle x Buttercup (Bu x Bc), Bugle x Honeynut (Bu x Hn) 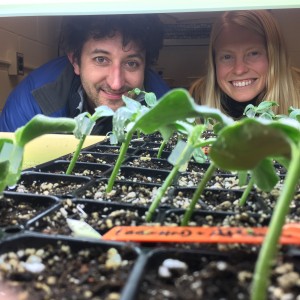 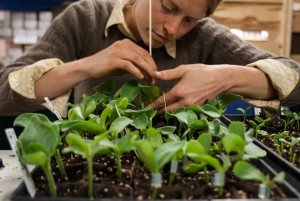 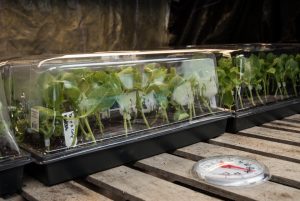 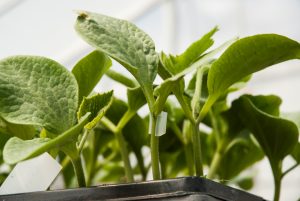 Norwich Meadows is incredibly enthusiastic with understandings gained from this project.  Zaid is expanding his cucurbit grafting in 2016 to include melons, cantaloupes and cucumbers.  He is continuing to experiement with rootstock-scion combinations and is dedicating more than 3 times the hoop house space than we grew in 2015. In January 2016, Zaid and Petra presented a hands-on cucurbit grafting workshop at NOFA-NY.  Michael Mazourek supplied 15 flats of rootstock & scion seedlings from the Cornell greenhouses.  Over 60 people were able to learn about and experience cucurbit grafting.  From both personal conversation and conference evaluations it was very well received. In May 2016, both Growing for Market and Small Farms Quarterly magazines are publishing 1200 and 700 word articles (respectively) by Petra about cucurbit grafting in the Northeast.