Our project tests the feasibility of growing and marketing organic Belgian Endive chicons, prized by restaurant chefs and retail customers, as a way for organic farmers on the North East to produce winter income.  We will document our methods and results and distribute them through SARE, conference presentations, on-farm demonstrations, and a booklet “How to Grow Organic Belgian endive in the Northeast”.  We have succeeded in accomplishing nearly all of the elements in 2016 needed to complete the project in the coming year as detailed below.   Because Belgian endive chicons are forced in the winter, we can only report on those aspects of the project that are to be completed by the end of the year.

The principal objective for 2016 was to produce organically the quantity and quality of Belgian Endive roots suitable for forcing as called for in our proposal.  We succeeded in doing so (described in detail in the “accomplishments/Milestones” section).  A secondary objective was to upgrade our existing forcing room and purchase or build the hydroponic and soil based forcing equipment.    We did not have a freeze until December 6th, and enjoyed a bountiful but time-consuming fall harvest.  This had led to a delay in insulating and up-grading our forcing room and obtaining our hydroponic equipment.  This work began the week of December 12th, so we will be a week or two after our initial target date of mid-December to start forcing the roots to produce the chicons.  However, since we harvested the roots several weeks later than planned (see below), we anticipate we will be able to successfully produce chicons for sale for the 12 weeks as planned. 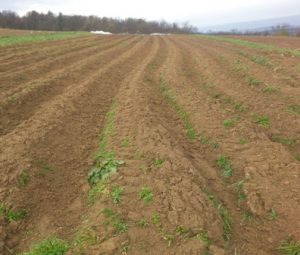 We obtained three varieties of Belgian Endive Seed (Totem, open-pollinated, and Atlas), the later after a lot of reaching out to seed companies, importers, and eventually the Netherlands-based producer. This took approximate 5.5 hours total.

We plowed and disked five seed beds in mid-April, each approximately 200 feet long, and in mid-May fertilized with OMRI approved organic fertilizer after a soil test, then formed raised beds approximately 30 inches wide and laid two or three drip irrigation lines on the beds.

We irrigated the unplanted beds in mid-late May to sprout weeds, then used a flame weeder prior to planting.  This turned out to be important because the fast germination described below would not have allowed for flame weeding after planting.

We seeded the beds on June 4th and June 7th after danger of frost but soon enough to allow the roots to grow to adequate size before fall harvesting.  We sowed two rows in some beds and three in others using a Jang precision seeder cartridge xy24, front sprocket 11, rear sprocket 11.  This turned out to be too close a spacing, necessitating extensive hand thinning after germination.  We encountered some difficulty since the cartridge has round holes and the endive seed is oblong.  Total time for bed preparation and seeding came to about 5.75 hours.

Germination was generally very good and faster than expected, two days for open pollinated, Atlas about four, and Totem seven. We hand weeded, hoed, and thinned on June 16 and 19, July 12, 19, 23, 29, Aug. 3, and Aug. 22.  We did a good job keeping up with the weeds (& have pictures to prove it).   Cultivating, weeding and thinning took a total of just under 26 hours. 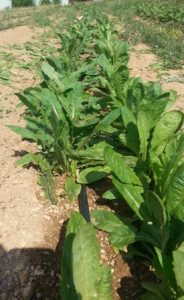 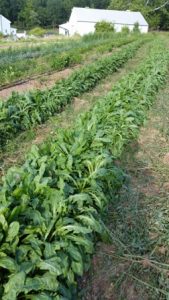 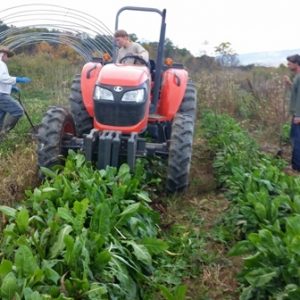 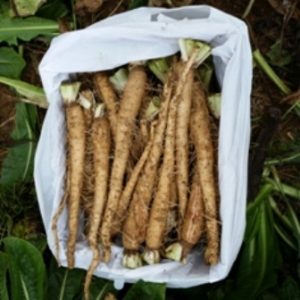 One of @80 boxes of roots suitable for forcing about to be stored in cooler, Oct. 24th.

We monitored moisture closely and irrigated when necessary.  Growth looked good, but the roots really began to size up from about mid-September to mid-October, a little later than we anticipated.  We began harvesting on Oct. 24th, and finished Nov. 5th.  Harvesting took place between 140 and 154 days from seeding, a little longer than the 140 day maximum time we said in our proposal.  A bar digger pulled by the tractor went under the raised beds to facilitate harvest.  This was very successful.  Almost no roots were broken, and harvesting was easy.  We discarded roots too small for forcing (i.e. less than the 1.25 inches diameter minimum required), trimmed the tops to between a half inch and an inch from the crown, packed the roots in plastic bags in wooden crates, and stored the crates in the walk-in cooler.  We harvested approximately 80 boxes of roots suitable for forcing, each weighing approximately 18 pounds each for a total of 1,440 pounds.  Our grant narrative spoke in terms of number of roots (not pounds) with a goal of having 2400 roots.  At the time of writing this report (Mid-December), the boxed roots are stored in our walk-in cooler.

We have consistently documented the process described above with pictures that will be part of our final report and included in the “How to Grow Organic Belgian Endive in the Northeast” booklet we will distribute, and will also be posted on the Jade Family Farm website and with the final SARE report and possibly on the Northeast SARE website.  Some of the pictures have been uploaded with this annual report.

We described above the generally good success we had in producing a good harvest of roots suitable for forcing.  Growing a good number of roots organically in the North East is feasible.

We have an inkling of what some of the most important lessons we have learned that will be part of our final report.  1.  The basic practices we used to produce suitable roots for forcing work pretty well.  2.  Seeders need to be set to avoid sowing too thickly to cut.  We will be looking into a different cartridge for next year’s crop.   3.  Just as many useable roots can be grown with two rows rather than three rows in each 30 inch bed.    4.  Plants need to be thinned to four to six inches consistently, something we did not always do.  5.  Our estimates of how long very thorough weeding and thinning were spot on, but harvesting took almost four times as long as we estimated (30 hours, not 8).  Harvesting time can be reduced in the future by sowing more thinly, by thinning to 4  to 6 inches, and by seeing if we can mow the tops mechanically before harvesting.

These lessons will help us calculate the financial return for the effort required, providing other growers with information they can use to decide whether to undertake producing Belgian Endive for winter income.

Our plans for next year have not changed from what we proposed.  No major problems arose that necessitate any big changes.  As noted, we will begin forcing a couple of weeks later and extend the end date of our forcing since we harvested our roots a little later than anticipated.  They will be suitable for forcing a couple of weeks later.  Consequently, the total income generated will not be affected.

If we succeed in producing marketable chicons that generate good income, which we think is likely, we will repeat what we did for the 2017 growing season.  This will give us a full year’s experience, including the forcing process in early 2017, so we can conduct a field day demonstration sponsored by the Pennsylvania Association for Sustainable Agriculture in January or February 2018.   We have already contact PASA and it has tentatively scheduled a field day during that time.