This project investigated whether Swede Midge (Contarinia nasturtii) inflicts less damage on selected cultivars of broccoli (Brassica oleracea var. italica).   Swede Midge is a gall-forming fly that feeds on the growing points of many Brassica crops, damaging the ability of the broccoli plant to produce a marketable head.

To do this, we planted two adjacent trials of eight broccoli cultivars. Plots were managed with typical northeastern certified-organic cropping practices.  Working with technical advisor Yolanda Chen her graduate students, we assessed plots for head damage and plant damage. While cultivars suffered differently, none of them presented true immunity when facing high Swede Midge pressure, though some were apparently better than others.

The objective for the project was to identify broccoli cultivars that were less affected by Swede Midge. At maturity we screened damage based on the Hallett scale of plant damage (a Swede Midge damage assessment scale developed by Dr. Rebecca Hallett of University of Guelph in Ontario) and also for head marketability using traditional market grading standards.

Production practices were standard organic vegetable farming methods common in the Northeast. Broccoli cultivars were chosen from varieties in commerce and available untreated. Intervale Community Farm is certified-organic, and the USDA National Organic Program production standards do not allow the use of seeds treated with synthetic compounds even for research purposes. This presented a problem, as my intention had been to trial the four varieties identified as ‘less bad’ by Dr. Hallett in her paper “Host Plant Susceptibility to the Swede Midge (2007).” As a result of the NOP prohibition on treated seed I was only able to use one of the better-performing varieties, ‘Everest’, identified by Dr. Hallett. I had hoped to have ‘Regal’ (Ferry-Morse); ‘Sultan’ (Sakata), and ‘Triathalon’(Sakata), all three having been identified as less damaged in Hallett (2007), but ‘Regal’ and ‘Sultan’ have fallen out of commerce and I could not source untreated ‘Triathalon’.

Aside from ‘Everest, I selected other cultivars after conferring with several broccoli experts. Dr. Thomas Bjorkman at Cornell was particularly helpful and supportive, identifying several cultivars that his work on behalf of the Eastern Broccoli Project identified as notably tolerant and resilient in eastern environmental conditions (‘Bay Meadows’, ‘Burney’ and ‘Lieutenant’). He also identified varieties that were the most widely planted in the Northeast (‘Diplomat’, ‘Emerald Crown’) and those he thought might be a good fit based on certain morphological traits (‘Imperial’).  ‘Bay Meadows’, ‘Gypsy’, and ‘Lieutenant’ are varieties ICF has grown in recent years.

Overall, I wanted to include a broad genetic base in the trials, so that we would cover more ground. Without a deep knowledge of broccoli genetics, as a proxy for diversity I sourced cultivars from several of the major broccoli breeding companies.

Broccoli cultivars ‘Bay Meadows’ (Syngenta); ‘Burney’ (Bejo); ‘Diplomat’ (Sakata); ‘Emerald Crown’ (Sakata); ‘Everest’ (Northrup King); ‘Gypsy’ (Sakata); ‘Imperial’ (Sakata); and ‘Lieutenant’ (Seminis) were started on 6/10/16 in 150 cell plug flats filled with Vermont Compost Company Fort-V potting soil. On 7/1/16 they were transplanted to the field using a waterwheel transplanter. Prior to planting, beds were prepared using reciprocating spader and field cultivator for tillage. A cover crop of 12” tall winter rye was incorporated on 5/23/16. Fertilizer of 1200#/A sunflower meal (4-1-1), 300#/A sul-po-mag, and 2#/A boron were incorporated prior to final tillage. On 6/21/16 we started a second round of transplants in the greenhouse, setting them in the field on 7/15/16. Greenhouse methods, field preparation, and plot fertilization were the same for both trial dates.

Twenty plants of each cultivar were transplanted in four rows, 36” between rows, 12” between plants, for a final plot size of 5’ x 12’. Cultivar plots were separated from others of their planting date by 5’ x 12’ plots of bare soil. 6/10 and 6/21 blocks abutted along one edge. Each of the eight cultivars was repeated four (6/10 planting) or five (6/21 planting) times. Each variety was randomly distributed within each replication of 8 cultivars. 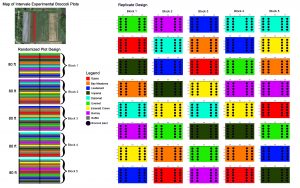 After planting, trial plants were weeded with tractor cultivation and hand hoeing at required intervals throughout the growing season. Plots were sprayed for flea beetles once with Entrust (Spinosad). Research by Chen and Hallett demonstrated that Spinosad has no measurable effect on Swede midge, so this did not likely upset the results of the trial. Plants were also irrigated as required, a frequent occurrence in this dry summer on our sandy loam.

Two Swede Midge monitoring traps were placed in the research plots to track population. Lures were changed according to recommended schedule. Unfortunately, we found after the fact that our lures were ineffective, having been compounded incorrectly at the supplier. Though the supplier, Alpha-Scents, refunded us, it is unfortunate that we have no population data to cross check with damage observations. Our UVM colleagues suffered the same fate in their use of the same lures. Visual observations of the plots, based on many years of looking at broccoli plants for Swede midge damage combined with observations of damage in the plots suggest that the overall Swede midge population was high relative to many other seasons.

Field research is complete, some data analysis remains along with the outreach.  Presentations are scheduled for this winter at the Vermont Vegetable & Berry Growers Association annual meeting in January 2017 and the Northeast Organic Farming Association of Vermont winter conference in February 2017.

Unfortunately for broccoli growers, we didn’t find a supremely resistant variety. That said, the preliminary data analysis points to some difference in cultivar susceptibility.

Prior to full maturity of the plants, we made a preliminary plant damage assessment using the Hallett scale. At the beginning of heading, we made a second Hallett assessment. The Hallett scale assesses damage on a four point scale (0 = no damage) of overall plant morphology: how much of the growing point of the plant has been affected by Swede Midge and the general health appearance of the plant. As growers, we were interested in examining head marketability specifically, partially to see whether there would be divergence from the Hallett scale conclusions, though mostly we wanted to focus on whether a grower could actually sell the broccoli head in question, the most important and relevant point for producers.

To assess head damage, plots were evaluated three times a week at maturity, an interval typical of our alternating day harvest schedule for autumn fresh-market, crown-cut broccoli. In each plot of 20 plants, all marketable, mature heads were tallied. Marketable heads were harvested in a typical fashion and weighed. Weights and tally from each plot were aggregated with other like cultivars for purposes of analysis. Marketability was determined by farmer experience, a seasoned but admittedly somewhat imprecise measure that includes head smoothness, bead uniformity, stem morphology, freedom from scarring, and a lack of bead rot. While some of these criteria could be influenced by other conditions (e.g. heat, insects, diseases), our dry conditions greatly reduced overall disease pressure, few other insects were present in large numbers (excepting flea beetles noted above), and the other symptoms (scarring, particulars of head and stem deformity) occurred in such manners that Swede Midge was the nearly certain culprit.

Preliminary results show that Burney, Lieutenant, and Gypsy produced somewhat more marketable heads than the others. Likewise, Diplomat was clearly the worst, with very few saleable heads in either planting. Imperial and Everest were minimally better. Interestingly, Everest was the one more-promising cultivar from Dr. Hallett’s earlier work. In the middle were Bay Meadows and Emerald Crown.

Head marketability is a subjective quality, and variation in my assessment may have skewed the data one way or another. Most important in the likely variation is that I was calling a marketable head anything with good morphology that was more than about 3.5” across the crown. This may well be too small for some crown cut growers, while it works acceptably for our CSA market. I have yet to examine total yield by weight. For us overall tonnage is somewhat less important: if we found a cultivar that ran toward the small side but had minimal Swede Midge damage, it would be an easy thing for us to increase our field plant population accordingly to compensate for the lower yield per plant. This would not work for all growers.

Likewise, while total marketable head tally paints one picture, timing of harvest shows different things. Some of the cultivars showed concentrated maturities when they produced marketable heads, and tailed off to either side, while other poked along with a few heads regularly over a longer period. Depending on the market, either of these two different patterns may be more attractive to any given producer.

We did not assess for underlying plant morphology difference, though this might be an interesting line of inquiry: are plants with more spreading habits, leafier habits, upright growth, darker green pigment, waxier leaves, etc., more or less susceptible as a rule? My hope for our research was that we would be able to see a common morphological theme among the better performers and seek out additional varieties with those common traits. This would be the best outcome from a grower perspective, as it would lead to easier identification of future suitable cultivars, but I was unable to draw any such conclusions with my untrained eye.

Lastly, it is unfortunate that our monitoring traps were impotent, as we cannot compare our 2016 Swede Midge levels with those Dr. Chen has from our fields in prior seasons. While our results show outcomes under what I believe to be high Swede Midge pressure, I can’t say that for certain. That said, many growers, our farm included, would likely use less-susceptible varieties in conjunction with other Swede Midge management strategies such as rotation (even if a short distance), timing of planting, row covers, and so forth. I would like to see how these cultivars behave when facing lower Swede Midge pressure, but again, this is only possible to assess when monitoring traps record a lower level infestation.

Yield data by weight still remains to be computed, graphs generated, and the final data analysis of the second plots, but most of the project research is complete. Economic impact analysis is also forthcoming, though with results of the field study being what they are, the positive economic impact will be somewhat limited.