This project aims to develop/evaluate a more efficient and economical way to propagate and transplant grape vines. Vines are normally planted using bare root or large potted vines either by hand which is very labor intensive or with a transplanter (some are laser guided) which can also be very expensive. This project will evaluate a method of propagating vines from smaller cuttings into cell plug trays and planted with a much less expensive water wheel transplanter. This method will be evaluated in a replicated experiment comparing it to a current standard method of vineyard establishment with hand planting. Outreach will take place through two field workshops during the season and a booklet available as either a printed or electronic version detailing the process and the results. This project has the potential for a sizable economic impact as vineyards are being established at increasing rates. I will attempt to quantify this impact by establishing cost savings using this method. There are hundreds of vineyards which could implement this method. It also could lead to new or existing nursery businesses growing vines in cell plug trays and possibly some new mobile planting services using this type planter.

The project looks to root and grow hardwood cuttings of hybrid grape vines in cell type plug trays to be later planted in a vineyard using a common water wheel vegetable transplanter. The cost to grow these vines will be compared to the cost of the same variety of vines purchased from a nursery.
** One point I will be emphasizing during this project, especially during outreach sessions, is that many grape vine varieties are protected by patents and royalty programs. The developers and breeders of these varieties have a lot invested into them and deserve to receive their payments. I will obtain any necessary permissions to propagate the vines as needed and pay all royalties due. All outreach participants will be expected to do the same.** 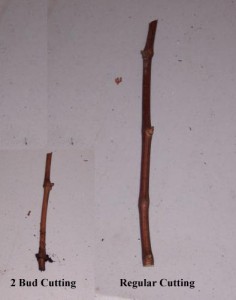 The process of planting 2 bud cuttings and growing into healthy vines is relatively easy with basic guidance.Propagation work will begin with collection of budwood to be used for cuttings. The buds need to be good viable buds not injured through winter cold, etc. The budwood desired will have internode spacing of two to four inches and no more. The shoots will be cut to manageable lengths for handing, bundles and brought back to storage for processing the cuttings. The cuttings will be selected from the most desirable buds in pairs of two. The proper cuts will be made to ensure the cuttings will be planted the right side up as they will not grow planted upside down. The lower cut will be made slightly below the bud node and will be a flat cut. The flat denotes the base. The cut above the second bud will be about three quarters inch above the bud on an angle. The cuttings will then be calloused which is necessary for root formation. This will take place on a heat mat which is temperature controlled. Once calloused the cuttings are placed into cell plug trays filled with a good rooting and growing medium. The heat from the sun hitting the black or dark gray plastic trays helps to promote root formation sooner. To monitor this heating I will use a soil temperature data logger. This will allow for constant monitoring of the soil temperature. The vines are then grown on in the greenhouse until ready to harden off for a week before setting out into the vineyard. All of the chores needed to grow the vines will be logged for time and notes kept of the activity performed. This way costs can be assigned to the growing of the vine to compare to a purchased price. Costs of the purchased vines will not reflect the royalties paid as the vines grown will pay the same royalty to the grower.

Objective number 2. Use a water wheel for transplanting the vines in the vineyard. A basic water wheel type planter can cost under $2000 and may be rented in some areas inexpensively as they are common in many vegetable growing areas. 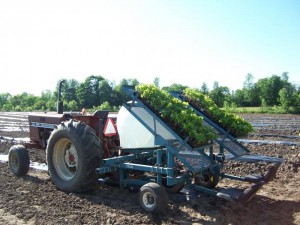 Land preparation will be the same for both plantings since they are in the same vineyard. Once prepared for planting the rows will be laid out using marking flags. The transplanter rows will only use a few flags for guides for the tractor to drive but the hand planted rows will require more marking for locating where to dig the holes for planting. and this time will be logged.  The vines being planted with the water wheel will be transported to the vineyard at planting time and loaded on the planter. There is one driver and two people riding on the planter placing vines in the planter holes. The planter uses water which it applies during planting. The hand planted vines will be placed with the roots spread out into hole dug with a shovel or auger for planting and the hole back filled. Again all operations have their time recorded to give a labor value to the operation. For this project I will compare expenses required for growing and planting the vines grown in plug trays and planted with the water wheel transplanter versus purchased bare root vines planted by hand. The planting itself will be made up on three rows of 40 vines planted with the transplanter and then a row of 40 bare root hand planted vines. This will be replicated two times for a total of eight rows. See the "Vineyard Planting" attachment at the end. I will also log progress of the vines as they grow during their first year of development. The measurements will be taken and recorded once a month. Information will be gathered on vine survival rate and overall growth that first year. This will help quantify any major growth differences between the two planting methods. The vines will be monitored for growth and disease during the growing season and all information logged. Normal vineyard operations such as mowing or weed control will take place. At the end the project will also cover a cost comparison between using the cell plugs/planter and hand planting of purchased bare root vines.

The project will run from March 1, 2016 until December 31, 2016. Work will begin with the project leader or vineyard assistant performing bud wood collection at some point in March 2016 depending on weather conditions (cold) and some snow melt. Cuttings are then cleaned and prepared into their two bud cuttings. The cuttings are calloused soon after and placed into filled 38 cell plug trays. The plug trays are then placed in a greenhouse where they receive minimal supplemental heat and adequate water. Soil temperatures will be monitored with a soil data logger. The first field workshop will be held in Mid April so that the first few operations involving the cuttings can be shown . The cuttings will then grown on during April and May. Around late May to the first week of June, the vines will be removed from the greenhouse and hardened off for a week or two before planting. Soil preparation will take place in April and May again performed by the project leader or the vineyard assistant. A composite soil sample will be taken for analysis and any required fertility additions added prior to working the soil to better incorporate it. The grasses and weeds will be killed from the current sod and thoroughly worked into the soil to build organic matter up. This will be done with multiple passes with either a tiller or harrows. Shortly before planting some form of mulch will be laid down. Either a thin black plastic mulch or a black paper mulch will be used to control weeds, maintain a higher soil temperature and conserve moisture. Planting using both methods will take place in early June and another field workshop demonstrating that will be held at that time. After marking out the respective rows (for the transplanter and hand planting) the vines will be planted. The time required for both methods will be recorded as well as logging the size of the required planting crew to assign a labor value for the planting. The crew will consist of the project leader, vineyard assistant and temporary planting assistants as needed for the particular planting method. The vines will be monitored during the remainder of the growing season and information gathered to include the daily temperatures, amount of growth per month, mortality rate and overall vigor of the average vines. This data will be collected and recorded by either the project leader or vineyard assistant. The project leader will create a field guide to cover all aspects of the growing of vines in the cell plugs and the planting of the vines comparing machine planting and hand planting which will be available to other growers as either a printed booklet or an electronic file (pdf). This will be created in the autumn of 2016 and disseminated as covered in the outreach section.

Workshop 1. Propagation. This workshop will cover all the early aspects of the project including bud wood selection and procurement, storage if taken in fall the year before, preparation, callousing, sticking out, rooting and growing the vines. The project leader will conduct this workshop and may be assisted by the Technical Advisor Anna Wallis. This will give other growers the basic skills needed to implement their own propagation into plug trays.

Workshop 2: Transplanting. In early June there will be another field workshop demonstrating the planting using both the transplanter and planting by hand. This may be conducted either at the new vineyard planting at Hid-In- Pines Vineyard in Morrisonville (project leader Richard Lamoy) or at a collaborating farmer site of Jay and Sarah White of Essex NY. They have agreed to try out this system at their vineyard. That site will give a wider base of vines for other growers to visit throughout the growing system. Booklet Publication: Another aspect of the outreach program includes preparing a manual both in printed and pdf format covering the whole planting system. This will summarize all steps used in this system and give a quick summary of the end results obtained. It will be complete enough including pictures so that other vineyard growers may use it as a how- to manual for doing their own plantings. VineyardlayoutFinal