This project will evaluate the impact of applications of manure and forage radish on soil compaction in an established hay field and pasture. Using a no-till drill the forage radish will be applied using readily available equipment during ideal growing windows without the use of tillage which would remove the field and pasture from normal use.

The project participants include farmers, Abby Sadauckas and Jake Galle. Jake is the primary equipment operator on the farm and as such operated the no-till drill. Both farmers worked with technical advisor, Katy Green of MOFGA to take soil tests and to perform soil infiltration tests.

The control and test plots of the hay field (Williams Field) were soil tested in the fall of 2015. Results of those soil tests came in February 2016 and were used as the baseline data for the project. On April 22 Katy Green came to the farm to conduct additional soil tests on the control and test plots in the East Pasture. The results of these tests were returned in May of 2016. It was decided to use rotational grazing in the East Pasture to apply needed fertility. Soil test results for the Williams field and for the East Pasture are included using the hyperlinks.

On May 26th the farmers, along with their technical advisor competed soil infiltration tests. Using page 7 of this document as reference the farmers performed and recorded infiltration readings from four random plots in each of the control and test plots of both the hayfield (Williams) and the East Pasture. Results were recorded in a spreadsheet, Data Collection – Infiltration baselines. The results supported the hypothesis that compaction exists in both fields, however the rate of infiltration was extremely slow in the East pasture and indicated even more compaction than anticipated. 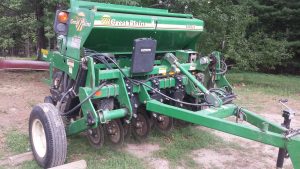 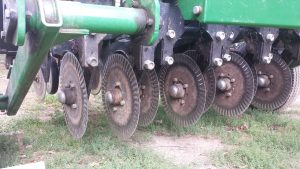 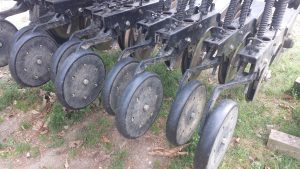 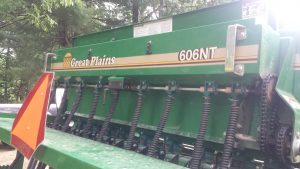 On July 4 hay was baled in the Williams Field. At this point in the season the farmers decided to get the no-till drill and apply the tillage radish as soon as possible due to dry weather and rain forecasted for the following week. The farmers planned to spread manure after seeding when able. On July 14 Jake seeded Williams Field using a Great Plains 606NT drill part of the Maine Grass Farmers Network (MGFN) shared use equipment pool. Jake ran the drill north to south with hopper at 50%. He then ran the drill east to west with the hopper at 65%. The drill’s coulters were set at a depth of ½”. On July 17th approximately a ½” of rain fell on the field. Plans to spread manure were put off as the weather continued to be dry without rain fall for over a month and a half.

In the East pasture our ewes rotationally grazed through the test plot from July 13-15. Then they grazed the control plot from July 15-18. Following their grazing Pete Galle (Jake’s father) clipped the test plot to ensure consistent stubble length. On July 19 Jake seeded the test plot using the no-till drill at depth of 1/2″.   Again the drill was pulled East to West and then North to South to cover the entire test plot. The hopper was set at 70% open.

After seeding several groups of broilers were rotated through both the control and test plots during the window of germination (beginning August 1st). Following the broiler rotations the radish was permitted to grow until the lambs and kids began rotations through the test plot from September 30 – October 12. During this time they removed the leafy portions of the plants leaving the radishes in the ground and any portions above ground. The farm’s laying hens moved into the test plot on October 20 where they remained into November. In photos (below) from November 5th and 8th it can be seen that the hens began to remove radishes from the ground and/or began eating the in-ground radishes. Where leaves collected on the edge of polynets the radish continued to grow, protected from frost. 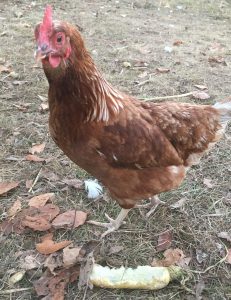 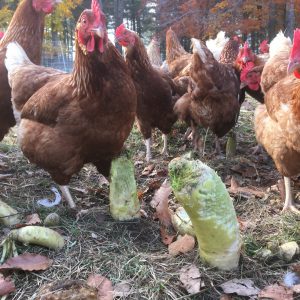 This season was a challenging one given the lack of rain. This certainly impacted the results of the project overall. The results of the planting varied dramatically between the two test fields. In the off-farm hayfield  (Williams field) hay was taken off earlier than anticipated, this allowed the farmers to get the field planted by mid-July. In a normal year this would have allowed ample time for substantial growth. Due to the dryness though the germination was delayed. 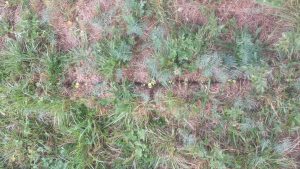 Germination was noted on August 6 and subsequent growth was minimal. 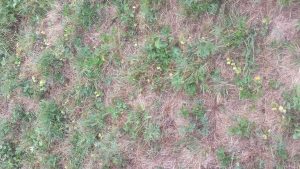 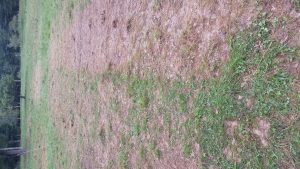 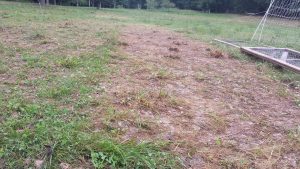 In the East Pasture the farmers were able to clip the field prior to planting and then run broilers through it both before and after planting (see narrative above). The added fertility of the broilers and mulch provided by clipping enabled rapid germination and significant growth of the radishes, despite the noted compaction. The growth and coverage in the field was not uniform and certainly reflected the movements of the broilers and their shelters through the pasture. The forage provided by the radish proved extremely valuable as little of the farm was available for grazing due to dry weather.  Sagadahoc County, where the farm is located was designated a primary natural disaster area on October 7, 2016 due to the drought.

Photos of all of grant related activities can be seen at the following link: https://goo.gl/photos/Qmju4rhw5LuHyiYm7