Soil analyses for RSOM, SMB and Dehydronase activity have been conducted. Establishment of sorghum treatments were affected by rodents, demonstrating that Sorghum is not adequate for use at our farm.

The objective of this project is to determine as a function of Cover Crop usage on plantain crop systems: 1) soil RSOM formation rates; 2) soil microbial biomass (SMB); 3) Dehydronase activity.

SMB and Dehydronase analyses are conducted at the Universidad del Turabo School of Natural Sciences and Technology Laboratories.

At, present we are reporting for Total Organic Carbon, as we have not been able to conduct all analyses for establishing RSOM due of the laboratory limititations.

Native Microbiota: Microbiota native to the samples taken were analyzed using the technique of most probable number (MPN), from which an estimated population was obtained (Figure 1). Among the samplings can be seen an increase in population from before planting to after planting.

Characterization: DNA phylogenetic analysis has allowed identification of possible prospects and as well as how they change over the course of planting cover crops. 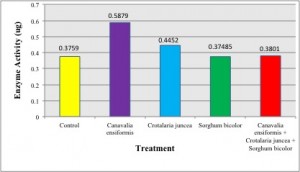 Dehydronase enzyme activity (DHA) was higher for Canavalia treatment. No significant difference was observed between other treatments. 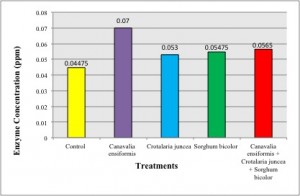 In conclusion, data demonstrates a contrast with the effect of cover crops presence on the measured aspects. For example, there is a reduction in TOC in the Crotalaria. However, TOC accounts for labile carbon, so recalcitrant carbon values are needed in order to reach conclusions about the effect of cover crops. This coincides with a higher Soil Biota activity as demonstrated, which could be using the labile carbon portion.

On the other hand, the evident improvement on-field performance of Canavalia treatment over all other treatments, demonstrates the highest TOC and Dehydronase values.

At the UPR-Humacao Environmental Microbiology Laboratory Dr. Francisco Fuentes along with undergraduate students have been isolating native nematophagous fungi from the experimental plots. 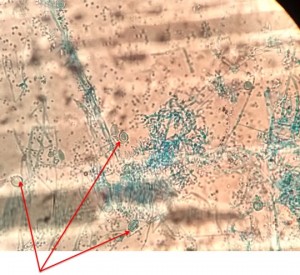 This project has benefited from the active participation of graduate and undergraduate microbiology students from two universities that are not specialized in agriculture (Universidad del Turabo and University of PR at Humacao). These nine microbiology students have been very motivated to apply their areas of study to Puerto Rico’s agricultural industry in tangible ways. They are positioning themselves as well qualified contributors to PR’s agricultural development. This is very important as sustainable agriculture R&D in Puerto Rico would benefit significantly by multidisciplinary and Inter-Institutional contributions. This project serves as a model for achieving this effort.

The long-term benefits from this project will be to: