Investigations for an organic cultivation method that allows for year-round harvesting of asparagus in South Texas resulted in some success via the ‘cut back and harvest’ method. Under this method, asparagus ferns are pruned back every two months to try to extend and maintain a continuous production of asparagus throughout the year. As the new spears emerge after being pruned, they were harvested for the two-month period. Furthermore, five cultivars of asparagus were examined to determine which perform better in South Texas weather conditions. Based on this past years results, the cultivars from best performing to least performing based on total asparagus spear yields were; Jersey Supreme, UC 157, Mary Washington, Jersey Knight, and Purple Passion.

To introduce asparagus to a larger portion of the American market requires the development of reliable methods that will allow for the production of larger quantities that a grower in the South can market over the entire growing season. Asparagus is not grown commercially in the South because of hot weather conditions and a limited production period. This research will test five cultivars of asparagus for heat tolerance and will try to establish organic cultivation methods for asparagus in South Texas, and other warm areas of the South, that might provide year-round production.

This project’s three research objectives will be carried out simultaneously over the course of four growing seasons (two years) as follows:

Develop an organic cultivation method that allows for year-round harvesting of asparagus in South Texas.

3. Disseminate findings to local growers and growers throughout the South through outreach efforts.

During November 2014-October 2015, trials for the organic cultivation methods for asparagus were conducted at a cooperator farm located near Lyford, Texas. Five different cultivars of asparagus were planted in five different replications at the Cooperator's field in February 2013. Each replication contains five plants of each cultivar. The asparagus ferns have been allowed to grow, under organic conditions, continuously since planted.

To mimic the die-back of ferns that occurs during dormancy in colder climates, asparagus ferns in the trial were cut below the soil surface every ten months. The replications were pruned back successive  ely every two months to try to extend and maintain a more continuous production throughout the year. As the new spears emerge after pruning, they were harvested for the two-month period. Each asparagus replication of five asparagus cultivars was, and will continue to be, pruned every 10 months (at two-month intervals) during the two-year project period. Limiting production to one harvest every ten months allows the underground crowns to store more energy and produce a larger harvest the following year. This cultivation method proved to be successful for this year’s trial. As described in Figure 1, every month, with the exception of January 2016, yielded asparagus production; however, there was considerable seasonal variation in production. The month that yielded the highest number of product was June 2016, with 325 total asparagus documented from the five cultivars. 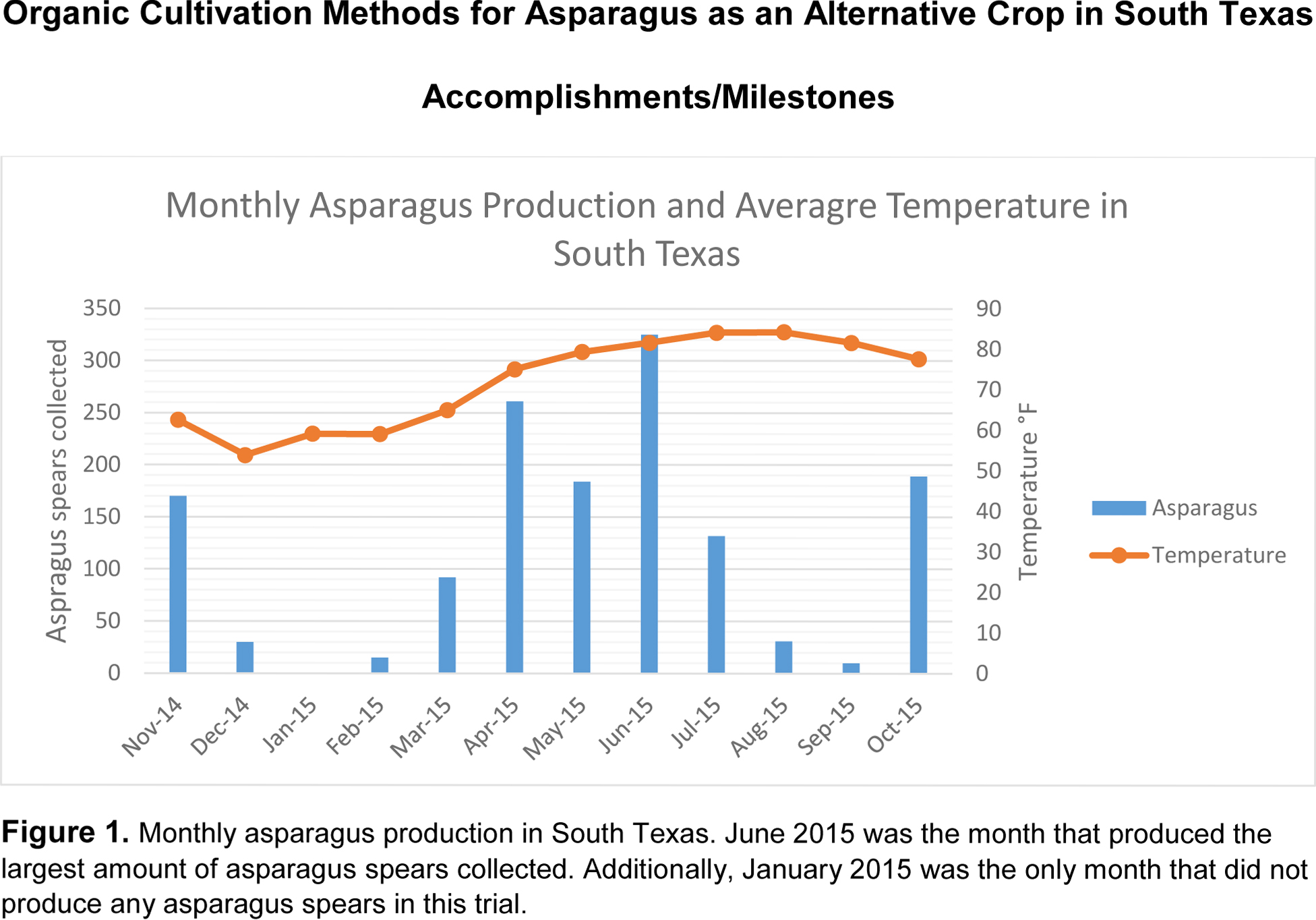 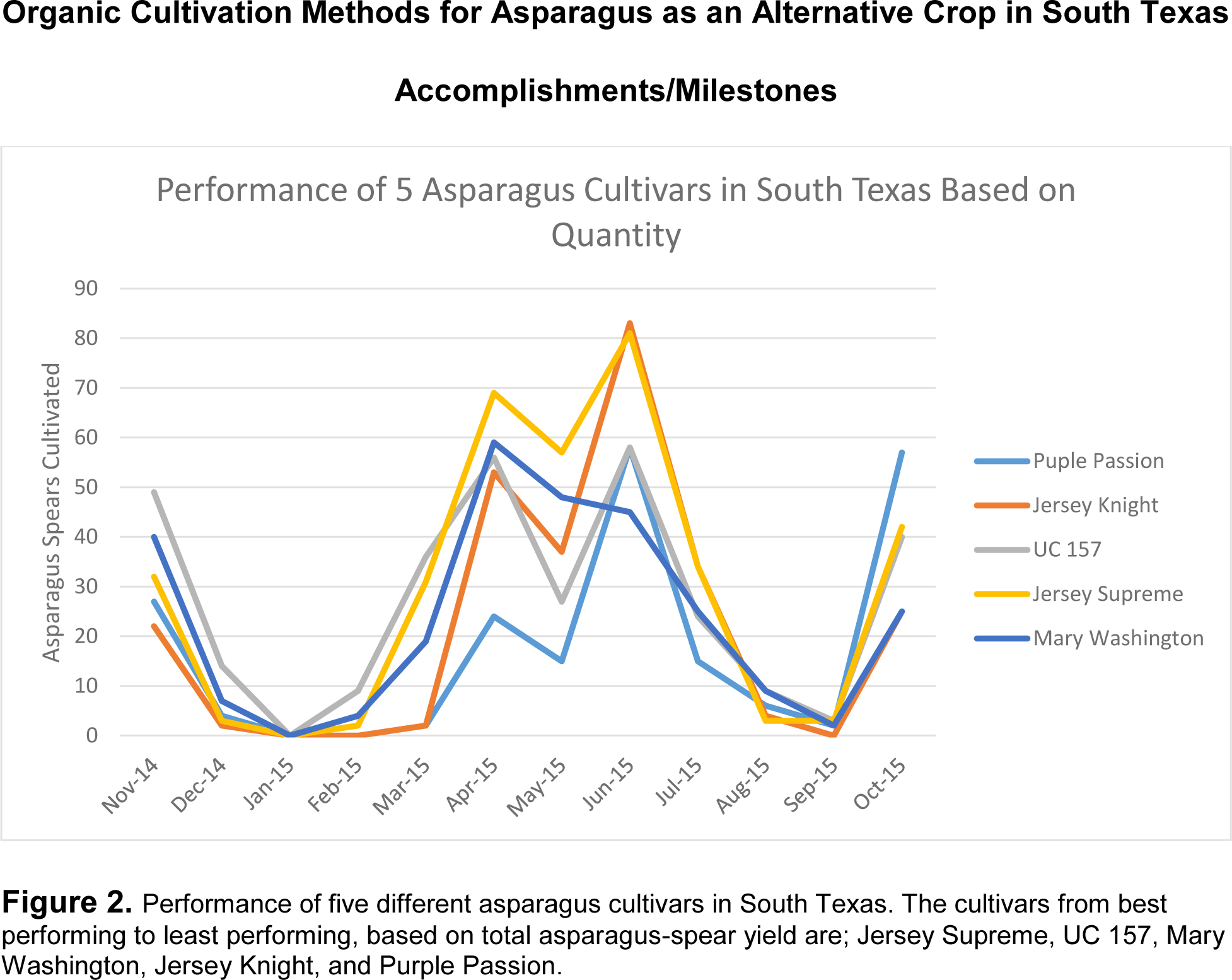 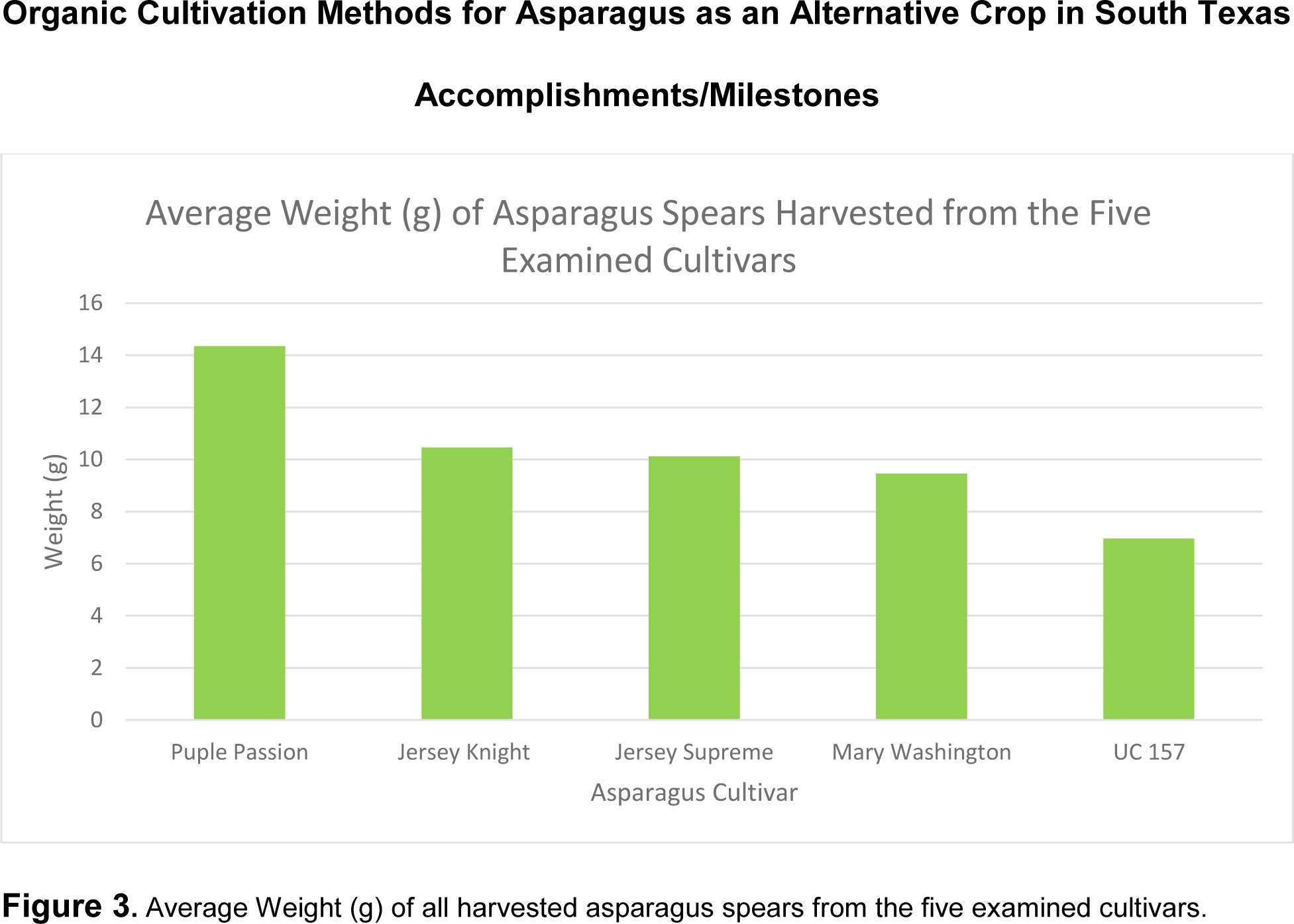 During this year’s trial, the examined ‘cut-back and harvest’ method yielded positive results under organic conditions. Under this organic cultivation method, asparagus was harvested every month throughout the year, with the exception of January 2015. However, as the graphs in this report show, there was considerable seasonal variation in asparagus production. Whether it is economically viable to produce asparagus during the lower-production months will depend on seasonal price points. Such results provide valuable information with regard to asparagus production in areas of the South. This past year’s trial suggests that asparagus has the potential to be grown commercially in hot weather environments and also depicts asparagus as a product that has a favorable production period, though not year-round.

In addition, this year’s trial isolated and distinguished better preforming asparagus cultivars under organic conditions in the South. The cultivars from best performing to least performing, based on total asparagus spear yield are; Jersey Supreme, UC 157, Mary Washington, Jersey Knight, and Purple Passion. This distinction of cultivars, along with the cultivation method examined, will provide small-scale growers in South Texas, and other areas of the South, the methods they need to successfully grow asparagus and help them sustain the economic viability of their small farms by allowing them to direct market their asparagus over an extended season.

The cultivation and documentation of data is ongoing and will continue into the next trial to further establish results. The results of this research project will be publicized through five venues—the TMBC website, video production and broadcasting, training events, a presentation at the Southern Sustainable Agriculture Working Group (SSAWG) conference, and a published article.