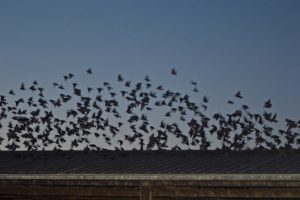 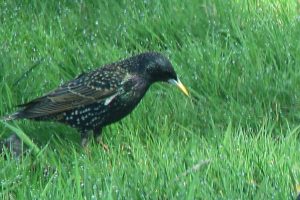 European starlings are an invasive species in North America

The purpose of this study was to examine possibilities for natural predators, primarily native birds of prey, to serve as biocontrols for pest birds and rodents on Washington dairy and berry farms. We estimated bird and rodent damage on dairies in Washington State through farmer surveys; performed bird counts on 10 Whatcom County dairies within <1 mile of fruit crops; implemented measures to enhance the presence of native birds of prey in Whatcom County agricultural areas; introduced and encouraged bird abatement falconry on dairies; worked on youth, farmer, and general public outreach highlighting the ecosystem services of farmland birds; hosted a conference and an on-farm demonstration related to agricultural birds; created and posted an educational video about using native raptors and trained falcons for nuisance bird control; developed and distributed a laminated bird ID card; and successfully collaborated with additional researchers to build a longer-term project as we realized the scope of the problem of European starlings on dairy farms.

Wildlife damage to fruit crops in Washington and Oregon has been cost-estimated from $400- $3000/acre/year in grapes, cherries, blueberries and apples (1). With expansion of blueberry acreage in Whatcom County and other western Washington counties over the past decade, dairies are increasingly located adjacent to blueberries. The invasive European starling is responsible for much damage to both fruit and stored dairy grain and forages, but other birds and rodents are also implicated. Though not rigorously examined previously, estimated losses to dairy operations range from $2000-$10,000/herd/year or more with a typical 1,000-bird starling flock easily consuming a ton of silage each month (2).

The pattern for starlings includes roosts at dairies, where high energy foods are available at open faces of bunker silos, in grain rations fed to cows in feeding areas, and in manure lagoons. Starlings on dairies contaminate feed, water, and housing year-round, and eat and contaminate fruit during blueberry season. They also damage silage tarps. Similar patterns may be seen where livestock feeding occurs near other fruit crops (e.g. beef feedlots/dairies near Yakima cherry orchards in eastern Washington).

Rodent problems include rats eating corn and grain on dairies and chewing silage tarps and wiring, and voles chewing roots and bark in fruit crops (3).

Use of scare tactics such as propane cannons and bird distress calls are widely perceived to be ineffective; these measures also disturb farm and non-farm neighbors. Lethal management methods include trapping, shooting, and poisons. Farm employees may have little time or ability to distinguish between "pest" and "beneficial" birds, sometimes using a guiding principle that "the only good bird is a dead bird." Starling and rodent traps can remove individuals but may inadvertently trap beneficial birds such as swallows and raptors, or harm other non-target species. Poisons have potential to move through the food chain, harming beneficial species such as raptors and even domestic cats and dogs (4,5).

The intent of this project was to quantify the extent and impact of bird damage on dairy farms. Using interview and survey tools, we quantified annual feed losses attributable to birds (feed consumption and fecal contamination) and time and money spent on shooting, trapping, poisoning and other techniques. Adjacent blueberry growers were also interviewed about damage.

We connected area falconers to dairy owners willing to allow falconers access to their facilities. Placement of carrion (undiseased dairy placentas and stillborn calves) for natural decomposition in sufficiently isolated fields (under Washington State Department of Agriculture regulations) was tested as a means of keeping natural predators in the targeted study area.

Cessation of rodenticide use was requested on participating dairies to minimize risk of secondary poisoning or trapping of raptors. Dairy owners and employees were provided with bird identification instruction to prevent shooting of beneficial and non-target species. We also encouraged adjacent fruit growers to discontinue rodenticide use and shooting of non-target birds.

Bird counts were taken at each of the chosen dairy field sites. Each dairy farmer was asked to estimate damage levels and perceptions of effectiveness of the various techniques attempted. Based on these numbers (pest counts, farmer estimates of damage, and farmer perception of effectiveness), a few techniques were selected for highlighting at a conference and a demonstration event to which area dairy producers were invited.

The scope of the problem was so much greater than anticipated that a second and larger WSARE Research and Education grant project was created to measure bird impacts on cow welfare. This project is now successfully underway in conjunction with WSU and USDA/APHIS collaborators.

The expectation of this Farmer-Rancher WSARE project was that enhancement of habitat for birds of prey, or other means of providing "natural" controls for pest birds and rodents, could prove economically beneficial for farmers, while reducing direct and indirect mortality of raptors and other beneficial species (6,7). Farmers were able to envision economic benefits of native raptors and biocontrols, increase public perception of the value of agriculture for wildlife species, and improve the overall quality of rural community life through these efforts.

3. Ashkam 1988. A two-year study of the physical and economic impact of voles on mixed maturity apple orchards in the Pacific Northwestern US. Proceedings Vertebrate Pest Conference 13:151-155.