2015 was the second year of our project and the year in which most of the data would be collected on our project queen honey bees.  Overwintering strengths, cluster size in the spring, and the relative strengths and weaknesses of the colonies would be determined with each colony in the three producers yard.

Unfortunately, two of the producers lost significant colonies during the winter of 2014-2015 which limited valuable data to be collected in late May from their colonies.  Those colonies that did survive the 2014-2015 winter were tested for hygienic behavior, natural 24 hour mite drop, an alcohol wash to determine additional varroa mite levels, and varroa mite fertility ratios. 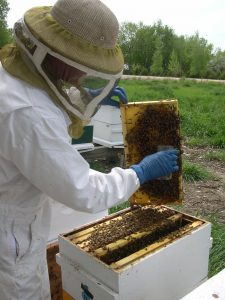 Upon completion of these tests, selections were made for breeder queen candidates to be used for propagation.  Virgin queens were again distributed to Colorado beekeepers who wanted to participate in our Virgin Exchange project the last week of June, 2015.   Additionally virgins were also added into the producers yard for additional testing for 2015-2016.

By September, our colonies 2015 honey production totals were added to our earlier collected data.

Kris Holthaus, chief investigator, gave a presentation of our findings and experiences at our Western Apicultural Society gathering in October, 2015.

While our project was originally meant to conclude in the fall of 2015, Kris Holthaus will continue for an additional year into 2016 to provide additional feedback on her surviving colonies.

Our main objectives in the spring of 2015 were colony testing for brood disease, hygienic behaviors, and varroa mite resistance.  Through strict testing protocols we were able to identify those colonies that genetically were superior. With the collected data, we were then able to make careful selections and maximize our own propagation of those colonies that show a superior ability to withstand the current pests and diseases, specifically varroa mites. 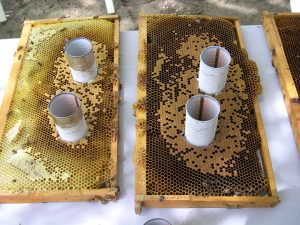 By the end of May, 2015 we had thoroughly tested the surviving colonies in two of the producers yards…We were able to identify the strongest performers and make available virgins from our best surviving stock to participating Colorado beekeepers.

We were also able to share our project with beekeepers throughout the Western US at our  Colorado State Beekeepers Association summer meeting and our Western Apiculture Society Conference in Oct. 2015.  This was important in that other states will now be able to recognize the source of many of our top performers.

While it was disappointing losing the large number of project colonies in two of our producers yards, it does show the difficulty in beekeeping today.  Varroa mites remain our number one pest.

However those colonies in the Ft. Collins apiary have showed a variety of strengths and the ability to be productive.  Selections from these colonies will continue going forward into 2016.  An additional source of genetic material will also be added in 2016.  It’s taken 2 years of wait list to finally receive these queens which I know will be a valuable addition. 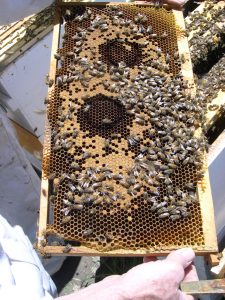