The summer season of 2016 marked the second year of trialing “Inherding” as a viable way to meet the growing complexities of grazing cattle on public (and private) rangeland. In concept, “Inherding” is quite simple. Rather than managing cattle with a “keeping out” paradigm and working to exclude livestock from sensitive areas, cattle are herded intensely to keep them “in” areas that have lower environmental sensitivity. 2016 trials also focused on whether herders could successfully target areas to be grazed, and if so, evaluate the potential of inherding to use targeted grazing to meet ecological objectives such as brush cover reduction.

Inherding trials were funded in 2016 by this SARE grant, a grant from the Central Idaho Rangelands Network, and matching funds from Alderspring Ranch.

The location for the Inherding Project is a 48,000 acre public range allotment consisting of Forest Service and Bureau of Land Management permits. Alderspring Ranch (Glenn Elzinga) is the sole permitee. The Allotment is remote, difficult to access, and difficult to manage due to steep topography and a number of conflicts that align with similar conflicts range managers are facing throughout the west: wolf reintroduction and pack increases causing increasing interactions with domestic livestock, fish listed under the Endangered Species Act, extensive riparian areas and many isolated riparian and spring “islands” essential for wildlife, potential big game wildlife conflicts, and recreation and hunting conflicts.

The summer season of 2016 also marked the addition of enforced standards and guidelines for grazing on public rangelands with sage grouse habitat as part of permit compliance. Based on our experience in the past with this allotment and others, it will be very difficult for permittees to meet these standards using old management tools. (See uploaded Forest Service 2016 Operating Plan for the Hat Creek Allotment fseprd508995 ).

The concept of “inherding” is an extension of the management intensive grazing paradigm that has been adopted by innovative stockman to increase forage production, vegetative health, and animal performance on pastures. In this management strategy, electric and permanent fencing is used to control animal movements, moving them as much as every day. This proposal extends this concept, but utilizes herders on horseback to control animal movement rather than fencing.

A complete listing and description of proposed activities and objectives under the SARE grant for the Inherding Project are given in the original proposal. These were successfully followed in the 2016 season. In brief, the objectives were as follows:
• Train staff in ecological principles, stockmanship, horsemanship, monitoring, and horse packing.
• Implement ecological monitoring on the allotment to access ecological success of inherding.
• Implement herding and assess level of control by herders.
• Identify issues associated with Inherding, and potential solutions.
• Track costs and benefits in order to economically assess Inherding as a potential viable tool for range managers.
• Coordinate with stakeholders and potential partners.
• Disseminate information.

Each of these is discussed in the next section.

This was considered relatively successful. For 2017, we are planning additional training in all of these areas, especially targeting further education in monitoring and ecology.) Ecological understanding was the greatest staffing shortfall; getting the team to grasp the functionality of rangeland systems was difficult. 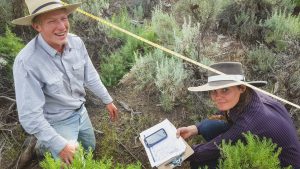 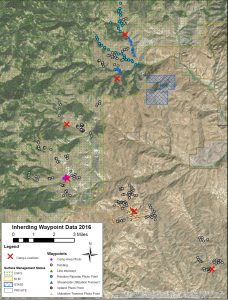 This was considered a complete success. No cattle were lost, cattle were controlled 100% throughout the entire grazing season, no predation or wolf interactions occurred, and no unplanned use of riparian or spring areas occurred.

These will be discussed in the final report. Throughout the summer notes were maintained on logistical issues and solutions suggested by the crew. Each crew member also had a lengthy closeout where suggestions for improvements were captured.

Costs were tracked both in terms of labor and in terms of supervision and equipment costs. These will be detailed in the final report.

During the field season, we held two well-attending field tours (20-35 individuals at each), in spite of the remote location. Attendees included other permitees, agency personal (including the District Ranger), a representative from the Idaho Office of Species Conservation, local county employees, a grazing consultant, and several young technicians. 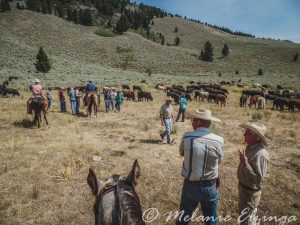 We spent a day with each of two journalists. One has already written stories about the project, and the second is planning a story for this spring. We have another journalist interest in the project that would like to interview us. We gave presentations to the Central Idaho Rangelands Network (with attendance by representative from the Lemhi Regional Land Trust, the Wood River Land Trust, and The Nature Conservancy), and to the Idaho Center for Sustainable Agriculture annual conference to an audience of over 100. Additional presentations are planned with the Forest Service, the Bureau of Land Management (both at the local and state/regional level).

We exceeded all Forest Service and Bureau of Land Management standards and guidelines for 2016. Forest Service and Bureau of Land Management employees and managers are very interested in our project, and are on board to partner with us during the field season of 2017. The Forest Service conducted additional monitoring to ensure that we were actually meeting our objectives, and were pleased with the results. They plan to use this allotment as a test allotment for sage grouse habitat assessment and monitoring, expanding on the partnership we established with them over the past few years.

Five operators from a 3 state area are asking for guidance from us on how they can implement the inherding concept on their ranges in 2017. We hope with the additional press in the next few months that we will have more interest.
A few members of the Central Idaho Rangelands Network were so interested in the project that they proposed we develop an “ecological range rider” job description and proposed curriculum to bring to state universities.

We have been working with GIS technicians at The Nature Conservancy to develop mapped products of the monitoring completed during 2016. We are also working on a cost benefit analysis of the project. These numbers, as well as suggestions for ways to reduce costs, will be part of the final report.